CRT is an academic framework centered on the concept “that race is a social construct, and that racism is not merely the product of individual bias or prejudice, but also something embedded in legal systems and policies” (Education Week, 18 May 2021). Scholars of CRT argue that many of America’s formal institutions are inherently racist, as they create and maintain structures of inequality based on race (Encyclopaedia Britannica, 16 June 2021). Conversely, opponents of CRT argue that it is rooted in Marxism, promotes anti-white racism, and demeans Black Americans (Texas Public Policy Forum, 6 May 2021).

After former President Trump singled out CRT as the “target of an executive order” in September 2020 (USA Today, 20 January 2021),2Current President Joe Biden has since rescinded the order (USA Today, 20 January 2021). legislation designed to ban CRT in public schools has been passed in Idaho, Iowa, New Hampshire, Oklahoma, Tennessee, and Texas. Another 16 states have proposed or prefiled legislation designed to ban the teaching of CRT in public schools. The map below depicts these trends. Teachers unions and education policy analysts, meanwhile, have noted that CRT is predominantly taught in colleges and law schools, not elementary schools and high schools, suggesting that anti-CRT legislation “is really aimed at erasing and whitewashing American history” for young students (CBS News, 8 July 2021). 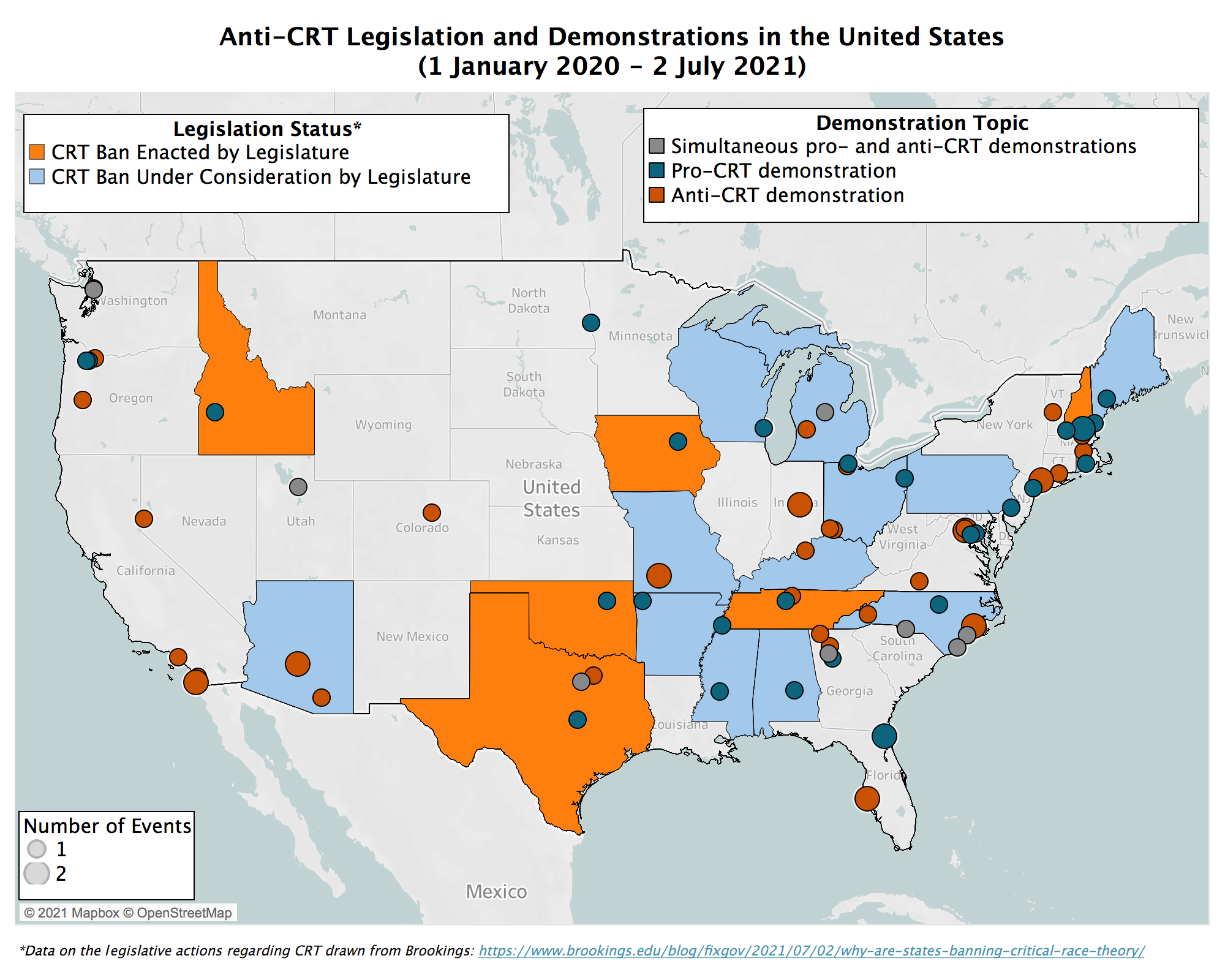 The frequency of demonstration events focused on CRT has been strongly correlated with media coverage and debates over CRT-related legislation. For example, three states passed bills designed to ban CRT from public schools in June 2021 — the same month in which a majority of CRT-related demonstrations took place. A combined look at analysis of ACLED data (bars in graph below) and Media Matters analysis of CRT mentions by Fox News (line in graph below) shows a powerful correlation between increased demonstration activity and increased negative media coverage (Media Matters, 15 June 2021). 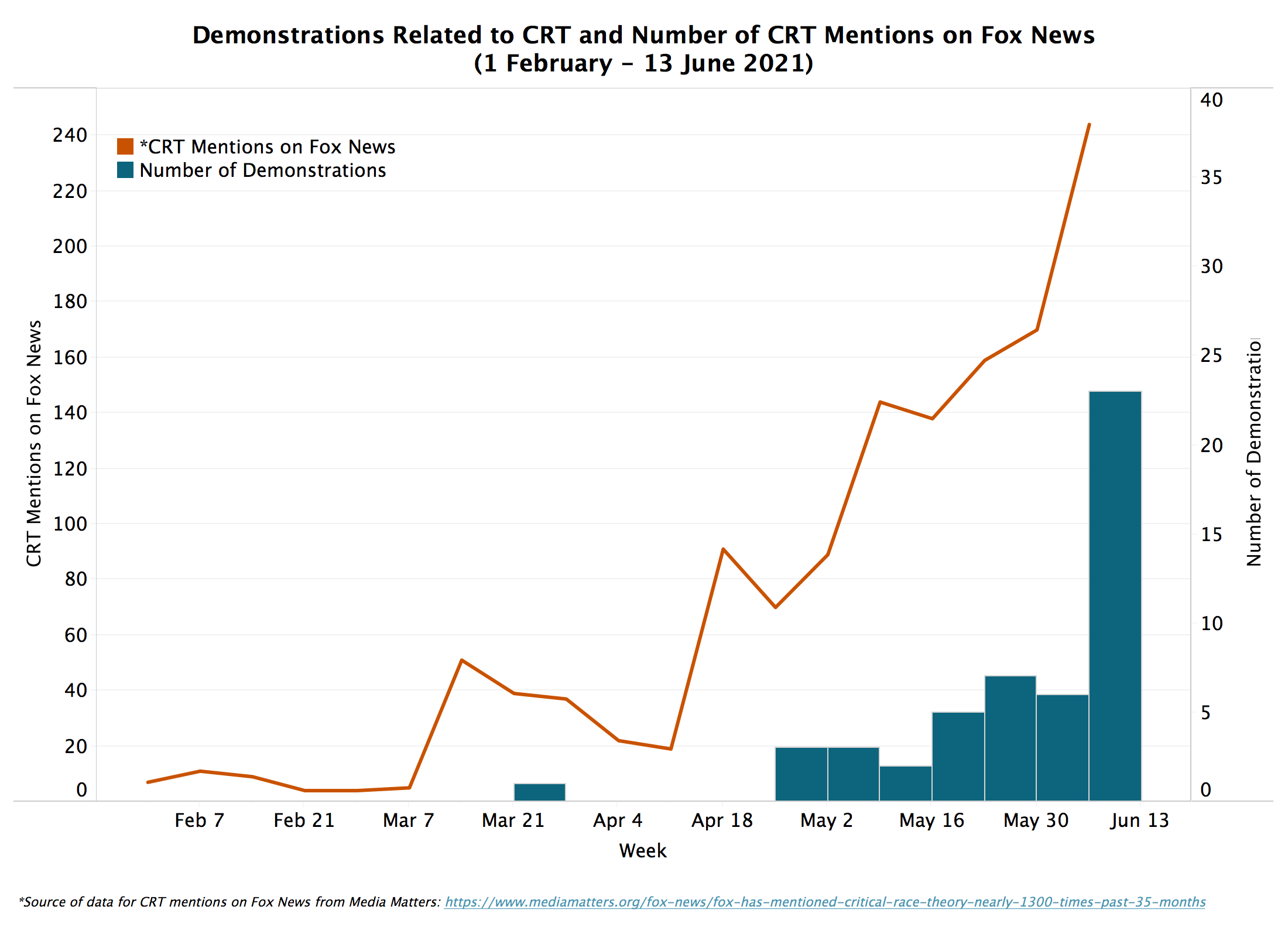 Approximately 20% of all CRT-related demonstration events have occurred in the six states that passed legislation to ban CRT in publicly funded schools. In these states, more than 70% of the protests have been in favor of CRT, while another 7% have included both supporters and opponents counter-demonstrating one another.

In at least three events, militias and other militant right-wing actors have directly reacted to the perceived threat of CRT — engaging in 6% of anti-CRT protests in the country — though all anti-CRT events involving these actors have remained peaceful. Militia and militant right-wing engagement includes III% adherents who participated in an anti-CRT event in Kentucky on 22 June, members of the Proud Boys who participated in an event in New Hampshire on 23 June, and armed members of the United American Defense Force who participated in an event in Colorado on 24 June. Through participation in such demonstrations, militias and militant social movements normalize their activity around populist and conservative issues.

Although CRT demonstration rates are unlikely to return to their June 2021 peak, a recent torrent of school board recalls over CRT-related issues may keep the topic on the political agenda, in turn driving further protest activity through the end of the summer. With the school year resuming in August and September and prefiled bills up for debate in adjourned state legislatures several months later, CRT demonstrations may see a resurgence this fall and winter.