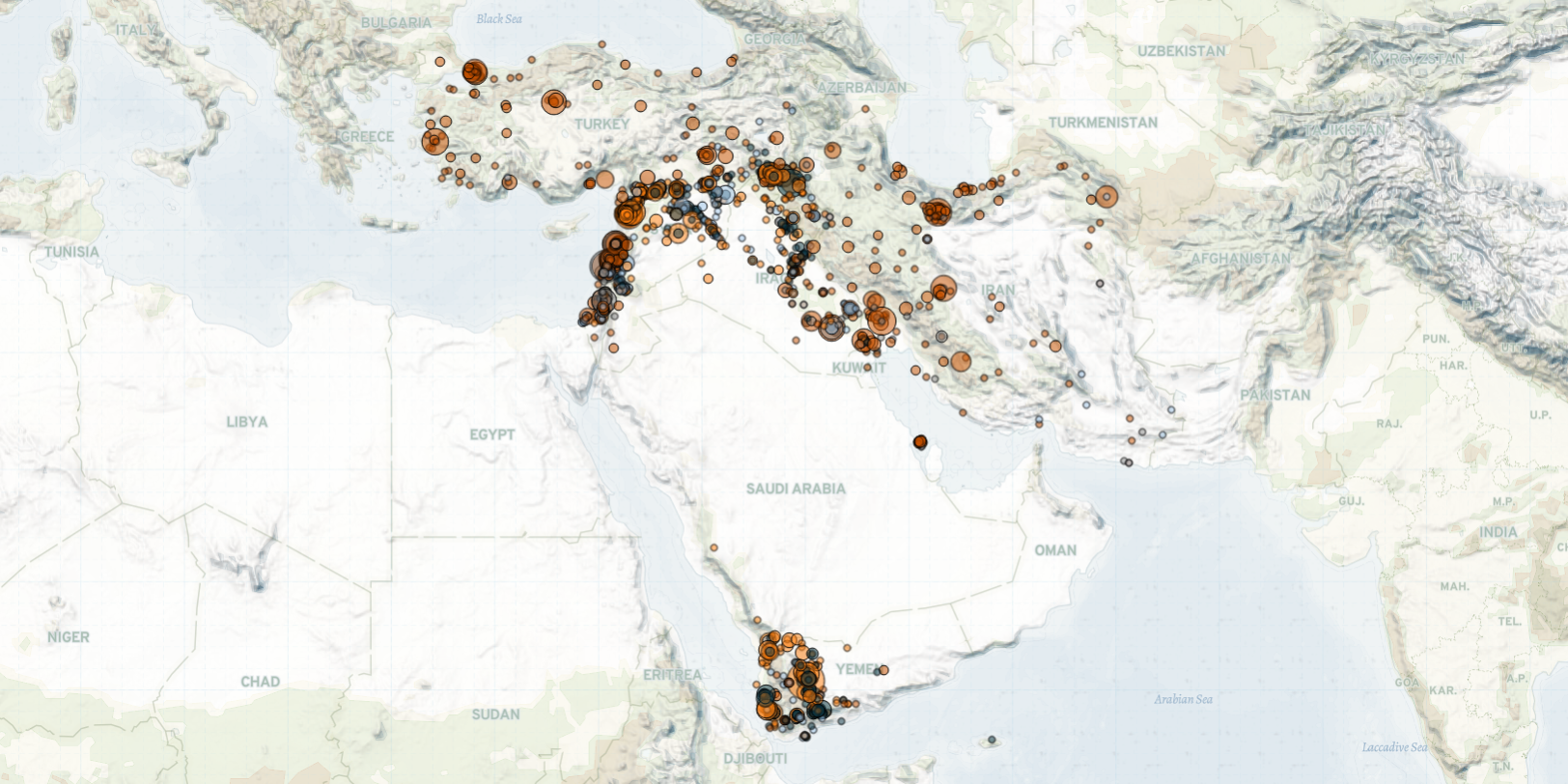 Last week in the Middle East, political violence in Marib governorate in Yemen flared up again as the pro-Hadi offensive in Al Bayda governorate seems to have been put to a halt by Houthi forces. In Saudi Arabia, no Houthi attacks were recorded for the second consecutive week in a rare occurrence. In Syria, regime forces shelled an INGO-supported hospital in Aleppo, killing a dozen civilians and rendering the hospital inoperable. Meanwhile in Iraq, another political activist was abducted and killed by unidentified militants in Baghdad. In Lebanon, the resignation of Saad Hariri sparked a new wave of protests over deteriorating economic and living conditions. In Turkey, protests over the appointment of a university rector with close ties to the ruling party continued despite his dismissal, and two attacks were observed against the pro-Kurdish Peoples’ Democratic Party (HDP) and its executives. Lastly, in Iran, demonstrations against water shortages and electricity outages in Khuzestan province turned violent, killing at least two.

In Yemen, hostilities decreased significantly in Al Bayda governorate last week, where pro-Hadi forces had launched an offensive on Houthi-held territory on 2 July. While sustained clashes continued throughout the first part of the week, ACLED records no events in the districts targeted by the offensive since 13 July. According to some sources, the setback of pro-Hadi forces could be the result of a deal between Houthi and Southern Transitional Council (STC) forces (Twitter @CarvajalF, 13 July 2021; Twitter @Alsakaniali, 15 July 2021). The deal would see STC forces prevent pro-Hadi reinforcements from reaching the frontlines in Az Zahir district of Al Bayda, while in exchange Houthi forces would agree not to attack STC-held territory in bordering Lahij governorate.

In contrast, political violence increased significantly in Marib governorate last week, driven by both Saudi-led coalition airstrikes and clashes between pro-Hadi and Houthi forces. For the first time since the Houthi offensive was launched on 8 February 2021, hostilities were concentrated in Rahabah district, southwest of the governorate, rather than in Sirwah district, west of Marib city. While both sides claim territorial gains in the district throughout the week, it is yet unclear whether this represents a new conflict strategy in Marib.

In Saudi Arabia, no Houthi attacks were reported last week for the second week in a row — the longest stretch of time without such reports of targeting since October 2020. It is unclear whether this is a strategic decision or the result of Houthi resources being spread thin in Yemen.

In Syria, regime forces shelled an INGO-supported hospital located in a residential area in Afrin city, Aleppo governorate on 15 July. The attack, which rendered the hospital out of service, killed at least a dozen civilians, including four hospital staff members, and wounded several others (France24, 15 July 2021). Meanwhile, armed clashes between opposition rebels and the Syrian Democratic Forces (QSD) continued along frontlines in the Menbij district of Aleppo and coincided with heavy shelling from both sides. In eastern Syria, a shell, suspected to have been fired by pro-Iran militia groups, landed in Global Coalition Forces-controlled Koniko gas field area in Deir-ez Zor on 11 July, though no casualties resulted from the attack (Middle East in 24, 11 July 2021).

In Iraq, unknown militants abducted and killed an activist who was part of the ‘October Revolution’ in Al Rashid area of Baghdad on 9 July. The targeting of political activists by unidentified militias has been a major issue since the Iraqi 2019 uprising. Widely believed to be perpetrated by pro-Iran militias, the killing of activists has often sparked protests by Iraqis calling for accountability and protection. Meanwhile, unidentified militants detonated two roadside IEDs targeting convoys carrying logistical materials for the Global Coalition in Anbar and Thi Qar governorates on 10 and 15 July, respectively. Additionally, the pro-Iran militia Ashab al Kahf carried out attacks on Coalition-affiliated convoys in Baghdad and Al Basrah governorates on 11 July, though no casualties were reported.

Last week in Lebanon, the resignation of Prime Minister-designate Saad Hariri on 15 July sparked a new wave of protests over worsening economic and living conditions (Al Jazeera, 16 July 2021). Hariri’s resignation follows his refusal to accept President Michel Aoun’s proposed changes to the proposed Cabinet lineup (CNN, 15 July 2021). Within minutes of the resignation, the local currency fell to a record low of more than 21,000 Lebanese pounds to the US dollar on the black market (Xinhua, 16 July 2021). Although the majority of demonstration events were peaceful last week, one event in Beirut saw clashes between demonstrators and the military, resulting in injuries on both sides. The lack of medicine across Lebanon led residents to storm a pharmacy in Beirut and to vandalize its contents. Meanwhile, at least two inter-clan armed clashes broke out at gas stations over refueling disputes amid the nationwide fuel crisis.

In Turkey, unidentified gunmen attacked the house of an HDP executive member in Avcilar on 12 July, as well as an HDP office in Marmaris two days later (TIHV, July 14, 2021). Reports indicate that both attacks only resulted in material damage. Several demonstration events were staged in response to the attacks. Meanwhile, students and lecturers continued to demonstrate at Bogazici University in Istanbul over President Recep Tayyip Erdogan’s appointment of a political ally as rector of the university in January 2021. The demonstrations continued despite his dismissal through a new presidential decree on 15 July (Reuters, 16 July 2021). Demonstrators vow to continue their escalations until their democratic demands are fulfilled and a president is elected and appointed.