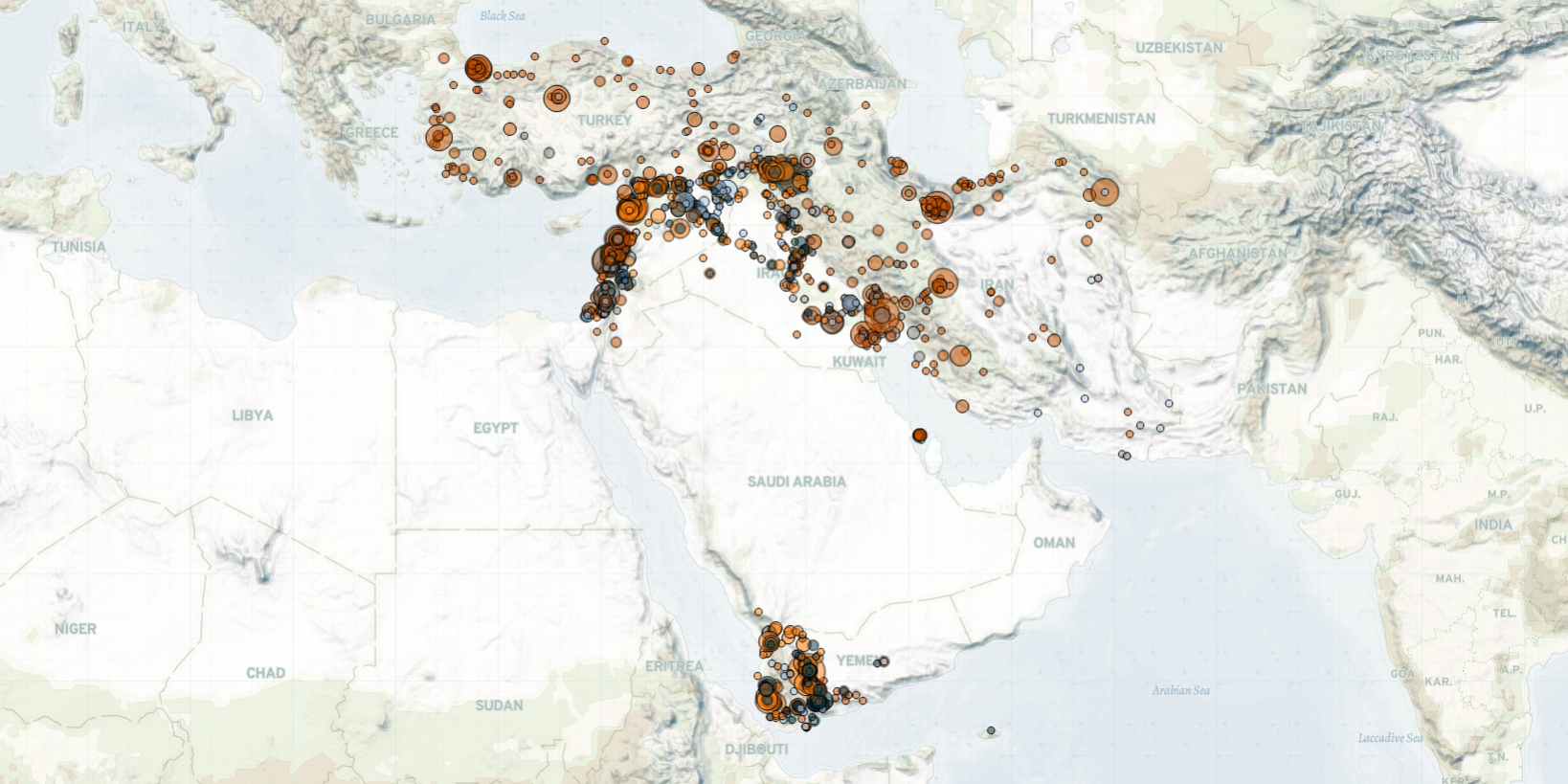 Last week in the Middle East, hostilities flared up again in Al Bayda governorate in Yemen, while clashes continue in the south of Marib governorate. Along the Saudi border, Houthi forces launched an offensive against Sudanese forces. In Syria, Israeli warplanes carried out airstrikes on regime force positions in Homs governorate, as regime forces continued to shell barrages on the Idleb enclave. In Iraq, a suicide attack by the Islamic State (IS) in Baghdad city killed dozens of civilians. Two rockets were fired by suspected Palestinian militants at Israel from Lebanon, whereupon Israeli forces launched retaliatory artillery shelling into Lebanon. In Turkey, Muslim groups protested incursions by Jewish settlers into the Al Aqsa compound, while two attacks against Kurdish people were reported. Lastly, violent demonstrations against water shortages and electricity outages continued in Iran, with clashes against police leaving at least five demonstrators and a police officer dead.

In Yemen, clashes between pro-Hadi and Houthi forces flared up again in Al Bayda governorate last week after a pause in hostilities following Houthi gains. Clashes were concentrated in the northern Naman and Nati districts, with Houthi forces reportedly taking over the entire Naman district. This puts them in a position to enter neighboring Bayhan district in Shabwah governorate, from where they were expelled in December 2017. Some pro-Houthi sources claim, however, that Houthi forces are not planning on entering Shabwah yet for tactical reasons (Twitter @tonytohcy, 25 July 2021).

In Marib governorate, clashes between pro-Hadi and Houthi forces continue to be concentrated in the southern Rahabah district, as pro-Hadi forces attempted to alleviate pressure on the fronts west of Marib city. For the second consecutive week, more events were recorded in Rahabah than in Sirwah district, where sporadic clashes are still taking place. In Rahabah, both sides continue to report territorial gains.

In Saudi Arabia, no Houthi drone or missile attacks were reported last week for the third week in a row — the longest stretch of time since July 2020. However, Houthi forces launched an offensive on Sudanese soldiers in the border area near Jizan governorate, the first time Sudanese forces have been targeted in this area since September 2019. In September 2020, Khartoum sent more than 1,000 soldiers to Saudi Arabia to revive its engagement in the Saudi-led coalition following a massive withdrawal of forces in January of that year (Middle East Eye, 2 October 2020).

In eastern Syria, a US drone, operating under the Global Coalition, targeted an Iraqi Kataib Hezbollah vehicle in the Sweiyeh area in Deir-ez-Zor on 18 July, having entered Syria from Iraq. At least one person, the driver of the vehicle, was killed in the strike. The vehicle was reportedly carrying a weapons shipment (Times of Israel, 18 July 2021).

While overall violence decreased last week in Iraq due to Eid Al Adha, IS carried out a suicide attack on Wahilat market in the Sadr area of Baghdad city on 19 July. The suicide attack left 35 civilians dead and 57 more wounded. This marks the deadliest attack in Iraq since the double-suicide bombing in January 2021 in Baghdad city (Al Jazeera, 19 July 2021).

Last week, two rockets were fired by unidentified, presumably Palestinian, militants from southern Lebanon into the Akko region in Israel. While one rocket was intercepted by the Iron Dome defense system, the second rocket landed in an open area of the Akko region, with no reports of material damage nor casualties. The attack comes hours after clashes between Palestinians and Israeli police forces were observed at the Temple Mount in Jerusalem, possibly triggering the attack by Palestinian militants. The Israeli Defense Minister Benny Gantz held Lebanon responsible for the rocket attack, accusing the Lebanese government of allowing “terrorists to operate within its territory” (Times of Israel, 20 July 2021). In response to the attacks, Israeli artillery forces shelled the Wadi Hammoul area in Lebanon, though with no reports of damage.

In Turkey, multiple protest events were observed by Muslim groups outside mosques last week in response to the storming of the Al Aqsa compound in Jerusalem by Jewish settlers (Beyaz Gazete, 19 July 2021). Meanwhile, members of the Kurdish community were the victims of two attacks last week. In Meram town, a group of 60 people attacked a Kurdish family, shooting one member of the family dead. In a second attack, an unidentified Turkish group attacked Kurdish agricultural workers in the village of Derecine in Afyon, allegedly because they were speaking Kurdish among themselves, injuring seven people. Elsewhere, Turkish gendarmerie soldiers and Kurdistan Workers’ Party (PKK) militants clashed in Malazgirt district, Mus province. Three PKK militants were killed as military and police forces launched an air-supported offensive in the region.

Lastly, in Palestine, a 17-year-old was killed, and nine others were wounded by live fire as Israeli military forces clashed with residents during raids in An Nabi Saleh village in Ramallah. Soldiers also fired tear gas and stun grenades in an effort to disperse the residents (DCI Palestine, 24 July 2021). On 18 July, Israeli police forces clashed with Muslim worshippers at the Al Aqsa mosque in Jerusalem after groups of Jewish pilgrims entered the compound. Rioters hurled rocks towards the police, who responded with sound grenades.