The third installment in our BLM State Spotlight series analyzes key trends in demonstrations associated with the Black Lives Matter movement — as well as the response from law enforcement and far-right actors — across Michigan. Check the US Research Hub for additional installments and the latest data. For more on nationwide protest patterns, read our special report, A Year of Racial Justice Protests: Key Trends in Demonstrations Supporting the BLM Movement. 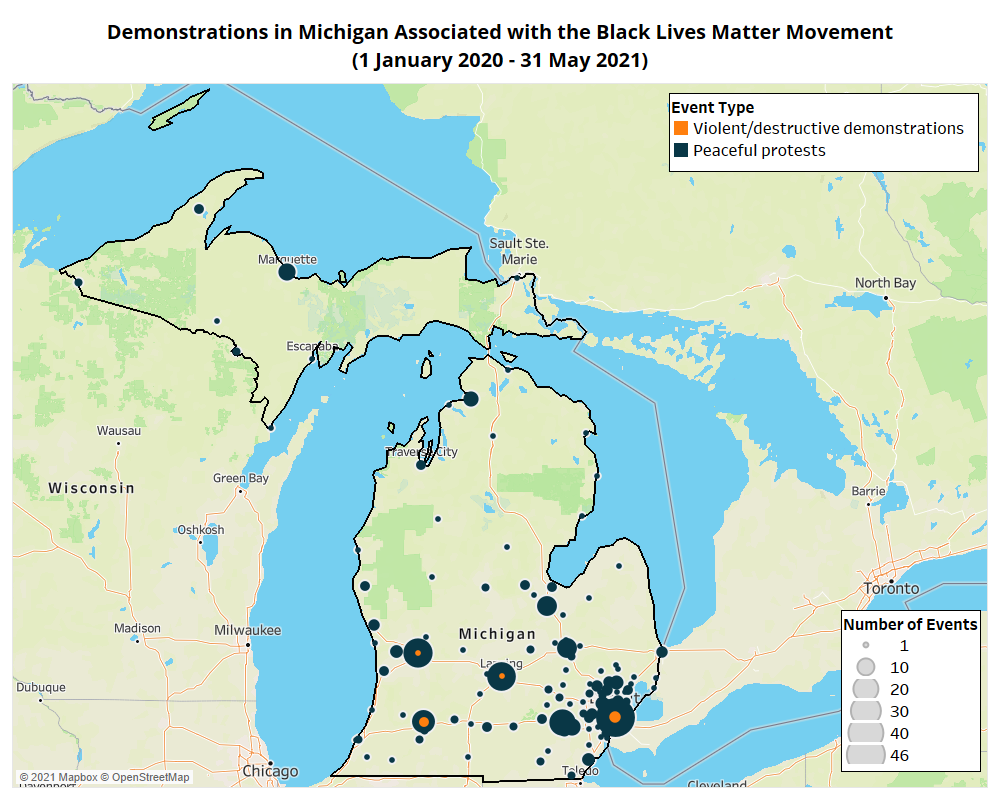 Overall, police have used force more than half of the time when intervening in demonstrations associated with the BLM movement in Michigan, which is higher than the national rate. Michigan police have repeatedly singled out pro-BLM demonstrators and used force even when other parties appear to have been responsible, or shared responsibility, for violent, disruptive, or destructive activity. For example, on 15 August 2020, Proud Boys marched through Kalamazoo to an anti-racism protest in support of the BLM movement. Proud Boys proceeded to attack the anti-racist and pro-BLM demonstrators with flag poles and pepper spray, leaving at least one man bloodied (MLive, 15 August 2020). Police arrived after the violence broke out and detained anti-racist demonstrators for not dispersing from a police zone and arrested a reporter from MLive for “impeding traffic,” but neither arrested nor detained any Proud Boys (Click on Detroit, 15 August 2020). Likewise, in Shelby Township, 20 miles north of Detroit, police arrested two pro-BLM protesters for “obstructing traffic” after they briefly stepped into the street gutter (Click on Detroit, 29 July 2020). Supporters of the police and former President Donald Trump counter-demonstrated against the pro-BLM group, yet none were arrested despite pro-BLM demonstrators accusing one pro-police demonstrator of assault (Detroit News, 30 July 2020; Click on Detroit, 29 July 2020).

Proud Boys and Boogaloo adherents have interacted with demonstrations associated with the BLM movement in Michigan on at least 10 separate occasions. As noted above, Proud Boys clashed with anti-racist and pro-BLM demonstrators in Kalamazoo in addition to Lansing, Traverse City, and Monroe. The Boogaloo movement, which differs from other armed right-wing movements in that some adherents purport to support BLM activism, were involved in six demonstrations related to BLM. They opposed the BLM movement in two-thirds of these interactions. Boogaloo engagement with BLM demonstrations in Michigan follows the national pattern of Boogaloo engagement — namely, a split between opposition to BLM and support for the movement. The Boogaloo Boys are adherents to a diverse set of neo-dadaist armed aesthetics and modalities aimed at setting off or preparing for a second American Civil War, which they regard as inevitable. Some Boogaloo Boys are explicitly right-wing and others have attempted to infiltrate and use BLM demonstrations as a way to accelerate the political situation towards mass violence, while others still appear to be genuinely antiracist (Center for Strategic and International Studies, 30 June 2021) — hence the split in both pro- and anti-BLM support in demonstrations (for more on the Boogaloo Boys, see this ACLED report). Boogaloo adherents who oppose the BLM movement were mostly active in Lansing, the state capital, in addition to a single event in Detroit. Conversely, one pro–BLM demonstration in Lake Orion included Boogaloo Boys purporting to support the BLM movement, carrying a sign saying “Boogaloo stands with you” and displaying the names of several Black people recently killed by police (Facebook – Lake Orion Review; 6 June 2020). At a 3 April 2021 pro-BLM demonstration in Lansing, armed Boogaloo adherents were asked by protest organizers to stay clear of the demonstration because of the group’s far-right ideology. The Boogaloo adherents stood across the street, expressing their support for the protest as it marched past but refraining from engaging further (YouTube @News2Share, 3 April 2021).

The American Patriots Council (APC), a militia-associated social movement in Michigan, developed out of opposition to COVID-19 lockdown measures, 2nd Amendment (‘2A’) activism, and counter-BLM organizing (Times Herald-Record, 23 October 2020). Despite being active in a midwestern state, the APC has organized demonstrations in defense of Confederate monuments after BLM supporters began to call for their removal (MLive, 20 October 2020). Several of the group’s events, including gatherings in support of Confederate monuments, were attended by members of the Michigan Wolverine Watchmen, the group now charged in association with a plot to kidnap Michigan Governor Gretchen Whitmer (MLive, 8 October 2020). The leader of the APC, Ryan Kelley — who attended the pro-Trump storming of the US Capitol in Washington, DC on 6 January 2021 — has recently announced a run for governor in Michigan. Kelley’s challenge to current Governor Whitmer, the politician targeted by milita members he organized alongside, suggests ‘2A’ and militia-involved activism in Michigan is unlikely to dissipate in the near term (RawStory, 27 March 2021; MLive, 27 March 2021).

Michigan is also the supposed location of a headquarters of the esoteric neo-Nazi movement known as The Base. The Base sought to establish a white ethnostate in the state’s Upper Peninsula before the group received federal charges related to violent action it was planning (VICE News, 23 February 2021; MLive, 18 May 2021). Also in the Upper Peninsula, the fascist group Patriot Front has spread propaganda explicitly targeting BLM and racial justice activism (Bridge Michigan, 18 March 2021). Much Patriot Front activity appears motivated by the adoption of equity measures and explicit condemnations of racism by local universities — actions taken by the schools in response to the wave of BLM demonstrations in the wake of George Floyd’s murder (Bridge Michigan, 9 February 2021).