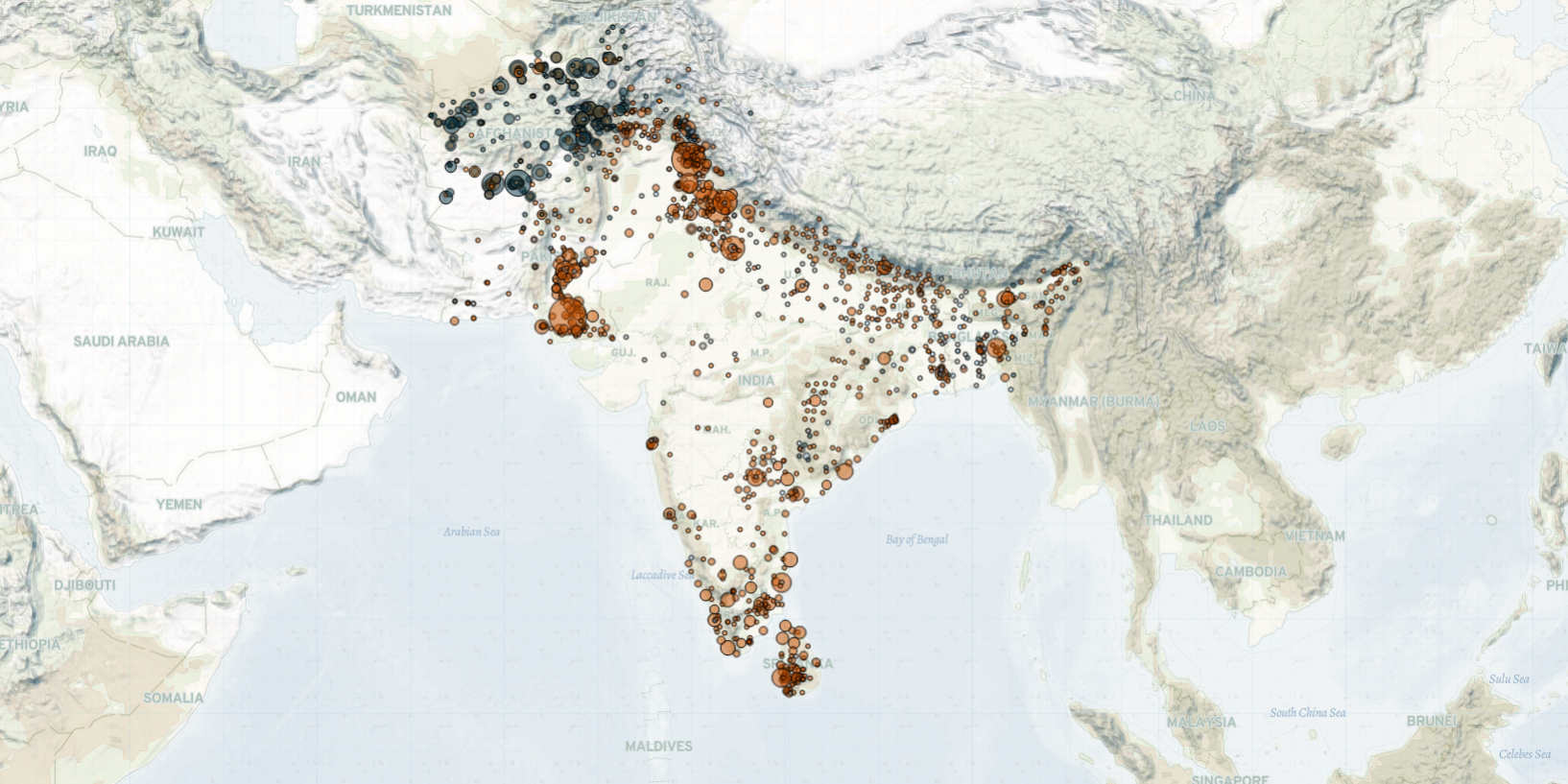 Last week in South Asia, the Taliban continued operations in Afghanistan, including attacks on provincial capitals, as Afghan state forces and the US responded with airstrikes. In Pakistan, Baloch separatists targeted Chinese laborers, increasing Chinese concerns about the safety of its citizens in Pakistan. In the Pakistan-administered Azad Jammu and Kashmir (AJK) region, members of political parties clashed during the Legislative Assembly elections. Lastly, in India, hundreds of Assam and Mizoram state police forces and locals clashed near a long-disputed state border.

In Afghanistan,1Until recently, ACLED was conducting a review of sourcing and reporting of the conflict in Afghanistan from 2020. That review is now complete and new supplemental data have been published. following a brief drop in violence due to the Eid Al Adha holiday, violence between Afghan state forces and the Taliban increased again last week, with clashes reported in 30 provinces. The Taliban continued attacks on Herat, Kandahar, and Lashkargah cities. The Taliban also captured the neighboring districts of Herat, Karrukh, and Guzera last week, facilitating their subsequent assault on Herat city (Long War Journal, 2 August 2021). Amid clashes between Afghan state forces and the Taliban in Herat city, the United Nations Assistance Mission in Afghanistan (UNAMA) compound was also attacked, leaving one police guard dead (Reuters, 30 July 2021). The UN accused “anti-government elements” of perpetrating the attack (United Nations, 30 July 2021). The government blames the Taliban, though the Taliban denies responsibility (VOA, 30 July 2021). Meanwhile, the US continues to target the Taliban with airstrikes as Afghan state forces also increased aerial operations compared to the week prior.

In Pakistan, the Baloch Liberation Front (BLF) fired at a car carrying two Chinese factory workers in Karachi city last week, injuring one of them. The attack comes two weeks after an explosion on a bus carrying Chinese and Pakistani personnel working at a Chinese-funded Dasu hydropower project in Khyber Pakhtunkhwa province. Nine Chinese and four Pakistani civilians were killed in the suspected militant attack. While both incidents are still under investigation, the Chinese government terminated the Dasu hydropower project and the Chinese foreign minister called on Pakistan to “better protect China’s interests in the country” (Gandhara, 30 July 2021). Baloch separatist groups have targeted Chinese workers and projects, accusing China of exploiting local labor and natural resources (Deutsche Welle, 14 July 2021). In April, the BLF set fire to the mobile tower of a Chinese company in Dasht town in Balochistan province.

Elsewhere in Pakistan, elections for the AJK Legislative Assembly took place last week, amid clashes between political opponents. Two Pakistan Tehreek-e-Insaf (PTI) members were killed in an exchange of fire with Pakistan Peoples Party (PPP) members at a polling station in Kotli district. In another incident, one person sustained bullet injuries during a clash between the PPP and the PTI. Violence between rival parties was also reported from several other polling stations in Muzaffarabad, Mirpur, Bagh, and Rawalakot districts, halting voting temporarily. The PTI — Pakistan’s ruling party — won 25 seats, thus obtaining a simple majority to form a government without support from any other party (The Express Tribune, 3 August 2021).

Finally, in Northeast India, rival state police forces clashed last week at a contentious border point between Assam and Mizoram states. At least five police officers and a civilian from Assam were killed, and more than 60 others were wounded in the cross-border clash. The clash reportedly began after Assam state police officers captured a newly constructed Mizoram police post (The New York Times, 27 July 2021). According to Assam police, the post fell within Assam state borders and was illegal (The New York Times, 27 July 2021). Mizoram state split from Assam in 1972 and shares a forested area with Assam, which has been the site of rare interstate clashes (BBC News, 31 July 2021). Tensions have been rising since June, when the states accused each other of encroaching on the other’s territories (Al Jazeera, 2 August 2021). A day after the clash, the Assam chief minister announced the deployment of 4,000 commandos to guard the border and advised residents against travelling to Mizoram (Al Jazeera, 27 July 2021).