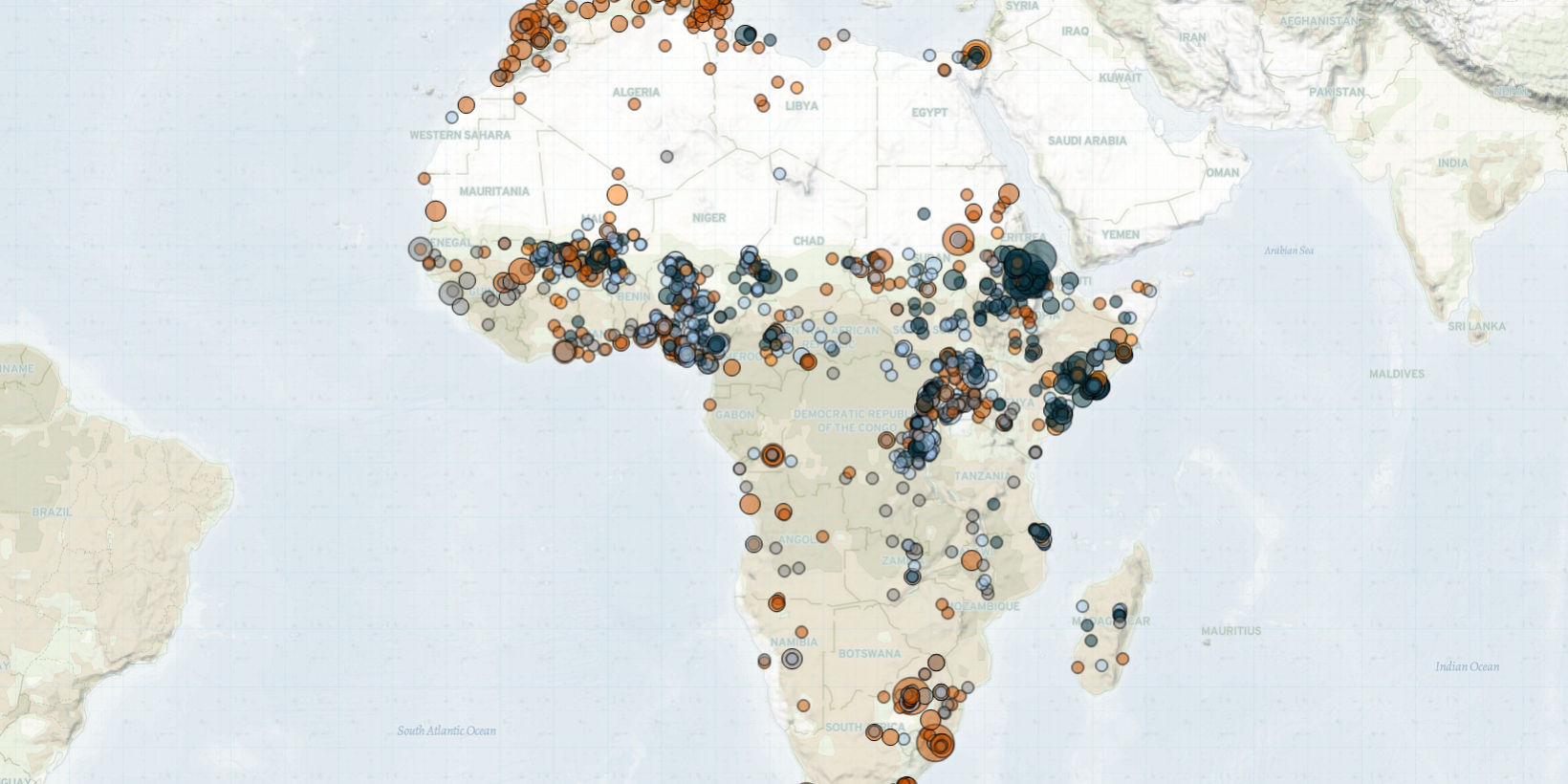 In August 2021, an Islamist militant attack left over a hundred people dead in Burkina Faso in one of the most lethal incidents in the central Sahel region so far this year; curfews and restrictions on movement and commerce were declared in Nigeria to tackle increasing violence in the country; intercommunal violence escalated in several countries, including Cameroon, Chad, Djibouti, and South Sudan; military forces of the Democratic Republic of the Congo and Somalia regained territory from the rebel groups; and an opposition leader was elected and sworn in as the president of Zambia.

Violent activity by Islamist militants remained high in the Central Sahel region. Jama’at Nusrat al-Islam wal-Muslimin (JNIM) militants and their affiliates were particularly active in Burkina Faso and Mali while Islamic State West Africa (ISWAP) was responsible for most events in Niger. In Burkina Faso, presumed JNIM-affiliated Ansaroul Islam militants launched an attack on a convoy escorted by gendarmes and volunteer fighters (VDP) on the road between Gorgadji and Arbinda in the Sahel region. The attack resulted in over 100 reported fatalities, including dozens of civilians. This is the deadliest attack in the Central Sahel region this year after another attack by suspected JNIM militants in June left around 160 people dead in the Solhan department of the Sahel region. Meanwhile, confrontations escalated between JNIM and ISWAP Greater Sahara factions militants in the Oudalan and Soum departments in Sahel with over 70 militants killed in the clashes.

In Mali, JNIM and its affiliates continued attacks against civilians and clashes with the military forces and local militia, particularly in the central regions of Mopti and Segou. Clashes between JNIM-affiliated Katiba Macina fighters and Donso and Dan Na Ambassagou militiamen inflicted heavy casualties among the militia with one group of Donso militia surrendering their weapons to Katiba Macina militants in the Cercle of Niono in Segou. Presumed JNIM fighters also carried out a complex ambush using a parked car bomb (VBIED) – a rare modus operandi – and small arms fire against a convoy of Malian security forces in the Douentza Cercle of Mopti, killing more than a dozen gendarmes and soldiers and capturing numerous vehicles, weapons, and ammunition. Elsewhere in the Gao region, there was an increase in the number of attacks perpetrated by the ISWAP Greater Sahara faction militants against civilians. Several attacks were reported in the Ansongo Cercle in the month of August which left dozens of civilians dead. In response, the French Operation Barkhane forces targeted ISWAP Greater Sahara faction positions, leaving dozens of militants dead.

In Niger, ISWAP Greater Sahara faction militants continued to commit mass atrocities in the Tillaberi region, particularly in the departments of Banibangou and Anzourou where many similar attacks had been carried out before. These attacks resulted in over 90 civilian fatalities. Elsewhere in the Diffa region, instances of abductions rose significantly in the N’Guigmi and Diffa departments. The abductions were perpetrated by presumed Boko Haram (JAS) Bakura faction fighters who also launched an attack against a Nigerien military position in the town of Baroua Gana in N’Guigmi. The attack was repelled but claimed many casualties on both sides. In retaliation, Nigerien forces reportedly arrested and summarily executed 17 fishermen in the Baroua Gana area over four days. This is the second deadliest attack perpetrated by Nigerien military forces targeting civilians this year.

In Nigeria, deadly clashes between ISWAP Lake Chad faction militants and Nigerian military forces continued in Borno state while a deadly confrontation between ISWAP Lake Chad faction and Boko Haram (JAS) Bakura faction fighters in the Abadam Local Government Area (LGA) left dozens of militants dead. Meanwhile, several states imposed restrictions to tackle escalating violence. A curfew was declared in three LGAs of Jos North, Jos South and Bassa in Plateau State after attacks by Fulani militia and reprisal by Irigwe militia led to the death of scores of civilians (The Guardian, 16 August 2021). In light of continuing attacks against civilians by local militia, restrictions on movement and commerce were also imposed in northern states of Sokoto, Zamfara, Katsina, Niger, and Kaduna (Bloomberg, 1 September 2021). These measures did not prevent the abduction of over 70 students in Maradun LGA of Zamfara state. This comes after over 100 students were kidnapped in July by local militia in Kaduna state. Meanwhile, Nigerian military forces carried out airstrikes targeting militias in Zamfara and Niger states.

ISWAP militants also launched several deadly attacks against military forces in the Far North region of Cameroon and the Lac region in Chad. Moreover, intercommunal violence escalated in both countries. In Cameroon, multi-day clashes between Musgum and Arab Choa ethnic militias in Logone-Birni town of the Far North region left dozens killed and injured and houses and properties damaged while in Chad, deadly confrontation flared up between Boulala farmers and Arab pastoralists near Bokoro in the Hadjer-Lamis region. Inter-ethnic clashes also erupted in Djibouti between members of the ethnic Somali from Issa clan and Afar community in Balbala and Arhiba neighborhoods of Djibouti where several people were killed and businesses, houses, and other buildings were also reportedly destroyed. The clashes were reported as spillovers from tensions within neighboring Ethiopia, where clashes between ethnic Somalis and Afars are ongoing.

In the Central African Republic, several attacks were reported by the Russian mercenaries of the Wagner group against civilians which is in line with the pattern of violence over the previous months. In Ouham-Pende and the neighboring Nana-Mambere prefecture, Fulani pastoralists were targeted and dozens of them were killed for their alleged support of rebel groups. Meanwhile, battles continued between military forces combined with the Wagner group against the Coalition of Patriots for Change (CPC) affiliated armed groups in the northwest of the country.

In the Democratic Republic of Congo, the Congolese armed forces (FARDC) reportedly regained control of several villages in Ituri, South Kivu and North Kivu provinces, most of them previously occupied by the Cooperative for Development of Congo (CODECO), Ngumino militia, and Allied Democratic Forces (ADF). Meanwhile, deadly attacks by rebel groups continued in these provinces leading to the extension of the ‘State of Siege’ operation for another 15 days once again.

In Somalia, military forces took over several villages in Mudug and Lower Juba regions after fighting against Al Shabaab militants. During clashes to regain control of Camaara village, the Somali military forces claimed to have killed at least 70 militants. Later in the month, Al Shabaab forces launched an attack on military forces in Camaara using VBIED and heavy gunfire and claimed killing at least 60 soldiers, and confiscating vehicles. They took over the village after Somali forces withdrew from Camaara as well as Baad Weyne village in Mudug region. Several remote attacks were also reported by Al Shabaab militants against Somali military forces and African Union Mission in Somalia (AMISOM) troops. Also in Mudug region, dozens of soldiers were believed killed in an IED attack targeting a military forces convoy near Caad village, and  a Somali commander survived an assassination attempt when his convoy was targeted between Shabeelow and Baad Weyne villages.

The security situation continued to deteriorate in South Sudan. Heavy fighting was reported in the Upper Nile state, between Sudan People’s Liberation Movement – In Opposition (SPLM-IO) forces loyal to Dr Riek Machar and IO forces loyal to senior generals who signed the Kitgweng Declaration. Thousands were reportedly displaced due to the fighting. In the southeast of the country, clashes among Toposa and Turkana militias were reported along the South Sudan-Kenya border, and in particular around the Nadapal area of Kapoeta East County in Eastern Equatoria state. Meanwhile, heavy fighting between Rek Dinka militias and the Luach-Jang Dinka clan continued in Warrap state, leaving dozens dead across two days of clashes. Lastly, on the outskirts of Juba, fighting resumed between Mundari clans, displacing hundreds.