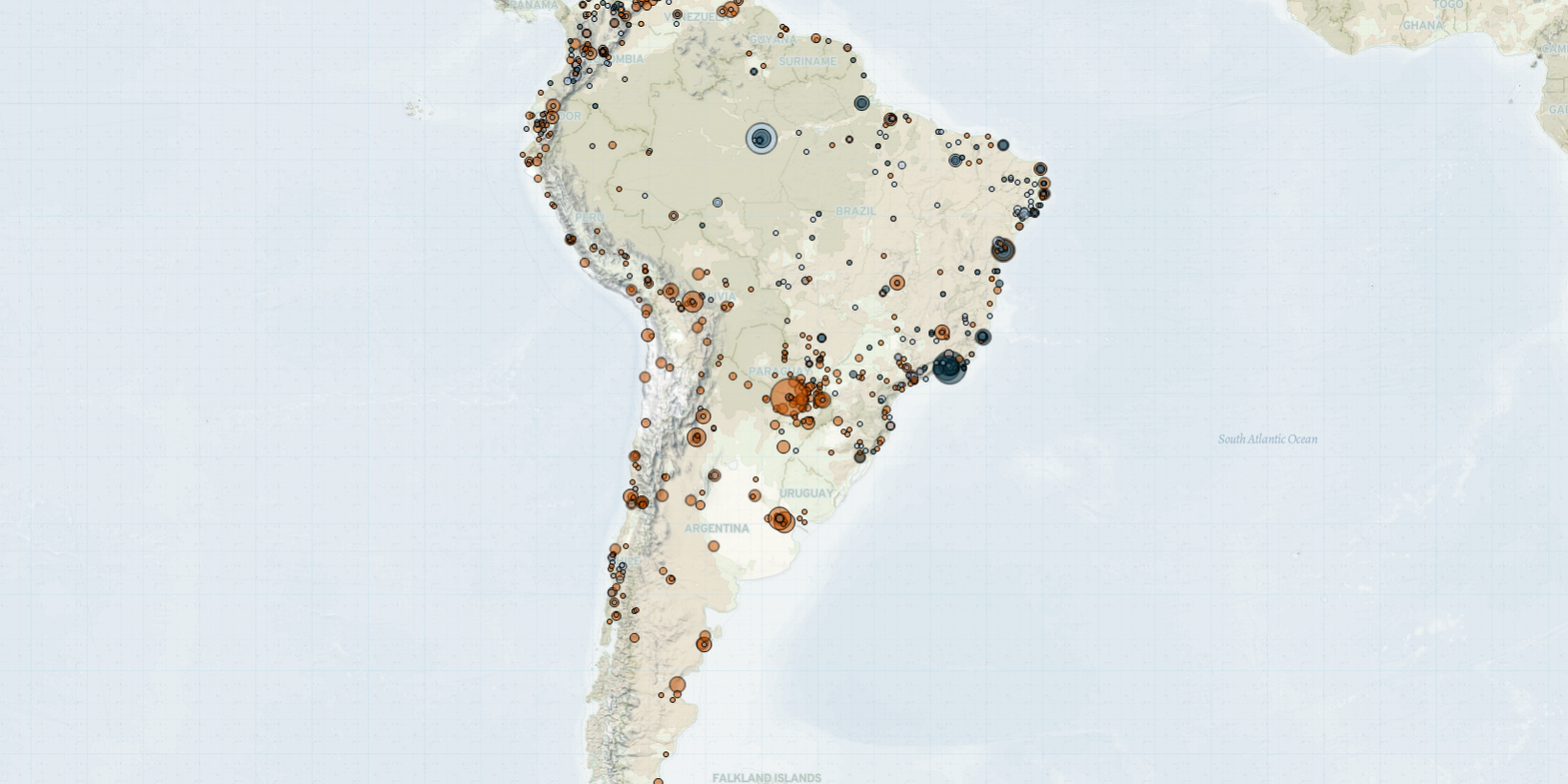 Last month in South America, tensions increased along the Colombian-Venezuelan border as rival armed groups broke a years-long truce; fighting between state forces and armed groups continued elsewhere in Colombia. Meanwhile, anti-government demonstrations were reported across several countries in South America. In Bolivia, supporters of former Interim President Jeanine Áñez called for her release from prison. Indigenous groups took to the streets in Brazil against a law that would prevent them from reclaiming indigenous lands. Meanwhile, truck drivers blocked highways across Paraguay against the government’s non-compliance with an agreement to increase driver freight rates. Finally, in Peru, President Pedro Castillo faced protests against his Cabinet nominations in his first month as president.

Last month, violence increased in the border region of Colombia and Venezuela. On 3 August, members of the Tren de Aragua killed the leader of the 10th Front of Dissidents from the Revolutionary Armed Forces of Colombia (FARC) as he attempted to cross from Venezuela to Colombia by boat via the Arauca River. In retaliation, members of the 10th Front of Dissidents from the FARC imposed a curfew on the Colombian side and began targeting members of the Tren de Aragua, breaking a years-long truce in the region (Infobae, 19 August 2021). Weeks of clashes between the two groups ultimately left at least 16 people dead, including one of the leaders of the Tren de Aragua, who was abducted and later found dead on 17 August (RCN, 25 August 2021). Reports indicate that he may have been betrayed by members of the Tren de Aragua in exchange for a renewed ceasefire with the FARC dissidents (La Voz de Cinaruco, 11 August 2021). The Tren de Aragua is one of the most powerful crime groups of Venezuela, where it engages in drug trafficking activities, extortion, and kidnappings (Insight Crime, 18 Jul 2020). The group gained control over illegal trade in the border by establishing alliances and agreements with other groups, including FARC dissidents (La Patilla, 18 August 2021; El Politico, 11 February 2021). The current upsurge in violence along the Apure-Arauca border is only the latest in a year that has provoked considerable concern within the Venezuelan government over the presence and strength of armed groups in the region (Wall Street Journal, 10 June, 2021). While the government of Nicolás Maduro once supported rebel groups on the border, it now struggles to control them as they have established themselves as important actors in the region (Wall Street Journal, 10 June, 2021).

Meanwhile, armed clashes between state forces and other armed groups continued in Colombia last month, particularly in the departments of Cauca, Chocó, Nariño, and Norte de Santander. In the city of Cúcuta, Norte de Santander, members of the National Liberation Army (ELN) set off a bomb near a police station, wounding 14 people, including two civilians (El Tiempo, 30 August 2021). This is the second bombing attack in the city this year — on 15 June, suspected members of a dissident faction of the FARC set off a car bomb at a military barracks in the city (DW, 22 July 2021).

Elsewhere in South America, anti-government demonstrations were reported across several countries last month, including in Bolivia, Brazil, Paraguay, and Peru. In Bolivia, supporters of former Interim President Jeanine Áñez took to the streets for several days to call for her release from prison. Áñez and other former government officials have been under arrest since March of this year on charges of “terrorism and sedition”, and for taking part in the alleged coup against former President Evo Morales in 2019 (CNN, 23 August 2021). Human rights activists joined the protests following reports of a deterioration of Áñez’s health, and her attempted suicide (El Deber, 21 August 2021). Demonstrators claim that her arrest was illegal and an act of political persecution by the current leftist government of Luis Arce (El Deber, 16 August 2021).

In Brazil, thousands of indigenous peoples held a week-long protest, starting on 24 August, as the Supreme Court set to begin ruling on draft bill 490/2007 (Mongabay, 27 August 2021). If approved, the bill would prevent indigenous populations from reclaiming ancestral lands if they had not settled in those lands nor began legal action to claim those lands by 5 October 1988 — the day the Constitution came into force (Câmara dos Deputados, 20 March 2007). The bill had been lingering in Congress since it was drafted in 2007, but gained new strength after President Jair Bolsonaro took office in 2018 (HRW, 24 August 2021). President Bolsonaro has stated his intention to open up protected lands to agriculture, mining, and other commercial activities. Furthermore, during his presidential campaign, Bolsonaro vowed to not demarcate “one centimeter” of indigenous lands (HRW, 24 August 2021). Indigenous rights defenders argue that the cut-off date of 1988 is arbitrary, considering many indigenous populations had been removed from their territories since South America was colonized by Europe in the 1500s and thereafter (Mongabay, 27 August 2021). An estimated 6,000 indigenous leaders from 176 groups protested outside the Supreme Court in the capital, Brasília, for seven consecutive days to urge the Supreme Court to uphold indigenous rights and rule against the bill (Mongabay, 27 August 2021). The voting of the bill was postponed three times by the Supreme Court, but voting resumed on 8 September, as indigenous groups set up a camp outside the Court (G1, 8 September 2021).

In Paraguay, anti-government demonstrations took place throughout the month, with truck drivers blocking several highways across the country and disrupting the transportation of goods. The group started a nationwide strike after the government failed to comply with an agreement reached in May, which established an increase in the drivers’ freight rates following a raise in gas prices (La Nación, 19 August 2021). On 10 August, other groups, including teachers, farmers, health workers, and indigenous groups, joined their nationwide strike and staged protests to press for unfulfilled promises made by conservative President Mario Abdo Benítez. Truck drivers eventually reached an agreement with the government, after more than 20 days of protests, and the highway blockades were suspended (ABC, 18 August 2021).

Finally, in Peru, newly-appointed leftist President Pedro Castillo faced protests against his first cabinet appointments. Opponents of his government took to the streets in Lima and other cities against the nomination of Prime Minister Guido Bellido. The new prime minister is being investigated on charges of “incitement to terrorism” after defending the actions of former guerrilla group Shining Path during an interview (El Comercio, 29 July 2021). In spite of public pressure, the cabinet nominations were later approved and confirmed by the opposition-led Congress (Reuters, 30 August 2021). Castillo is the fifth president of Peru in five years, with conflicts between the presidency and the legislature having led to ouster or resignations of several sitting presidents (for more, see ACLED’s piece Political Instability and Demonstration Trends in Peru).