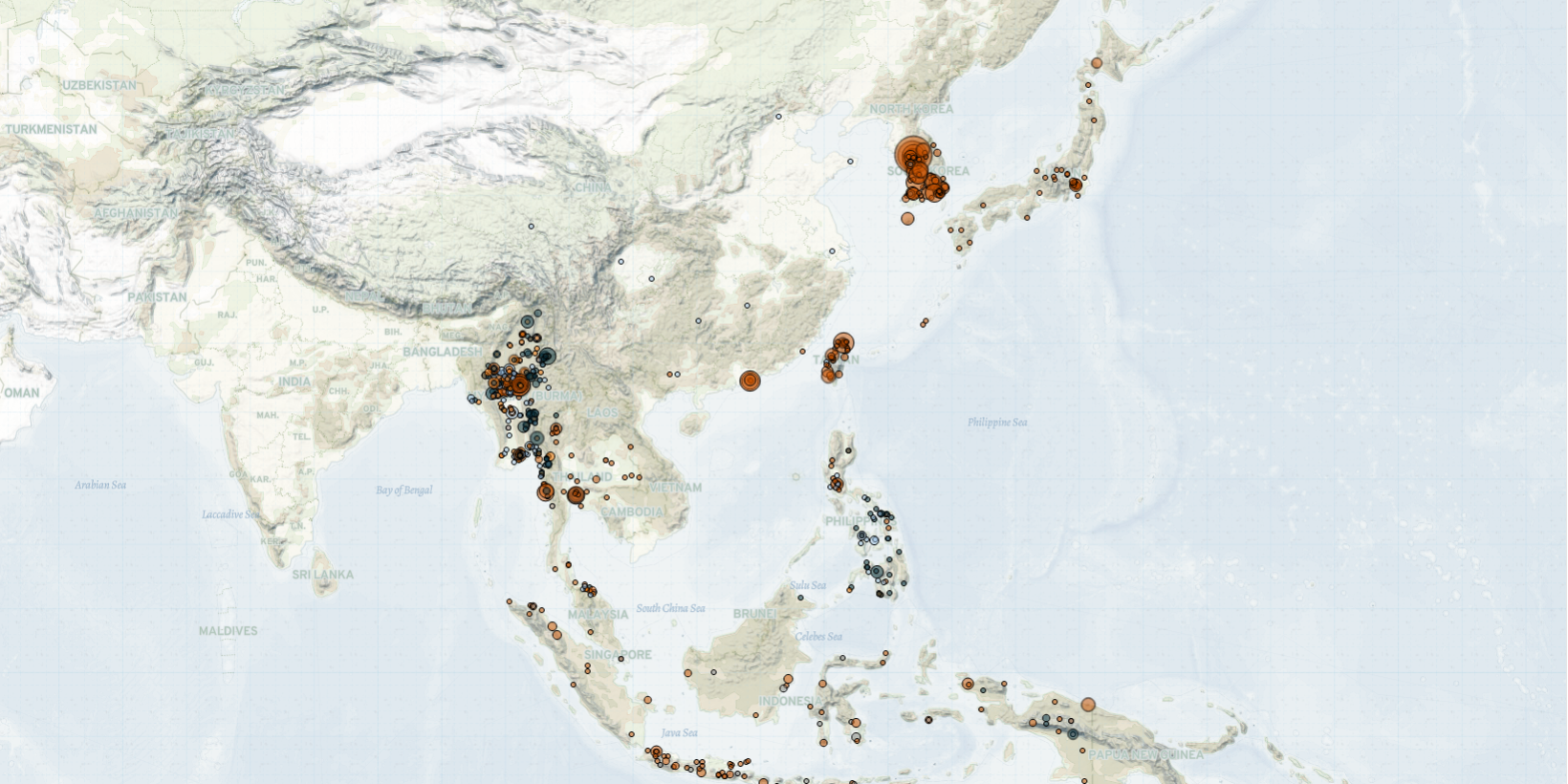 Last month in East and Southeast Asia, the military regime in Myanmar announced the formation of a new caretaker government led by the regime chair in his new self-appointed position as prime minister. Meanwhile, anti-coup demonstrations continued as protesters rallied on 8 August to mark the anniversary of the 1988 pro-democracy uprising. Deadly clashes between the military and ethnic armed organizations (EAOs) continued in parts of the country. In Thailand, violent demonstrations and clashes spiked with a rise in anti-government rallies in Bangkok. In the Philippines, clashes between military forces and militants continued during August. A new prime minister was appointed in Malaysia after the former prime minister lost support in the parliament. In Indonesia, there was an increase in clashes between the military and the West Papua National Liberation Army (TPNPB), while police forcibly intervened in a series of demonstrations demanding the release of a Papuan political prisoner.

In Myanmar, on 1 August, exactly six months after the military seized power and deposed the civilian government, the regime announced the formation of a caretaker government, with the junta chair installed as prime minister. In a televised statement, the junta chair also announced an extension of the state of emergency from one year to two and a half years, promising to hold elections by August 2023 (Myanmar Now, 1 August 2021). The National Unity Government — which includes ousted civilian leaders — have denounced the move, stating that the action is a precursor to broader plans to delay the transfer of power to a civilian government (RFA, 1 August 2021).

Meanwhile, anti-coup protests continued across Myanmar throughout August, especially in the resistance strongholds of Mandalay, Sagaing, and Tanintharyi regions. Notably, on 8 August, protesters marked the anniversary of the 1988 pro-democracy uprising — also referred to as the 8-8-88 uprising — against the previous military junta (Reuters, 9 August 2021). Placards and banners at several protests made reference to the 1988 uprising and called for support to complete the “unfinished 8-8-88 people’s liberation movement” (Myanmar Now, 8 August 2021).

Separately, clashes between the Myanmar military and EAOs were reported in eastern Bago region, and Kachin, Kayah, Kayin, and Shan states last month. In Kayah state, fierce fighting continued between the military and joint forces of the Karenni National Progressive Party/Karenni Army (KNPP/KA) and the Karenni Nationalities Defense Force (KNDF) in August. On Karenni Army Day on 17 August, both the KNPP/KA and KNDF reaffirmed their commitment to work together, stating that both groups share the goal of overthrowing the military regime and establishing a federal union in Myanmar (Burma News International, 20 August 2021).

In Thailand, in the first half of August, anti-government protests gained momentum in the form of nationwide car rallies, in respect of social distancing measures put in place during the coronavirus pandemic (Nikkei Asia, 2 August 2021). However, violence between protesters and police is expected to increase with protesters announcing their intention to switch from car rallies back to daily demonstrations, with intelligence sources stating that government properties may even be torched in future demonstrations (Bangkok Post, 25 August 2021). The number of violent incidents and clashes also spiked with the rise in anti-government protests in Bangkok. A newly formed group called Thalugaz emerged in August and has adopted non-peaceful demonstration methods, such as throwing marbles, hard objects, and improvised explosives against the crowd control police (Matichon, 21 August 2021), while other student-led groups maintained their non-violent stance (Bangkok Post, 18 August 2021). The core demands of the protests remain the same, including calling for the resignation of Prime Minister Prayut Chan-o-cha, institutional and monarchy reformation, and better handling of the pandemic (The Diplomat, 6 September 2021). However, as more than 250 protesters and protest leaders have been arrested since July and are facing prosecution on protest-related charges (Bangkok Post, 25 August 2021), the leaderless movement has become more fragmented.

In the Philippines, on 16 August, the military carried out its biggest and deadliest one-day operation against the New People’s Army (NPA) in recent years. At least 19 NPA militants were killed during a combined air and ground operation in Dolores, Eastern Samar (Philippine News Agency, 19 August 2021). The military attributed the operation’s success to the government’s ‘whole-of-nation’ approach in addressing the communist insurgency, with the cultivation of informants, and the use of drone surveillance (Manila Bulletin, 17 August 2021).

Meanwhile, an armed barangay watchman killed a civilian allegedly violating the coronavirus curfew on 7 August, prompting a Commission on Human Rights investigation (Rappler, 9 August 2021). Human rights group Karapatan stresses that the killing fits a pattern of continued state violence against civilians (Rappler, 11 August 2021). In response to the killing, the government reiterated that barangay watchmen and other “police auxiliary units” are not allowed to carry firearms (Philippine News Agency, 12 August 2021). However, in June 2018, President Rodrigo Duterte publicly supported arming barangay watchmen to strengthen the fight against illegal drugs (Business Insider, 13 June 2021). Moreover, more recently in April 2020, Duterte publicly gave orders to military, police, and barangay officials to shoot anybody who is “causing troubles” during the coronavirus lockdown (Rappler, 1 April 2020). Since then, at least three curfew violators have allegedly lost their lives in the context of the enforcement of COVID-19 regulations (Rappler, 11 August 2021).

Separately, week-long armed clashes between the military and the Maute Group, a local entity affiliated with the Islamic State (IS) in Lanao del Norte and Lanao del Sur, led to the evacuation of around 400 families (Mindanao Gold Star Daily, 25 August 2021). According to ACLED data, this is the longest continuous clash between the military and the Maute group reported this year. In 2017, Maute Group famously seized Marawi city, the capital of Lanao del Sur province, in a five-month-long battle displacing most of the city’s residents, which brought the world’s attention to the influence of IS in Southeast Asia (Reuters, 2021).

In Malaysia, police forces shot dead two men suspected to be members of the militant group Abu Sayyaf during an armed clash at Timbang Island, Sandakan (Free Malaysia Today, 20 August 2021). This marks a spillover of violence related to Abu Sayyaf, one of the strongest Islamist separatist groups in the Philippines, whose members have fled to Malaysia to avoid Philippine authorities in Sulu (BenarNews, 10 May 2021). The group is reportedly responsible for a twin suicide bombing at a Catholic cathedral in Jolo in the Philippines (BenarNews, 10 May 2021). This is the second time this year that Malaysian forces have clashed with Abu Sayyaf militants during a raid in an effort to crack down on the group blamed for a series of kidnappings in the state of Sabah (The Star, 20 August 2021)

Also in Malaysia, the United Malays National Organisation (UMNO) returned to power with the appointment of Ismail Sabri Yaakob as prime minister on 21 August. His appointment follows the resignation of the previous prime minister, Tan Sri Muhyiddin Yassin, due to public pressure and a loss of majority support in parliament (Malay Mail, 20 August 2021). The Muhyiddin administration was heavily criticized for the handling of the pandemic, including the implementation of a year-long lockdown and the shutdown of parliament (DW, 31 July 2021). UMNO governed the country for more than six decades post independence, but lost the 2018 election following a corruption scandal. The new cabinet retains 60 out of 69 ministers and deputies from the previous administration.

In Indonesia, the TPNPB killed two construction workers and burned their car during an attack in Dekai town, Papua province, amid an increase in armed clashes with Indonesian state forces in August. The rebels accuse the victims of being spies for Indonesian authorities. The following day, the rebels engaged in an armed clash with Indonesian forces, who were evacuating the rest of the workers (Suara Papua, 24 August 2021). It is not the first time that rebels have targeted non-Papuan workers. In December 2018, the TPNPB kidnapped 25 construction workers and killed 19 of them in Nduga (Tribunnews, 9 December 2018). On 2 September, the rebels also attacked a military post in Kisor village, West Papua province, killing four soldiers (Kompas, 2 September 2021). Security forces arrested one TPNPB leader and five other rebels following the attack. The officers shot one arrestee, a former Indonesian military soldier, for allegedly resisting arrest (Detik, 2 September 2021).

Also in Indonesia, police reportedly shot dead a Papuan demonstrator during demonstrations demanding the release of a Papuan political prisoner, Victor Yeimo, as reports emerged of his poor health (Suara Papua, 22 August 2021). Yeimo, the former spokesperson of the West Papua National Committee (KNPB), a pro-independence movement and organization, was arrested in May 2021 and charged with multiple criminal charges, including treason, conspiracy, and incitement, in connection to a series of riots in Papua in 2019 (Al Jazeera, 10 May 2021). Police dispersed multiple Papuan demonstrations and arrested demonstrators.

Elsewhere, Indonesian authorities arrested over 50 Islamist militants who were allegedly planning an attack on Indonesian Independence Day (Reuters, 20 August 2021). Some of the militants were affiliated with Jemaah Islamiah (JI), a jihadist network with ties to Al Qaeda, and the IS-inspired Jamaah Ansharut Daulah (JAD). Police also arrested the head of the fundraising group, Syam Organizer, who allegedly collects donations to finance JI (Tribunnews, 16 August 2021). The action is part of an ongoing country-wide crackdown on a new militant cell of JI which was behind the 2008 attack in Bali that killed 202 people (AP, 19 August 2021).

Meanwhile, demonstrations related to the coronavirus pandemic continued to be reported across East and Southeast Asia in August. Mass demonstrations by health workers were reported across the Philippines last week, with workday protests and walkouts seen in major hospitals. The demonstrations came amid ongoing delays to the disbursement of coronavirus-related benefits to health workers (Al Jazeera, 1 September 2021). In Japan, demonstrations against the Olympics and Paralympics continued to be held amid a new wave of COVID-19 infections that began with the start of the Olympics in late July (Al Jazeera, 10 August 2021). The government has denied any links between the games and the surge in infections (Al Jazeera, 10 August 2021). In Taiwan, a series of demonstrations against the rollout of the new locally-produced COVID-19 vaccine, Medigen, were also held in August. The vaccine has drawn criticism for its hasty emergency approval and rollout by regulators (Al Jazeera, 23 August 2021).