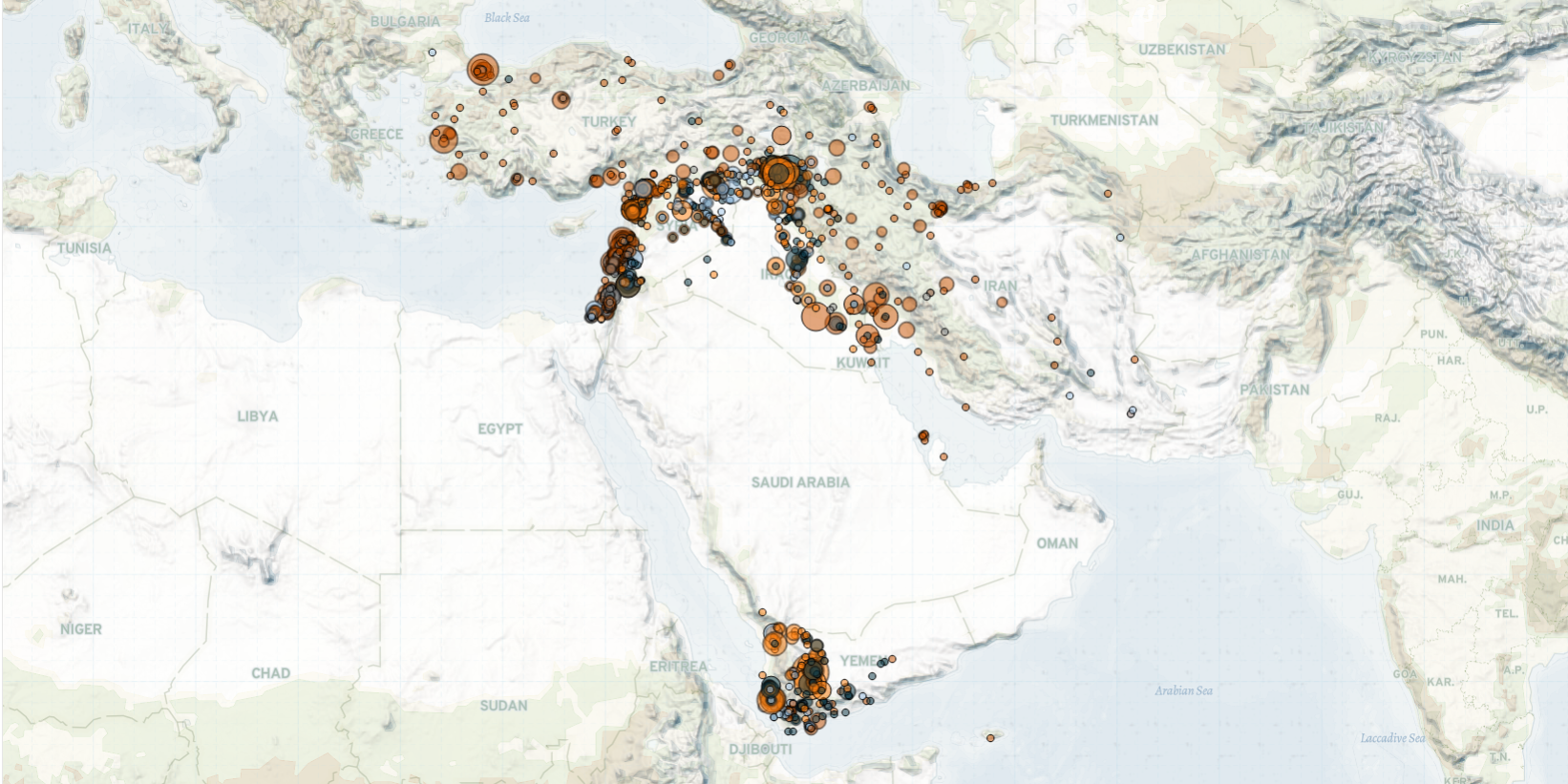 During the last five weeks in the Middle East, political violence decreased significantly in Al Bayda governorate in Yemen, while clashes between Houthi and pro-Hadi forces picked up last week in Marib governorate. In Lahij, the second deadliest attack this year, outside the frontlines of Marib, was recorded on 29 August. In Saudi Arabia, Houthi drone and missile attacks saw a significant increase last week. In Syria, Russian warplanes carried out airstrikes on the Turkey-backed Al Sham Corps in the Afrin district of Aleppo — the first aerial attack by Russian forces on the district since its takeover by Turkey in 2018. In southern Syria, a Russian-brokered agreement was reached to end the regime’s military campaign in Dar’a Al Balad and the months-long blockade. In Iraq, demonstration activity across the country nearly doubled, while Turkey escalated military operations against the Kurdistan Workers’ Party (PKK) in northern Iraq. In Palestine, violent demonstrations erupted in the Gaza Strip over the ongoing Israeli blockade of the territory, while clashes between Palestinians and Israeli security forces during anti-settlement demonstrations in the West Bank continued. Meanwhile, Lebanon-based militants and Israeli forces exchanged cross-border rocket fire as tensions flared between Hezbollah and Israel. Lastly, demonstrations over the deteriorating economic conditions and fuel shortages in Lebanon spiked in mid-August, before subsiding in the past two weeks.

In Yemen, overall levels of political violence last month remained relatively consistent with those recorded in July. Al Bayda governorate, however, saw a drastic decline in political violence throughout the month, continuing a trend that began in late July. Pro-Hadi forces had launched an offensive against Houthi-held territory in the governorate in early July, but failed to achieve the territorial gains they had hoped for.

The declining violence in Al Bayda governorate was partly counterbalanced by an increase in political violence in Taizz governorate, primarily the result of clashes between pro-Hadi and Houthi forces on the outskirts of Taizz city. In late August, Houthi forces notably launched coordinated attacks on the city from different directions, although these were all repelled by pro-Hadi forces affiliated with the Taizz Axis.

In Marib governorate, political violence was mostly driven by Saudi-led coalition airstrikes throughout most of last month, as armed clashes between Houthi and pro-Hadi forces remained at relatively low levels. In the last week of August, however, hostilities between Houthi and pro-Hadi forces flared up significantly with armed clashes reaching levels unseen in the governorate since April 2021. Houthi forces claimed a number of territorial gains west of Marib city, as well as south of the governorate in Rahabah district.

In southern Yemen, the second deadliest attack this year, outside the frontlines of Marib, was recorded in Lahij governorate last month. On 29 August, Houthi drones and ballistic missiles struck Al Anad air base, killing 40 soldiers from the Giants Brigades and injuring 92 others (The National, 1 September 2021). The continued fragile security situation in southern Yemen is also illustrated via an attack by unidentified gunmen on the convoy of Hadi Minister of the Interior Ibrahim Haydan in the Hadramawt valley last month. In another noteworthy development in southern Yemen, British special forces deployed in Yemen for the first time in 50 years, replacing a contingent of US forces in Al Mahrah governorate in early August to monitor Iranian maritime activity (Intelligence Online, 7 September 2021).

In Saudi Arabia, Houthi forces launched multiple drone attacks targeting Khamis Mushait and Abhab airport last week, following a relative lull in activity over the previous month. Although all strikes were reportedly intercepted by Saudi forces, fragments from a strike on 31 August injured eight airport workers and damaged a A320 passenger aircraft. The increase in attacks against Saudi Arabia coincided with renewed clashes along the Marib frontlines.

In northwest Syria, regime forces clashed with opposition and Islamist factions along frontlines in the rebel enclave, despite a significant decline in regime shelling in the region. Regime forces, however, continued to target residential areas, resulting in at least 24 civilian fatalities. Meanwhile, Russian forces continued their aerial campaign in northwest Syria with 32 aerial sorties carried out in Idleb, Lattakia, and Aleppo provinces. Russian forces targeted the Turkey-backed Al Sham Corps camp and headquarters in Afrin district of Aleppo on 31 August – the first aerial attack by Russia on the district since its takeover by Turkey in early 2018 (Akmckeever, 3 September 2021). The airstrike coincided with a surge in attacks by Turkish and opposition forces against the Kurdish People’s Protection Units (YPG) in northern Aleppo, as well as the Syrian Democratic Forces (QSD) in northeast Syria. The Turkish escalation has had an impact on Russia’s mediator role in Syria on both sides of the Euphrates.

In southern Syria, a Russian-brokered agreement was reached between the Dar’a Central Committee and the Syrian Syrian regime in an effort to end the regime’s months-long blockade and attempted takeover of Dar’a Al Balad district (Al Monitor, 3 September 2021). Under the agreement, a ceasefire came into effect on 31 August as Russian military police and the regime’s security committees entered Dar’a Al Balad. The agreement further stipulates the surrender of several wanted individuals, both local and former rebels, as well as the surrender of some light and medium weapons. Negotiations over the extent of future regime control are ongoing and several regime demands have been rejected amid concerns that the regime may attempt to assume de facto control of the area.

In northern Iraq, fighting between the Turkish military and PKK militants escalated in the last four weeks compared to July 2021. The escalation is mostly driven by fighting in Duhok province. Turkish forces also intensified aerial operations across Iraq.

In Palestine’s Gaza Strip, violent demonstrations erupted along the border with Israel over the Israeli blockade. Israel has blocked the movement of goods and people in and out of the Gaza Strip since Hamas took control in 2007, tightening the blockade following fighting with Hamas and its allies in May of this year (NPR, 28 August 2021). Following calls by Hamas and Palestinian National and Islamic Forces, nightly demonstrations have been held across the border since 21 August, with violent clashes erupting between Palestinian demonstrators and Israeli soldiers. Three Palestinians — including a teenage boy — and an Israeli soldier were killed during the riots. Further intensifying the violence, Palestinian militants launched several incendiary balloons into Israel, sparking fires. In retaliation for the attacks, Israel conducted at least 12 airstrikes during the month of August, targeting Hamas assets and tunnels. Meanwhile, an agreement was reached for the resumption of Qatari aid to the Gaza Strip, marking a significant advance in efforts to shore up the ceasefire between Israel and Hamas (Times of Israel, 6 September 2021). Qatari cash payments of 30 million USD per month to operate Gaza’s only power plant, pay public servants, and help needy families were halted in May over Israeli claims that the money was being used by armed groups (Al Jazeera, 6 September 2021)

Clashes between Palestinian demonstrators and Israeli security forces also continued during the weekly anti-settlement demonstrations in several locations in the West Bank, including in Kafr Qaddum, Bayta, and Bayt Dajan. In Bayta, a demonstration on 6 August turned deadly when a Palestinian was fatally shot. Since May, Palestinians have been demonstrating in Bayta against an illegal Jewish outpost set up nearby. While the Israeli army evacuated the outpost in early July, troops remain stationed there while Israeli authorities deliberate on its approval. This would allow settlers to permanently take up residence there (France24, 6 August 2021).

In another development in the West Bank, a clash broke out at the Jenin refugee camp between a group of armed Palestinians and Israeli security forces during an arrest raid. Four Palestinians were killed during the clash. Jenin has become a hot bed of armed confrontation between Palestinian armed groups and Israeli security forces in 2021. More than a dozen armed clashes have been reported in Jenin in 2021, marking a significant increase compared to previous years.

Meanwhile, unidentified militants in southern Lebanon fired rockets toward Israel on 4 August, igniting a large fire. No group has claimed responsibility for the attack, but it is likely that it was conducted by Palestinian factions, which have fired sporadically on Israel in the past (Haaretz, 9 August 2021). Consequently, Israel shelled southern Lebanon and conducted an airstrike on 5 August, claiming to have struck “the launch sites and infrastructure” associated with the attack (Reuters, 5 August 2021). This marks the first time that Israeli fighter jets have struck targets inside Lebanon since 2014 (Times of Israel, 12 August 2021). Hezbollah retaliated with rocket fire into Israel on 6 August, warning of an escalation of attacks if Israel did not stop its airstrikes (France24, 5 August 2021). Despite Israel responding with artillery fire the following day, cross-border hostilities have since ceased.

Lastly, demonstrations over the deteriorating economic conditions, fuel shortages, and recurring power outages in Lebanon continued throughout August. The number of demonstration events peaked during the second and third weeks of August after the Central Bank Governor announced the end of fuel subsidies to relieve pressure on diminishing currency reserves (The961, 11 August 2021). Demonstrations further intensified following a fuel tank explosion in northern Lebanon that killed at least 28 people; the explosion occurred after the army seized the tank to distribute the smuggled fuel among people (Al-Monitor, 18 August 2021). The number of demonstration events, however, has decreased in the last two weeks. The fall in events follows a decision by Lebanese leaders to maintain fuel subsidies for the short-term, and a recent army crackdown on fuel smugglers and gas stations hoarding petrol (VOA, 21 August 2021).

Ameneh Mehvar is the Middle East Research Manager at ACLED, and an ESRC postdoctoral fellow at the University of Birmingham. She holds a PhD in International Relations and a master’s degree in Middle East and Central Asian Security from the University of St Andrews. Her research interests include political psychology, security studies, and the international politics of the Middle East. Ameneh is fluent in Persian, English and German, and has a working knowledge in Arabic.
Emile Roy

Emile Roy is an ACLED Researcher. He has covered political violence and protest in Yemen and has also contributed to the ACLED-Religion pilot project tracking religious repression and disorder in the Middle East and North Africa.
Tarek Albaik