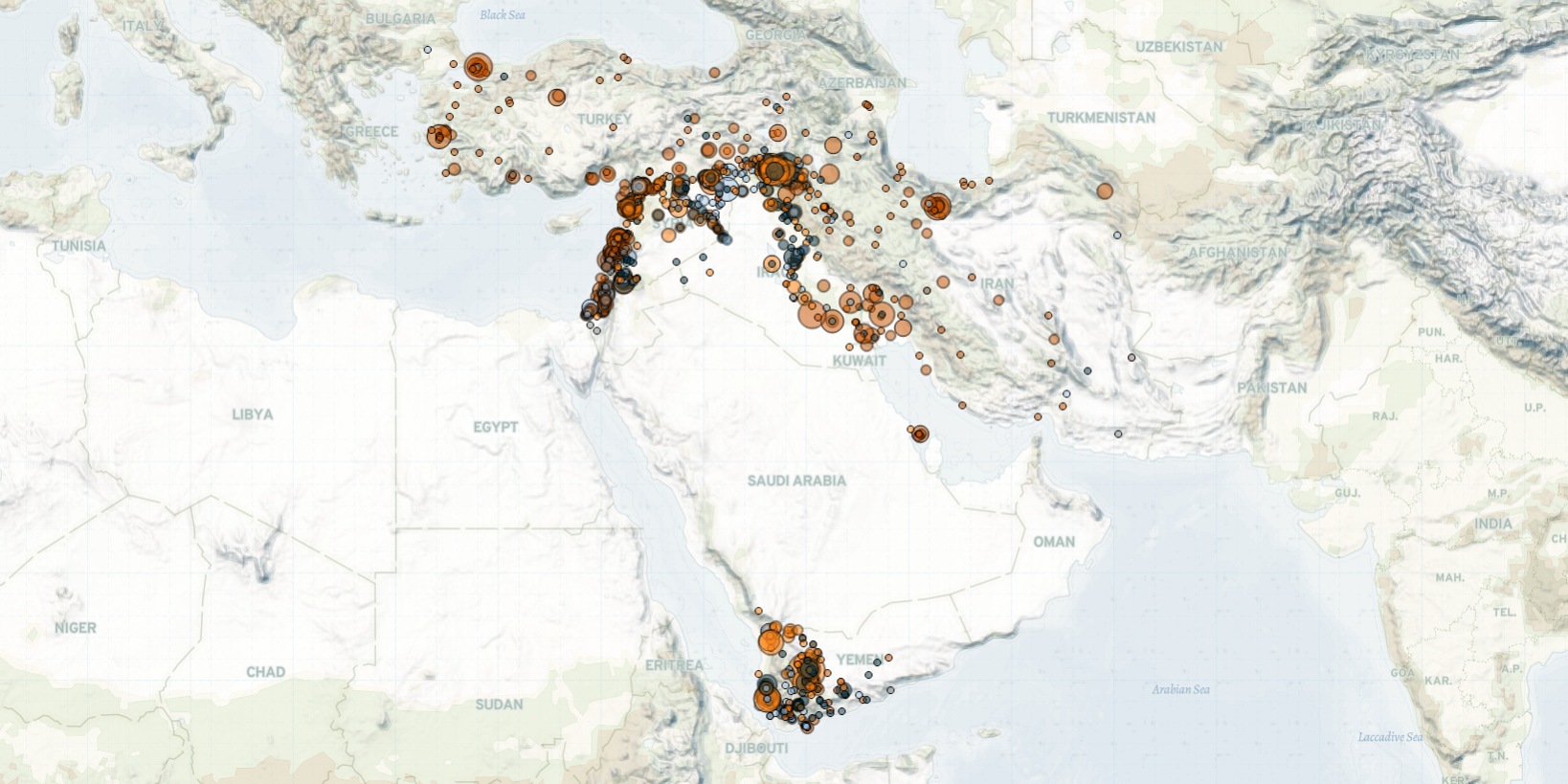 Last week in the Middle East, the number of Saudi-led coalition airstrikes surged in Taizz and Sadah governorates in Yemen. At the same time, overall levels of political violence decreased in Yemen, including in Marib. In Saudi Arabia, a Houthi attack caused civilian injuries for the second time in two weeks. In Syria, regime forces resumed military operations in Dar’a city after negotiations with the Dar’a Central Committee once again reached a deadlock. In Iraq, the Islamic State (IS) carried out a deadly attack against Iraqi Federal Police in Kirkuk province. Meanwhile, Iran’s Islamic Revolutionary Guard Corps (IRGC) forces launched drone and shelling attacks on Iranian Kurdish rebel bases in Iraqi Kurdistan. In another development, the escape of six high-security Palestinian prisoners from an Israeli prison led to heightened tensions throughout the occupied West Bank. Lastly, a new government was formed in Lebanon.

In Yemen, although overall levels of political violence decreased last week, there was a significant increase in Saudi-led coalition airstrikes on Taizz and Sadah governorates. In Taizz, the number of airstrike events last week was the most recorded in a week since May 2018.1Note that one airstrike event can include several airstrikes and that the number of airstrikes can greatly vary from one event to another. As ACLED is an event-based dataset, ACLED records airstrike events rather than airstrikes. This ensures consistency in the data especially given the overall rare reporting on exact airstrike counts. In Sadah, the Houthi stronghold in northwestern Yemen, last week marked the second week this year with the most airstrike events. This increase in airstrike events is most likely a response to continued Houthi attacks on Saudi Arabia. In Taizz, the Saudi-led coalition targeted missile platforms that Houthi forces have used to target Saudi Arabia (Khabar News Agency, 8 September 2021).

In Marib governorate, clashes between pro-Hadi and Houthi forces decreased considerably last week while Saudi-led coalition airstrikes remained at sustained levels. Most activity was concentrated in Sirwah district, west of Marib city, after Houthi forces announced the takeover of the Rahabah district in the south of the governorate on 4 September. After the increase in clashes the week before, some analysts argue that the Houthis might try to garner significant gains ahead of 21 September, which will mark the seventh anniversary of their takeover of Sanaa (Twitter @Alsakaniali, 1 September 2021).

In Saudi Arabia, Houthi forces claim to have targeted facilities of the Saudi ARAMCO oil company in Jizan, Najran, and Dammam with drones and ballistic missiles. Saudi defense forces intercepted all of those — albeit without acknowledging the alleged targets. Fragments from the attack on Damman left two children injured. This marks the second attack on Saudi Arabia in two weeks in which civilians were injured. The last time that such consistent civilian casualties stemming from Houthi drone or missile attacks were reported was in July 2019.

In northwest Syria, Russian warplanes carried out airstrikes on the Idleb countryside, resulting in several civilian injuries. On 7 September, a Russian airstrike targeted a Hayat Tahrir Al Sham (HTS) weapons depot in the Ma’arrat Tamasrin area, though no fatalities were reported. Meanwhile, regime forces shelled Al Dabbit neighborhood in Idleb city along with the city’s eastern outskirts, with three civilians killed in the shelling barrage. In northern Aleppo, clashes continued between opposition rebels and the Peoples’ Protection Units (YPG) amid an exchange of shelling barrages between both sides. Meanwhile, an artillery attack by the YPG targeted a Turkish position in the Menbij area on 7 September, killing a Turkish soldier and wounding four others (Middle East in 24, 7 September 2021).

Russian warplanes also continued their aerial campaign against IS in the Syrian desert last week; this is in response to IS militants carrying out several attacks against regime and pro-regime militia forces last week. In the Ithariyah desert in Hama, IS attacked a joint regime and Liwa Al Baqir position, killing eight fighters. In Homs desert, an IED planted by an unidentified armed group targeted a Russian armored vehicle, destroying the vehicle and killing a soldier (RT, 9 September 2021).

In southern Syria, the regime’s 4th Armored Division resumed military operations in the Dar’a Al Balad district of Dar’a city, after negotiations with the Dar’a Central Committee once again reached a deadlock. Several civilians were killed or injured in the shelling, which also caused structural damage to Al Omari mosque (Anadolu Agency, 5 September 2021). This comes after a number of wanted individuals refused to be evacuated to northern Syria, demanding they would only surrender if they get either transferred to Turkey or Jordan.

In Iraq, IS militants carried out an attack against an Iraqi Federal Police checkpoint in Rashad district in Kirkuk on 5 September. IS attacked the checkpoint with small arms before detonating a roadside IED targeting a reinforcement convoy. Iraqi police sustained at least 12 fatalities. The attack is one of the deadliest IS attacks targeting Iraqi security forces in 2021.

In Palestine, tensions rose in the West Bank after five members of Palestinian Islamic Jihad and one prominent former commander of Al Aqsa Martyrs Brigade — all from the flashpoint city of Jenin — escaped from an Israeli prison through a tunnel dug beneath their cell (France24, 6 September 2021). Israeli security forces launched a massive search and imposed reprisal measures against Palestinian prisoners, including solitary confinement and banning family visits (Arab News, 12 September 2021). Four of the fugitives have since been captured (Al Jazeera, 11 September 2021). Israeli security force actions prompted dozens of rallies and riots throughout the West Bank. A previous large-scale jailbreak from an Israeli jail in 1987 is associated with the start of the first Palestinian intifada (New York Times, 7 September 2021).

Lastly, a new government was formed in Lebanon on 10 September, breaking a 13-month political deadlock. New Prime Minister Najib Mikati — a billionaire telecommunications tycoon — had previously served as caretaker premier in 2005 and as prime minister between 2011 and 2013 (Al-Monitor, 10 September 2021). Mitaki — who was nominated with the backing of the Shiite Hezbollah and Amal Movement, as well as the Sunni leader of the Future Movement Saad Hariri — reportedly reached a last-minute agreement with President Michel Aoun over the cabinet’s make-up under heavy international pressure (Arab News, 10 September 2021). His cabinet is expected to negotiate a bailout package with the International Monetary Fund and to pursue reforms to curb the financial and economic crises in the country (France24, 10 September 2021). Critics have, however, argued that Mikati is part of the same political elite responsible for the country’s economic woes, and is unlikely to implement wide-reaching reforms (New York Times, 10 September 2021). The new government will have to navigate tensions and the public anger when fuel subsidies are lifted at the end of September (Al Jazeera, 13 September 2021), likely to lead to renewed demonstrations.