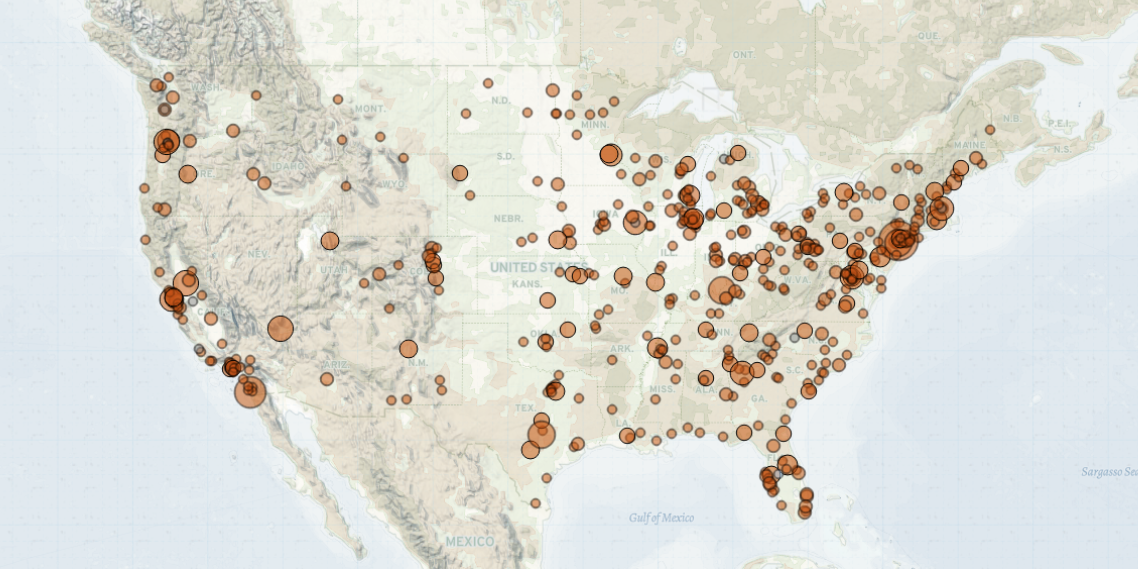 Last week, the overall number of events related to COVID-19 decreased for the fourth consecutive week. The continued decline is a possible indicator of protest fatigue after demonstrations related to the pandemic peaked in early August, following the 27 July advisory from the Centers for Disease Control and Prevention (CDC) that all Americans wear masks indoors (Intelligencer, 7 August 2021). Nevertheless, despite a precipitous decline compared to the week prior, COVID-19-related demonstrations continued to vastly outnumber other demonstrations. A drop in demonstrations against COVID-19 restrictions largely accounts for the decline, as demonstrations against in-school mask mandates decreased by more than half. Demonstrations against vaccines and vaccine mandates declined last week as well, but at a more moderate level. Anti-vaccine sentiment also led to violence during the week: on 16 September, three people punched and scratched a Manhattan hostess when she asked for proof of coronavirus vaccination, a requirement for indoor dining in the New York borough. The hostess reportedly required hospitalization following the attack (for more on COVID-19 demonstration trends during the first year of the pandemic, see A National Emergency: How COVID-19 is Fueling Unrest in the US).

Demonstrations related to Texas Senate Bill 8, which effectively outlaws abortions, decreased slightly last week. Demonstration events against the bill took place in the District of Columbia and seven states, including in Texas, outnumbering reported pro-life demonstrations nationwide. In addition, demonstrators in Florida, Minnesota, and South Carolina protested similar proposed or enacted, though not yet enforced, anti-abortion legislation in their respective states. ‘Heartbeat bills,’ or bills that ban abortions after a fetal heartbeat can be detected — typically around six weeks after conception — have been proposed, although not passed, in both Florida and Minnesota, with legislators in Florida claiming they will attempt to copy Texas Senate Bill 8. In South Carolina, abortion is already banned from the moment a heartbeat is detected, but the law is not yet operative (Newsweek, 16 September 2021; Forbes, 2 September 2021). Texas Senate Bill 8 has sparked national reconsideration of abortion access, most notably with the announcement on 17 September that the US Supreme Court will reconsider the constitutionality of state interference in abortion access as established in the landmark 1973 Roe v. Wade case (Politico, 17 September 2021).

Meanwhile, militia groups reportedly participated in multiple training and demonstration events last week. The American Contingency group doubled its firearms training events last week compared to the week prior, holding eight training sessions in Arkansas, Nevada, Missouri, and Utah. In addition, the Yavapai County Preparedness Team (YCPT), an offshoot of the Oath Keepers, held a recruitment event in Arizona. In Boise, Idaho, more than 1,000 people, including members of the People’s Rights and Idaho Liberty Dogs militia groups, as well as multiple Republican elected officials, rallied outside a meeting of the National Interagency Fire Center that President Joe Biden attended (News & Observer, 14 September 2021). Demonstrators rallied against President Biden’s vaccine policies and supported renewed calls to ‘stop the steal’ — a false assertion that former President Donald Trump won the 2020 presidential election (for more on the ‘Stop the Steal’ movement see, ACLED’s The Future of ‘Stop the Steal’: Post-Election Trajectories for Right-Wing Mobilization in the US). In Washington, DC, members of the Boogaloo movement participated in an isolationist and anti-war demonstration on 11 September alongside various other groups. On the same day, Groyper Army affiliates demonstrated alongside supporters of former President Trump in Tarpon Springs, Florida to advocate for a far-right candidate to challenge Republican Senator Marco Rubio’s seat.

Openly white supremacist groups were also active last week. On the 20th anniversary of the 11 September attacks, the Goyim Defense League, a neo-Nazi group, demonstrated in Berkeley, California. They dropped a banner that echoed the false conspiracy theory that the attacks were secretly perpetrated by Jewish people. Finally, on 13 September, a man driving a truck covered with white supremacist and satanic symbols was arrested outside the Democratic National Committee headquarters in Washington, DC on weapons charges. The man claimed to be ‘on patrol’ and reportedly espoused white supremacist rhetoric after he was approached by police officers.