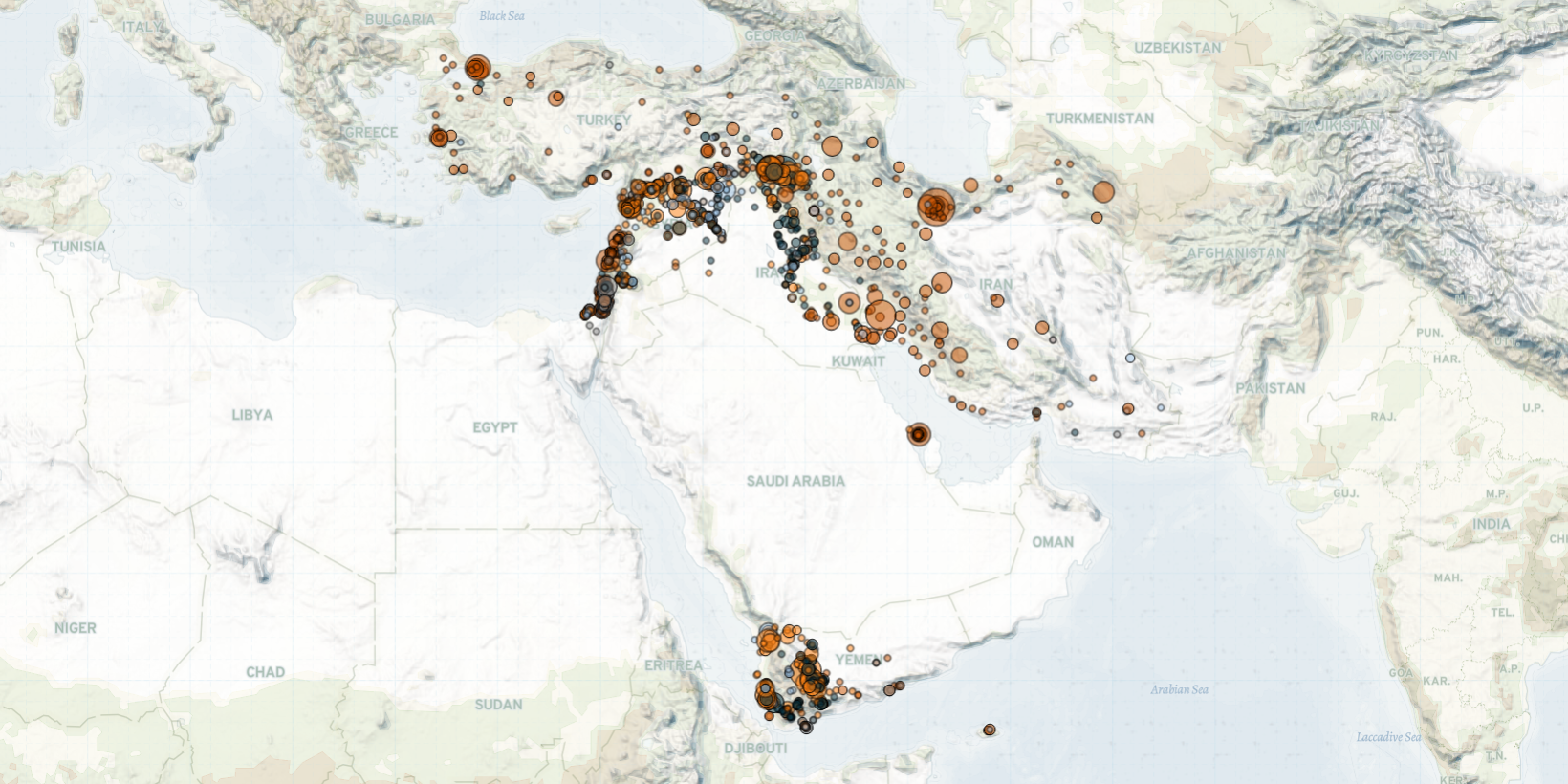 Last week in the Middle East, Houthi forces continued their offensive in the southern parts of Marib governorate in Yemen. In Syria, Russian warplanes carried out airstrikes on a Hamza Brigade camp in Afrin district of Aleppo. Meanwhile in Iraq, hundreds of demonstrators took to the streets in major cities to mark the anniversary of the October Revolution movement (Al Jazeera, 1 October 2021). In Turkey, a Democracy and Progress Party (DEVA) executive was attacked, and rioters vandalized Syrian properties in Izmir. Meanwhile, in Iran, school teachers continued protests demanding better working conditions. Lastly, armed clashes erupted between Palestinians and Israeli military forces in the West Bank, leading to fatalities.

In Yemen, Houthi forces continued their offensive in the south of Marib governorate last week. Despite resistance from pro-Hadi forces and tribes with Saudi-led coalition air support, Houthi forces advanced within Al Jubah and Harib districts, where they captured several strategic sites. Houthi forces captured Al Khashinah military camp in Al Jubah district before they were forced to retreat under heavy Saudi-led coalition airstrikes. Conflicting reports on which group is in control of Al Khashinah and Umm Rish camps, both in Al Jubah district, have continued throughout the week (Al Mashhad Al Yemeni, 1 October 2021; Yemen Press Agency, 1 October 2021). Houthi forces also continue to surround pro-Hadi forces in Al Abdiyah district, where some claim that over 30,000 civilians have been besieged (Twitter @Alsakaniali, 29 September 2021).

Last week also marked the 59th anniversary of the start of the ‘26th September Revolution’ – an eight-year (1962-1970) conflict that saw supporters of the Yemen Arab Republic overthrow the Zaidi Mutawakkilite Kingdom of Yemen that had ruled over North Yemen since 1918. The Houthis, also of the Zaidi sect, are understood by some observers to want to reinstate the Imamate (Middle East Institute, 6 May 2021). In Hajjah and Sadah governorates, Houthi forces targeted celebratory gatherings and killed a number of civilians and military forces.

In Dar’a province, Syrian regime forces and Russian military police entered several towns and villages in the Yarmouk Basin area, including Sahm Al Golan and Ash-Shajara, as part of the reconciliation agreement reached earlier with the Dar’a Central Committee.

Last week in Turkey, unidentified assailants shot at a local DEVA executive while he was in his car in Kiraz district, Izmir, though reports suggest that the executive sustained no injuries. This comes following an attack by unidentified gunfire on the DEVA office in Arnavutkoy, Istanbul on 21 September. At this time, it is unclear who is behind the attacks and whether they are linked. The opposition DEVA is led by former Deputy Prime Minister Ali Babacan and vows to bring about a broad spectrum of change in the country, including a resolution to the ongoing migration crisis (Foreign Policy, 25 June 2020). Meanwhile, a group of 150 rioters attacked and vandalized Syrian-owned shops in Torbali town, Izmir, though with no reports of casualties. Tensions between Syrian migrants and Turkish locals have risen in the aftermath of a fight involving members of the local Syrian and Turkish communities, which resulted in the death of a 17-year old Turk (Stockholm Centre for Freedom, 1 October 2021).

In Iran, teachers continued their nationwide protests last week for a second week, calling for improved working conditions. On 25 September, protests were observed in more than 40 cities to coincide with the start of the new school year. Teachers also demand the approval of legislation that will establish a ranking system, which would enable their salaries to be raised in accordance with their acquired ranks (Iran International, 25 September 2021). Protests were attended by both active and retired teachers. Shortly after he was elected in August 2021, Iranian President Ebrahim Raisi blocked an increase in teachers’ salaries that had been approved by the previous government in June 2021, stating it would have been too difficult to implement given Iran’s budget deficit (Centre for Human Rights in Iran, 16 September 2021).

Lastly, in Palestine, five Palestinians were killed, and two soldiers were wounded, in armed clashes between the Hamas Movement, Palestinian Islamic Jihad (PIJ), and Israeli soldiers in Bayt Anan and Birqin on 26 September. Another armed clash between the PIJ, unidentified Palestinian armed groups, and Israeli soldiers also occurred on 30 September, leaving a PIJ member dead and two others wounded. The clashes resulted in several protest events calling for the return of the bodies of the deceased Palestinians fighters. Meanwhile, a woman was shot dead at the Al Aqsa compound in Jerusalem’s Old City as she attempted to carry out a stabbing attack on an Israeli policeman. Finally, Israeli soldiers opened fire at a group of Palestinian farmers in the Al Maghazi refugee camp, in the Gaza Strip, killing one farmer. No reason was reported for the attack.