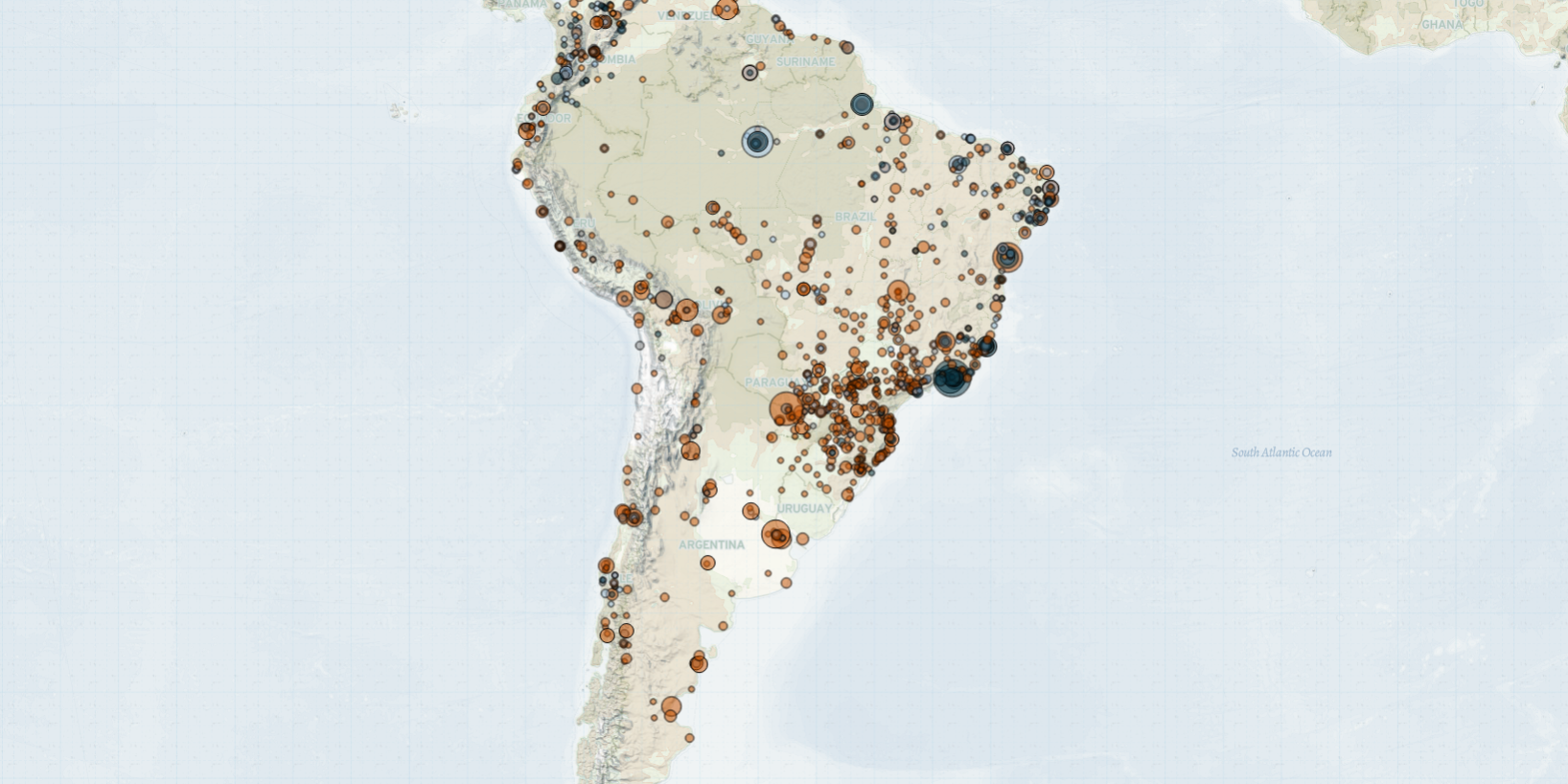 Last week in South America, armed clashes between state forces and organized criminal groups, as well as between criminal groups, continued to be reported in Brazil. In Paraguay, farmers and indigenous groups demonstrated against a bill that increases the criminal punishment for private property occupations, while attacks against political candidates increased ahead of municipal elections. In Bolivia, clashes between coca leaf growers and the police continued amid a dispute over the control of a coca market association. In Colombia, military forces bombed a camp from a dissident faction of the Revolutionary Armed Forces of Colombia (FARC). Finally, in Chile, locals took to the streets to demand greater government control of illegal border crossing paths, amid a growing number of Venezuelan citizens entering the country.

In Brazil, armed clashes between state forces and organized criminal groups continued at similar levels last week compared to the week prior. In Rondinha city, Rio Grande do Sul state, state forces clashed with a drug trafficking group, killing three traffickers. At the time of the clash, the group was reportedly plotting to kill rival drug traffickers and civilians in retaliation for the earlier killing of a member of their group (G1, 28 September 2021). Meanwhile, clashes between criminal groups increased last week compared to the week before. Disputes for territorial control were reported for the third consecutive week in Vitória city and the surrounding metropolitan area, in Espírito Santo state (G1, 29 September 2021). Ongoing fighting in the area has led to the disruption of school classes, and several civilian houses have been hit in the crossfire (G1, 29 September 2021).

In Paraguay, small farmers and indigenous groups took to the streets last week, calling on congress to reject proposed changes to Article 142 of the penal code, which would raise the punishment for private property occupations to a maximum of 10 years imprisonment. These groups claim that the bill criminalizes their fight for peasant land ownership, and supports the appropriation of Guarani and Indigenous land by landowners (CNN, 29 September 2021; Reporta Paraguay, 29 September 2021). The bill was approved by the lower house of congress on 29 September with a majority of 49 votes, and enacted by President Mario Abdo Benítez on the following day (Ultima Hora, 30 September 2021). In the capital, Asunción, demonstrators set fire to cars and clashed with police near the legislative building, resulting in injuries to at least seven police officers (ABC, 29 September 2021). Land distribution and inequality is a pressing issue for Paraguay. Peasants and Indigenous people had their lands taken away and then handed over to landowners or people close to the military dictatorship of Alfredo Stroessner between 1954 and 1989 (BBC, 30 September 2021).

Moreover, two municipal council candidates were killed last week, ahead of municipal elections to be held across Paraguay on 10 October 2021. In Pedro Juan Caballero city, in Amambay department, a candidate from the Unite Ourselves Party was killed outside his house after taking part in a protest against the bill on Article 142. He had previously been the victim of another attack, reportedly linked to complaints that he had filed against the sitting Authentic Radical Liberal Party (PLRA) mayor (ABC, 30 September 2021). On the same day, in Nueva Germania city, San Pedro department, a candidate from the Christian Democratic Party was shot dead. An employee from the Agriculture Ministry was also killed in the attack. In both cases, the perpetrators remain unknown (ABC, 1 October 2021). In previous weeks, a candidate from the National Republican Association – Colorado Party (ANR) was also killed by a PLRA city councilor in Itakyry, Alto Paraná department. So far this year, at least five attacks, resulting in at least six fatalities, have been reported against candidates for the upcoming municipal elections. Attacks motivated by political rivalries are common in the country, particularly between the two main parties, the PLRA and the ANR, although the number of attacks has significantly increased in recent weeks ahead of the election.

In Bolivia, after a weekend respite, clashes between coca leaf farmers and police forces flared anew on 27 September over control of the Association of Coca Leaf Producers (ADEPCOCA) market and offices in the Villa Fatima, Villa El Carmen and Chuquiagiullo neighborhoods of La Paz. Confrontations were recorded for three days in a row, bringing the number of injuries and arrests reported during the 11-day standoff to 32 and 69, respectively (El Deber, 1 October 2021). An ongoing leadership dispute within ADEPCOCA escalated after a contested election for the ADEPCOCA presidency on 20 September ended with a pro-government candidate declared as the winner. Opposition coca growers claim that the ruling Movement for Socialism-Political Instrument for the Sovereignty of the Peoples (MAS-IPSP) is trying to seize greater control of the legal coca trade (Reuters, 28 September 2021). ADEPCOCA is tasked with controlling the market for legalized coca — the raw ingredient for cocaine – which is widely used in traditional medicine in Andean countries (Reuters, 28 September 2021).

In Colombia, several armed clashes and remote explosive events were reported last week. Military forces bombed a dissident camp of the FARC in a remote area of Guainía department, near the Brazilian border, resulting in the deaths of at least 10 fighters (24 France, 28 September 2021). Additionally, at least four landmine and remote explosive attacks — one of them carried out by the 30th Front of the FARC —  were reported in the departments of Norte de Santander, Nariño, and Meta, resulting in at least three fatalities – two of them soldiers — and six injuries. Explosions and remote violence considerably increased in September 2021 compared to the month prior, mainly directed towards soldiers carrying out operations against armed groups.

Finally, in Chile, tensions between locals and police increased last week amid a growing migrant crisis in the northern region of Tarapacá. In the region’s capital, Iquique, nearly 3,000 people took to the streets to demand stronger government control of illegal crossing paths across the borders with Peru and Bolivia, to prevent the entrance of Venezuelan migrants (France 24, 25 September 2021). Police intervened to control isolated scuffles provoked by Chilean residents who tried to attack Venezuelan migrants on the streets of Tarapacá. A group of demonstrators also set fire to a small camp of migrants, burning their tents, mattresses, and other belongings, though no injuries were reported.