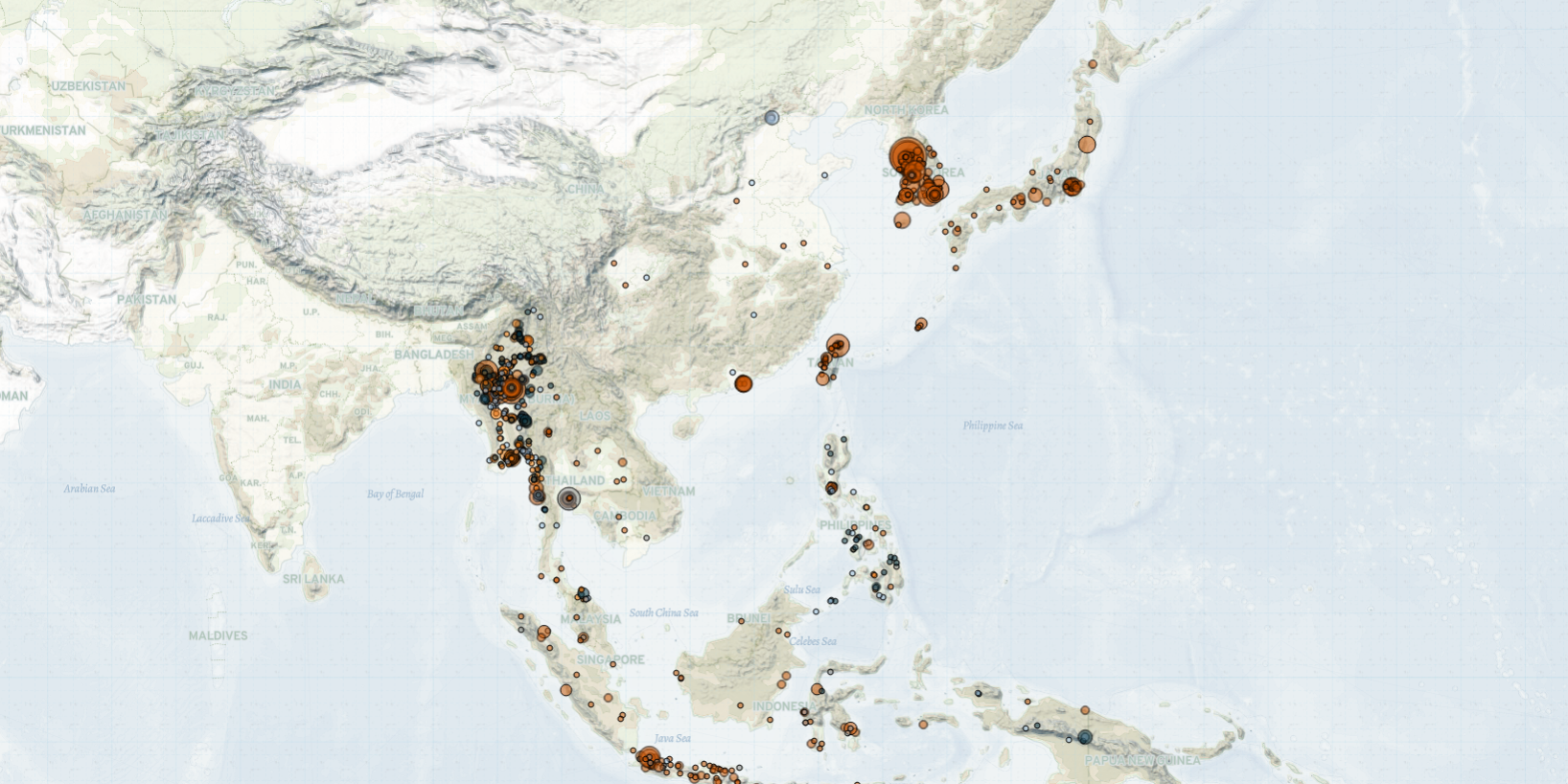 Last week in East and Southeast Asia, attacks against military-owned businesses and military-linked individuals in Myanmar continued. Meanwhile, deadly clashes between the Myanmar military and local defense groups continued in Sagaing region. In Thailand, rallies marking the anniversary of the 6 October 1976 massacre were reported last week across the country. Also, in Thailand, the military continued counterinsurgency operations in the Deep South. In Indonesia, events related to land disputes increased last week, while inter-tribal violence led to six deaths in Papua province. North Korea reopened dormant communication lines with South Korea. In South Korea, civic groups and members of the main opposition People Power Party (PPP) protested to demand an investigation into a land development scandal allegedly involving the ruling Democratic Party of Korea (DPK) presidential contender. In the Philippines, the Department of Justice (DOJ) announced last week that criminal charges may be filed against around 150 police officers involved in 52 deaths resulting from police anti-drug operations.

In Myanmar, one month after the National Unity Government (NUG) declared a “people’s defensive war” on 7 September, attacks targeting military-owned MyTel telecommunication towers continue (CNN, 7 September 2021). Last week, over a dozen towers were bombed using improvised explosives in Ayeyarwady, Bago, Magway, Mandalay, Sagaing, and Yangon regions, and in Mon state. Since 7 September, ACLED records over one hundred explosions targeting MyTel telecommunication towers. Local defense groups have since claimed responsibility for over one-third of these attacks, intended to cut off revenues to the military (RFA, 16 September 2021). No groups have claimed responsibility for the remainder of the events.

In Sagaing region, clashes between military forces and local defense groups were reported in several townships last week. Notably, in Pale township, local defense groups reportedly killed dozens of soldiers during a series of ambushes targeting military troop convoys on 3 and 4 October. The local defense groups have stated that the attacks were intended to intercept military reinforcements travelling to the Yaw region in northern Magway (Myanmar Now, 4 October). In response to the attacks, state forces continued deadly crackdowns on residents in these areas, resulting in civilian fatalities.

Meanwhile, in the Deep South of Thailand, the military continued to stage raids on Malay Muslim separatists in Hutae Yuelo last week, resulting in deaths of both military and separatist forces. Malay Muslim separatists set up explosions and caused disturbances in other areas to distract the authorities from their encirclement mission in Hutae Yuelo. Military sources have suggested that violent incidents during this period in the Deep South are tied to gaps in officer deployment coinciding with the end of the military fiscal year in October (Isranews Agency, 4 October 2021). They have suggested that Malay Muslim separatists exploit this as an opportunity to stage attacks (Isranews Agency, 4 October 2021).

Last week in Indonesia, there was an increase in the number of events related to land disputes compared to the week before. In West Java province, armed members of the South Indramayu Society Communication Forum (FKAMIS) killed two farmers at a sugarcane plantation in Amis village, Indramayu regency. FKAMIS has allegedly been attempting to take control over the land from a sugar factory that currently manages the plantation (1news, 5 October 2021). Several protest events were staged across the country, calling for the government to resolve ongoing land disputes. A lack of proper land ownership registration in Indonesia continues to foment land disputes involving civilians, corporations, and the government (Detik, 8 October 2021). While the government has attempted to create a single database of land use and tenure maps under the ‘One Map’ policy, the platform has been criticized for a lack of public access and a failure to  include maps created by Indigenous groups (Reuters, 31 March 2021).

Meanwhile six people were killed in Papua province last week when armed members of the Kimyal tribe attacked residents from the Yali tribe in Dekai district, Yahukimo Regency. The attack was allegedly linked to a rumor that the former regent of Yahukimo, who was a member of the Kimyal tribe, had been killed by members of the rival tribe (Kompas, 3 October 2021). The former regent died of a heart attack in Jakarta on 3 October (1news, 4 October 2021). Thousands of residents fled from Dekai following the attack.

In South Korea, civic groups, lawmakers, and presidential contenders from the opposition PPP took to the streets last week, calling for an investigation into corruption allegations against the ruling DPK’s presidential contender, Lee Jae-myung, over his involvement in a development project scandal. During his mayoral term in Seongnam city, Lee allegedly granted favorable treatment to a company to manage a development project because of his relationship with the company’s owner (Korea JoongAng Daily, 30 September 2021). The upcoming presidential election is scheduled for 9 March 2022.

Last week in the Philippines, the DOJ announced the completion of a review into 52 deaths during police anti-drug operations (Manila Bulletin, 3 October 2021). The DOJ states that the review may lead to criminal charges against some 150 police officers (Sunstar, 3 October 2021). However, the 52 deaths that are currently under investigation remain a very small fraction of even the government’s own number of acknowledged deaths resulting from anti-drug operations, which is equal to approximately 6,000 deaths to date (Karapatan, 7 October 2021). With the results of the DOJ investigation into the 52 drug war deaths remaining hidden from the public, the United Nations (UN) High Commissioner for Human Rights Michelle Bachelet called for transparency and for publication of the findings (Rappler, 7 October 2021). A lack of such transparency has long been an issue in the country, with media working to report on such issues often targeted; last week, Maria Ressa was awarded the Nobel Peace Prize, recognizing her work in reporting on such trends in the Philippines, despite attacks on press freedom in the country (The Guardian, 12 October 2021). The government said that the investigation’s findings will eventually be made public (Manila Bulletin, 8 October 2021). ​​The DOJ announcement comes a few weeks after the International Criminal Court (ICC) started an investigation into crimes against humanity allegedly committed by state forces in the Philippines between 1 November 2011 and 16 March 2019 within the context of the ‘war on drugs’. The ICC has the mandate to intervene when member states are unable or unwilling to prosecute such crimes (Al Jazeera, 15 September 2021). The government previously said that it will not cooperate with the ICC investigation because the country’s justice system is functioning (Rappler, 16 September 2021).