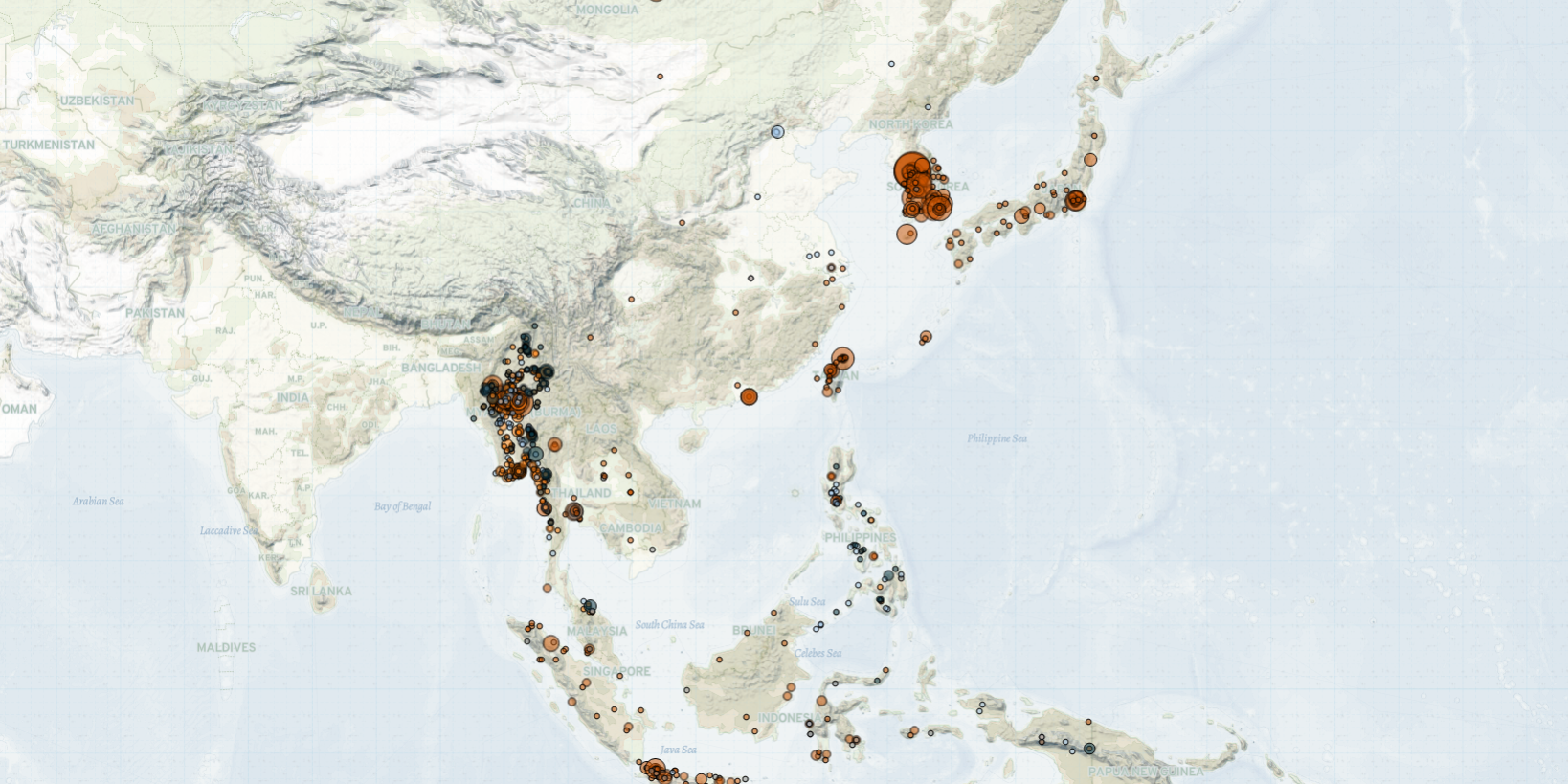 Last week in East and Southeast Asia, Myanmar military forces clashed with the Karen National Union/Karen National Liberation Army (KNU/KNLA) in Kayin state. Meanwhile, the Association of Southeast Asian Nations (ASEAN) barred the head of the Myanmar military regime from attending the ASEAN summit beginning on 26 October, instead offering an invite to a non-political representative. In Indonesia, state forces shot a Papuan miner during an eviction operation at a mining site. North Korea test-fired a new type of submarine-launched ballistic missile (SLBM). In South Korea, workers affiliated with the Korean Confederation of Trade Unions (KCTU) held mass rallies across the country to demand better work conditions. Lastly, in Taiwan, a series of rallies were reported ahead of a vote to recall a legislator on 23 October.

In Myanmar, clashes between the Myanmar military and the KNU/KNLA broke out in Kawkareik and Kyainseikgyi townships in northern Kayin state last week. On 20 October, military forces reportedly pushed into KNU-controlled territory in Kyainseikgyi township, prompting the firefight. The clash came as military sources confirmed reports that additional troops had been deployed to northern Kayin state to counter the KNU/KNLA, which the regime has accused of providing military training to People’s Defense Force (PDF) members (Karen News, 18 October 2021).

Meanwhile, ASEAN announced on 16 October that the regime chief, Min Aung Hlaing, would not be invited to attend the ASEAN summit starting on 26 October. ASEAN cites a lack of cooperation from the regime in taking action on the agreed points in the Five-Point Consensus reached between them in April (RFA, 19 October 2021). The Five-Point Consensus calls for an immediate cessation of violence in Myanmar, constructive dialogue among all stakeholders, the appointment of an ASEAN special envoy, the provision of humanitarian assistance, and a visit by the envoy to Myanmar. The decision marks a rare move by the bloc, known for its united decision-making, non-interference, and engagement (Reuters, 26 October 2021). The regime has since responded sharply to the decision, asserting its right to a ministerial representative at the summit according to the ASEAN charter. The regime vows to pursue “due processes under the ASEAN Charter and the Protocol to the ASEAN Charter on Dispute Settlement Mechanisms in resolving the differences on Myanmar’s representation at the ASEAN Meetings” (RFA, 25 October 2021).

In Indonesia, Papuan traditional gold miners clashed with police and private security forces last week during a demonstration against evictions at a Freeport McMoRan Grasberg mine in Mimika regency, Papua province. At the time of the clash, security forces were carrying out an eviction at a make-shift camp set up by traditional miners panning for gold in the nearby river, where the company dumps its mining residue. Police reportedly shot and seriously injured a Papuan miner. The Freeport McMoRan company and the Indonesian government jointly own the Grasberg mine, which has one of the world’s largest reserves of gold and copper (Freeport-McMoRan, 2021; AP, 21 December 2018). The mine site has been a hotspot of violence and conflicts of interest since the company launched its operations in 1973 (HumanRightsPapua, 19 October 2021). The separatist West Papua National Liberation Army (TPNPB) has cited resource extraction by non-Papuans as a core reason for their violent activities in the region (Reuters, 3 April 2018). The rebels have previously declared their intention to “destroy” Freeport and demand that the company cease mining operations in Papua (Reuters, 3 April 2018). ACLED records at least nine violent events at the Grasberg mine site since the beginning of ACLED coverage in 2015.

North Korea tested a new type of SLBM on 19 October. Analysts argue that this latest test by North Korea could be interpreted as a response to a similar missile test carried out by South Korea in September (38North, 22 October 2021). The launch comes amid the arrival of the US envoy for North Korea to the region (BBC, 19 October 2021). The latest missile launch prompted a closed-door UN Security Council emergency meeting (France 24, 21 October 2021). This marks the second time in October that the UN Security Council has staged an emergency meeting to discuss North Korean missile tests, which are banned under UN sanctions.

In South Korea, workers affiliated with KCTU, one of the largest labor unions in the country, held nationwide demonstrations as part of a one-day general strike against unfair labor practices in the country. During demonstrations, workers raised a number of concerns, including discrimination against irregular workers and small businesses, and demand better working conditions. The government had previously requested the union to cancel the rally, citing COVID-19 restrictions (NEWSIS, 23 October 2021). Despite the government’s criticism, the union announced plans for another walkout on 13 November, further escalating tensions with state authorities (NEWSIS, 23 October 2021).

Lastly, in Taiwan, a recall vote for the Taichung City legislator of the pro-independence Taiwan Statebuilding Party (TSP) on 23 October prompted a series of rallies last week. The recall was initiated by a voter who gathered enough signatures and got approval from the Central Election Commission to propose the recall. He accuses the TSP legislator of “behaving outrageously” in parliament and supporting the ruling Democratic Progressive Party’s (DPP) lifting of a ban on the import of pork containing ractopamine from the US (Taiwan Focus, 23 October 2021). Supporters of the legislator and members of the DPP, a close ally of the TSP, rallied to defend the legislator’s term in office. On the other side, members of the main opposition party, the Kuomintang (KMT), rallied for the removal of the legislator from office. The recall vote is the latest in a string of recall referendums launched by either the DPP or KMT, raising concerns that such referendums are being misused for political goals rather than for removing officials who fail to perform their duties (The Diplomat, 20 July 2021).