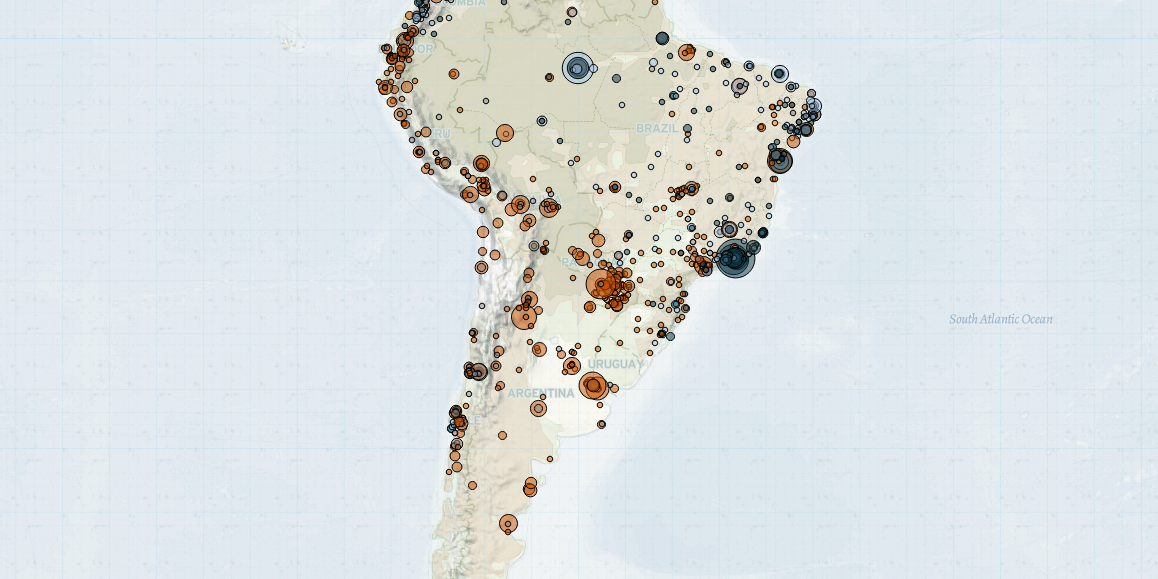 Last week in South America, armed clashes slightly decreased across the region, while demonstrations increased compared to the week prior, especially as the economic situations in several countries continue to motivate people to take to the streets. Colombian state forces arrested the main leader of the Gulf Clan in Antioquia department, while small-scale miners took to the streets calling for an end to state operations against mining in Chocó department. In Brazil, territorial disputes led to fighting between drug trafficking gangs in Salvador municipality, while police militias and gangs continue to clash in the metropolitan area of Rio de Janeiro. In Venezuela, students and teachers gathered in anti-government demonstrations against the appointment of a new minister of university education. In Argentina, protesters called for a decrease in the price of basic goods and more job opportunities. Finally, in Ecuador, Indigenous and labor organizations led nationwide demonstrations against a hike in fuel prices.

In Colombia, military and police forces arrested the main commander of the Gulf Clan and “most wanted” criminal in the country, Dario Antonio Úsuga (alias: Otoniel) during an operation in Necoclí municipality, Antioquia department, close to the border with Panama (BBC, 24 October 2021). The operation leading to his arrest lasted several days, and one police officer was killed during fighting. The Gulf Clan, also known as the Urabeños or the Gaitanist Self-Defense Forces of Colombia, is a neo-paramilitary group that is now considered to be the dominant drug trafficking group in Colombia (InSight Crime, 24 October 2021). Although President Iván Duque welcomed the arrest as a successful step in curbing insecurity and crime, analysts and local organizations have expressed their view that little will change if the government does not tackle more critical issues, such as the financing of armed groups (DW, 26 October 2021). The Colombian government announced it will extradite Otoniel to the US, where he faces several charges, including the importation of cocaine into the US (BBC, 25 October 2021).

Meanwhile, local miners, Indigenous groups, and Black communities took to the streets across several cities in Chocó department, amid a strike calling for the suspension of state operations against mining. The government claims that the operations are carried out to destroy machinery used for illegal mining, which often finances insurgent and criminal groups (National Police of Colombia, 21 July 2020). However, protesters claim the actions are specifically harming the subsistence of local workers who engage in traditional and artisanal mining (El Espectador, 26 October 2021). Protesters call for the regulation of small-scale extraction of mineral resources to allow artisanal miners to work legally. The demonstrations caused a shortage of supplies in the department, as protesters blocked several highways ((El Espectador, 26 October 2021).

In Brazil, the number of armed clashes between organized criminal groups continued at similar levels last week compared to the week prior. Two people, including a civilian, were killed as rival gangs and state forces clashed in Salvador city, Bahia state. In September 2021, the local gang Bonde do Ajeita joined forces with the leading and nationally present Red Command, prompting clashes with rival gangs over territorial control in Bahia (Bahia 190, 27 September 2021; G1, 27 October 2021). Civilians also continue to be affected by fighting between armed groups in Rio de Janeiro state, where a one-year-old boy was shot and killed in Mesquita city during a shoot-out between a drug trafficking group and a police militia group. Two other men were also killed during the shoot-out. The child is the fifth child killed by gun violence this year in Rio de Janeiro city and the surrounding metropolitan region (UOL, 26 October 2021).

In Venezuela, students and teachers gathered in the cities of Caracas and Mérida to protest against the appointment of Tibisay Lucena as the new minister of university education. Protesters claim the appointment comes as an attempt to centralize oversight of the country’s university system, and will potentially allow for a crackdown on anti-regime rhetoric on school campuses. Lucena, who for twelve years served as the Director of the National Election Council, is seen as a loyalist of the regime of Nicolás Maduro (El Pais, 25 October 2021). In 2018, Lucena certified the highly disputed election results that led to the declaration of a parallel government by opposition leader Juan Guaidó in 2019 (El Pais, 25 October 2021).

Meanwhile, the number of demonstration events increased last week in South America compared to the week prior, as the economic situations in several countries, such as Argentina and Ecuador, continue to motivate people to take to the streets. ACLED records demonstrations either in demand of job opportunities or against fuel price hikes in almost all South American countries last week.

In Argentina, members of civil society organizations and left-wing groups organized several marches last week in at least six provinces and in the capital, Buenos Aires. Protesters demand a decrease in the price of basic goods and more job opportunities. Protesters also voiced support for the government’s decision to freeze the price of more than 1,400 food and mass consumption products for 90 days from 20 October, in order to curb inflation (DW, 20 October 2021).

Meanwhile, in Ecuador, Indigenous and labor organizations led nationwide demonstrations last week against a hike in fuel prices. Thousands of people took to the streets across the country to demand a lower fuel price and exemptions for sectors adversely affected by the coronavirus pandemic (DW, 27 October 2021). Clashes between demonstrators and state forces were reported in Guayas, Cotopaxi, Pichincha, and Santo Domingo de los Tsachilas provinces. The demonstrations came after President Guillermo Lasso’s announcement of a freeze in the monthly increase of fuel prices on 22 October (Al Jazeera, 26 October 2021). The freeze left the fuel prices at a slightly higher than expected level, prompting the Ecuador’s Workers United Front (FUT) and the Confederation of Indigenous Nationalities of Ecuador (CONAIE) to call for demonstrations against what they claim is a conservative economic measure (El Tiempo, 26 October 2021). The nationwide demonstrations — carried out on 26 and 27 October — are the largest anti-government demonstrations since Lasso took office in May 2021 (Al Jazeera, 27 October 2021). Lasso faces increasing political opposition against his security and economic policies, particularly since his declaration of a 60-day state of emergency on 18 October, following a rise in drug-related violence in Ecuador’s prisons (France24, 21 October 2021; BBC, 19 October 2021).