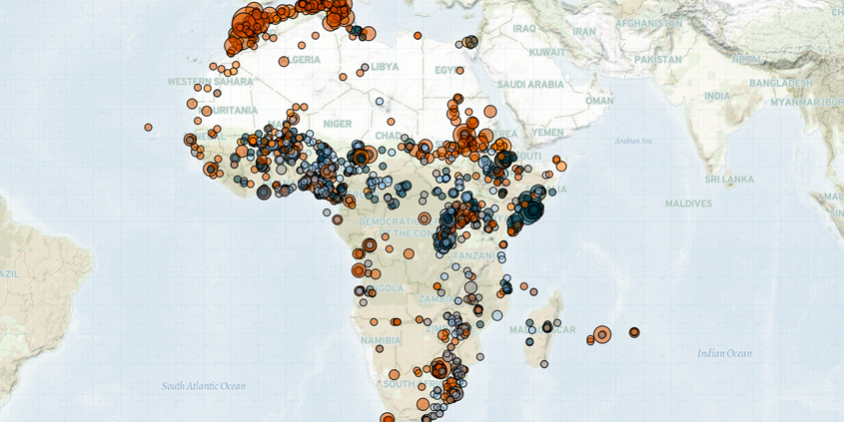 Last week in Africa, two groups of Islamist militants engaged in deadly clashes in Mali; mass demonstrations against the military coup continued for a second week in Sudan; inter-communal clashes erupted in South Sudan and Kenya; and tensions escalated between Algeria and Morocco.

In Burkina Faso, Islamist militants carried out numerous attacks against civilian and military targets. Jama’at Nusrat al-Islam wal-Muslimin (JNIM) and affiliates launched a series of attacks against villages in the North region where the Burkinabe forces targeted militant positions with airstrikes. JNIM militants also attacked the police and forest guard stations in the town of Di in the Boucle du Mouhoun region, killing five policemen and suffering casualties. Elsewhere in Sahel, Islamic State West Africa (ISWAP) Greater Sahara faction fighters carried out a deadly attack against Burkinabe and Nigerien travelers between Dambam and Markoye. Overall, around 45 militants were reported killed last week as a result of military operations and in response to attacks across different regions in Burkina Faso.

In Niger, two large-scale attacks by suspected ISWAP Greater Sahara faction militants were reported in the Tillaberi region. The first attack targeted the convoy of a self-defense militia from Banibangou. Dozens of militiamen as well as the Banibangou mayor were killed in the attack. The second attack was launched against Nigerien state forces in the village of Dagne, with over a dozen soldiers killed and several wounded and missing.

In Nigeria, military forces conducted two major operations against Islamist militants in Borno state. An airstrike in the Sambisa Forest Reserve area targeted a gathering of militants and left dozens dead and injured. Additionally, a shelling in Bama Local Government Area (LGA) targeted the militants’ gun trucks. Militia violence in the northwest region continued, particularly in Kaduna state where the militias carried out several deadly attacks against civilians, resulting in a 215% spike in violence in the state last week relative to the month prior (see ACLED’s Early Warning Research Hub for more). In response, Nigerian forces carried out a combined air-ground operation in the Chikun LGA, killing dozens of militiamen.

In the Central African Republic, clashes between militias under the Coalition of Patriots for Change (CPC) and military forces continued in Nana-Mambere and Ouham-Pende prefectures. Elsewhere in Bangui, presidential guards attacked unarmed Egyptian UN peacekeepers (MINUSCA) for taking photographs of the president’s house, wounding 10.

In the Democratic Republic of Congo, the Congolese government extended the ‘State of Siege’ operation for the eleventh time. Meanwhile, violence persisted in North-Kivu and Ituri provinces, particularly by the Allied Democratic Forces (ADF) and the Cooperative for the Development of Congo (CODECO). In Ituri, ADF and CODECO militants launched multi-day attacks against civilians in several localities in Mambasa and Djugu territories respectively, leaving several fatalities. The FARDC also clashed against the Mayi Mayi Barcelone in Beni territory, killing one of the group’s leaders and four others. In South-Kivu province, the FARDC fought against an unidentified Hutu ethnic militia operating in the territories of Kabare and Kalehe and captured several militants. Further, a Mayi Mayi group called the ‘Coalition of Congolese Patriots for the Application of Article 64 – CPCA/A64’ attacked several positions of the Congolese armed and police forces in the city of Bukavu, resulting in at least 11 fatalities. In neighboring Burundi, several remains of civilians killed were discovered along the border with the DRC in the Buganda and Gitobe communes of Cibitoke province, resulting in a 320% spike in violence in the province last week relative to the month prior (see ACLED’s Early Warning Research Hub for more). Tens of bodies have been found in these communes this year, suspectedly revealing clashes within the area of Kibira forest.

Mass demonstrations against the military coup took place across many cities and towns in Sudan on 30 October, with security forces killing three demonstrators and wounding dozens in the Greater Khartoum area. Attacks by security forces were also reported in the eastern towns of Kassala, Gedaref, and Singa, as well as in Nyala in South Darfur state, though no fatalities were reported in these locations.

Levels of violence surged in South Sudan following a marked decline in events over the past month. Heavy fighting involving Rek Dinka and Luach-Jang Dinka sections broke out in parts of Tonj East county of Warrap state, leaving several people killed and wounded. The fighting follows serious clashes in early October involving the same groups. Intersectional clashes also broke out between the Mor clan of the Lou Nuer in Akobo county of Jonglei state, resulting in a 200% spike in violence in the state last week relative to the month prior (see ACLED’s Early Warning Research Hub for more). Finally, an increase in targeted attacks and raids was reported in Eastern Equatoria state.

In Uganda, military forces engaged in lethal clashes with pastoralist militia from South Sudan as well as Karamajong armed pastoralists in the Northern region. In neighboring Kenya, Turkana pastoralist militiamen raided a village in Samburu North sub-county, looting cattle. The Samburu militia responded and clashes ensued during which over a dozen were killed.

In South Africa, municipal elections were held amid reports of looting and destruction at voting stations, particularly in the KwaZulu-Natal province. The ruling African National Congress (ANC) party, in power since the end of apartheid, received less than 50% of the votes for the first time in the past two decades (Al Jazeera, 4 November 2021).

Lastly, tensions escalated between Algeria and Morocco after three Algerian truck drivers  were killed in an explosion near Bir Lehlou in the contested Western Sahara territory. While the Algerian government claims they were killed in a drone strike by Moroccan forces, Moroccan sources claim the trucks were destroyed in a minefield.