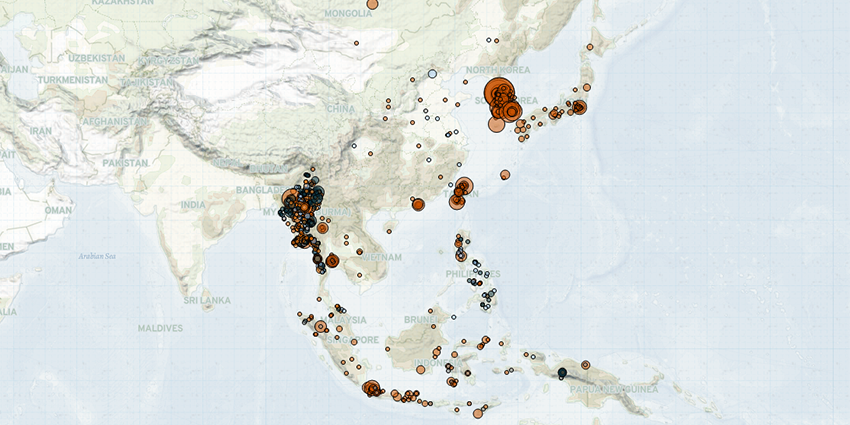 Last week in East and Southeast Asia, military offensives continued in northwestern Myanmar in a bid to quell local defense forces. In Rakhine state, the military clashed with the United League of Arakan/Arakan Army (ULA/AA) for the first time in over a year. Meanwhile, the National Unity Government (NUG) claimed that People’s Defense Force (PDF) troops under its direct command launched their first attack last week. In Indonesia, fighting between the separatist West Papua National Liberation Army (TPNPB) and state forces continued in Intan Jaya regency, Papua province. In Malaysia, people took to the streets to protest against the death sentence of a Malaysian man convicted of drug trafficking in Singapore. In Thailand, anti-government protests were triggered last week by a court ruling against protest leaders. Lastly, in the Philippines, the government appointed a new chief of the Philippine National Police and announced enhanced efforts against illegal drug operations.

In northwestern Myanmar, the military continued its offensive in the resistance strongholds of Chin state and Sagaing region last week, having increased troop deployments in the two areas since October (Reuters, 8 October 2021). An increased number of airstrike events by the military were reported in Sagaing region, which local media has linked to reports of a new military offensive, ‘Operation Anawrahta,’ aimed at stamping out local defense groups in northwestern Myanmar (Myanmar Now, 11 November 2021). Meanwhile, resistance forces continued their ground attacks on military troops. On 10 November, the Chinland Defense Force (CDF) launched a series of ambushes on a military convoy traveling along the Matupi-Mindat road in Chin state. In Sagaing region, local defense groups attacked military columns with remote-controlled explosives in Kawlin, Kyunhla, and Pale townships.

Elsewhere, in northern Rakhine state, fighting broke out between the military and the ULA/AA in Maungdaw township last week, for the first time in more than a year. ACLED last recorded a clash between the military and the ULA/AA in November 2020. Clashes erupted after military troops entered ULA/AA territories while conducting clearance operations. Local sources have claimed that the military has sent reinforcements to the area and that police outposts are armed with artillery (Myanmar Now, 11 November 2021).

In Yangon region, the NUG’s PDF and other local defense groups jointly launched an attack last week on a military truck carrying 25 soldiers in Kungyangon township. A NUG source claimed that the attack was the first by PDF troops under the direct control of the NUG. Following the attack, an NUG Yangon Regional Command source claimed that more attacks are planned in the region (Myanmar Now, 8 November 2021). The attack comes after the NUG announced the establishment of a central committee to coordinate operations with allied ethnic armed organizations and largely self-organized local defense groups last month (Irrawaddy, 29 October 2021; Myanmar Now, 28 October 2021).

In Indonesia, armed clashes between the separatist TPNPB and state forces continue to be reported in Intan Jaya regency, Papua province. Last week, a Papuan civilian was injured in crossfire between the rebels and state forces in Mamba village. She was hospitalized after sustaining bullet injuries (Human Rights Papua, 10 November 2021). The rebels have stated that their recent armed operations in Intan Jaya regency have been in reaction to the Indonesian government’s planned exploitation of the Wabu Block gold mining site (Suara Papua, 8 November 2021). The TPNPB opposes the plan claiming that the government is trying to steal natural resources from the Papuan community (Suara Papua, 8 November 2021).

Meanwhile, an Indonesian nationalist group calling itself the Homeland ­Defenders Militant Troops threw a firecracker at a residence belonging to the family of the prominent human rights lawyer, Veronica Koman in Jakarta last week. Koman is known for voicing her support for Papuan independence (Tribunnews, 9 November 2021). There were no casualties or significant property damage. Following the attack, a threatening note was found in the garage of the residence, while a similar letter was delivered to another relative in a parcel containing a dead chicken (Tribunnews, 9 November 2021). Koman has been living in exile since being charged with provoking unrest over social media posts reporting police violence during the 2019 Papuan protests (The Guardian, 8 November 2021).

In Malaysia, people gathered outside the Singapore High Commission in Kuala Lumpur last week to oppose the death sentence of a Malaysian national in Singapore. The man, who likely has an intellectual disability, was convicted of drug trafficking in 2011 and was scheduled to be hanged on 10 November (Al Jazeera, 12 November 2021). A day before the planned execution date, the Singaporean court decided to postpone his execution as the man had contracted COVID-19. A large majority of executions recorded over the last eight years in Singapore have been carried out for drug trafficking (Al Jazeera, 12 November 2021).

In Thailand, anti-government protests continued last week, after the Constitutional Court ruled on 10 November that three protest leaders had attempted to overthrow the monarchy. Pro-democracy demonstrators staged several protests against the court’s verdict and asked for monarchy reformation.

Lastly, in the Philippines, President Rodrigo Duterte appointed Dionardo Carlos as the new chief of the Philippine National Police last week (CNN Philippines, 10 November 2021). Carlos vowed to “implement even more strongly” the government’s controversial anti-drug campaign as the Duterte administration approaches the end of its mandate in June 2022 (Manila Bulletin, 12 November 2021). The Duterte administration’s war on drugs has been a defining feature of its years in power. Official government data counts 6,201 drug suspects who were killed in police operations under the war on drugs as of 30 September 2021 (PDEA, October 2021). However, new ACLED data puts civilian deaths from anti-drug operations at 7,742 — at least 25% higher than official figures suggest (for more, see ACLED’s new report: The Drug War Rages on in the Philippines). Additionally, the report finds that epicenter of the drug war has shifted from Metro Manila to Central Luzon, with further geographic expansions therein. The violence in Central Luzon continues, with ACLED’s Early Warning Research Hub flagging a 100% increase in violence in the region last week relative to the month prior.