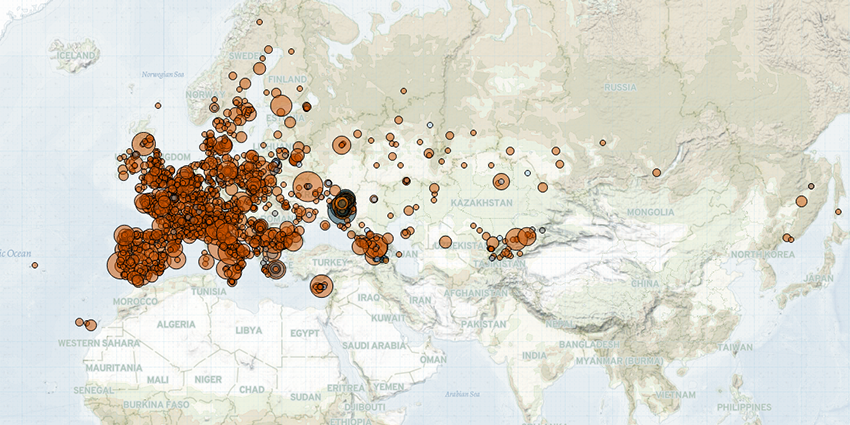 Last week, in Europe, Central Asia, and the Caucasus, the migrant crisis along the EU-Belarus border continued. In Northern Ireland, suspected sectarian property destruction was reported amid growing tensions around the Northern Ireland Protocol. Demonstrations calling for climate action continued across the region during the second and final week of the 2021 United Nations Climate Change Conference (COP26) in Glasgow. In Poland, demonstrations in support of reproductive rights took place across the country.

Along the Belarus-EU border, the migrant crisis continued last week. In particular, a group of around 2,000 migrants, mostly from Syria, Iraq, and Afghanistan, were escorted by Belarusian border guards and police to the Bruzgi border checkpoint on 8 November (Nasha Niva, 8 November 2021). Several groups attempted to cross the Belarusian-Polish border by destroying parts of the fence near the checkpoint, pelting stones at Polish soldiers, and forcing their way with sticks and tools (RFE/RL, 11 November 2021). The latest violence along the border comes amid accusations of human rights abuses by both Belarusian and Polish forces, including violence against migrants and denying migrants access to asylum procedures (CNN, 11 November 2021; ReliefWeb, 12 November 2021). However, conflicting claims of abuse have been difficult to verify given the lack of access given to journalists and human rights organizations, including aid workers (CNN, 10 November 2021).  Both the Belarusian and the Polish governments have amassed thousands of troops and equipment along the border. Belarus conducted exercises with Russian forces near the border, including those with Russia’s strategic bombers (AP, 12 November 2021; Nasha Niva, 6 November 2021).

Elsewhere along the Belarus-EU border, in Lithuania, demonstrations by asylum seekers detained in camps and other facilities took place on 8 November (Lrytas, 8 November 2021). Lithuania declared a state of emergency on 10 November along its border with Belarus, as well as in facilities housing asylum seekers (Delfi, 9 November 2021). Opponents of Lithuania’s migration policy of denying entry to irregular migrants demonstrated in Vilnius, demanding that the government be more open to accepting refugees in Lithuania (LRT, 7 November 2021). Meanwhile, several states, including Germany and the US, condemned the Belarusian regime of Alexander Lukashenko for his weaponization of migrants (RFE/RL, 11 November 2021). According to the Estonian government, Lukashenko demands that the EU recognize him as president of Belarus and end sanctions for his human rights abuses as prerequisites to ending his use of migrants to pressure the EU (ERR, 17 November 2021).

In Northern Ireland, tensions are rising with two incidents of suspected sectarian property destruction reported last week. A car in front of the Ulster Rangers Supporters Club in Belfast, whose support base is predominantly Protestant, was lit on fire (Belfast Live, 5 November 2021). Meanwhile, a bus was hijacked in Newtonabbey, and later lit on fire (Belfast Live, 8 November 2021). The identities of the perpetrators are unknown, but they coincide with rising tensions around the disputed Northern Ireland Protocol. The protocol currently maintains an open land border between Ireland and Northern Ireland, with checks for goods taking place between the ports of Northern Ireland and Great Britain instead (BBC News, 8 November 2021). UK Prime Minister Boris Johnson has recently flagged changes to the protocol that could potentially threaten the Good Friday Agreement, which has largely stabilized the region over the past two decades (BBC News, 8 November 2021).

In Russia, the prosecutor-general’s office filed a lawsuit with the Russian Supreme Court last week, demanding the disbanding of Memorial, one of Russia’s oldest and most renowned human rights defense organizations. The organization, which was declared a foreign agent in 2014, focuses heavily on identifying victims of the Soviet regime, though also covers modern human rights issues in Russia (RFE/RL, 15 November 2021). On 18 October, unidentified individuals rioted and stormed the organization’s headquarters in response to Memorial’s showing of a film about the Holodomor in Ukraine (Novaya Gazeta, 15 October 2021). Authorities accuse Memorial of failing to insert disclaimers in some of its publications specifying that the organization is legally designated as a ‘foreign agent’ in Russia, a legal obligation for ‘foreign agents’ under Russian law (Caucasian Knot, 11 November 2021). This action is one of the latest in an ongoing Russian government campaign against independent media, human rights organizations, government critics, and those who challenge its version of history (Medusa, 23 April 2021; Open Democracy, 30 September 2021).

In the United Kingdom1A car explosion took place in Liverpool on 14 November. This will be included in next week’s Regional Overview, which will cover the period 13-19 November., tens of thousands of global climate campaigners participated in mass demonstrations last week during the second and final week of the COP26 summit in Glasgow, demanding worldwide efforts to achieve climate justice, as well as migrant and racial justice (BBC News, 13 November 2021; Scotsman, 12 November 2021). Overall, the demonstrations around COP26 remained almost entirely peaceful, with only one violent demonstration and around 70 arrests reported (BBC News, 13 November 2021). Despite their decision to avoid the use of riot gear, there were criticisms from demonstrators of some of the tactics used by Scottish police, such as cordoning off sections of demonstrators for hours that also trapped pedestrians, and deploying up to 10,000 police officers at demonstration sites (BBC News, 13 November 2021). In the Netherlands, Estonia, and Portugal, general demonstrations demanding more action against climate change were held, and in France, Croatia, Cyprus, Denmark, Switzerland, Finland, Lithuania, Poland, Sweden, and Ireland, demonstrators gathered in many locations to denounce global warming and the inaction of governments in direct relation to COP26.

In Poland, demonstrations in support of reproductive rights continued in several cities, including in Gdansk and Wroclaw, last week following the recent death of a woman caused by a risky pregnancy. Activists claim that the hospital refused to perform an abortion, following the newly imposed law restricting abortions, which led to her death (Politico, 7 November 2021). Separately, the yearly Independence March, an annual event celebrating Poland’s independence, took place in Warsaw and a few other cities on 11 November. Several groups of activists gathered across the route, demonstrating against the alleged homophobia and racism represented by the march (The Guardian, 11 November 2021). In the city of Kalisz, nationalist activists chanted anti-Semitic slogans and burned Jewish symbols, prompting public backlash [Times of Israel, 13 November 2021).

In Armenia and Azerbaijan, demonstrations and celebrations were held to commemorate the anniversary of the end of the Nagorno-Karabakh War on 9 November. In Armenia, multiple political parties and groups organized demonstrations against both the signed agreement to end the war and the government of Prime Minister Pashinyan, blaming him for defeat in the war. Meanwhile, along the Armenia-Artsakh-Azerbaijan Line of Contact, several ceasefire violations were reported during the last week. One Armenian civilian died as a result of a ceasefire violation and three others were wounded.

In the Donbas region of Ukraine, fighting between Ukrainian government forces and Russian-led forces slightly increased last week compared to the previous week. There were 78 armed clashes, 138 shelling incidents, and five fatalities reported.