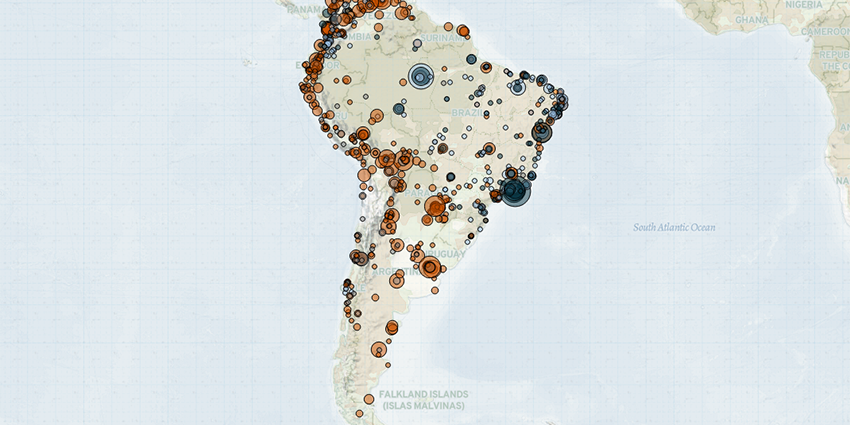 Last week in South America, organized political violence levels decreased compared to the week prior, while the number of armed clashes remained at similar levels. In Colombia, clashes between the Gulf Clan and state forces were reported in Antioquia and Chocó departments. In Brazil, territorial disputes led to intense fighting between police militias in Rio de Janeiro city, while drug trafficking groups clashed in Salvador city, Bahia state. Meanwhile, demonstration events increased in South America last week compared to the week prior, driven by demonstrations in Bolivia against government legislation regulating the illicit movement of money. In Peru, the first 100 days of President Pedro Castillo in power were marked by protests in favor and against his government.

In Colombia, Gulf Clan activity increased last week, despite overall violence remaining at similar levels compared to the week prior. In Antioquia department, suspected Gulf Clan members ambushed a military unit in Santa Lucia municipality, killing four soldiers. Two clashes between Gulf Clan members and state forces were also reported in Bahia Solano municipality, Chocó department, resulting in the deaths of two police officers and one Gulf Clan member. Meanwhile, one civilian woman died in Valdivia municipality, Antioquia, after members of the Gulf Clan set off an explosive device on a freeway. The Gulf Clan controls the production and transportation of drug trafficking in the north of Antioquia department, Chocó, and Córdoba (INDEPAZ, 26 October 2021). While its leader Dario Antonio Úsuga (alias: Otoniel) was arrested on 24 October, analysts expect the organization of more than 1,700 rebels to continue its operations unimpeded (BBC, 24 October 2021; La Opinion, 24 January 2021).

In Brazil, violence decreased overall last week compared to the week prior. Nevertheless, fighting between police militias over territorial control intensified in Rio de Janeiro city. On 6 November, the Tandera Militia clashed with the Zinho Militia in Santa Cruz and Paciencia neighborhoods and in Manguariba region over the control of illicit businesses. Local sources claim more than 150 combatants of the Zinho Militia were involved in the clash, although the number has not been confirmed and casualties remain unknown (Informe Agora, 6 November 2021). The two groups have been disputing influence in the West Zone of the city since the killing of the leader of the largest Rio militia, the Bonde do Ecko, on 13 June, during a civil police operation.

In Amapá state, military operations to curb drug trafficking resulted in at least two shootouts with local gangs last week, with two gang members killed in Macapá city. A man and an adolescent were also killed by drug traffickers in the context of territorial disputes between gangs. This contributed to a 100% spike in violence in the state last week relative to the month prior (see ACLED’s Early Warning Research Hub for more).

Elsewhere in Brazil, clashes involving rival drug trafficking groups, as well as state forces, continued last week in Salvador city, Bahia state, with at least six reported fatalities. The violence comes as new local gangs, such as the Bonde da Gamboa and the Bonde do Zeca, fight for territorial control against larger groups, such as the Red Command (CV) and the Bonde do Maluco, from which the two smaller groups originated (Correio 24 Horas, 4 January 2018).

In Bolivia, labor unions and organizations opposed to the government resumed demonstrations against legislation regulating the illicit movement of money last week, after a four-week respite. The groups demand the annulment of the Law against Illicit Earnings and the Financing of Terrorism (Law 1386), which the government claims would regulate the movement of money to comply with international standards against illicit enrichment (France24, 12 October 2021). However, workers claim that the law gives the government excessive and discretionary power through the introduction of regulatory powers to investigate and charge suspicious flows of money (BBC, 11 November 2021). Last week, demonstrations were reported for several days in a row in almost all departments of the country. There were reports of clashes between demonstrators and governing left-wing Movement for Socialism-Political Instrument for the Sovereignty of the Peoples (MAS-IPSP) supporters in several cities. Several people were reportedly injured during the demonstrations and hundreds of demonstrators have been detained across the country (BBC, 11 November 2021). One government supporter also reportedly died after choking on chewed coca leaf while running away from police (La Patria en Linea, 10 November 2021). The lower house of congress approved the annulment of Law 1386 on 15 November, with approval granted by the upper house on 16 November (La Razón. 16 November 2021).

Finally, in Peru, the first 100 days of left-wing President Castillo in power were marked with protests in favor and against his government on 11 November (France24, 11 November 2021). In Lima city, members of right-wing organizations called for the removal of Castillo from power, as protesters in the Cusco and Arequipa regions demonstrated against the increase in food and fuel prices. A protest in support of the government was reported in Arequipa city.