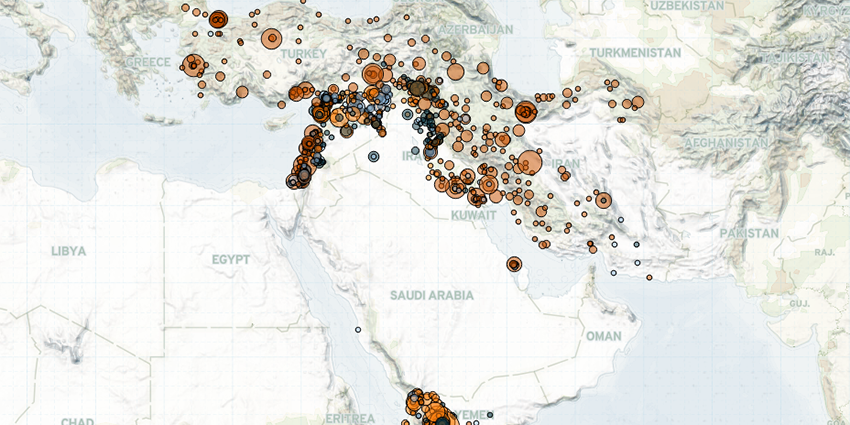 In Yemen, clashes between Houthi and National Resistance forces intensified in Hodeidah governorate last week, contributing to the second most violent week of 2021 in the governorate. After their peaceful takeover of numerous locations following the withdrawal of Saudi-led coalition-backed forces the week prior, Houthi forces initiated clashes in At Tuhayat and Hays districts. They took over several coastal areas in At Tuhayat, reaching the outskirts of Al Khawkhah district. On the other hand, in Hays, National Resistance forces gained territory around Hays city and along the border with neighboring Taizz governorate. These clashes were accompanied by a significant increase in Saudi-led coalition airstrikes.

In Al Bayda governorate, Al Qaeda in the Arabian Peninsula (AQAP) staged two attacks last week, amid a recent resurgence in AQAP activity in the governorate. In November 2021 thus far, ACLED records the largest number of AQAP events in Al Bayda since November 2020 (for more on AQAP activity in Yemen, see this ACLED piece on the wartime transformation of the organization). Confirming this resurgence, suspected US drone strikes struck vehicles carrying alleged AQAP members last week. If confirmed, this would represent the first US strike in Yemen this year, and the first in Al Bayda governorate since January 2020. These events contributed to a 200% spike in violence in Al Bayda governorate last week relative to the past month (see ACLED’s Early Warning Research Hub for more).

In Marib governorate, clashes between Houthi and pro-Hadi forces continued along the frontlines west and south of Marib city last week. Despite sustained fighting, neither side made territorial advancements last week for the first time in more than two months. Houthi forces have been unable to move beyond the Balaq mountain range south of the city, as pro-Hadi reinforcements arrived from the Saudi border last week (Khabar New Agency, 16 November 2021) and Saudi-led coalition airstrikes on Houthi forces continue. Meanwhile, Houthi forces targeted a telecommunications tower with a bomb-laden drone in Marib district, causing an interruption of Sabafon company coverage in Marib for the second time this month.

Meanwhile, an increase in Saudi-led coalition airstrikes on Sanaa city and Sanaa governorate led to a 300% spike in violence last week relative to the past month in Sanaa governorate (see ACLED’s Early Warning Research Hub for more). It was also the second consecutive week that the Saudi-led coalition targeted Sanaa city — the first time this has happened since April 2021. These strikes usually come as a response to Houthi drone and missile attacks on Saudi Arabia. Last week, Saudi forces intercepted several attacks, including one on Abha airport.

In northwest Syria, the YPG shelled Afrin city in Aleppo countryside last week, killing three displaced people and injuring 13 others. The shelling coincided with shelling activity by Turkish forces and opposition rebels on YPG-held areas in the countryside. Meanwhile, clashes took place between regime forces and opposition rebels on existing fronts in western Aleppo, with no advances reported.

In Iraq, unknown militants launched multiple unsuccessful attempts to shell the Bashiqa base of the Turkish army in Ninewa last week. On 16 November, militant rockets overshot the base and landed in agricultural lands. A few days later, another attempt failed after a launcher-platform accidentally exploded before a strike was conducted. Iraqi security forces foiled a further planned attack when they discovered and dismantled a platform (Rudaw, 19 November 2021).

Last week in Palestine, a shootout between local Palestinians and Israeli military forces led to the death of a Palestinian Islamic Jihad (PIJ) fighter. Clashes erupted after Israeli forces carried out an arrest raid in Tubas city and Palestinians responded by hurling rocks and Molotov cocktails at soldiers. The raid was carried out as part of an intensification of Israeli raids and arrests in the West Bank in recent weeks (Al Jazeera, 16 November 2021). Meanwhile, Israeli police shot and killed a Palestinian youth after he carried out a stabbing attack against Israeli police officers in the Old City of East Jerusalem. Two police officers were injured in the attack that took place near a Jewish religion school affiliated with the Ateret Cohanim settler organization in the Muslim quarter (France24, 17 November 2021).