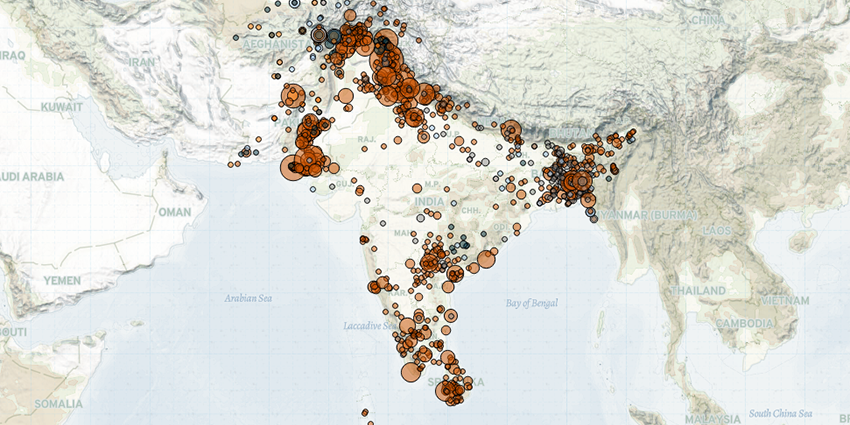 Last week in South Asia and Afghanistan, the Islamic State (IS) continued to target civilians and the Taliban in Afghanistan, as the Taliban increased operations against IS hideouts. In India, security forces and Maoist rebels engaged in deadly clashes in Maharashtra and Chhattisgarh, as separatist militants resurfaced in the northeast. Meanwhile, farmer unions and demonstrators continued to mobilize, despite the Indian government announcing a roll back of three contentious farm laws. Lastly, in Pakistan, remote violence against security forces and tribal officials in the northwest increased, despite an ongoing ceasefire agreement between the state and Tehreek-i-Taliban Pakistan (TTP) militants.

In Afghanistan, IS conducted six remote explosive attacks in Kabul city last week, targeting both civilians and Taliban forces. In Kabul’s Dasht-e-Barchi neighborhood, an area populated mostly by the Hazara community (Al Jazeera, 13 June 2021), at least two Hazaras were killed and several wounded in two explosive attacks targeting passenger vehicles. IS also detonated two IEDs near Taliban checkpoints in Kabul city. In Jalalabad city, IS militants killed a Taliban member in a gunfire exchange. In response to heightened IS activity, the Taliban conducted operations targeting IS hideouts in Kabul and Kandahar provinces, killing at least six IS members.

Despite previous Taliban statements underplaying IS presence in Afghanistan, the UN envoy to Afghanistan claimed last week that IS has been active in all provinces of the country (Reuters, 17 November 2021). The envoy also criticized extrajudicial detentions and the killing of suspected IS members by the Taliban. Since early October 2021, the Taliban have killed several people with alleged links to IS, mainly in Nangarhar province. Similarly, several people with alleged links to IS have also been killed by unknown perpetrators since then, sometimes with a note left behind about their IS links (Pajhwok Afghan News, 13 October 2021).

In India, police forces killed at least 27 Maoist militants, including a committee leader, during an ambush and exchange of fire in a forest in Maharashtra state last week. This is the second deadliest Maoist encounter thus far in 2021, following a clash on 3 April when 31 Maoist rebels and security forces were killed in Chhattisgarh state. A few days after the clash, security forces exchanged fire with the Maoist People’s Liberation Guerrilla Army (PLGA) during another operation in neighboring Narayanpur district in Chhattisgarh, killing a PLGA commander. The operations come amid increasing Maoist attacks on civilians in the past few weeks. Maoists operate in mineral-rich areas in central India known as the ‘Red Corridor,’ an area of operation that has contracted in recent years due to police operations and lack of resources (for more on Maoist violence, see this ACLED analysis on Naxal-Maoist Insurgency Trends).

Elsewhere in India, militant separatist groups resurfaced in the northeast last week, targeting security forces and civilians. At least seven people, including security officers, were killed in an IED attack on a convoy of a paramilitary force Assam Rifles in Manipur state. The People’s Liberation Army (PLA) and the Manipur Naga People’s Front (MNPF) insurgents, who demand a separate independent state of Manipur, claimed joint responsibility for the attack (Deccan Herald, 13 November 2021). Both groups have been dormant for the past few years. In Arunachal Pradesh state, the National Socialist Council of Nagaland-Khaplang (NSCN-K-YA) abducted and killed a village chief and another civilian. This led to a clash with Assam Rifles, during which three rebels were killed. There have been no reports of violence involving NSCN-K-YA, a Naga nationalist separatist group, since July 2021, when two of its members were killed during a clash with security forces.

Lastly in India, Prime Minister Narendra Modi announced last week that he would repeal contentious agriculture laws that sparked nationwide farmer demonstrations for more than a year (CNN, 19 November 2021). Despite the announcement, thousands of farmers have continued peaceful protests across India until the repeal is finalized in parliament (Deutsche Welle, 22 November 2021). The decision comes ahead of elections in the key agricultural states of Uttar Pradesh and Punjab in February and March 2022. The move has been seen as Prime Minister Modi and his Bharatiya Janata Party’s (BJP) efforts to garner support to retain their government in Uttar Pradesh and win against the incumbent Indian National Congress government in Punjab (Deutsche Welle, 22 November 2021). The laws enabling the deregulation of the agricultural market have sparked over 4,000 nationwide demonstration events since September 2020, mainly led by Indian farmers expressing concern for their livelihoods (CNN, 6 March 2021).

In Pakistan, remote violence increased in Khyber Pakhtunkhwa province last week, despite an ongoing month-long ceasefire between the Pakistani government and TTP. Two police officers were killed when an IED exploded during routine patrolling in the Bajaur tribal district of Khyber Pakhtunkhwa, while a Pakistani soldier died during another IED explosion in Swabi city. Meanwhile, a grenade attack wounded seven people at a gathering of local tribal elders in South Waziristan district. No group has claimed responsibility for any of these attacks. A TTP spokesman denied involvement in the attacks, affirming that the militant group will abide by the ceasefire announced the week prior (Tolo News, 14 November 2021).