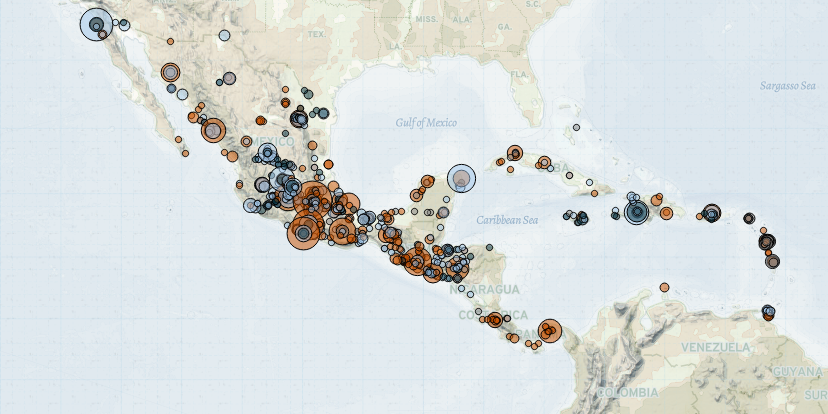 Last week in Mexico, Central America, and the Caribbean, demonstrations increased, largely due to demonstrations across the region in commemoration of the International Day for the Elimination of Violence against Women on 25 November. During a demonstration opposing violence against women in Mexico, a woman was killed with a stray bullet when members of a criminal group attacked government officials who had been attending the protest. Meanwhile, in Guadeloupe and Martinique, riots intensified for a second consecutive week as demonstrators continued to reject COVID-19 related measures. Also in Mexico, violence increased in Morelos amid clashes between state forces and criminal groups. In Haiti, cases of kidnapping for ransom increased, triggering demonstrations in Port-au-Prince. In Honduras, targeted attacks against politicians continued, with unidentified suspects killing a leader of the Liberal Party of Honduras (PLH) and a political activist in separate attacks.

In commemoration of the International Day for the Elimination of Violence against Women on 25 November, women staged demonstrations in Mexico, Honduras, Costa Rica, Guatemala, Puerto Rico, and El Salvador. Demonstrators demand justice for victims of femicide and an end to all types of gender-based violence (El Pais, 25 November 2021). In Mexico, demonstrations were recorded in 20 of the 33 states. During a protest staged outside the city hall in Guaymas, Sonora state, a woman activist was killed by a stray bullet as members of a criminal group opened fire at the local mayor and the secretary of public security (Vice, 30 November 2021). Authorities later stated that the attack targeted the secretary of public security, who had received previous threats from criminal groups for allegedly supporting the actions of a rival group (Infobae, 26 November 2021). Meanwhile, demonstrations turned violent in Ciudad de Mexico where rioters destroyed public property and clashed with police officers, leaving at least 17 people injured. Between January and October 2021, the Mexican government reports an increase by more than 4% of cases of femicide compared to the same period of 2020 (La Vanguardia MX, 23 November 2021); Honduras and El Salvador, meanwhile, have some of the highest per capita rates of femicide in the region in 2020 (ECLAC, 24 November 2021).

In Guadeloupe and Martinique, rioting intensified last week amid ongoing demonstrations against a coronavirus vaccine mandate for health workers and the mandatory use of health passes to access public places. Demonstrators barricaded roads throughout last week, following a call for a general strike by workers’ unions and social organizations on 15 November. In Guadeloupe, at least six people were injured during clashes between officers and rioters on 20 November, including police officers and firefighters who had been attacked by armed rioters. Rioters set vehicles and police stations on fire and looted stores in several locations across the island. Meanwhile, in Martinique, demonstrations significantly increased last week compared to the week prior. Rioters clashed with police officers and staged roadblocks in Fort-de-France, Le Marin, and La Trinité. Clashes in Fort-de-France left more than 13 people injured, most of them police, as demonstrators reportedly opened fire on police and attacked journalists covering the event (La 1ere, 26 November 2021). In response to the riots, the French government postponed the implementation of the pandemic-related measures to 31 December, while also stating a willingness to discuss greater autonomy for these overseas territories (France 24, 26 December 2021).

Elsewhere, in Mexico, violence increased in Morelos state last week, following clashes between state forces and criminal groups. Members of the Jalisco New Generation Cartel (CJNG) clashed with federal ministerial police in Miacatlan municipality on 23 November, leaving three cartel members and an officer dead. On the next day, a clash between national guard officers and members of La Familia Michoacana left two men dead and several officers injured. The CJNG and La Familia Michoacana have been disputing control of extortions and drug trafficking routes in Morelos through their alliances with local criminal groups (Infobae, 24 November 2021; La Silla Rota, 9 June 2021). Such violence has been worsening in Morelos in recent weeks. In November 2021, ACLED records the highest number of violent events since July 2021, and more specifically the highest number of armed clashes in all of 2021 thus far.

In Haiti, a spike in kidnappings last week triggered multiple demonstrations in Port-au-Prince. Multiple kidnappings for ransom — mainly in the Ouest department — were recorded last week, including the kidnapping of a French citizen, a notable businessman, and a relative of former President René Preval. Residents and relatives of these victims barricaded roads in Port-au-Prince on 24 November, demanding their release. Meanwhile, in the Artibonite department, a gang abducted 15 passengers on a bus on 23 November. Following the kidnapping, the gang demanded a ransom of approximately 10,000 USD per person (Alterpress, 23 November 2021). While organized violence has been decreasing in Haiti since the G-9 gang alliance declared a truce on 12 November, ACLED records the largest number of kidnappings last week since the beginning of November. Kidnappings are one of the main sources of revenue for gangs in Haiti (BBC, 21 November 2021).

In Honduras, violence remained high last week, as multiple attacks against politicians and candidates were reported in the days before the general elections of 28 November. In Azacualpa, Santa Barbara department, two assailants threw an explosive device at the house of the local mayor, who was running for re-election for the National Party of Honduras (PNH). The mayor and his daughter, a PNH candidate for local deputy, were present at the moment of the attack but unharmed. Similarly, armed men ambushed the Liberty and Refoundation Party (LIBRE) mayoral candidate for the Esparta municipality in Atlantida department. The candidate survived after his bodyguards responded to the attack. Meanwhile, unidentified gunmen killed a woman PNH supporter at her house after she returned from a political rally in Santa Barbara department, while armed suspects shot and killed a PLH party leader during a separate attack in Yoro department. According to local experts, attacks against politicians and candidates in Honduras are related to the actions of local elites and criminal groups that seek to control local politics and finance (Expediente Publico, 11 February 2021). Violence has increased during the month leading to the election. In November, ACLED records the highest number of violent events since July 2021.