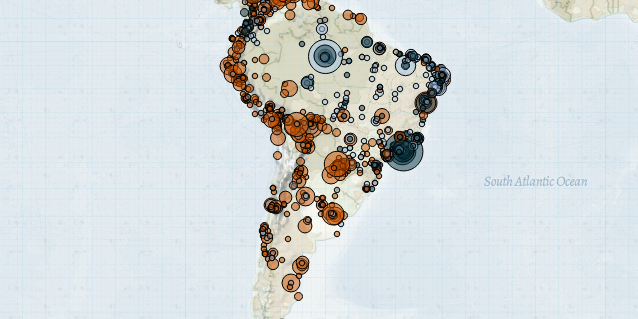 Last week in South America, violence remained at similar levels compared to the week prior, while demonstration events significantly increased. On 21 November, regional elections took place in Venezuela, while the first round of presidential elections was held in Chile. In Venezuela, armed groups interfered in the vote, leading to outbursts of violence by pro-government militias. Meanwhile, in Chile, far-right and left-wing presidential candidates will face off in a decisive runoff on 19 December, after traditional center-left and center-right candidates came in fourth and fifth place (BBC, 21 November 2021). In Argentina, a member of the Mapuche Indigenous group was killed by unknown shooters. In Brazil, citizens took to the streets to celebrate Black Awareness Day on 20 November. Lastly, in Colombia, armed clashes continued to take place between armed groups and state forces.

In Venezuela, opposition parties took part in regional elections on 21 November for the first time in four years, as local human rights activists and international observers monitored the vote (France24, 21 November 2021). With a low voter turnout of less than 42%, the United Socialist Party of Venezuela (PSUV) won in 20 of 23 state governor elections and 205 of 322 municipal elections (El País, 22 November 2021). Despite the presence of international observers, the electoral process was marred by violence and intimidation by the National Liberation Army (ELN) and PSUV-aligned militias, known as ‘colectivos,’ who patrolled polling stations and fired live ammunition at multiple locations (Diario de Los Andes, 21 November 2021; La Verdad, 30 November 2021). Unlike previous years, electoral violence was limited to specific geographic areas, such as Zulia and Táchira states, where criminal and political interests have reportedly aligned (El Tiempo, 18 February 2020; Runrunes, 29 October 2021). Additionally, European Union election observers reported the use of state funds to promote PSUV candidates and “control points,” where voters receiving government aid were required to scan their welfare cards and were reminded to vote for the PSUV party (Washington Post, 23 November 2021). Following the election results, demonstrators took to the streets to protest irregularities and to demand greater transparency in the election process.

In Chile, voters went to the polls for the first round of presidential and parliamentary elections on 21 November. Left-wing and far-right candidates will face a decisive runoff on 19 December after claiming the largest numbers of votes, as mainstream center-left and -right candidates were relegated to fourth and fifth positions (BBC, 21 November 2021). Right-wing candidate José Antonio Kast, known for his defense of former dictator Augusto Pinochet’s economic legacy (El Diario, 24 November 2021), came out on top with 28% of the vote (Servicio Electoral de Chile, November 2021). Left-wing candidate Gabriel Boric, from the Social Convergence party, came in a close second with 26% of votes (Servicio Electoral de Chile, November 2021). Boric is the representative candidate of the 2019 mass social unrest, which led to the rewriting of Chile’s Pinochet-era constitution (El Diario, 23 November 2021). Meanwhile, right-wing parties also gained seats in the upper house of congress, with conservative parties combining to secure exactly half of the senate seats (El País, 22 November 2021).

In Argentina, an Indigenous Mapuche man was shot dead and another was injured during an attack in the Río Negro province last week. Although two suspects were arrested following the attack, the circumstances and perpetrators of the attack remain unclear, with an early report suggesting that the attackers were police officers (Diario El Dia, 26 November 2021). The attack prompted demonstrations by Mapuche communities in the Río Negro province to demand justice and draw attention to their situation in the region. Tensions between the Mapuche communities and the government have grown in the last couple of decades over the group’s territorial claims  over their ancestral land in southern Argentina, which often escalates to unrest and violence (El País 1 November 2021).

In Brazil, protesters took to the streets to celebrate Black Awareness Day on 20 November, with protests reported in 19 states. The day marks the death of Zumbi dos Palmares in 1695, one of the most important quilombola leaders in Brazilian history and one of the first revolutionaries to fight slavery in Latin America (O Globo, 19 November 2021). Participants call for equal rights and opportunities for Black people and protest structural racism and racially-based violence, especially violence perpetrated by state forces. The demonstrations were also fuelled by an anti-government agenda, calling for the resignation of President Jair Bolsonaro. The protesters claim that the mishandling of the coronavirus pandemic and the dismantling of several social policies have disproportionately affected the country’s most vulnerable people, such as poor and Black communities (UOL, 20 November 2021).

Lastly, in Colombia, clashes between armed groups and security forces continued last week. In the Chocó department, military forces clashed with the ELN in Litoral Del San Juan municipality, resulting in the death of a high-ranking ELN commander (El Colombiano, 23 November 2021). In the Cauca department, six civilians were wounded when an explosive hit their home during a clash between a dissident faction of the Revolutionary Armed Forces of Colombia (FARC) and military forces in Argelia municipality. Meanwhile, United Nations Secretary-General Antonio Guterres visited Colombia ahead of the fifth anniversary of the peace agreement, highlighting advances in the implementation of the 2016 Peace Agreement between FARC and the government (UN News, 24 November 2021). However, he cautioned about the long-term sustainability of the agreement amid ongoing violence in the country (UN News, 24 November 2021). It has been estimated that around 30 dissident FARC factions are still active, despite the peace deal (INDEPAZ, 13 September 2021). Nevertheless, of the 13,000 demobilized combatants, 95% are complying with the process, and the remaining FARC dissident groups are predominantly composed of new recruits (INDEPAZ, 13 September 2021).