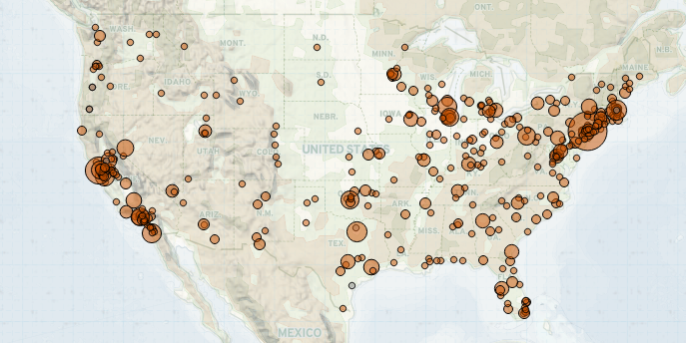 Demonstration events in the United States decreased substantially last week compared to the week prior, reaching their lowest numbers since the last week of December 2020. This decline, which coincides with the Thanksgiving holiday, was caused by a major drop in demonstrations related to the COVID-19 pandemic and a similar decline in demonstrations led by labor groups. However, demonstrations against perceived US support for the Tigray People’s Liberation Front (TPLF) amid the ongoing conflict in Ethiopia spiked last week, with demonstrations taking place in at least nine states and Washington, DC on 21 November (for more on conflict in Ethiopia, see ACLED’s Ethiopia Peace Observatory, which publishes regular weekly analysis). Meanwhile, the largest share of demonstration events last week were held against the acquittal of Kyle Rittenhouse on 19 November. These demonstrations accounted for more than one out of every five events. Finally, militia groups carried out multiple training and patrol events last week while members of militant social movements attended several demonstrations.

Demonstrations related to the Rittenhouse trial also drove an increase in demonstrations in support of the Black Lives Matter (BLM) movement for the second consecutive week. This marks the most pro-BLM demonstrations since the week of 10 July 2021. Though the majority of pro-BLM demonstrations were held against the Rittenhouse verdict, the second-largest share of these demonstrations involved people calling for the conviction of three men involved in the killing of Ahmaud Arbery. Arbery, a Black man, was killed while jogging near his home in Brunswick, Georgia in February 2020. On 24 November 2021, the three perpetrators were found guilty on charges of felony murder, aggravated assault, false imprisonment, and criminal attempt to commit false imprisonment (Associated Press, 25 November 2021). The majority of last week’s demonstrations related to the case were recorded in Georgia. Since the trial began on 18 October, pro-BLM demonstrations have been held outside the county courthouse in Brunswick, Georgia at least every other week.

Reported militia and militant social movement activity decreased last week compared to the week prior. Members of the Proud Boys participated in at least two demonstrations against vaccine mandates on 20 November: one in Los Angeles, California, and another in New York, New York (Twitter @chadloder, 20 November 2021; RawStory, 20 November 2021). These groups have been active in demonstrations against coronavirus-related restrictions and mandates since the start of the pandemic (for more, see ACLED’s A National Emergency: How COVID-19 is Fueling Unrest in the US).

Militia groups carried out multiple training events last week, with the highest number of reported events since the week of 18 September 2021. Veterans on Patrol carried out at least two patrols along the US-Mexico border in southern Arizona — their first reported patrol-related activity since 1 November 2021. The group claims it detained a large number of migrants, including over 50 children, and handed them over to US Border Patrol.1A Telegram channel belonging to Veterans on Patrol reported on 25 November that they intercepted a group of “50 teenagers, 10 children under 10 years old and a baby” near the Arizona-Mexico border before turning the detained migrants over to US Border Patrol. Meanwhile, the openly white nationalist group Patriot Front held trainings in Colorado, marking the group’s first recorded activity in the state, and in Texas. In addition, the American Contingency group held trainings in Casa Grande, Arizona; Ceres, California; Ellerbe, North Carolina; and Spanish Fork, Utah. While American Contingency trainings have not previously been recorded in Ellerbe, they have been reported in the nearby town of Hoffman.

On 22 November — the 58th anniversary of the assassination of President John F. Kennedy — at least 100 QAnon adherents gathered near the site of Kennedy’s assassination at Dealey Plaza in Dallas, Texas (Rolling Stone, 22 November 2021). Similar demonstrations at Dealey Plaza have occurred at least once a week since 1 November, when QAnon adherents gathered in anticipation of the return of his son, the deceased John F. Kennedy, Jr. According to a QAnon conspiracy theory, Kennedy Jr. is believed to have been in “hiding for 22 years” and will return to help Donald Trump retake the presidency (Independent, 4 November 2021; Rolling Stone, 22 November 2021).