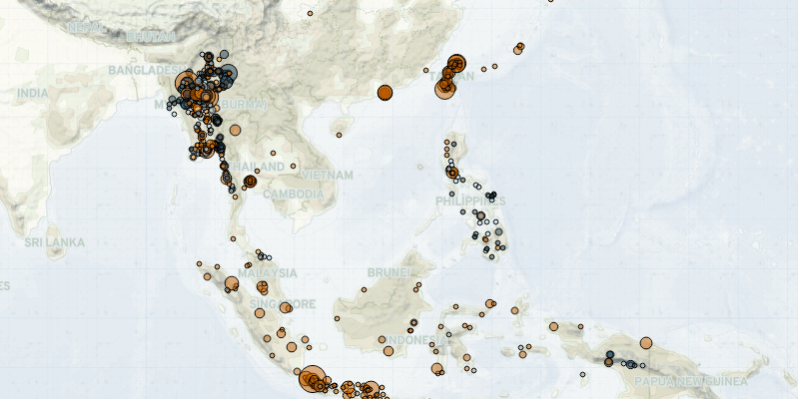 Last week in East and Southeast Asia, the Myanmar military targeted local defense forces using heavy artillery and aerial bombardments in Tabayin township, causing civilian fatalities and displacing thousands of people. Meanwhile, the UN General Assembly deferred its decision on Myanmar’s representative at the world body, a diplomatic setback for the junta’s bid for recognition. In the Philippines, there was a sharp increase in fighting between state forces and rebel groups. In Indonesia, fighting between state forces and the separatist West Papua National Liberation Army (TPNPB) continued while Papuans held pro-independence rallies across the country to coincide with West Papua Independence Day on 1 December. In Thailand, there was an increase in separatist violence in the Deep South. In Japan, people took to the streets in Naha and Tokyo to show support for the governor of Okinawa, who recently rejected a plan to relocate a US military base within the prefecture.

In Myanmar, the military continued clearance operations against local defense forces in Sagaing region last week, displacing thousands of civilians. The military launched an offensive in Tabayin township using artillery and aerial bombardments, with civilian fatalities reported. More than 5,000 villagers in Nyaung Hla village were forced to flee during the attacks (Myanmar Now, 30 November 2021). In neighboring Chin state, the military burned down dozens of houses and a church in the now-deserted town of Thantlang on 27 November. Since residents fled the town following heavy fighting between military troops and the Chinland Defense Force in September, the military has torched houses in the town multiple times. It is estimated that around 250 houses have been torched since 9 September (Irrawaddy, 26 November 2021).

In Kachin state, there was a 148% increase in political violence last week relative to the month prior (see ACLED’s Early Warning Research Hub for more), largely driven by heavy fighting between the military and the Kachin Independence Organization/Kachin Independence Army (KIO/KIA) in Hpakant and Mohnyin townships. The clashes come one week after the military launched airstrikes in KIO/KIA-controlled territory.

Meanwhile, in a major setback to the junta’s bid for international recognition, the UN credentials committee deferred a decision on Myanmar’s representative at the General Assembly on 1 December. The deferment means that Kyaw Moe Tun, appointed by the ousted National League for Democracy (NLD)-led civilian government1On 6 December, President U Win Myint and State Counsellor Daw Aung San Suu Kyi were sentenced to four years imprisonment on politically motivated charges; their sentences were subsequently reduced to two years and they will remain in their current place of detention. Both NLD leaders were ousted and detained by the military in the 1 February coup. Daw Aung San Suu Kyi faces an additional 10 politically motivated charges (Human Rights Watch, 6 December 2021). As it falls outside the temporal scope of this Regional Overview, the impact of this event on conflict and protest trends will be explored in next week’s Regional Overview. , will continue to represent Myanmar until at least the next General Assembly session in September 2022 (Myanmar Now, 3 December 2021).

Meanwhile, the Islamist group Dawlah Islamiyah suffered another blow to its top leadership in the Philippines last week, when the military killed its new emir, just over a month after killing the previous emir. Asim Karinda (alias: Abu Azim), who the military claim was recently appointed emir of Dawlah Islamiyah in the Philippines, was killed along with four other Dawlah Islamiyah militants in a military operation in Mamasapano, Maguindanao province on 2 December (Manila Bulletin, 3 December 2021). In the past decade, a number of Islamist militant groups operating in the southern Philippines have pledged allegiance to the Islamic State (IS). Many of these IS-affiliated groups have been fighting under the name Dawlah Islamiyah (International Crisis Group, 27 June 2019).

In Indonesia, armed clashes between the military and the separatist TPNPB continued in Papua province last week, as the TPNPB targeted a wood production company in West Papua province. In Papua province, a soldier was killed and two wounded during fighting in Suru-Suru district, Yahukimo Regency. In Maybrat regency, West Papua province, the TPNPB carried out an arson attack targeting a wood production company, and set fire to eight houses belonging to the company’s workers. The rebels claim that the company is owned by the Indonesian military (Suara Papua, 2 December 2021). It is the first arson attack recorded by ACLED in West Papua province. The TPNPB openly opposes any infrastructure development projects carried out by the central authorities, accusing the Indonesian government of attempting to expand its influence in the region (The Diplomat, 24 December 2018).

Meanwhile, Papuans across Indonesia took to the streets on 1 December to celebrate West Papua Independence Day and to call for Papuan self-determination. The day marks the anniversary of West Papua’s declaration of independence from Dutch colonial rule in 1961. In Jayapura, Papua province, eight students were arrested for raising the banned Morning Star flag, used by pro-independence Papuans as a symbol of the struggle for independence. The eight protesters were charged with treason (The Jakarta Post, 3 December 2021). In Denpasar, Bali province, Papuan students clashed with members of the nationalist group Archipelago Garuda Patriot (PGN), which opposes Papua independence.

In Japan, hundreds of people protested in Naha and Tokyo against the central government’s plan to transfer a US military base within Okinawa last week (Mainichi Shimbun, 30 November 2021; Okinawa Times, 3 December 2021). Protesters showed support for the Okinawa governor, who recently rejected the central government’s plan to relocate the US military base from a residential area in Ginowan to a less populated area in Henoko (Okinawa Times, 4 December 2021). The governor claims that the central government’s investigation of the design change is insufficient and that the authorities failed to address the issues of the weak ground found in a planned reclamation area (Japan Times, 25 November 2021). Anti-military base protests are one of the largest protest trends in Japan. The protests center on concerns over environmental pollution, instances of sexual violence involving US troops, military accidents, and the negative impact on sea life and fishery in the region.