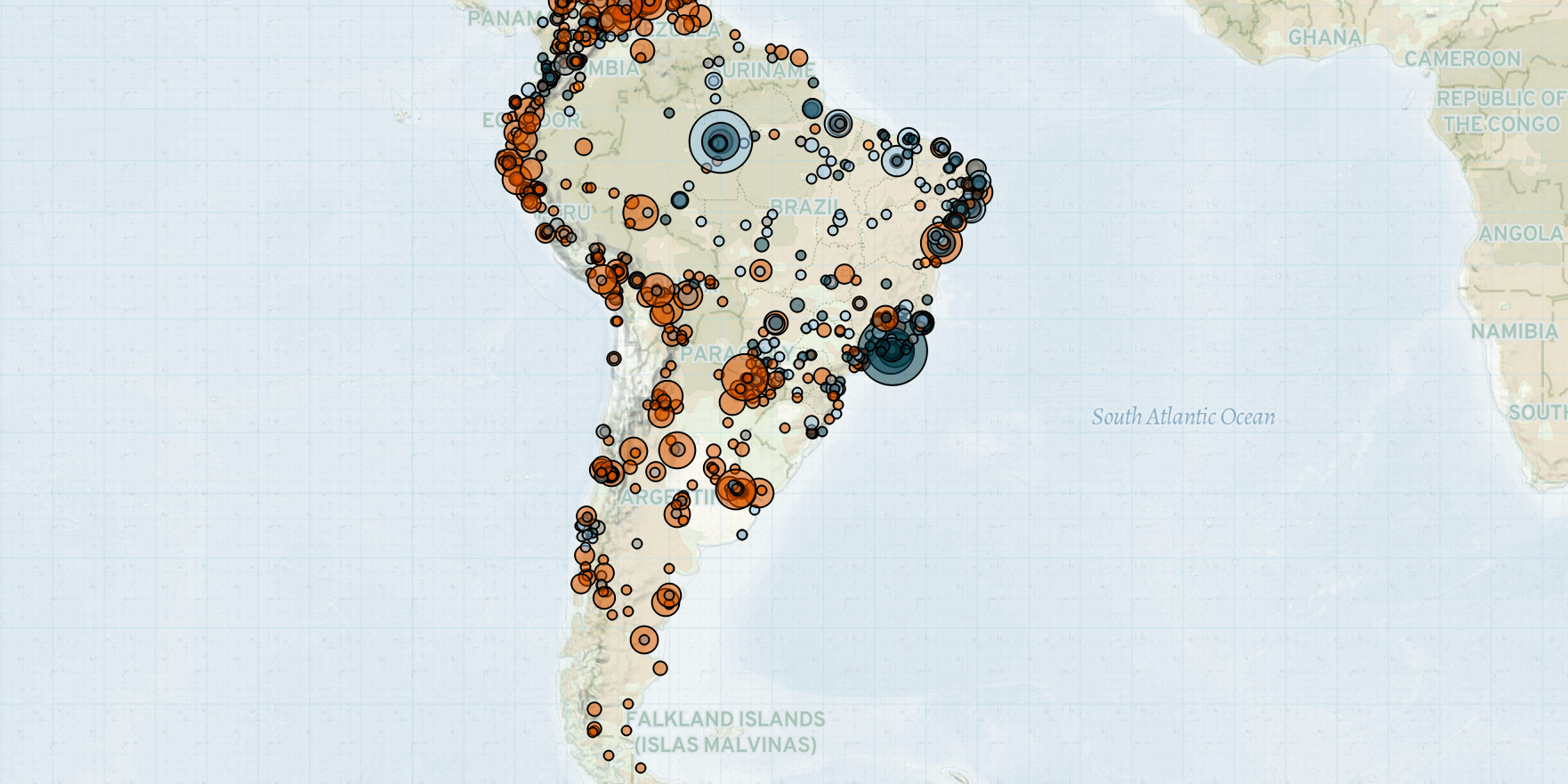 Last week in South America, political violence remained at similar levels compared with the week prior. In Venezuela, two top leaders of the Segunda Marquetalia dissident faction of the Revolutionary Armed Forces of Colombia (FARC) were killed in separate events in Apure state. Meanwhile, opposition groups continued to protest in Barinas state against the results of the 21 November regional elections. In Colombia, despite an overall decrease in violence, armed actors continue to launch targeted attacks against vulnerable communities and social leaders. Meanwhile, 33rd FARC Dissident Front activities drove a significant spike in violence in the Norte de Santander department. In Brazil, eight members of a ‘New Cangaço’ armed group were killed during a clash with the police in Goiás state, while at least three militia members were killed in Rio de Janeiro state during fighting between the Zinho and Tandera militias. Violence also significantly increased in Santa Catarina state. Finally, in Paraguay, state forces accused the insurgent group Paraguayan People’s Army (EPP) of carrying out a robbery and abduction in rural areas of the San Pedro department.

In Venezuela, two leaders of the Segunda Marquetalia dissident faction of the FARC were killed in separate events in Apure state last week. On 5 December, Henry Castellanos Garzón (alias: Romaña) was killed by unidentified perpetrators at one of his training camps in Elorza municipality, while Hernán Darío Velásquez (alias: El Paisa) was killed on the same day near Paéz Municipality. The circumstances of El Paisa’s death are unclear, with reports claiming he was shot dead in an ambush by the 10th Dissident Front of the FARC or in a mutiny orchestrated by his fighters (InSight Crime, 9 December 2021; El Tiempo, 9 December 2021). Three of the four top commanders of the Segunda Marquetalia have died thus far this year —  Seuxis Pausias Hernández Solarte (alias: Jesús Santrich) was killed on 17 May this year during a clash with the Gentil Duarte FARC Dissident Front. Only top commander Iván Márquez is left to lead the Segunda Marquetalia organization as it battles not only other FARC dissident fronts but also the National Liberation Army (ELN), the Colombian military, and various gangs that operate in the border region (El Universal, 8 December 2021).

Meanwhile, a massive anti-government protest was held in Barinas city on 4 December, with self-declared interim President Juan Guaidó and opposition Democratic Unity Roundtable (MUD) gubernatorial candidate Freddy Superlano in attendance (El Nacional, 4 December 2021). Demonstrators call for the recognition of Superlano’s victory in the 21 November regional elections, denouncing the Supreme Court’s decision to invalidate the election results and disqualify Superlano from participating in new elections scheduled for 9 January 2022. Superlano had been disqualified on the grounds that there were administrative penalties deriving from his work as a legislator from 2015 to 2020 (San Diego Union Tribune, 4 December 2021). The Supreme Court subsequently disqualified Superlano’s chosen successors — Aurora Silva de Superlano and Julio César Reyes — from substituting him on the MUD ticket (El Nacional, 6 December 2021).

In Colombia, violence decreased last week compared to the week prior. Nevertheless, minority groups and vulnerable communities continue to be targets of violence in the country. In Santa Marta city, Magdalena department, unidentified armed individuals shot dead a trans woman and well-known LGBT+ social leader. The victim, who also worked with land restitution projects for victims of armed conflict, had previously survived two attacks in 2020. Although the perpetrators of the killing have not yet been confirmed, the victim had been reportedly receiving threats from the Gulf Clan in the past three months (Kien y Ke, 10 December 2021). Her killing prompted criticism from humanitarian organizations of the government and its inability to guarantee the security of the country’s political and human rights defenders (El Pais, 10 December 2021). Such targeted violence against women in politics, including human rights defenders, has been on the rise around the world, with Colombia topping the list, second only to Mexico, in the number of such attacks since the start of 2020 (for more, see this recent ACLED report).

Meanwhile, in the Norte de Santander department, violence spiked 155% last week relative to the month prior (see ACLED’s Early Warning Research Hub for more). The increase was mainly driven by activities of the 33rd FARC Dissident Front in Tibu municipality, as the group clashed with other armed groups and abducted journalists covering armed conflict in the area. On 5 December, suspected 33rd FARC Dissident Front members also threw a grenade at a voting station for the election of the municipal youth council, injuring three soldiers who were guarding the area and two civilians.

In Brazil, fighting between armed groups and targeted attacks continue to be reported across the country, with violence remaining at similar levels last week compared to the week prior. In the city of Araçu, Goiás state, police clashed with members of a ‘New Cangaço’ armed group during an arrest operation, which led to the killing of eight suspects. The ‘New Cangaço’ modality involves heavily armed criminal groups who blow up bank agencies, post offices, ATMs, and lottery houses, usually in small- and medium-sized cities. According to the military police, the group was planning a significant attack in the nearby city Nova Crixás (Itatiaia, 8 December 2021). Last week, organized crime groups also blew up bank agencies in the states of Maranhão and Paraná. In Bom Jardin city, Maranhão, suspects used civilians as human shields during a heist, although no casualties were reported.

Meanwhile, violence escalated again in Rio de Janeiro state last week amidst an ongoing territorial dispute between the Zinho militia and the Tandera militia. In the Campo Grande neighborhood, in the West Zone of Rio de Janeiro city, suspected members of the Tandera militia ambushed and shot a member of the Zinho militia to death with over 95 bullets (Globo Extra, 7 December 2021). Days after the attack, in the nearby Seropédica city, two members of the Tandera militia were executed by a former member of the group, who had recently joined the Zinho militia (Crimes News RJ, 8 December 2021). The two groups have been disputing influence in the West Zone of the city since the killing of the leader of the largest Rio militia, the Bonde do Ecko, on 13 June 2021, during a civil police operation. Police militia groups extort money from residents and merchants in several communities of the area while also engaging in the illegal provision of internet and TV signals, the sale of water and gas for domestic use, and public transportation (G1, 16 September 2021).

Elsewhere in Brazil, fighting between armed groups and targeted attacks continued last week. In Santa Catarina state, three fatalities were reported, stemming mainly from targeted attacks against civilians in the neighboring cities of Joinville and São Francisco do Sul. These attacks contributed to a 300% spike in violence in Santa Catarina state last week relative to the month prior (see ACLED’s Early Warning Research Hub for more).The reasons behind the violence are unclear; however, Joinville, the largest city of Santa Catarina state, is the scene of a dispute between the largest organized crime group of the state, the First Catarinense Group (PGC), and the First Capital Command (PCC).

Finally, in Paraguay, state forces accused the EPP of carrying out two violent events in rural areas of the San Pedro department (ABC, 6 December 2021; Última Hora, 7 December 2021). In Tacuati municipality, around 10 hooded armed perpetrators robbed a farm and forced its workers to slaughter two cows, before fleeing on the Ypane river. In Santa Rosa del Aguaray municipality, two days later, unidentified armed perpetrators abducted four workers, releasing three of them moments later. Although the perpetrators of both attacks have not been confirmed, the tactics used match those of the EPP. The EPP, the main insurgent group active in Paraguay, is a small left-oriented armed organization that aims to revendicate expropriated land belonging to businessmen (BBC, 17 September 2020). The group mainly conducts sporadic attacks on farms along the border with Brazil but has also been involved in extortion and the kidnapping of political figures in recent years (BBC, 17 September 2020).