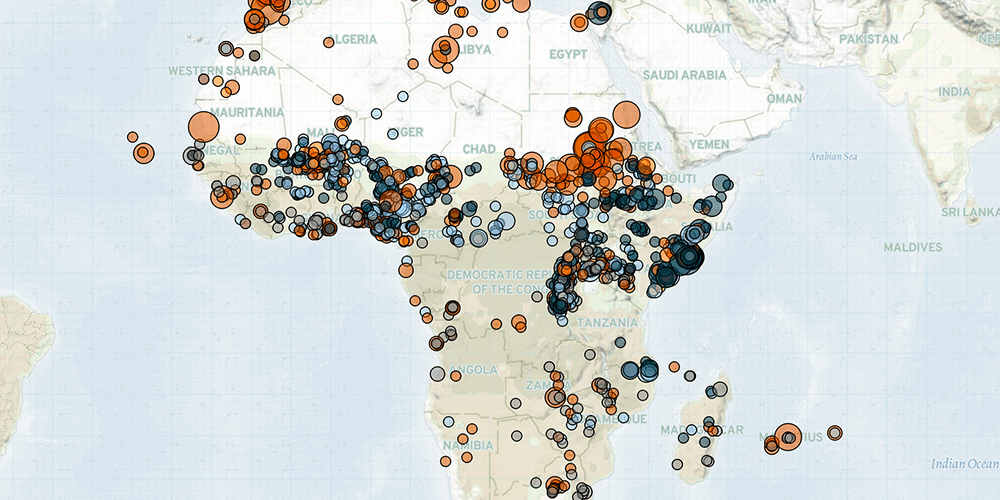 During the past four weeks in Africa, Islamist militants engaged in deadly clashes in Burkina Faso, Mali, and Nigeria amid continuing military operations against these groups; attacks by Al Qaeda affiliated militants continued in Benin highlighting the growing militancy in the country; the Burundian army crossed the border into eastern Democratic Republic of Congo and established bases to pursue RED-Tabara rebels; and intercommunal violence surged in Nigeria, Chad, Somalia, Kenya, and South Sudan.

In Burkina Faso, violent events involving Islamist militants were concentrated in the regions of Boucle du Mouhoun, North, Center-North, East, and Sahel. Notably, Jama’at Nusrat al-Islam wal-Muslimin (JNIM) militants attacked a convoy of Volunteers for Defense of Homeland (VDP) fighters in the North region, leaving over 40 killed, including a Loroum VDP leader. Burkinabe and French forces responded to militants’ attacks with ground operations and airstrikes in several areas, particularly in the Boucle du Mouhoun, North, and Sahel regions, and killed scores of militants. JNIM fighters also engaged in fatal clashes with Islamic State West Africa (ISWAP) Greater Sahara faction militants in Oudalan province of Sahel region as well as Gao region in Mali where clashes between the two groups followed incursions by ISWAP militants on three villages in N’tillit commune the day before. Further, continuous deadly attacks by JNIM militants occurred across several central and southern regions, including Mopti, Segou, Sikasso, Koulikoro and Kayes regions. Malian forces responded with air and ground operations against JNIM, resulting in scores of fatalities. The operations were accompanied by accusations of extrajudicial killings, allegations that Malian authorities denied. Reports have swirled around the involvement of Russian military advisors or Wagner mercenaries during the operations in central Mali (RFI, 5 January 2022), as well as the deployment of Russian military forces to the town of Timbuktu following French withdrawal (Reuters, 6 January 2022). In neighboring Niger, suspected ISWAP Greater Sahara faction militants carried out two lethal ambushes on National Guard forces, in one event accompanied by Tuareg and Arab militiamen, on the border between Tillaberi and Tahoua regions, resulting in dozens of fatalities. In addition, JNIM claimed responsibility for a double-attack on security forces’ positions near the town of Makalondi in Tillaberi, and was likely behind several deadly IED attacks in the same area.

In Benin, presumed JNIM militants launched a fatal attack against a Beninese army position near Tanguieta in the department of Atacora, just less than a month after the group claimed its first attack in the country in the same department. Another IED attack, and the second of its kind recorded by ACLED in Benin, also targeted military forces in the Tanguieta commune last week. This trend shows a rapidly growing militancy in Benin which has persisted for years along the country’s northernmost borders.

In Nigeria, ISWAP Lake Chad faction militants carried out numerous lethal attacks against civilians as well as Nigerian and Nigerien forces in Borno state. In Maiduguri, ISWAP conducted two remote attacks, including shelling, days ahead of the planned visit of President Buhari. The group also clashed with Boko Haram (JAS1 Jamaatu Ahli is-Sunnah lid-Dawati wal-Jihad) fighters near Banki in Bama local government area (LGA) due to disagreements over surrendered fighters as well as in Sambisa Forest Reserve where several dozen militants were reported killed. Meanwhile, operations by Nigerian forces, in some cases along with Nigerien forces of the Multinational Joint Task Force (MNJTF), against JAS and ISWAP militants in northern Borno resulted in dozens of fatalities, including a top ISWAP commander, as well as the destruction of ISWAP and JAS infrastructure. Elsewhere, violence by communal militia continued unabated in the northeast, particularly in Kaduna and Zamfara states. In Giwa LGA, a Kaduna militia attack across villages in Idasu left at least 38 people dead while in Zamfara state, a district head was killed along with several other civilians. In response to militia activities, Nigerian security forces conducted operations, including airstrikes, killing and wounding several Zamfara militia leaders. The fleeing militia attacked several communities in Anka and Bukuyum LGAs, triggering deadly clashes with Yansakai Militia. These trends contributed to a 100% increase in violence in the state last week relative to the month prior (for more, see ACLED’s Early Warning Research Hub). Further in the south, violence against traditional rulers continued, especially in Imo state. Lastly, multi-day violence erupted by Fulani pastoralists against Tiv farmers in Nassarawa state in retaliation for the killing of their kinsman, leaving dozens of farmers dead and thousands displaced. Inter-communal violence between farmers and pastoralists also escalated in Chad with several people killed in Mandoul and Batha regions.

In the Central African Republic, a new faction of Anti-Balaka aligned with the Touadera government began fighting alongside military forces (FACA) and Wagner Group mercenaries, killing dozens of civilians in the Ouaka prefecture. They also beheaded a suspected Union for Peace in the Central African Republic (UPC) leader and former mayor along with his family near Bambari. Additionally, Wagner Group mercenaries continued their attacks against civilians. In one incident alone, over a dozen people were killed when Russian mercenaries launched an attack on Pande mining site in the Mambere-Kadei prefecture.

In the Democratic Republic of Congo (DRC), joint ground and air operations by Congolese (FARDC) and  Ugandan armed forces continued against the Allied Democratic Forces (ADF) in eastern DRC, with government forces seizing strategic militant positions in Beni territory of North Kivu province. Meanwhile, ADF established new bases in North Kivu, particularly in Ruwenzori sector. Elsewhere, in Ituri province, violence concerning the Cooperative for Development of Congo (CODECO) was concentrated in Djugu territory, with FARDC airstrikes against CODECO in Andisa village and the mining area of Mongbwalu resulting in over 30 fatalities among CODECO fighters. In South Kivu province, repeated clashes between FARDC and a coalition of Mayi Mayi and Banyamulenge militias resulted in several exchanges of territorial control in Fizi territory. Lastly, reports emerged that elements from the Burundian army crossed the border into South-Kivu province and established bases in Uvira territory where they clashed with the Resistance to the Rule of Law in Burundi (RED-Tabara) rebels as well as the FARDC.

In Somalia, Al Shabaab militants launched several attacks, targeting former and current government officials. In Jowhar town in the Middle Shabelle region, two members of parliament and a senior police officer were injured in an IED explosion while militants beheaded the leader of the Buur Hakaba district court in Bay region following a raid on his house. Elsewhere, multi-day clashes were reported between two rival factions of Puntland security forces in Bosaso town in northeast Somalia following the dismissal of the Puntland Security Forces (PSF) commander. The fighting resulted in dozens of casualties and hundreds of people displaced. Moreover, inter-clan clashes surged, particularly in Hiraan and Sool regions, over disputes related to land and its use. In neighboring Kenya, Al Shabaab attacks against civilians and security forces left several dead and injured in multiple areas in Lamu county. In response, the government imposed a month-long dusk-to-dawn curfew in the county. Elsewhere, attacks by militia labeled as ‘bandits’ increased in central and northern regions, with the highest number of fatalities in Marsabit county where over 20 people were killed and hundreds displaced. These trends resulted in a 95% increase in violence in the country last month relative to the year prior (for more, see ACLED’s Early Warning Research Hub).

In South Sudan, heavy fighting broke out between Sudan People’s Liberation Movement – In Opposition (SPLM-IO) loyalists and members of the SPLM-IO Kitgweng faction in Manyo county of Upper Nile state, with reports suggesting at least 47 were killed. The fighting comes amid postponed peace talks between the government and Kitgweng faction (United Nations Security Council, 7 December 2021). Further, since late December and into the first week of January, there was a marked increase in deadly violence by Sudanese pastoralists in Northern Bahr el Ghazal state along the border with Sudan, with Misseriya pastoralists being implicated in the attacks.

In Sudan, mass demonstrations continued across the country, denouncing the military takeover and the political agreement between Prime Minister Abdalla Hamdok and the military. Over a dozen people were killed and hundreds injured as security forces suppressed the demonstrations, bringing the total number of fatalities in anti-coup demonstrations since 25 October to over 40. Following weeks of increased violence within the country, with security forces also being accused of sexually assualting more than a dozen women in Khartoum, Hamdok announced his resignation. Despite his resignation, demonstrations continued last week calling for a civilian government.

Lastly, demonstrations over elections also took place in Libya, following the postponement of the presidential election which was originally scheduled to begin on 24 December. A week ahead of the planned election, heavy fighting between a militia affiliated to General Khalifa Haftar and Tariq Ibn Ziyad Brigade ensued in Sabha after the latter attacked security forces in the city. Further, numerous deadly IED explosions were reported in western Libya, resulting in several civilian casualties.