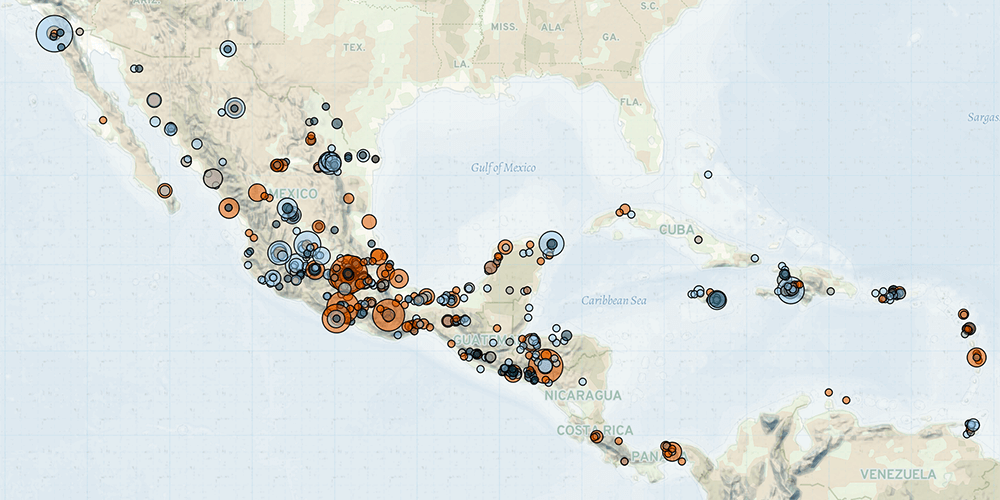 Over the past month in Mexico, Central America, and the Caribbean, violence remained high amid gang attacks against civilians, including high profile attacks on politicians in Haiti and Mexico. In Haiti, members of the Les Revolutionnaires armed group carried out a failed assasination attempt on Prime Minister Ariel Henry during 1 January Independence Day celebrations. In Mexico, attacks against politicians increased last month, including separate attacks by armed suspects against a state senator and an elected mayor during the inauguration of new local governments. Meanwhile, in Zacatecas and Nuevo Leon states, gang violence continues amid actions of cartels that operate in these states. Similarly, in El Salvador and Jamaica, gang-related attacks prompted an increase in violence. In Guatemala, a land conflict between the Nahuala and the Santa Catarina de Ixtahuacan Indigenous communities intensified.

In Haiti, members of the Les Revolutionaries armed group opened fire on government officials, including Prime Minister Henry, at a church where official Independence Day celebrations were being held in Gonaives, Artibonite department (Haiti Libre, 30 December 2021). Police responded to the attack and a clash ensued, leaving four people dead, including three officers. Following the attack, Henry claims that it was a direct attack on his life (France 24, 3 January 2022). The incident comes days after members of Les Revolutionnaires and local residents rioted on 28 December against Henry’s planned attendance at the traditional commemoration in Gonaives. Rioters burned tires and destroyed the podium that was going to be used for the celebrations.

Elsewhere, dozens of people were killed during fighting between the G-9 gang alliance and rival gangs in Port-au-Prince over the past month. In Bel-Air neighborhood, members of the G-9 clashed on 31 December with rival gangs, leaving at least 15 people dead and several houses on fire. Further clashes in the neighboring district of Delmas on 2 January resulted in at least 10 more deaths.

Meanwhile, demonstrations increased in Haiti over the past month compared to the month prior,  as people demonstrated against increased fuel prices and poor socio-economic conditions. The ongoing demonstration activity comes in response to rises in fuel prices prompted by the government’s decision to suspend fuel subsidies on 10 December. Demonstrators also demand access to public services and social aid from the government.

In Mexico, attacks against politicians and newly-elected officials increased over the past month, as local officials assumed office following elections in June 2021. In Mexico state, an unidentified armed man shot at a municipal senator for the governing National Regeneration Movement party (MORENA) when she was on her way to the mayoral inauguration in Temoaya on 19 December. The victim was unharmed and reported that the attack was related to the rising insecurity in the state (Excelsior, 19 December 2021). Mexico is the most dangerous country in the world for women in politics, which includes women candidates for office and politicians (for more, see this recent ACLED report). In Veracruz state, armed men shot at the MORENA mayor-elect of Soconusco, two days before he took office on 30 December. The victim who had reported previous threats against his life by alleged political rivals managed to escape the attack unharmed (Imagen del Golfo, 26 November 2021). In Zacatecas state, two recently-elected municipal delegates were also shot and killed by gang members in separate attacks in Guadalupe and Morelos municipalities, on 30 December.

Meanwhile, members of the Jalisco New Generation Cartel (CJNG) killed 10 people and abandoned their bodies on 6 January outside the offices of the state governor in Zacatecas municipality. The governor attributes this and other attacks with multiple fatalities to retaliations of criminal groups for recent security operations in Zacatecas state (Forbes, 6 January 2021). Since 24 November 2021, the federal government has deployed army, national guard, and state police officers to increase law enforcement capacity and to fight criminality in Zacatecas as part of the Support Plan for Zacatecas (Gobierno de Mexico, 24 November 2021). Insecurity in Zacatecas is mainly related to the ongoing disputes between the CJNG and the Sinaloa Cartel for the control of production and distribution of synthetic drugs (Infobae, 6 January 2022).

Similarly, in Nuevo Leon state, gang violence spiked over the past month, driven by attacks against civilians and clashes between rival gangs. Members of the Gulf Cartel and Noroeste Cartel clashed in Doctor Coss municipality on 16 December, resulting in at least seven fatalities. Municipalities along the border with Tamaulipas states, including Doctor Coss, are disputed by rival cartels seeking to gain control of drug, migrant, and weapons trafficking routes that connect with the US border (Infobae, 15 December 2021). In December 2021, ACLED records the highest number of political violence events in this state since July 2021.

In Jamaica, political violence also increased over the past month, driven by multiple gang-related attacks in Kingston. Gang-related violence over the past month contributed to a 27% increase in violence compared to the past year (see ACLED’s Early Warning Research Hub for more). According to police, most of the killings recorded in 2021 are related to the actions of gangs that dispute the control of neighborhoods (Jamaica Observer, 14 November 2021).

Meanwhile, in Guatemala, land conflicts between the Nahuala and the Santa Catarina Ixtahuacan communities of the Mayan Indigenous group intensified over the past month. Armed members of the Nahuala community attacked Santa Catarina Ixtahuacan residents as they were being escorted by police to collect a harvest in Chiquix village, Solola department, on 17 December. During the attack, 13 Santa Catarina Ixtahuacan residents and an officer were killed. President Alejandro Giammatei declared a state of siege following the attack, which was ratified by Congress on 20 December, ordering the deployment of around 2,000 military and police officers to restore security in the department (Prensa Libre, 22 December 2021). Despite the government intervention, violence continued into the first week of January with a police officer killed during clashes between armed members of the Nahuala community and state forces on 7 January. The Nahuala and the Santa Catarina Ixtahuacan communities have been engaged in a land conflict for more than a century, during which government-led negotiations to define municipal borders and the distribution of natural resources have been unsuccessful (Prensa Comunitaria, 30 September 2021). Local experts also claim that criminal groups have recently become involved in the conflict, seeking to control drug trafficking routes and demanding property deeds in exchange for taking members of these communities into the US (BBC, 22 December 2021).