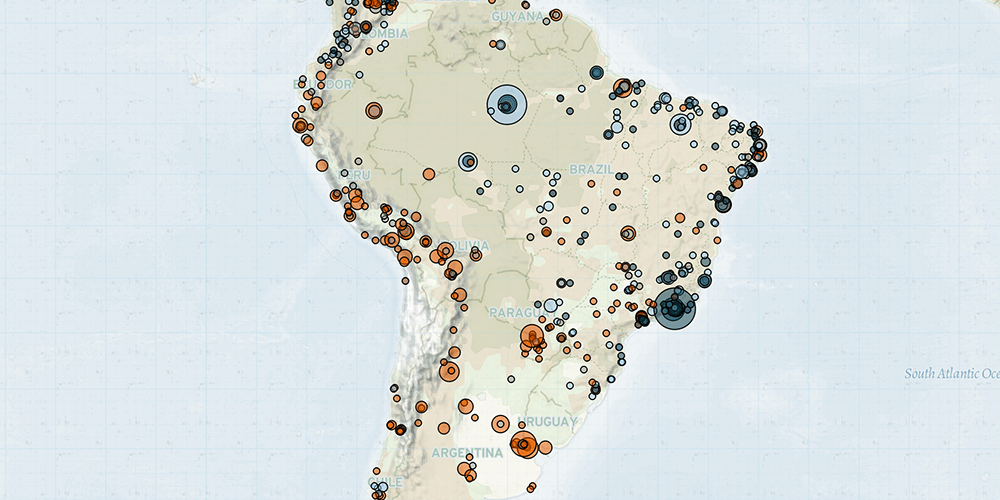 Over the past month in South America, violence decreased compared to the month prior, while demonstrations decreased by over half amidst the end-of-year holidays. In contrast, violence increased in Venezuela and Colombia, with multiple groups fighting over control of border areas in an outburst of violence in early January. In Chile, left-wing candidate Gabriel Boric was elected as the new president on 19 December, while Indigenous militia activity continued to be reported amidst the elections. In Argentina, environmental concerns led demonstrators to take to the streets, mainly in Chubut province. Protest activity against coronavirus-related measures was also reported in several countries of the region. Finally, in Brazil, while violence decreased over the past month, violent drug trafficking disputes over territorial control took place in several states.

In Venezuela, the beginning of 2022 was marked by significant battles involving Colombian armed groups, following a decrease in disorder in December. On 1 January, fighting erupted in Barrancas del Orinoco city, Monagas state, when an estimated 15 to 20 guerrilla fighters entered the town. The action was described as a highly coordinated operation to ambush and kill leaders of the El Sindicato organized crime group (Tane Tanae, 2 January 2022; El Pitazo, 2 January 2022). A previously unknown Colombian armed group referring to itself as AFRO claimed responsibility for the attack. The group states that it aims to eliminate the El Sindicato group, which has exerted de facto control over the area for the past 15 years (El Pitazo, 4 January 2022). The clash resulted in at least nine deaths with as many as 30 wounded, though the exact casualty count is still unknown. Barrancas del Orinoco is strategically important due to its position on the Orinoco river, making it a gateway connecting the illicit trade of narcotics, minerals, and gasoline with international trade routes (Efecto Cocuyo, 6 January 2022).

Meanwhile, on 2 January, violence broke out between the National Liberation Army (ELN) and dissident forces of the Revolutionary Armed Forces of Colombia (FARC) on the border between Apure state, Venezuela, and Arauca department in Colombia. At least 27 deaths were reported during clashes across four municipalities in Arauca. In a publicly issued statement, the ELN characterized the violence as “self-defense.” They also accuse the 10th, 28th, and 44th fronts of FARC dissidents of collaborating with the Colombian government and the American Central Intelligence Agency (CIA) to invade ELN territory and erode the group’s power (El Tiempo, 4 January 2022; Twitter, @Antorchera, 4 January 2022). However, the Colombian Prosecutor’s Office later stated that they believe that the victims did not die in the armed confrontations, but were rather unarmed and taken from their houses to be executed (El Tiempo, 6 January 2022).

The border clashes are part of a more significant territorial conflict pitting the seemingly-allied forces of the ELN and Second Marquetalia against the 1st, 7th, 10th, and 28th fronts of FARC Dissidents under the overall command of the 7th Front leader Gentil Duarte (Insight Crime, October 13 2021). While Ivan Marquez, the leader of the Second Marquetalia, has long stated his desire for an alliance with the ELN, the degree of actual coordination between the two groups is not formally known (Insight Crime, 18 May 2021). The eruption of violence between Duarte’s FARC dissident group and the ELN lends credibility to reports that the ELN has publicly allied itself with the Second Marquetalia in the battle against Duarte and his allies for control of the Colombian border (El Impulso, 4 January 2022).

In another significant development in the region, Chileans elected former student leader Boric as the new president of Chile on 19 December (BBC, 20 December 2021). Boric, the candidate for the left-wing Social Convergence party, won over 55% of the vote in a runoff against far-right candidate José Antonio Kast from the Republican party (Biobio Chile, 20 December 2021). Kast is known for his defense of former dictator Augusto Pinochet’s economic legacy (El Diario, 24 November 2021), while Boric was the representative candidate of the 2019 mass demonstrations, which led to the rewriting of Chile’s Pinochet-era constitution (El Diario, 23 November 2021). Boric will be sworn in as president on 11 March 2022 (Al Jazeera, 23 December 2021).

Meanwhile, Indigenous militia groups continued to carry out arson attacks against farmhouses and logging companies in Chile over the past month, mainly in the southern regions. In one such attack, Mapuche militiamen set a sawmill and two trucks on fire near Talca municipality in the Maule region. The event is the northernmost arson attack ever reported since the first Mapuche attack in 1997 (El Mercurio, 31 December 2021). The effects of the increasing number of attacks led by Indigenous militias could be seen in the recent presidential vote. Despite winning only five of the 16 regions in the country, far-right candidate Kast won the regions of Araucanía and Biobío (Biobio Chile, 20 December 2021). During his electoral campaign, Kast expressed the need for harsher measures to deal with Indigenous militias in these regions, which he calls a threat to national security (La Tercera, 22 November 2021).

In Argentina, environmental groups led several demonstrations over the past month. In mid-December, demonstrations were held for two consecutive weeks after the Chubut provincial legislature approved a bill to authorize mining in the departments of Telsen and Gastre. While demonstrations remained mostly peaceful, on 20 December, anti-mining demonstrators set fire to the office of El Chubut newspaper in Trelew city. Days prior to the fire, the newspaper received threats on its social media account, after it had printed a call for applications from the Chamber of Suppliers and Mining Entrepreneurs (Red43, 20 December 2021). Following an intense backlash from the population, the state legislature decided to withdraw the bill, after which the state governor stated that a referendum should be scheduled to decide on the subject (La Nación, 20 December 2021). The plateau departments of Telsen and Gastren are rich in silver and lead reserves, many currently under exploitation as a result of contracts from multinational companies (La Nación, 21 December 2021). Locals have been demonstrating against the bill in recent months due to the adverse effects it would have on the environment and water quality in the region. Meanwhile, environmental groups also held massive protests in the beginning of January in the cities of Buenos Aires, Chapadmalal, Mar del Plata, and Lujan. Protesters took to the streets against Resolution 436/2021, which authorizes oil exploitation by a Norwegian company 300 kilometers east of the Mar del Plata coast (La Nación, 4 January 2022).

Meanwhile, protests against coronavirus restrictions and vaccines were reported over the past month in Argentina, Bolivia, Ecuador, Paraguay, and Peru. While South America is now the most vaccinated region in the world (Reuters, 28 December 2021), misinformation continues to fuel a small protest movement against coronavirus-related measures. In Bolivia, several protests took place in the first week of January against newly-implemented measures requiring proof of vaccination or a negative COVID test to enter public and private places (France24, 8 January 2022). Analysts claim that vaccine hesitancy in the country is fueled by the refusal of prominent politicians to be vaccinated, together with a strong belief in traditional methods and internet-shared misinformation on vaccination risks (France24, 8 January 2022). Vice President David Choquehuanca only received his first vaccine shot in January 2022 following increasing public pressure (France24, 8 January 2022). The vice president claims he had previously fought the virus twice by using Indigenous medical treatments, eating grass, and ingesting chlorine dioxide – a substance considered highly dangerous by the World Health Organization, yet approved for coronavirus treatment in Bolivia (France24, 8 January 2022).

In Brazil, violence decreased by a quarter over the past month compared to the month prior, despite drug trafficking territorial disputes continuing to provoke violent events in several states. In Fortaleza city, Ceará state, six people were killed and five others were injured on Christmas day (25 December) during a drug trafficking territorial clash between rival groups in the Sapiranga neighborhood. Following the clash, residents state that the area has become a battleground between rival drug trafficking groups (G1, 30 December 2021). Likewise, in Piauí state, six people were killed in three days of clashes between rival organized crime groups and state forces (G1, 15 December 2021). On 13 December, the increasing violence in Piauí state led to the change of the local military police commands in Parnaíba and Luís Correia in an attempt to coordinate more effective public security measures (Agora Piauí, 13 December 2021). Drug trafficking-related disputes have become more frequent in the region as prominent national gangs try to control areas previously dominated by local groups (G1, 15 December 2021).

Additionally, clashes between rival drug trafficking groups were also reported in Salvador city, Bahia state. On 5 January, members of the Tropa do A gang clashed with the Bonde do Maluco gang (BDM) in the Fazenda Coutos neighborhood. Local, smaller gangs have been fighting for territorial control of the city since the late 1990s (Bahia 190, 4 January 2022). Salvador is now considered the most profitable Brazilian state capital for organized crime groups outside the Rio de Janeiro-São Paulo hub (Bahia 190, 4 January 2022). The recent clashes contributed to a 113% spike in violence in Bahia state last week relative to the month prior (see ACLED’s Early Warning Research Hub for more).

Meanwhile, civilians continued to be affected by ongoing violence in Rio de Janeiro state. On 6 January, a boy was killed and two girls injured during a military police operation in the Morro do Torre community in Queimados city. According to police, they were attacked by armed suspects and shot back (Globo Extra, 7 January 2022). However, according to witnesses, police were responsible for the shooting and opened fire against civilians in the community (Globo Extra, 7 January 2022). The episode sparked demonstrations against police violence in the area, with demonstrators setting a public bus on fire (O Dia, 7 January 2022).

Matthew Kirchman is the South America Researcher for Venezuela at ACLED. He is an M.A. candidate at Georgetown University's Walsh School of Foreign Service and holds a B.A. in Political Science and International Studies from New College of Florida. His research interests include the role of identity in radicalization and sub-state violence. He is fluent in English and Spanish and is based in Washington, D.C.