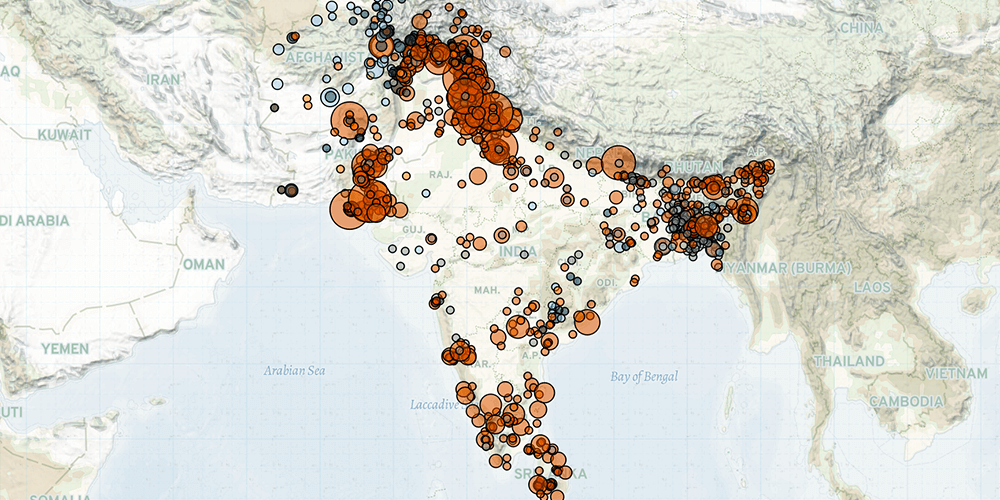 Over the past month, the Islamic State (IS) attacked Taliban forces and civilians in Afghanistan, amid ongoing clashes between the National Resistance Front (NRF) and the Taliban. Meanwhile, skirmishes between Taliban forces and neighboring state forces were reported along the borders with Turkmenistan, Pakistan, and Iran. In Pakistan, the Tehreek-i-Taliban Pakistan (TTP) renewed violent activity after its month-long ceasefire agreement with the government expired on 9 December. Meanwhile, Baloch separatists increasingly targeted Pakistani forces in Balochistan province. In India, security forces ramped up operations against militants in Jammu and Kashmir (J&K), while blaming Pakistan for carrying out a cross-border attack. Elsewhere in India, Naxal-Maoists targeted civilians and government officials. Lastly, local government elections in Pakistan and Bangladesh prompted violent clashes between political rivals and their supporters.

In Afghanistan, IS carried out attacks against the Taliban in Logar, Nangarhar, and Kunar provinces over the past month, claiming to kill and injure over a dozen Taliban members. The Taliban also attacked IS militants in urban areas like Kabul, Jalalabad, and Kandahar cities. In Kabul, Taliban forces killed an IS suicide bomber before he could detonate himself in front of the passport department, where large civilian crowds have been gathering to receive travel documents to flee the country (RFE/RL, 19 December 2021). Additionally, NRF and the Taliban clashed in the northeastern provinces of Baghlan, Kapisa, Parwan, and Laghman, as well as the western province of Badghis, over the past month – with clashes increasing over the past month compared to months prior.

Separately, violence erupted along Afghanistan’s borders with Pakistan, Iran, and Turkmenistan over the past month. Along the Pakistan border, the Pakistan military killed at least one Afghan civilian during shelling into Kunar province, prompting Taliban retaliatory fire and the deployment of Taliban forces to the border. Following the outbreak of violence, governments engaged in diplomatic meetings to resolve the issue along the long-contested border, formed by the Durand Line (VOA, 3 January 2022). ACLED records around a dozen such events along the Durand Line per year since 2018. Meanwhile, Turkmen soldiers reportedly killed an Afghan civilian in Jowzjan province, as Taliban and Turkmen forces exchanged fire along the Afghanistan-Turkmenistan border (TOLO News, 2 January 2022). Taliban foreign ministry officials later denied the incident took place (Khaama Press, 4 January 2022). This is the first violent event involving Turkmen forces in Afghanistan since the start of ACLED coverage. Clashes between the Taliban and Iranian forces were also reported in Nimruz province on 2 January, though further details remain unknown (Twitter @Natsecjeff, 2 January 2022). Skirmishes also took place in Nimruz province in early December 2021, with Iranian and Afghan authorities later claiming that violence was the result of a “misunderstanding” (Al Jazeera, 1 December 2021).

Meanwhile, attacks on civilians represent the majority of violent events in the country over the past month, as both the Taliban and unknown groups targeted civilians across 22 provinces. Similar to prior weeks, victims include former security officials. Taliban forces also reportedly beat up civilians for not joining congregational prayers or for playing music during weddings (Hasht e Subh, 2 January 2022; Twitter @mujahidandarabi, 6 January 2022). IS militants also continue to target civilians, killing several people across Kandahar and Kabul, including members of the Hazara ethnic group and Shiite Muslims. Additionally, IS militants killed a civilian in Farah city. This is the first report of an IS attack in Farah province in ACLED data.

Lastly, the Taliban imposed further restrictions on women over the past month, with a decree obliging women to be accompanied by a close male relative when traveling long distances on public transportation (Daily Sabah, 26 December 2021). The decree also dictates that vehicle owners should only provide transportation to women wearing “Islamic hijab” (Daily Sabah, 26 December 2021). The decree triggered a protest of over 100 women in Kabul city, which was dispersed by the Taliban (RFE/RL, 28 December 2021).

In Pakistan, the TTP resurfaced after a month-long ceasefire with the Pakistani government and resumed attacks on security forces and civilians in Khyber Pakhtunkhwa province over the past month. TTP militants targeted officers guarding polio vaccination teams in Tank, Kulachi, and Bannu districts, killing at least two police officers. The militant group conducts frequent attacks on polio teams, opposing polio campaigns as a “Western plot to sterilize children” (Gandhara, 12 December 2021). In Bajaur tribal district, at least three people were killed in a suspected TTP suicide attack on an Awami National Party (ANP) vehicle. The ANP had previously criticized the government’s move to release TTP prisoners, which was a part of the ceasefire agreement (Mashriq TV, 10 December 2021).

Meanwhile, at least seven Pakistani troops were killed during clashes with TTP militants in Khyber Pakhtunkhwa province, including a raid on a TTP hideout near the Afghan border in Mir Ali town. Last week, security forces intensified operations against the militant group, as the Pakistani army announced that talks with the TTP had been suspended over a deadlock (Daily Pakistan, 6 January 2022). In November 2021, the Pakistani government engaged TTP militants in peace talks with the help of Afghanistan’s ruling Taliban, leading to a one-month ceasefire (Al Jazeera, 10 December 2021). In early December, the TTP ended the ceasefire, accusing the government of breaching the terms of the agreement (Voice of America, 31 December 2021).

Elsewhere in Pakistan, Baloch separatist violence increased over the past month, particularly in Kech and Quetta districts in Balochistan province. Baloch Raaji Ajoi e Sangar (BRAS) claimed responsibility for attacking and capturing a Pakistan army post near Tump town in Kech district and killing 11 soldiers. Baloch separatists killed a further nine security personnel across five separate attacks on both security checkposts and personnel in the district. In Quetta city, a remote explosion triggered by suspected Baloch separatists led to the deaths of at least four people and wounded at least 15 others. The blast occurred at the main gate of Science College as participants of a public meeting were leaving the venue (Anadolu Agency, 30 December 2021).

In India, operations against militants in J&K increased over the past month, leading to armed clashes. Security forces exchanged fire with Jaish-e-Mohammad (JeM), Lashkar-e-Taiba (LeT), and Hizb-ul-Mujahideen (HM) militants during operations, killing tens of militants. The increased number of armed clashes follows a spike in militant attacks on civilians in J&K during the final months of 2021, including the targeting of non-Kashmiris and members of the Hindu and Sikh minorities in the Muslim-majority region.

In another development in J&K, the Indian army accused Pakistan of attempting to carry out an attack with alleged Border Action Team (BAT) forces near the Line of Control (LoC) in Kupwara district last week (The Daily Excelsior, 3 January 2021). An alleged BAT officer was killed by Indian security forces while attempting to reach the Indian border. India and Pakistan committed to a ceasefire agreement on 25 February 2021, which has since limited cross-border violence between their security forces (The Diplomat, 25 February 2021).

In the Red Corridor in India, Naxal-Maoist rebels continued to be active over the past month, mostly targeting civilians. In Jharkhand state, Naxal-Maoists attacked a former legislator from the ruling Bharatiya Janata Party (BJP), killing two of his guards. The rebels also targeted and killed 14 other civilians, including at least three government officials during attacks in Chhattisgarh, Jharkhand, Odisha, and Bihar states. On 27 December, at least six Naxal-Maoists were killed during an operation by security forces in the Chhattisgarh-Telangana border area. The operation took place after Naxal-Maoists abducted and killed a former village official in Mulugu district. Last week, the rebels killed at least eight civilians in four targeted attacks in Chhattisgarh state. Increased Naxal-Maoist activity has contributed to an increase of 122% in violence in Chhattisgarh state over the past week, compared to the month prior (for more, see ACLED’s Early Warning Research Hub).

Lastly, deadly election-related violence broke out in Pakistan and Bangladesh over the past month. Deadly violence erupted in Pakistan’s Khyber Pakhtunkhwa province as local government elections concluded on 19 December in 17 districts, amid accusations of election rigging by opposition parties (Gandhara, 19 December 2021). Аt least seven people were killed and 10 polling stations were set on fire and vandalized during election-related violence. Local elections in the province’s remaining 18 districts are slated for 16 January (Gandhara, 19 December 2021). In Bangladesh, election-related violence broke out during and after voting in the fourth and fifth phases of local elections on 26 December and 5 January, leaving at least 18 people dead and hundreds injured. Election-related violence contributed to a 75% spike in violence in the country over the past month relative to the year prior (for more, see ACLED’s Early Warning Research Hub). The majority of violence involved clashes between members of the ruling party Awami League (AL) and independent opposition candidates, similar to the previous three election phases. In Bogra district, Border Guards Bangladesh killed four people when they opened fire on rioting AL supporters on 5 January. The clash comes after election officials decided not to announce the results of elections in Gabtali upazila (Dhaka Tribune, 5 January 2022).