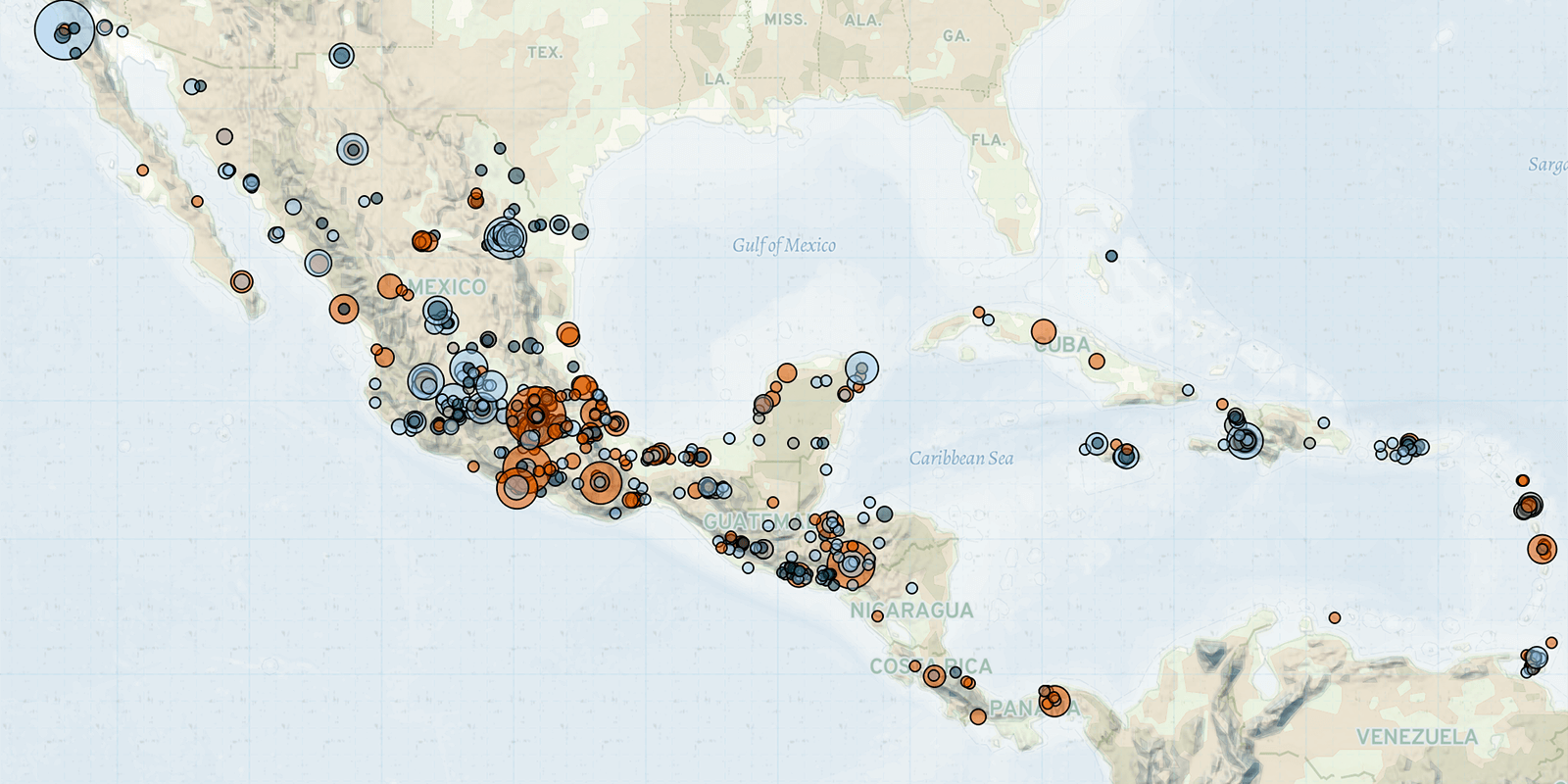 Last week in Mexico, Central America, and the Caribbean, violence increased amid gang-related attacks and targeted attacks against Indigenous communities in Mexico and Honduras. In Mexico, gang violence increased in Michoacan and San Luis Potosi states, with the Jalisco New Generation Cartel (CJNG) carrying out several attacks using drones charged with explosives in Michoacan state. Elsewhere, in Chiapas state, the ongoing conflict between the Santa Martha and the Aldama Indigenous communities intensified. In Honduras, gunmen shot and killed a leader of the Lenca Indigenous community. Meanwhile, in Cuba, relatives of prisoners arrested during the anti-government demonstrations of 11 July 2021 protested against their ongoing criminal trials. In Guadeloupe, demonstrations against COVID-19 related measures increased last week.

In Mexico, the CJNG escalated its offensive in Tepalcatepec municipality, driving a 130% increase in violence in Michoacan state last week compared to the month prior (see ACLED’s Early Warning Research Hub for more). Notably, the CJNG attacked the communities of Bejuco, Romera, and Plaza Vieja with explosive-laden drones. Members of local self-defense groups, as well as military and national guard officers engaged in clashes with members of the CJNG to repel the attacks in Plaza Vieja and La Romera. During the fighting, a self-defense militiaman was injured while at least 20 houses were destroyed, forcing people to flee the villages (El Universal, 11 January 2022). The use of drones by the CJNG has become part of their strategy to intimidate communities and to seize control of municipalities of the Tierra Caliente region for the control of drug trafficking routes (El Proceso, 18 September 2021). Last week’s offensive follows similar attacks recorded only a month before in Michoacan. While the use of drones has resulted in relatively low levels of casualties reported thus far, it has led to the displacement of thousands of residents in the region (InSight Crime, 14 January 2022; Infobae, 12 January 2022).

Violence also spiked last week in San Luis Potosi state amid increased gang-related activity. The majority of gang violence occurred in the state’s capital, San Luis Potosi, including the discovery of four bodies that were left with messages signed by criminal groups. Though such attacks are not usually claimed by a particular group, the state of San Luis de Potosi is considered a strategic location for criminal groups that seek to control drug trafficking routes that connect to the north of the country (Infobae, 23 November 2021). According to authorities, the Gulf Cartel and the CJNG operate in this state (Infobae, 13 January 2022). Violence thus far in January 2022 already surpasses violence reported during the entirety of December 2021, per ACLED data.

Meanwhile, in Chiapas state, armed members of the Santa Martha Indigenous community carried out several attacks against Tzotsil Indigenous residents in Aldama municipality between 9 and 10 January, leaving one man dead and another injured. Following the attacks, residents of the Santa Martha community in Chenalho municipality reported an attack by suspected armed men from Aldama municipality that left three people injured. These attacks contributed to a 357% increase in violence in Chiapas state last week compared to the month prior (see ACLED’s Early Warning Research Hub for more). These attacks relate to a decades-long land conflict between residents of Chenalho and Aldama municipalities. The latest violence has been prompted by a failure to redistribute land according to an agreement set in November 2020 (Expansion Politica, 11 January 2022).

In Honduras, unidentified gunmen shot and killed a Lenca Indigenous leader and local journalist on 9 January in San Marcos de Calquin municipality. Though the perpetrators of this attack remain unknown, the victim had reported previous threats against his life made by local authorities for his Indigenous rights activism (Swissinfo, 9 January 2022). Members of the Lenca Indigenous groups have denounced the operation of extractive companies and the execution of infrastructure projects that undermine environmental conditions (Protection International, 6 March 2021). Moreover, environmental activists accuse the government of supporting the interests of mining and construction companies, granting concessions for mining and energy projects in Indigenous territories (Pasos de Animal Grande, 2 October 2021).

In Cuba, relatives of detained 11 July anti-government demonstrators protested last week, as the courts held collective trials for more than 57 demonstrators (AP, 11 January 2022). Relatives protested in Camaguey and Santa Clara against the trials, denouncing disproportionate sentences that have been handed to demonstrators; with these disproportionate sentences, the government seeks to dissuade further demonstrations (DW, 17 December 2022). In Santa Clara, people gathered outside the tribunals for five consecutive days, from 10 to 14 January.  On 12 January, police officers disbanded the protesters, while also arresting the coordinator of the United Anti-Totalitarian Front (FANTU). Similarly, law enforcement officers arrested four activists on their way to the tribunals in Holguin where they were going to show support for the detainees during their trials. During the trials, which started in December 2021, demonstrators have been accused of sedition and disruption of public order, for which they face up to 30 years in prison (BBC, 29 December 2021). During the anti-government demonstrations of 11 and 12 July 2021, local human rights organizations report the arrests of around 1,300 participants, including activists and regular demonstrators with no political affiliations (New York Times, 14 January 2022).

In Guadeloupe, riot events against COVID-19 related measures increased last week as people continue to reject the use of health passes and mandatory vaccinations for caregivers and health workers. Rioters barricaded roads between 10 to 13 January in Bas-Terre and Point-Pietre districts. During one demonstration in Bas-Terre, participants burned a police patrol and one civilian was injured after having suffered a car accident due to the barricades. Demonstration events in Guadeloupe tripled last week compared to the week prior. Demonstrations against these measures started in November 2021, with demands having since enlarged to include greater employment opportunities and improvements to socioeconomic conditions (RFI, 30 November 2021). The local government is currently seeking to reach agreements that include the re-training of health workers to find other positions that do not require them to be vaccinated, as 600 health workers remain unvaccinated (TV5 Monde, 13 January 2022).