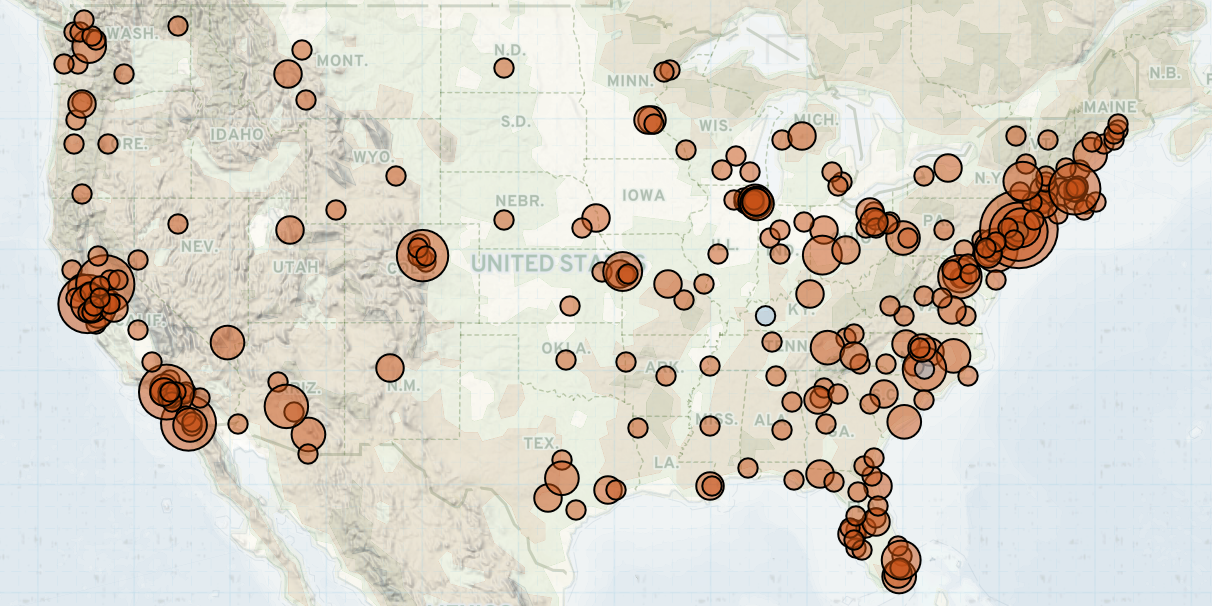 The spike in labor-related demonstrations was largely the result of dozens of demonstrations organized by National Nurses United (NNU). These demonstrations called for improved workplace protections and staffing amid the coronavirus pandemic and took place across 10 states and Washington, DC. This marks the most active week for NNU since ACLED coverage began in January 2020. In California, nurses demonstrated against a statewide emergency order that allows healthcare workers who test positive for COVID-19, yet are asymptomatic, to continue working without a quarantine period (Los Angeles Times, 12 January 2022). Last week also marked the highest number of demonstrations involving health workers since the week of 21 August 2021, when healthcare workers had demonstrated against recently announced state vaccination mandates for the healthcare sector.

Demonstrations against pandemic-related mandates last week continued at levels similar to recent weeks. Anti-mandate demonstration events were vastly outnumbered by demonstrations calling for increased protective measures in schools and places of work, as the Omicron variant continues to surge across the United States (New York Times, 10 January 2022). Relatedly, on 12 January, a man was arrested in Del City, Oklahoma, for threatening to blow up the Oklahoma City Occupational Safety and Health Administration (OSHA) building in opposition to COVID-19 mask and vaccine mandates (KOCO, 14 January 2022).

In Fayetteville, North Carolina, an off-duty police lieutenant fatally shot Jason Walker, an unarmed Black pedestrian, on 8 January. Witnesses claim that Walker jumped onto the hood of the officer’s truck, prompting the officer to exit his vehicle and fire three shots at Walker (WRAL, 14 January 2022). Demonstrations against the shooting were reported in Fayetteville every day last week (Fayetteville Observer, 14 January 2022).

On 13 January, FBI officials arrested Stewart Rhodes, the founder of the Oath Keepers, for his participation in the Capitol riot. Rhodes was taken into custody in Little Elm, Texas, and faces several charges, including seditious conspiracy. Ten others, including at least one other member of the Oath Keepers, were also charged with committing sedition — marking the first instance of the charge being used against those who rioted at the Capitol (CNN, 13 January 2022; Washington Post, 14 January 2022) (for more on the Oath Keepers, see ACLED’s Oath Keepers actor profile). An additional, though unrelated, arrest occurred on 12 January, when a woman was arrested outside the Capitol Police headquarters in Washington, DC. Police said the woman initiated a conversation with them, claiming that she had driven from Michigan in order to share “information she had about January 6, 2021” (NBC, 14 January 2022). The woman was taken into custody after police noticed several guns in her car, though they noted there was no evidence she was planning an attack.

Reported militia and militant social movement activity last week remained relatively stable compared to the week prior. On 11 January, members of Patriots for America conducted a patrol along the US-Mexico border in southern Texas, during which they encountered three Nicaraguan migrants who they claim to have turned over to a local sheriff’s department. Meanwhile, Veterans on Patrol carried out their first reported patrol in the new year along the US-Mexico border in Arizona. Elsewhere in Arizona, the Yavapai County Preparedness Team (YCPT) held recruitment meetings in Chino Valley on 8 January and in Surprise on 11 January.

Members of the Proud Boys were also active last week, engaging in multiple demonstrations. On 8 January, they staged a ‘Never Stop Fighting’ rally alongside members of People’s Rights outside the Oregon State Capitol in Salem. The groups showed support for Proud Boys who were arrested in connection with the Capitol riot, and called for justice for Ashli Babbitt, who was shot by Capitol Police as she stormed the building. Proud Boys also rallied alongside Patriot Prayer members on 12 January outside the Department of Health in Tumwater, Washington. They rallied against an unsubstantiated internet rumor of a plan to forcibly quarantine people who refuse the coronavirus vaccine. State Representative Jim Walsh (R) attended this rally, marking at least the third instance where Rep. Walsh has rallied alongside Proud Boys.