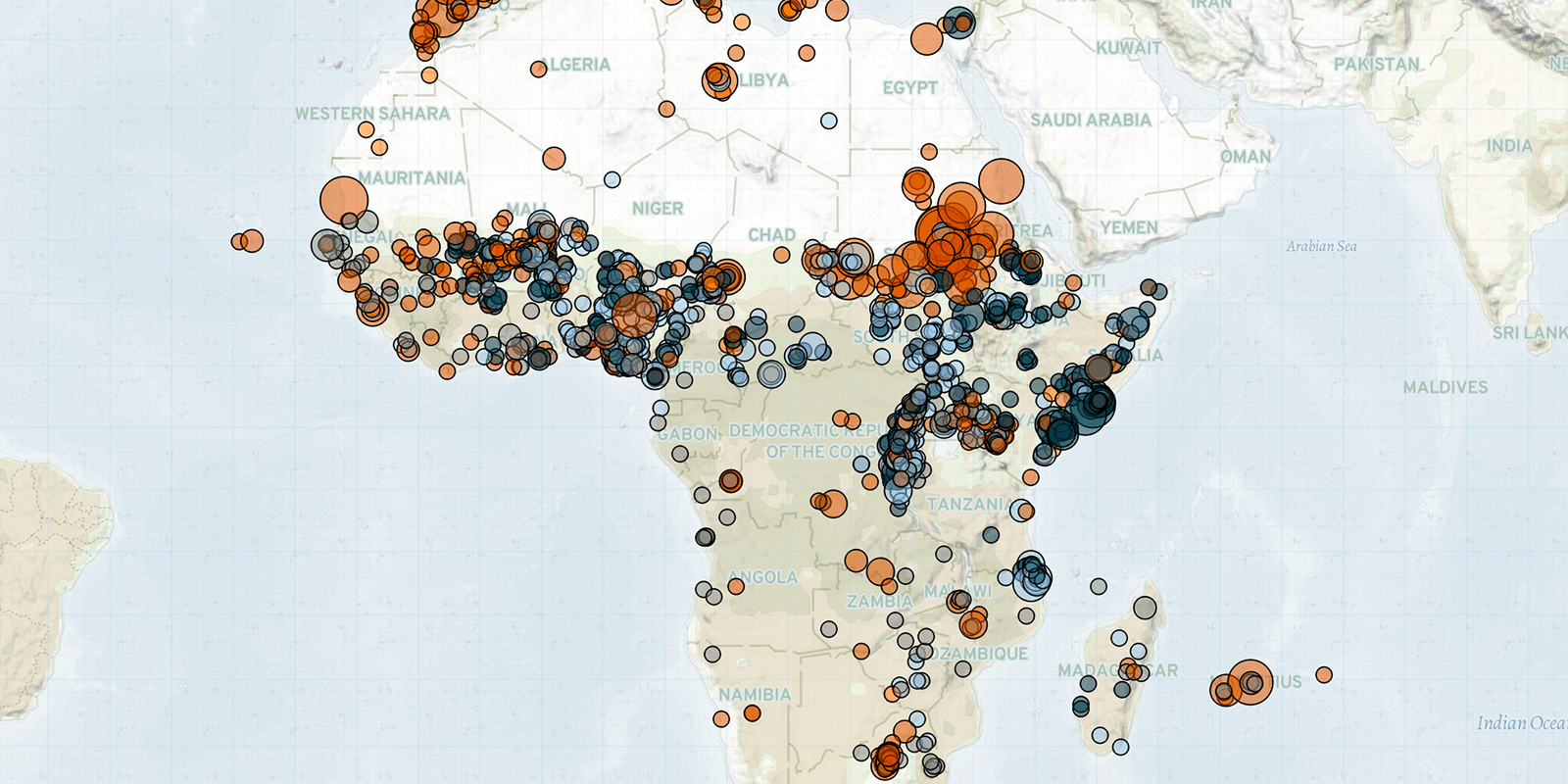 In Burkina Faso, French and Burkinabe forces airstrikes killed scores of presumed Islamist militants in the Sahel region. However, suspected JNIM militants attacked localities in the Center-North region, leading to clashes with local defense militias. JNIM militants also destroyed telecommunications antennas with explosives in the Boucle du Mouhoun, Sahel, North and Center-North regions, with similar events in Mali and Niger. Violence in Center-North and North regions are both common and highly volatile; they are both considered areas of ‘extreme risk’ by ACLED’s Volatility and Risk Predictability Index. These trends contribute to the 42% increase in violence in Burkina Faso over the past month relative to the past year that is flagged by ACLED’s Conflict Change Map, which first warned of an increase in violence in the country earlier this month. In Niger, Islamist militants abducted 13 people in the Diffa region. Further, JNIM attacked a joint security force in Kobadje, Tillaberi region, showing militancy shifting closer towards the capital.

In Mali, Malian army operations were concentrated in the Mopti region, while clashes with Islamist militants in the Koulikoro region contributed to a 220% increase in violence in this area last week relative to the past month, as flagged by ACLED’s Subnational Surge Tracker. Islamist militants clashed against one another when ISWAP Greater Sahara attacked JNIM militants at a market in NDaki, in the ​​Tombouctou region. Further, a notable Malian army attack in the Koulikoro region killed more than a dozen people, including Mauritanian merchants and Malian Fulani pastoralists.

In Libya, the Islamic State carried out its first attack since September. Militants targeted Libyan military forces affiliated with Khalifa Haftar using an IED explosion in the Murzuq district. Further, an unidentified armed group invaded and closed down the airport near Ghat, preventing the arrival of the interim prime minister.

In Nigeria, political disorder peaked this week in Kaduna state where armed groups carried out violence against civilians and clashed with military forces. While the events were higher in Kaduna, fatalities spiked in Niger state following an armed group ambush on police in Mariga local government area (LGA), resulting in scores of fatalities. Nigerian forces repelled an attack by ISWAP Lake Chad faction in Borno state, while some ​​Civilian Joint Task Force (CJTF) were killed by an IED planted by ISWAP militants near Dikwa. Finally, ISWAP released a video showing the recruitment of about 150 child soldiers (HumAngle, 19 January 2022).

In neighboring Cameroon, military forces killed an Ambazonian separatist leader, General Ebube, and two of his lieutenants during a security operation in the Northwest region. Violence continued to rise by 57% last week relative to the past month according to ACLED’s Conflict Change Map, which first warned of a surge in violence in the country earlier this month.

In the Democratic Republic of Congo, the Congolese government extended the ‘State of Siege’ operation in North Kivu and Ituri provinces once again (Journal de Kinshasa, 21 January 2022). Following deadly attacks on civilians in Ituri province, the Congolese army (FARDC) and UN peacekeepers (MONUSCO) fought against the Cooperative for Development of Congo (CODECO) rebels in Djugu territory, resulting in several fatalities. Moreover, the CODECO and the Patriotic and Integrationist Forces of Congo (FPIC) fighters killed and injured several Catholic Christian civilians during an evangelical congregation in Irumu territory. Violence in Ituri is both common and highly volatile; it is considered an area of ‘extreme risk’ by ACLED’s Volatility and Risk Predictability Index. Elsewhere, in South Kivu, the Burundian military forces and allies clashed with the Resistance to the Rule of Law in Burundi (RED-Tabara) and Mayi Mayi Ilunga fighters in Uvira territory, with the Burundian army claiming they regained control of the area. According to local sources, Burundian troops have entered into South-Kivu since December 2021, chasing RED-Tabara rebels. Also in Uvira, a coalition of Mayi Mayi and the National Forces of Liberation (FNL) exchanged fire against the FARDC on the hills overlooking Kavimvira during an attempted attack on Uvira town.

In Kenya, in response to the recent increase of Al Shabaab attacks in Lamu county, security forces launched an operation in the Bodhei area, killing more than a dozen suspected Al Shabaab militants. These trends contributed to a 95% increase in violence in Kenya last month relative to the past year that is flagged by ACLED’s Conflict Change Map, which first warned of a surge in violence in the country earlier this month. In neighboring Somalia, security force operations against Al Shabaab in the central and southern areas left several militants dead. As the parliamentary elections now scheduled for 25 February draw closer (Al Jazeera, 9 January 2022), Al Shabaab remote attacks targeting government officials continued. In the capital Mogadishu,  a suicide attack against a government spokesman left the victim seriously injured. Another suicide bombing at a tea shop near a military base in the Somali capital two days later resulted in at least four fatalities among civilians and soldiers.

​​In South Sudan, the Kitgweng and Agwelek factions of the SPLM-IO signed separate agreements with the government at the same ceremony following peace negotiations. The first agreement integrates Kitgweng forces into the army (at the expense of SPLM-IO loyalists), and the second includes vague provisions on addressing the conflict between elements of the Shilluk/Chollo and the Padang Dinka in Upper Nile state (VOA, 17 Janyary 2022). Meanwhile, continued low-level violence involving IO forces was reported over the past week in Jur River county that left several people, including a local chief, dead.

Lastly, in Sudan, military forces repelled attacks by suspected Rizeigat militias in the Adekoung area of West Darfur state, contributing to a 100% increase in violence in the state last week relative to the month prior, as flagged by ACLED’s Subnational Surge Tracker. Elsewhere, in North Darfur state, gunmen killed and injured several displaced people and residents of the Zamzam camp near Foul Abyad after they came to retrieve their stolen sheep. Two other people were also killed when Rapid Support Forces (RSF) shot at a vehicle headed towards the camp. Demonstrations erupted following the violence to demand justice (Radio Dabanga, 21 January 2022). Last week, at least 8 more people were killed during ongoing demonstrations against the military rule, bringing the total number of fatalities in anti-coup demonstrations to over 58. ACLED’s Conflict Change Map warned of a surge in violence in Sudan earlier this month.