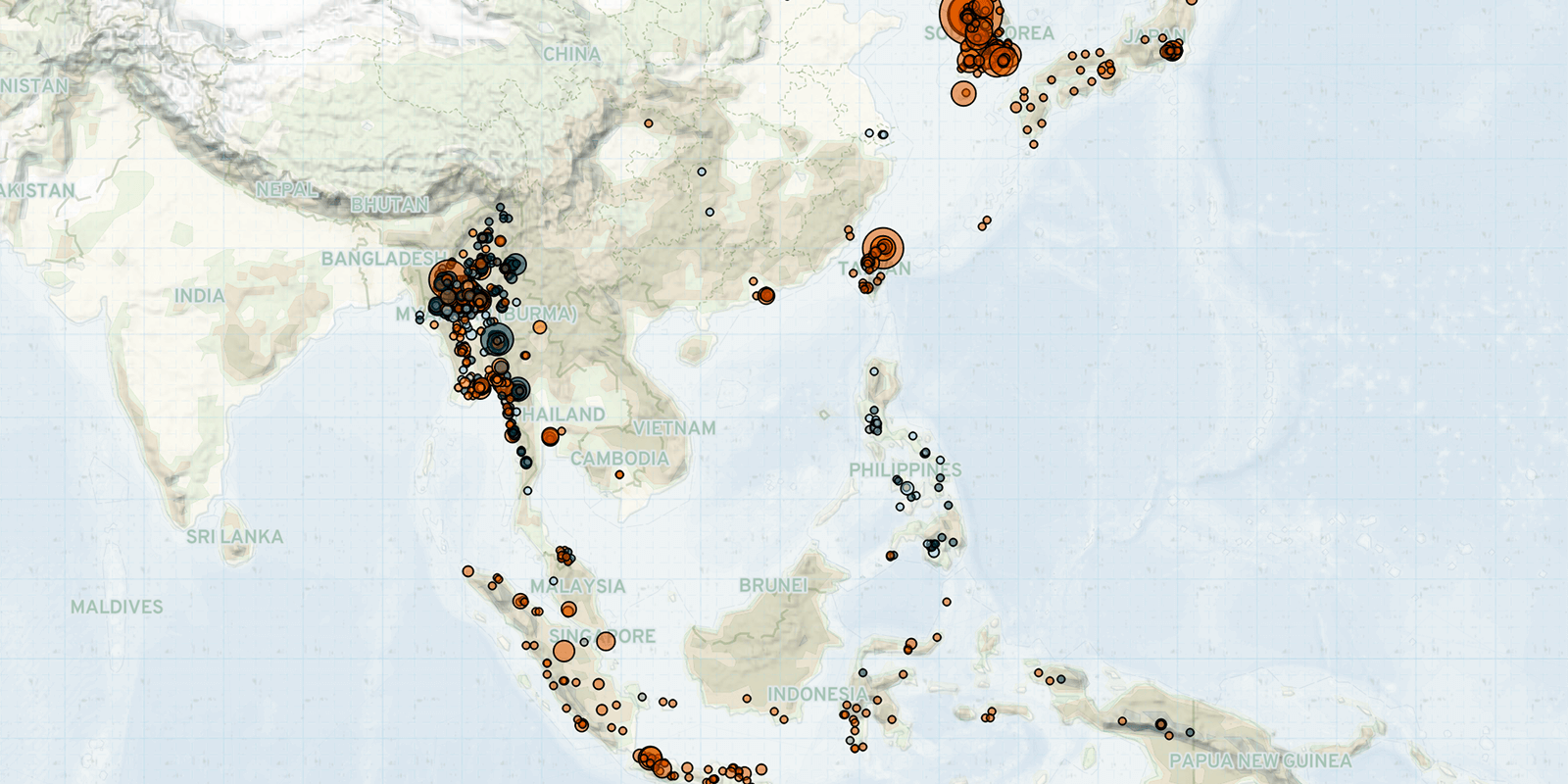 Last week in East and Southeast Asia, the Myanmar military employed airstrikes across a number of regions, amid ongoing clashes with ethnic armed organizations (EAOs) and other resistance groups. In Sagaing region, the All Burma Students Democratic Front (ABSDF) was reportedly involved in its first battle with military forces since the coup. North Korea launched two new ballistic missiles. In the Philippines, state forces killed four Dawlah Islamiyah – Hassan Group militants in a pursuit operation in Cotabato. In Indonesia, Afghan refugees protested in several locations across the country to demand resettlement in third countries. Lastly, in Thailand, there was an uptick in protest events calling for action to tackle rising living costs.

In Myanmar, the military continued its offensive against EAOs and other resistance groups across the country last week, contributing to the 65% increase in violence in the country over the past month relative to the past year, as flagged by ACLED’s Conflict Change Map. ACLED’s Emerging Actor Tracker flagged an increase in emerging actors in Myanmar earlier this month as local defense forces continue to form across the country in response to the ongoing military violence. The military deployed military aircraft during operations in Chin, Kayah, and Kayin states, as well as in Sagaing region, with reports of civilian casualties. Notably, in Kayah state, the military launched airstrikes in Hpruso township on 16 January and Demoso township on 17 January, killing six civilians (Myanmar Now, 17 January 2022). On 19 January, the Chin National Front (CNF), Karen National Union (KNU), and Karenni National Progressive Party (KNPP) issued a joint statement urging the international community to enforce a military no-fly zone in Myanmar. The armed wings of the three organizations have been engaged in heavy fighting with military forces since the coup, with increased military use of airstrikes in their respective states in recent months. Ten states and regions out of 15 administrative territories in Myanmar are considered areas of ‘extreme risk’ by ACLED’s Volatility and Risk Predictability Index, where violence is both common and highly volatile.

In other developments, the ABSDF and People’s Defense Force – Katha intercepted military vessels in Sagaing region last week. The incident marks the first reported clash involving the ABSDF since 2016. The ABSDF was established by student activists during the 1988 democratic uprising and had fought alongside other EAOs in past decades, before becoming one of the signatories of the Nationwide Ceasefire Agreement initiated by the previous quasi-civilian government in 2015 (Burma News International, 19 January 2022).

Meanwhile, the military announced on 21 January that veteran pro-democracy activist U Kyaw Min Yu (better known as Ko Jimmy) and a National League for Democracy (NLD) elected member of parliament, U Phyo Zeyar Thaw, were sentenced to death for allegedly masterminding guerilla attacks against state forces. They were both accused of having links with the National Unity Government (NUG) and People’s Defense Force (PDF), which were declared as “terrorist” organizations by the junta last year (Irrawaddy, 10 May 2021). According to the Assistance Association for Political Prisoners (AAPP), as of 24 January, 82 people have been sentenced to death under the military regime since the military takeover (AAPP, 24 January 2022).

On 17 January, North Korea test-fired two short-range ballistic missiles from Pyongyang into waters off the coast of Japan (BBC, 17 January 2022). This is the fourth missile test by North Korea since the beginning of the year. Experts argue that North Korea may have deliberately timed the tests ahead of upcoming presidential elections in South Korea, scheduled for 9 March, and US midterm elections on 8 November, to gain political leverage (AP, 18 January 2022).

Last week in the Philippines, four Dawlah Islamiyah – Hassan Group militants were killed in a firefight with the military. This stems from the pursuit operations launched by state forces against the perpetrators of a bombing attack on a bus in Cotabato on 11 January. While initially attributing the bombing, which led to the death of a five-year-old child, to Al-Khobar, the military has since announced that the attack was carried out by the Hassan Group (Philippine News Agency, 15 January 2022). Among those killed in the pursuit operations was Norodin Hassan (alias: Andot) who reportedly served as the Hassan Group’s head of military affairs (Rappler, 17 January 2022). The clash between state forces and rebels contributed to a 62% increase in violence in the country last week relative to the month prior that is flagged by ACLED’s Conflict Change Map.

Last week in Indonesia, there was an increase in the number of protest events held by Afghan refugees demanding speedy resettlement in third countries. In Pekanbaru, police intervened and dispersed a protest held outside of the office of the UN High Commissioner for Refugees (UNHCR). The protest follows the suicide of a refugee on 15 January (Detik, 17 January 2022). Since 2016, at least 14 Afghan refugees have died by suicide in Indonesia (Al Jazeera, 3 December 2021). Indonesia is not a signatory to the Refugee Convention and does not officially allow refugees to stay permanently in the country, nor does it allow refugees to work or access education (Al Jazeera, 3 December 2021). More than half of the 13,000 refugees and asylum seekers currently based in Indonesia are Afghan nationals (ABC, 9 September 2021). Following the Taliban takeover of Afghanistan in August 2021, the number of protest events held by Afghan refugees has increased in Indonesia. Some protesters have taken extreme measures during the demonstrations, including setting themselves on fire (Benar News, 30 November 2021).

Also, in Indonesia, hundreds of Papuan students held a protest in Dekai district, Yahukimo regency, Papua province, demanding the military leave their school (Suara Papua, 20 January 2022). In recent months, local authorities have allowed the military to use three schools in Yahukimo regency as security posts, announcing that this is needed due to an increase in the activity of separatist rebels in the region (Suara Papua, 20 January 2022).

Lastly, in Thailand, the number of protest events increased last week. Most protests call for the government to implement measures to alleviate the financial hardship due to the rise in living cost nationwide during the coronavirus pandemic (Bangkok Post, 18 Jan 2022).