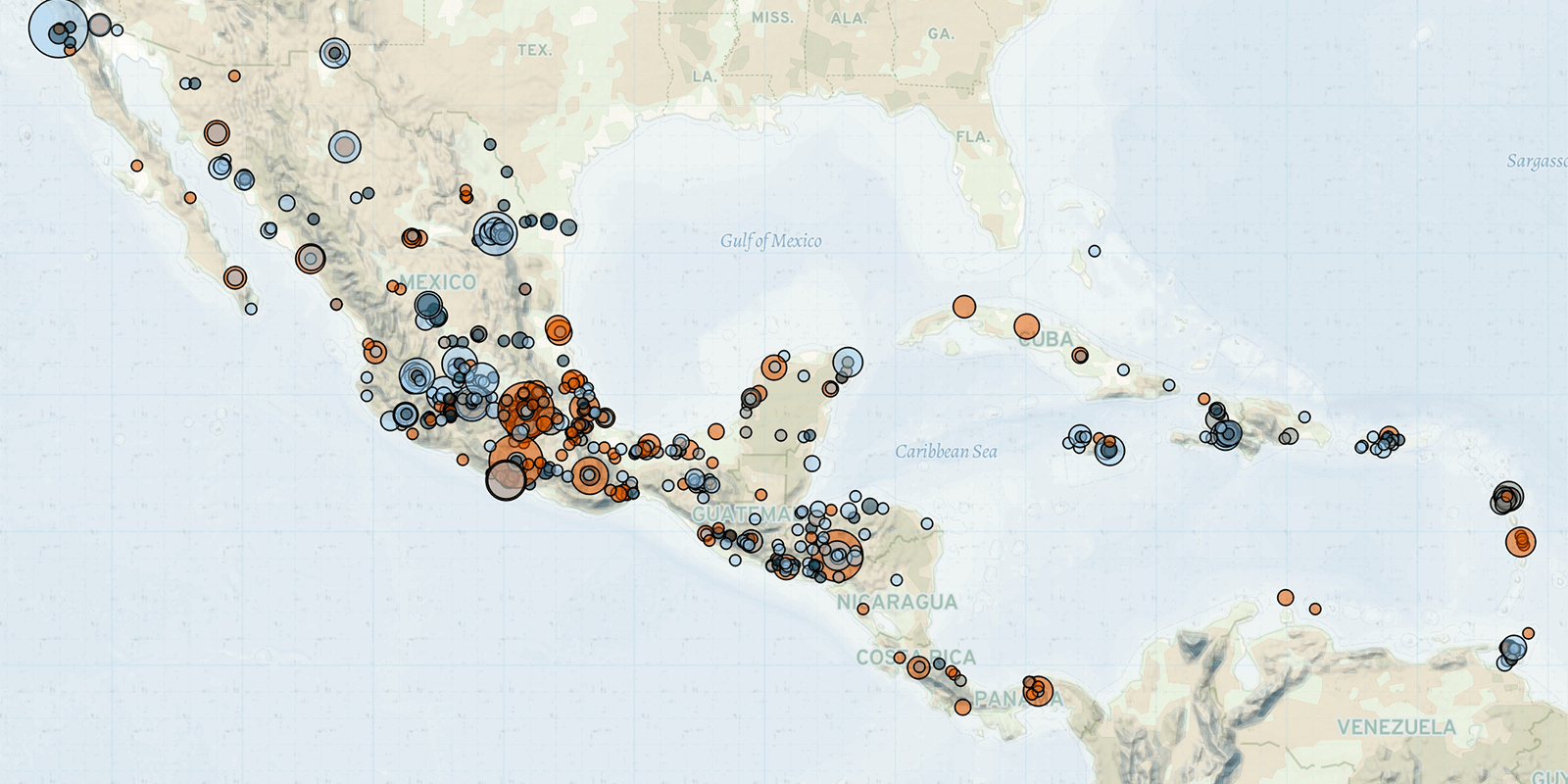 Last week in Mexico, Central America, and the Caribbean, violence remained high amid clashes between migrants and state forces, and gang-related attacks in several countries. In Guatemala, a caravan of migrants from Honduras and Nicaragua turned violent as migrants clashed with police and military officers. Meanwhile, migrants demonstrated in Mexico’s Chiapas state, demanding permits to move within the country on their way to the United States. Also in Mexico, gunmen attacked two journalists, killing one and seriously injuring the other in separate attacks. In Haiti, amid police operations in Croix-des-Bouquets district to fight gang violence, members of the 400 Mawozo Gang killed a police commissioner and two members of his family. In Honduras and Trinidad and Tobago, violence increased last week with gang attacks against civilians. In El Salvador, people protested against Nayib Bukele’s government, following its refusal to commemorate the anniversary of the peace accord of 1992 on 16 January. In Guadeloupe and Trinidad and Tobago, riots related to COVID-19 measures continued last week.

In Guatemala, migrants clashed with police and military officers as they attempted to cross the border into Izabal department from Honduras, contributing to a 135% increase in violence in Guatemala last week relative to the past month that is flagged by ACLED’s Conflict Change Map. Police used tear gas to disperse the migrants, who threw stones and objects, injuring 15 officers. The clash started after Guatemalan military and police officers prevented migrants from crossing the border, claiming that some of them did not have the documents required to do so, such as an identity document, vaccination certificate, or a negative COVID-19 test (AP, 16 January 2022). The caravan of more than 500 migrants, mostly from Honduras and Nicaragua, started out from San Pedro Sula in Honduras with the aim of crossing into the US, fleeing from criminal violence and a lack of job opportunities (Forbes, 15 January 2022).

Meanwhile, at the southern border of Mexico, hundreds of migrants protested in Tapachula, Chiapas, on 20 and 21 January, demanding authorities speed up the issue of documents that will allow them to move across the country on their way to the northern border (EFE, 20 January 2022). On 21 January, police officers detained more than 200 migrants on a road that connects Tapachula municipality to Ciudad Obregon. Local activists accuse police of beating migrants during the arrest (DW, 21 January 2022). Violence in Chiapas is both common and highly volatile; it is considered an area of ‘extreme risk’ by ACLED’s Volatility and Risk Predictability Index. In 2021, Mexican authorities received around 130,000 requests for asylum, which tripled the number of requests recorded in 2020, most of them made by Haitian and Honduran migrants (El Economista, 3 January 2022).

Elsewhere in Mexico, armed groups continued to target journalists during attacks last week in Baja California and Yucatan states. Armed assailants shot and killed a photojournalist near his house in Tijuana on 17 January. The victim worked for local media outlets, covering events related to insecurity, and had reported threats against his life by criminal groups (EFE, 21 January 2022). On the following day, an armed man broke into the house of another journalist and injured him in Merida. These attacks triggered protests in Tijuana, Mexicali, and Ensenada, as reporters and relatives of journalists demand justice and investigations. In Mexico, journalists are often threatened by state authorities and criminal organizations for their reports on corruption schemes and criminal dynamics (Animal Politico, 24 August 2021). Most of these attacks remain unpunished as authorities fail to investigate these cases (El Pais, 8 January 2022). Thus far in January, ACLED records the highest number of attacks against journalists since October 2021.

In Haiti, violence increased in Croix-des-Bouquets district last week, following several gang attacks. Members of the 400 Mawozo gang shot at the vehicle of a police commissioner on 19 February, killing him, as well as his wife and daughter. Between 19 and 20 January, unidentified gunmen carried out several other attacks, including the killing of a former police officer and an attack that left a judge injured. These attacks coincide with a police operation targeting gangs operating in the Cité Doudoune neighborhood, in which several gang members and allies of the 400 Mawozo gang were killed and four others were arrested.  This intervention was part of ongoing police operations in Croix-des-Bouquets district, which is controlled by the 400 Mawozo gang through kidnappings and extortions (Rezo Nodwes, 18 January 2022; Al Jazeera, 18 October 2021).

In Honduras, violence increased last week amid gang attacks targeting public transport drivers, resulting in a 42% increase in violence in the country last week relative to the past month, flagged by ACLED’s Conflict Change Map. Attacks against taxi and bus drivers were recorded in four departments, including in Gracias a Dios. Violence in Gracias a Dios has been neither common nor volatile; however, last week it became more volatile, resulting in a shift from a place of low risk’ to being considered an area of growing risk’ by ACLED’s Volatility and Risk Predictability Index. Drivers have denounced constant extortions by gangs which demand payments – known as ‘war taxes’ – as a part of their sources of revenue to finance operations (HCH, 6 September 2021). Thus far in January, ACLED records an increase in attacks against taxi and bus drivers compared to the whole month of December 2021.

Meanwhile, in Trinidad and Tobago, violence remained high last week with attacks by unidentified gunmen against civilians. In the Siparia department, armed suspects killed a man and injured another in a drive-by shooting. The attack is allegedly related to the ongoing drug-trafficking disputes in the area, which have resulted in other attacks in recent weeks (Trinidad and Tobago Guardian, 6 January 2022). Violence in Siparia has been neither common nor volatile; however, last week it became more volatile, resulting in a shift from a place of low risk’ to being considered an area of growing risk’ by ACLED’s Volatility and Risk Predictability Index. According to police, security operations in the country are being focused on the fight against gangs as gang violence contributed to an increase in violence in 2021 compared to 2020 (Newsday, 14 January 2022; Daily Express, 1 January 2022)

In El Salvador, around 2,000 people staged an anti-government protest in San Salvador to coincide with the 30th anniversary of the 16 January 1992 peace accord that put an end to the 1980-1992 civil war (Swiss Info, 16 January 2022). The protest comes in response to congress’ decision to repeal legislation that designated 16 January as a national holiday. Politicians in favor of the repeal argue that the day should commemorate the victims of the conflict without any official act (VOA, 11 January 2022). Protesters included former military officers, members of the Farabundo Marti National Liberation Front (FMLN), judges, and members of the LGBT community, alongside other sectors of civil society who demand respect for the democratic history of the country (EFE, 16 January 2022). Though the march remained peaceful, local media reported that police set more than 18 checkpoints around the city of San Salvador between 15 and 16 January to prevent the arrival of protesters into the city (El Faro,17 January 2022). President Bukele has referred to the peace accord as a “farce” promoted by political elites that favored corruption (BBC, 14 January 2022).

In Guadeloupe, union-led riots continued last week, in opposition to the mandatory use of health passes to access public spaces, alongside mandatory vaccinations for health workers and caregivers. Rioters barricaded roads and clashed with police officers in Basse-Terre and Point-Pietre districts between 19 to 21 January.  ACLED’s Conflict Change Map warned of an increase in violence in Guadeloupe earlier this month. The violence from these riots last week contributed to a 129% increase in violence in the country relative to the past month; the result is a 362% increase in violence over the past month relative to the past year in Guadeloupe. The riots occur as Lyannaj Kont Pwofitasyon — a trade union umbrella organization that has led the ongoing riots since they started in November 2021 — commemorated its anniversary on 20 January  (Le Monde, 14 November 2021). The organization had called for labor strikes, seeking to exert pressure on authorities in ongoing negotiations regarding pandemic measures and other social issues (Franceinfo, 19 January 2022).

Similarly, in Trinidad and Tobago, religious leaders led a demonstration against the government’s management of the COVID-19 pandemic and related measures, including mandatory vaccination, in Port-of-Spain on 16 January. Police officers used tear gas and beat demonstrators, claiming that the demonstration was not authorized and that rioters had thrown objects at them. Several demonstrators were injured and 12 were arrested during the clash. Such violence contributed to the 33% increase in violence in Trinidad and Tobago last week relative to the past month that is flagged by ACLED’s Conflict Change Map; the tool warned of a surge in violence in Trinidad and Tobago earlier this month. Later on the same day, union workers protested in San Juan-Laventille around the same issues, also denouncing police use of force during the riot in Port-of-Spain. Less than half of the population of Trinidad and Tobago has been fully vaccinated against COVID-19 (Countryeconomy.com, 24 January 2022).