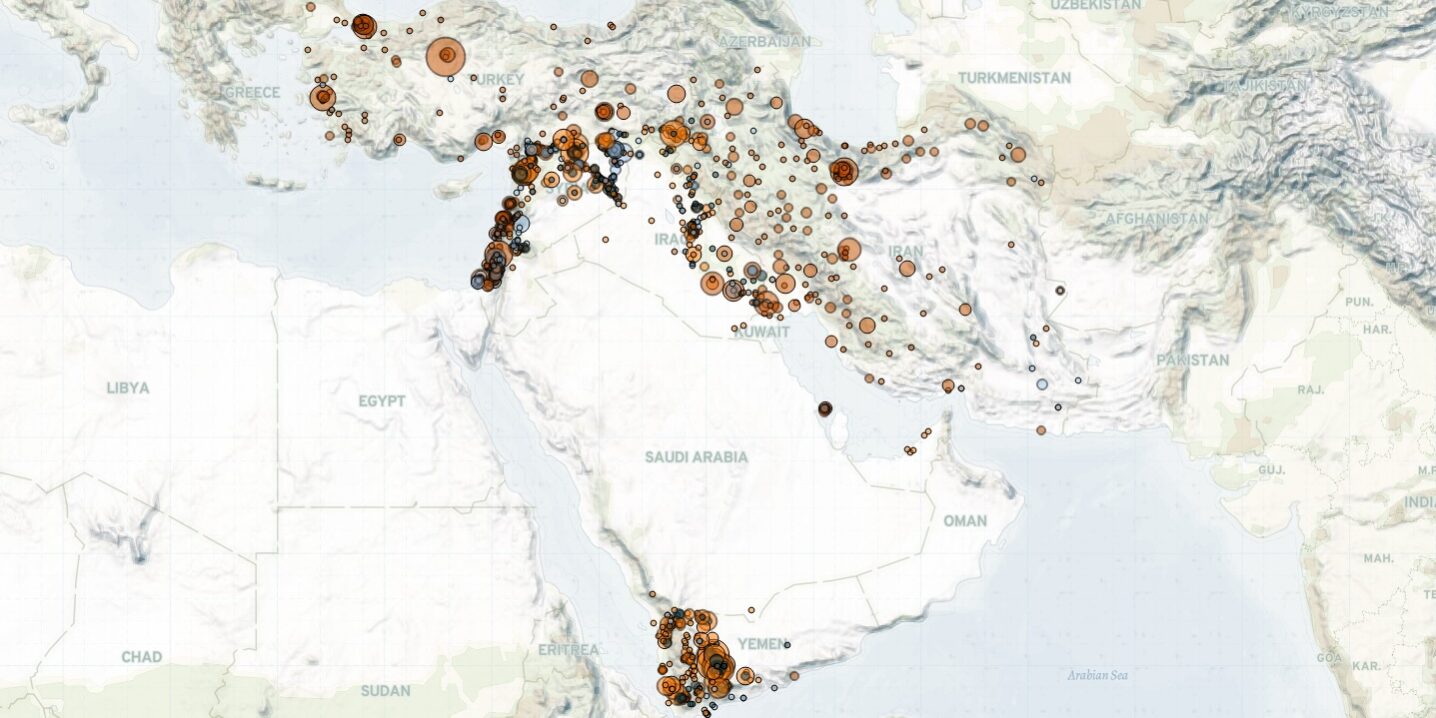 Last week in the Middle East, Houthi forces targeted the United Arab Emirates (UAE) for the second consecutive week, prompting retaliatory airstrikes from the Saudi-led coalition throughout Yemen. On the ground, Houthi forces lost ground in both Marib and Taizz governorates. Organized violence increased in Iraq last week, with Islamic State (IS) activity driving increases in Diyala, Kirkuk, and Salah Al Din. Meanwhile, violence continued to increase in Syria last week as clashes continued because of a high-profile IS prison break the week prior. Elsewhere, Lebanon’s former Prime Minister Saad Hariri retreated from political life, sparking a number of demonstrations. In Palestine, clashes between Israeli soldiers and Palestinian refugees led to a fatality.

In the UAE, UAE and US forces intervened to intercept a Houthi drone and missile attack targeting Al Dhafrah Air Base last week, where 2,000 US personnel are stationed (New York Times, 24 January 2022). Later in the week, a US official announced that the US air force had begun air missions to monitor Houthi drone and missile activity in Yemen (Sky News, 27 January 2022). In Saudi Arabia, a Houthi ballistic missile injured two foreign nationals in Ahad Al Masarihah district of Jizan region.

These attacks prompted retaliatory airstrikes from the Saudi-led coalition throughout Houthi-controlled territory in Yemen last week. These airstrikes led to spikes in violence last week of 300% and 700% in Dhamar and Sanaa governorates, respectively, relative to the past month that are flagged by ACLED’s Subnational Surge Tracker. Dhamar governorate was struck by air raids for the second consecutive week for the first time since early 2019, a sign of the recent geographic expansion of Saudi-led coalition airstrikes. Meanwhile, continued airstrikes on Sanaa city contribute to Amanat al Asimah governorate being considered an area of ‘extreme risk’ by ACLED’s Volatility and Risk Predictability Index, where violence is both common and volatile.

On the ground, Houthi forces continued to lose territory in Marib governorate last week, as the UAE-backed Giants Brigades took control of the entire Harib district and advanced into neighboring Al Abdiyah district. On 28 January, the Giants Brigades announced the conclusion of ‘Operation Southern Cyclone’ against Houthi forces and the repositioning of their forces in Shabwah governorate (Al Amaliqah, 28 January 2022). Some observers suggest that this might have been dictated by the UAE, hoping to interrupt Houthi attacks on its territory (Twitter @annellesheline, 28 January 2022). Houthi forces also lost territory to pro-Hadi forces in Jabal Habashy and Maqbanah districts, contributing to a 148% spike in violence in Taizz governorate last week relative to the past month (see ACLED’s Subnational Surge Tracker for more).

Increased Saudi-led coalition airstrikes and ground offensives against Houthi forces contribute to the 26% increase in violence in Yemen over the past month relative to the past year that is flagged by ACLED’s Conflict Change Map. This early warning tool warned of increased violence to come in early January.

In Syria, clashes between the Syrian Democratic Forces (QSD) and IS contributed to increased violence in Al Hasakeh city last week. Clashes have been going on between the two groups since an IS prison break attempt on 20 January in the Ghoweran neighborhood of the city. Between 23 and 28 January, QSD conducted a widespread arrest campaign to detain suspected IS militants in Al Hasakeh city, during which at least 4,000 civilians were displaced due to the clashes in the Ghoweran neighborhood (Reliefweb, 27 January 2022). On 26 January, QSD forces and unarmed IS militants reached a deal in which IS agreed to release hostages in exchange for medical treatment. Additionally, a large number of IS prison escapees surrendered to QSD forces after running out of food supplies (Al Jazeera, 26 January 2022).

In contrast, the overall number of Turkish airstrike events1Note that one airstrike event can include several airstrikes and that the number of airstrikes can greatly vary from one event to another. As ACLED is an event-based dataset, ACLED records airstrike events rather than airstrikes. This ensures consistency in the data, especially given the overall rare reporting on exact airstrike counts. decreased in Iraq last week, despite a localized increase in strikes targeting Kurdistan Workers Party (PKK) militants in Erbil province. ACLED’s Subnational Surge Tracker warned of increased violence to come in Erbil last month. Turkish airstrikes also decreased in Duhok province, which is considered an area of ‘extreme risk’ by ACLED’s Volatility & Risk Predictability Index, where violence is both common and volatile.

Meanwhile, heightened IS activity in Kirkuk province contributed a 400% increase in violence in the province last week relative to the past month, as flagged by ACLED’s Subnational Surge Tracker. The increase in violence, centered on Rashad and Daquq districts, was primarily driven by clashes between IS militants and Iraqi forces, and IS abductions of civilians. Kurdish security officials regularly claim that IS attacks in Kirkuk are difficult to prevent because the lack of coordination between the Iraqi Army and Peshmerga creates security gaps (Basnews, 30 January 2022).

Similarly, Diyala experienced increased activity between IS militants and Iraqi forces last week. Iraqi forces and the Popular Mobilization Forces launched a counter-IS operation in the Al Azim area of Diyala, in response to an IS attack on 21 January that killed 11 Iraqi soldiers. Clashes between IS militants and Iraqi forces also increased in Salah Al Din province, contributing a 140% increase in violence in the province last week relative to the past month, as flagged by ACLED’s Subnational Surge Tracker.

In Lebanon, former three-time prime minister and founder of the Future Movement Saad Hariri announced his withdrawal from politics last week, calling on all Future Movement party members to follow him in stepping back from politics (CNN, 24 January 2022). Additionally, he announced that the Future Movement – Lebanon’s largest Sunni party – will not partake in the upcoming May 2022 parliamentary elections. Hariri stated that he does not foresee a positive future for Lebanon, partially due to Iran’s growing influence and the government’s dysfunction (VOA News, 26 January 2022). Hariri’s decision sparked a dozen demonstration events by Future Movement supporters last week, mainly in the capital, Beirut. The Sunni Muslim community, which is one of three religious communities that make up the power-sharing system in Lebanon, now stands without a leader, raising concerns for Lebanon’s future amidst an already crippling economic crisis (NY Times, 24 January 2022).

Lastly, last week in Palestine, a Palestinian died from tear gas inhalation after clashes erupted between Israeli military forces and Palestinian residents at the entrance to the Qalandia refugee camp in East Jerusalem. While six rioters were wounded by rubber bullets, a soldier was wounded with a stone that hit his head. Meanwhile, an unidentified armed group opened fire on an Israeli military post near the Orthodox settlement of Elon Moreh in Nablus in a drive-by shooting, though no casualties were reported in the attack.