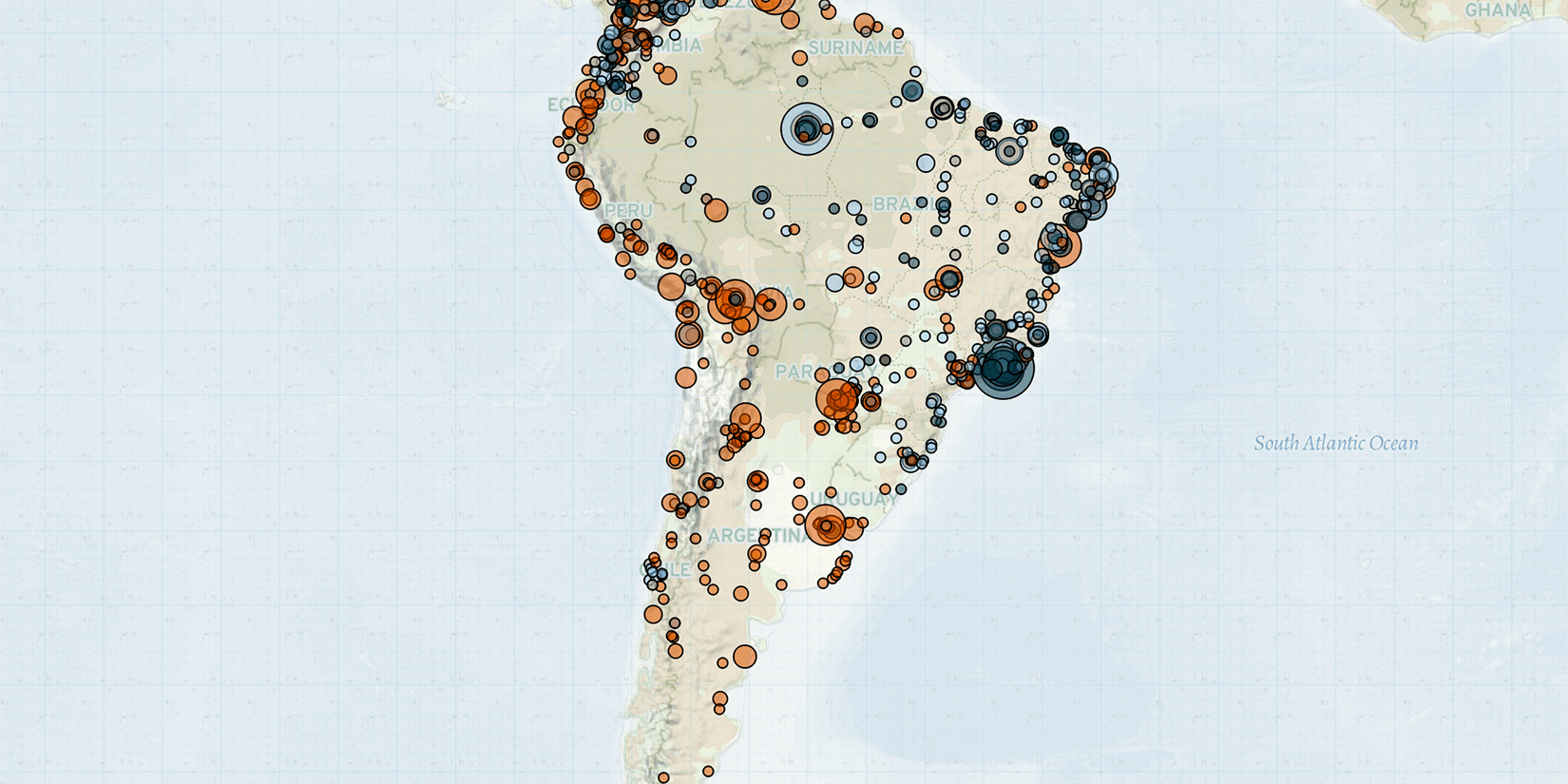 Last week in South America, thousands of people took to the streets in Brazil to protest the killing of a Congolese refugee. Additionally, a gunman opened fire on Afro-Brazilian religious groups in an attack reportedly motivated by religious intolerance. In Argentina, thousands of citizens protested against a debt deal with the International Monetary Fund (IMF) (La Voz del Interior, 9 February 2022). In Colombia, armed clashes continued to take place in the Arauca department due to a turf war between the National Liberation Army (ELN) and dissident factions of the Revolutionary Armed Forces of Colombia (FARC). Likewise, the conflict between the ELN and FARC dissidents resulted in clashes in Venezuela along the border with Colombia.

In Brazil, thousands of protesters took to the streets on 5 February in several state capitals to demand justice for a Congolese refugee (The Guardian, 5 February 2022). The victim was  beaten to death by his employer and co-workers in Rio de Janeiro on 24 January after demanding pay for two days’ work at a beach kiosk (Brasil de Fato, 5 February 2022). Demonstrators highlighted broader issues of structural racism and violence disproportionately affecting marginalized groups, such as Black and low-income citizens, as well as Black immigrant groups (DW, 10 February 2022). These demonstrations come a few days after another high-profile killing of a Black man by a navy sergeant in the city of São Gonçalo, Rio de Janeiro on 2 February. Despite his claim that he shot the victim, who was his neighbor, in self-defense after mistaking him for a burglar, the sergeant was arrested and indicted for intentional homicide (Diario do Nordeste, 10 February 2022). Meanwhile, on 6 February, an unknown shooter attacked Afro-Brazilian Umbanda and Candomblé religious groups during a ceremony at a beach in Rio de Janeiro. The perpetrator fired six shots from the balcony of an apartment and shouted racial slurs against the group and their religious practices. Racial minority groups are disproportionately affected by violence in Brazil. Despite Black and mixed-race people representing approximately 57% of the Brazilian population, they account for 77% of the victims of homicide in the country (G1, 31 August 2021).

Elsewhere in Brazil, four people were shot and killed, and five others were injured, in the Juazeiro do Norte city, Ceará state, by approximately seven armed individuals who invaded their private residence. Although one suspected perpetrator was later arrested, no armed group was identified as being behind the killing. The suspect had charges against him for drug trafficking and other homicides (G1, 14 February 2022). ‘Chacinas’, or the violent killing of three or more civilians at the same time, are a common practice carried out by non-state armed groups in Brazil, usually fueled by a settling of scores or vengeance between groups. This was the first recorded ‘chacina’ in Ceará state thus far this year, and the second in the Northeast region of the country. In 2021, ACLED recorded five such attacks against civilians in Ceará state, resulting in 20 deaths. Additionally, another two fatalities were reported in Ceará state last week, also stemming from targeted attacks against civilians. These trends contribute to the 300% increase in violence in the state over the past week relative to the past month, as flagged by ACLED’s Subnational Threat Tracker.

In Argentina, on 8 February, more than 20,000 people joined a nationwide protest in Buenos Aires to repudiate a new agreement between the government and the IMF on the repayment of a USD 44 billion loan (La Voz del Interior, 9 February 2022). Under the new deal, announced on 28 January, Argentina would progressively reduce its fiscal deficit from 3% in 2021 to just 0.9% in 2024 (El País, 28 January 2022). Despite this, the government has claimed that the debt deal would not affect social spending or economic growth (El País, 28 January 2022). However, protesters believe it will increase poverty and will make the working-class bear the expense of fiscal adjustments (DW, 9 February 2022). During the protest, unidentified armed individuals fired several shots into the air, and beat and injured several protesters. A teenager was stabbed and taken to hospital in serious condition and admitted to the intensive care unit. This attack on demonstrators contributed to the 117% increase in violence in Buenos Aires last month relative to the past year flagged by ACLED’s Subnational Threat Tracker, which first warned of increased violence to come in Buenos Aires in the past month.

In Colombia, armed clashes continued to take place in the Arauca department last week due to a turf war between the ELN and FARC dissidents. During a deadly clash in Arauquita, ELN members killed four dissidents of the 10th Front of FARC. While the ELN and the FARC agreed to end the conflict in Arauca and to share control of illegal activities and revenues in 2010, the agreement fell apart following the FARC’s peace agreement with the government in 2016 (Infobae, 11 February 2022). FARC dissident groups seek to expand their territorial control and to gain access to extortion money and drug trafficking routes in the region (BBC, 4 January 2022). ACLED’s Subnational Surge Tracker first warned of increased violence to come in Arauca in the past month. Fighting involving the ELN and FARC dissidents has contributed to the 37% increase in violence in Colombia last month relative to the past year flagged by ACLED’s Conflict Change Map, which first warned of increased violence to come in the country in the past month.

In Venezuela, ongoing violence involving FARC dissidents and the ELN resulted in multiple civilian deaths in Apure state last week; ACLED’s Subnational Surge Tracker first warned of increased violence to come in Apure in the past month. On 7 February, a civilian bystander was killed in the crossfire of a shoot-out between the ELN and the 10th Front of FARC dissidents in El Amparo city. Following the clash, the 10th Front accused the Venezuelan military of collaborating with the ELN and FARC’s Second Marquetalia to target the allied forces of the 10th, 28th, 45th, and 56th fronts of FARC dissidents in the area (El Carabobeno, 8 February 2022). Meanwhile, at least eight civilians died last week due to the activation of landmines placed near the border by the warring guerrilla groups. The threat posed by mines and IEDs in Apure state has escalated considerably in recent weeks, as emphasized by the discovery and defusal of a bomb outside an elementary school near La Victoria on 1 February. Government raids against ELN and FARC dissident camps also resulted in the capture of around 5,000 sticks of explosive material and more than 900 cylinder bombs last week, as well as the defusal of hundreds of IEDs (Efecto Cocuyo, 8 February 2022).  This violence contributed to the 28% increase in violence in Venezuela last month relative to the past year flagged by ACLED’s Conflict Change Map, which first warned of increased violence to come in the country in the past month.