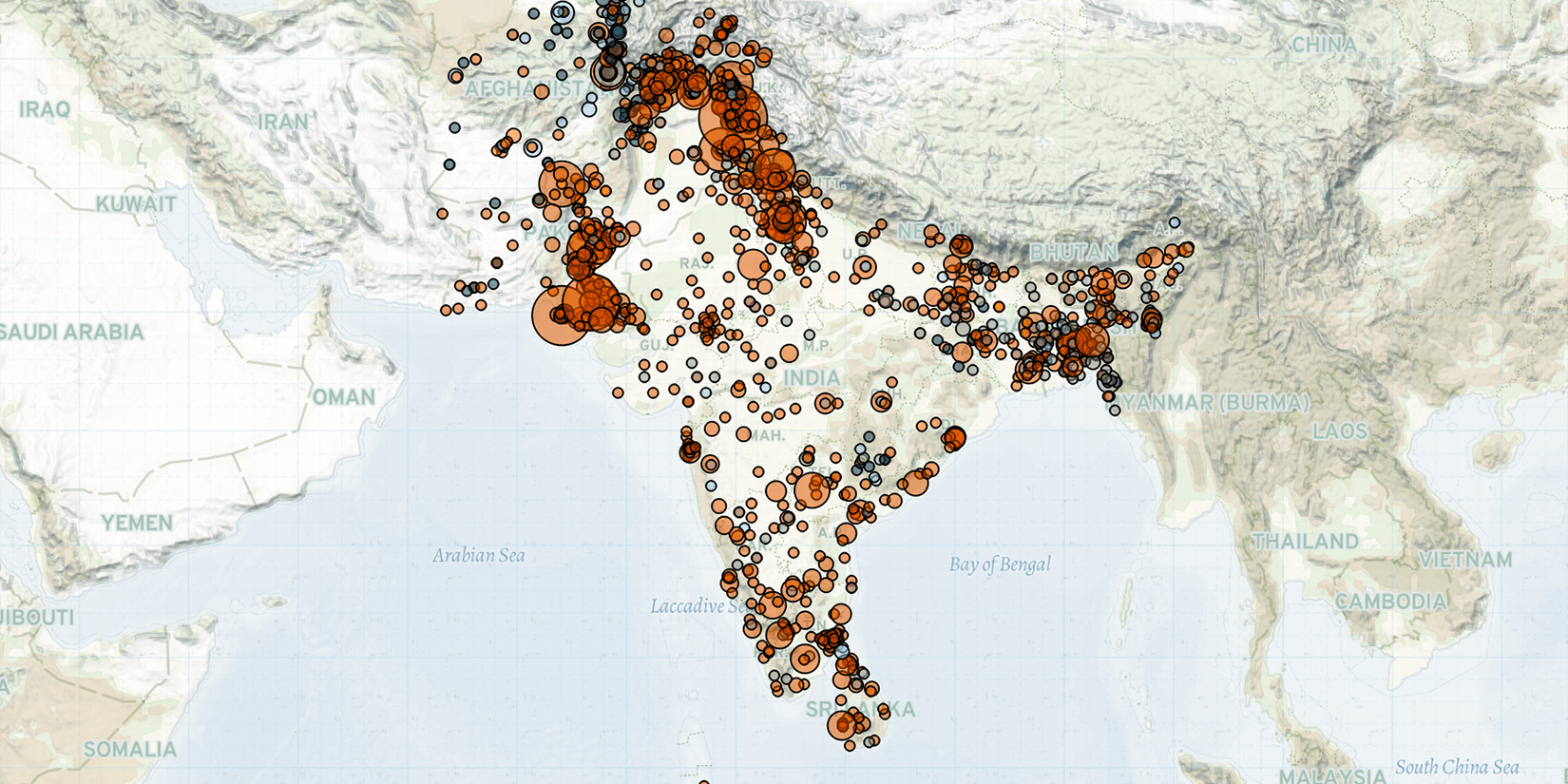 Last week in South Asia and Afghanistan, attacks against civilians continued in Afghanistan as Taliban detentions targeting journalists raised concerns about press freedom. The National Resistance Front (NRF) and Islamic State (IS) also continued their attacks against the Taliban. In Pakistan, Tehreek-i-Taliban Pakistan (TTP) increased attacks on security forces, while Baloch separatist groups engaged in remote violence. Meanwhile, nationwide demonstrations marking ‘Kashmir Solidarity Day’ were held in Pakistan against the Indian government’s 2019 repeal of Article 370 of the Constitution of India, which had granted special status to the state of Jammu & Kashmir (J&K). In India, Naxal-Maoists carried out multiple acts of remote violence and civilian targeting in the Red Corridor. Lastly in India, demonstrations surged in Karnataka state over the banning of hijabs (headscarves) in several government-run educational institutions. Lastly, election-related violence continued ahead of legislative assembly elections in Manipur state. In Bangladesh, rival political parties and their supporters clashed during the seventh and final phase of the Union Parishad polls on 7 February.

In Afghanistan, at least 10 civilians were killed in targeted attacks by the Taliban and unknown groups across the country last week. In Badghis province, one worshipper was killed and at least eight were injured in a bomb explosion in front of a mosque in Qala-i-Now city during Friday prayers. The attack was not claimed by any group. In Baghlan province, Taliban forces also reportedly killed a former policewoman and another civilian accused of supporting the NRF. Amid multiple attacks on civilians in Baghlan since the start of 2022, ACLED’s Subnational Surge Tracker had warned of increased violence to come in the province. A shopkeeper in Kabul’s Mir Bacha Kot district was also killed by Taliban forces, triggering locals to hold an anti-Taliban protest.

Separately, two foreign and two local journalists working with UNHCR were released last week after spending six days in detention. Taliban officials claim the journalists were detained due to lacking proper documentation. The detentions sparked international outcry about freedom of press under Taliban rule (New York Times, 11 February 2022). The Taliban have staged multiple arrests of journalists thus far in 2022, with some journalists claiming to have been beaten and tortured while in detention (Committee to Protect Journalists, 3 February 2022).

In Pakistan, TTP militants continued to target security forces in Khyber Pakhtunkhwa province last week. TTP militants fired at Pakistani military forces from across the Afghanistan-Pakistan border in Kurram district, killing at least five Pakistani soldiers. This is the second such cross-border attack since the Taliban came to power in Afghanistan. Following the attack, the Afghan government denies that firing originated from within Afghan territory (Al Jazeera, 6 February 2022). Elsewhere, military forces killed three TTP militants in multiple clashes during intelligence-based operations in North Waziristan district, while another TTP militant was killed during a clash in Tank district.

Elsewhere in Pakistan, Baloch separatists used remote violence to target civilians and Pakistani security forces in Balochistan province last week. In Dera Murad Jamali town, at least one civilian was killed and five others were injured in a grenade attack by suspected Baloch separatists. In Quetta city, the Baloch Nationalist Army (BNA) claimed responsibility for a bomb explosion that targeted a patrol team of Frontier Corps (FC), injuring two FC personnel and one civilian. BNA was formed on 11 January through the merger of two separatist groups: the Baloch Republican Army (BRA) and the United Baloch Army (UBA) (Gandhara, 20 January 2022). These attacks come amid heightened levels of violence in Balochistan, following deadly attacks by Baloch Liberation Army (BLA) militants on military bases in Nushki and Panjgur districts the week prior. Earlier this month, Pakistan’s Interior Ministry issued a countrywide alert, ordering strict vigilance by intelligence and law enforcement agencies in view of the increasing attacks in the province (The News International, 4 February 2022). ACLED’s Subnational Surge Tracker first warned of increased violence to come in Balochistan in the past month.

Meanwhile, civil society members, students, political activists, and others held demonstrations across Pakistan to commemorate ‘Kashmir Solidarity’ Day on 5 February. Demonstrators rallied against the Indian government’s decision to repeal Article 370 of the Indian constitution on 5 August 2019, which ended the special status for India-administered J&K, and bifurcated the state into two union territories (Dawn, 6 February 2022).

In India, Naxal-Maoist rebels engaged in civilian attacks and remote violence in the Red Corridor last week. In Odisha state, two civilians were killed in IED explosions triggered by Communist Party of India (Maoist) rebels in Kalahandi and Kandhamal districts. The Communist Party of India (Maoist) also set ablaze road construction equipment in Kandhamal district, opposing local government elections in the state scheduled between 16 and 24 February (India Today, 9 February 2022). In Chhattisgarh state, rebels killed two civilians, suspecting one of them of being a police informer. Naxal-Maoists have increasingly targeted civilians in recent months, including local government officials and villagers, accusing them of cooperating with police. These trends contribute to the 100% increase in violence in Chhattisgarh last week relative to the past month flagged by ACLED’s Subnational Surge Tracker, which first warned of increased violence to come in the state in the past month.

In Jharkhand state, Communist Party of India (Maoist) detonated an IED and clashed with police during separate attacks in Lohardaga district, injuring two police personnel. Meanwhile, cadres of Jharkhand Jan Mukti Parishad (JJMP) clashed with police forces in Latehar district. These engagements contributed to the 163% increase in violence in Jharkhand last month relative to the past year flagged by ACLED’s Subnational Threat Tracker, which had first warned of increased violence to come in the state in the past month.

Lastly in India, election violence continued ahead of legislative assembly elections in Manipur state, which are scheduled to be held on 27 February (Hindustan Times, 8 January 2022). Unknown assailants targeted the residences of National People’s Party (NPP) members with gunfire and an IED in Imphal East district, contributing to the 286% increase in violence in Manipur last month relative to the past year flagged by ACLED’s Subnational Threat Tracker, which had first warned of increased violence to come in the state in the past month.

In Bangladesh, election-related violence increased during the seventh and final phase of the Union Parishad polls on 7 February (New Age Bangladesh, 7 February 2022). At least three people were killed in multiple clashes involving supporters of Bangladesh Awami League (AL) and independent candidates in Chittagong division. These clashes contributed to the 125% increase in violence in Chittagong over the past week relative to the past month, as flagged by ACLED’s Subnational Surge Tracker. Violence in Chittagong is both common and highly volatile; it is considered an area of ‘extreme risk’ by ACLED’s Volatility and Predictability Index.