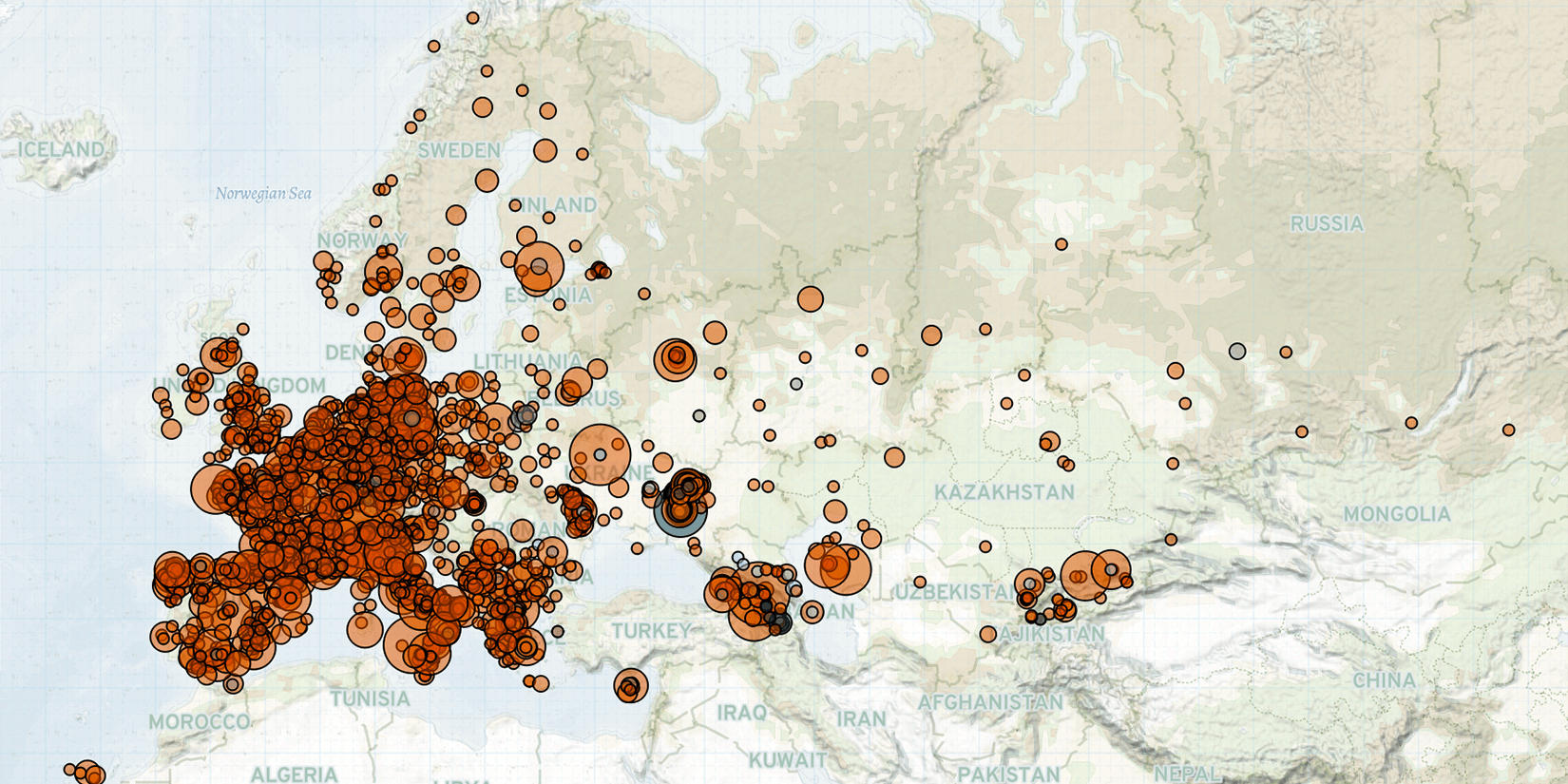 Last week in Europe, Central Asia, and Caucasus, rising energy prices sparked demonstrations across multiple countries, including farmer-led demonstrations in Greece, Ireland, France, and Italy. ‘Freedom Convoy’ demonstrations also took place in several countries. The recent trend in far-left violence continued in Greece. The migrant crisis continued along the Belarusian-Polish border, with fresh clashes between Polish state forces and migrants. Demonstrations against sexual violence against women also increased in Poland. Lastly, fighting escalated along the Armenia-Artsakh-Azerbaijan Line of Contact and in the Donbas region of Ukraine.

Economic uncertainty around rising costs and prices drove demonstration activity across multiple countries last week, including farmer-led demonstrations in Greece, Ireland, France, and Italy. In Greece, farmers continued to demonstrate over surging energy prices pushing up costs for fuel and fertilizer, and setting up roadblocks across the country. In Ireland, farmers represented by the Irish Farmers Association (IFA) held a series of coordinated demonstrations outside multiple branches of Dunnes supermarket, demanding better prices for primary producers. Meanwhile, in France, Young Farmers (JA) and National Federation of Farmers Unions (FNSEA)-led farmer demonstrations continued in front of several supermarkets for the second week. They demand that increasing production costs are taken into consideration when establishing prices. In Italy, more than 30 demonstration events were staged across the country last week to protest price increases. At the call of the National Federation of Italian Farmers (Coldiretti), farmers gathered in at least 25 locations on 17 February to denounce the increasing price of fertilizers and raw materials for animal feed. Simultaneously, tourist transportation workers took to the streets in at least eight locations to lament the impact of the price surge on the cost of fuel.

In the United Kingdom, demonstrations involving trade unions and politicians were staged in at least 25 towns and cities last week to demonstrate against the rising cost of living. Currently, the United Kingdom is experiencing the highest level of inflation in almost 30 years at 5.4% (The Guardian, 12 February 2022). Demonstrators demand the government do more to ease hardship amid the ongoing rise in the cost of living, in particular with the recent rises in food and energy prices.

Last week, ‘Freedom Convoy’ demonstrations against coronavirus measures — inspired by those in Canada — were held in multiple countries. In France, convoys were held in a dozen locations, with more than 7,000 people gathering in Paris (Ouest France, 12 February 2022). Police restricted access to parts of the city to limit the impact of their presence, deploying tear gas and riot police. ​​In the Netherlands and Belgium, motorized demonstrations took place in Den Haag on 12 February and in Brussels on 14 February, respectively. In Brussels, police deployed roadblocks to split up the demonstration. The demonstration in Den Haag turned violent when a small number of demonstrators refused to disperse and attacked a police officer. A motorcade also took place in Vienna, Austria.

In Germany, no ‘Freedom Convoy’ demonstrations were held last week, with the number of demonstration events against coronavirus-related measures continuing to decline ahead of moves to loosen the majority of measures by 20 March (DW, 14 February 2022). Ten demonstration events turned violent, contributing to the 26% increase in violence in Germany last week relative to the past month flagged by ACLED’s Conflict Change Map, which first warned of increased violence to come in the country in the past month.  While the majority of these were a result of small skirmishes on the sidelines of demonstrations, larger clashes took place in Hamburg and Dusseldorf involving counter-demonstrators associated with Antifa and the Social Democratic Party. Violence in Germany has increased by 78% over the past month relative to the last year.

Additionally, far-left violence continued in Greece last week. On 18 February, the Rouvikonas anarchist collective smashed the windows of a supermarket branch that pressed charges against an elderly woman who stole food. The group has engaged in similar attacks on private businesses before, including damaging the property of a highway management company after a mass-stranding on a snow-covered highway on 1 February (Ekathimerini, 1 February 2022). The attack comes a little more than a week after Organisation Anarchist Action used makeshift explosive devices to start a fire at an Orthodox Christian religious society in Thessaloniki. The Organisation Anarchist Action is an emerging actor that has become active over the past month in Greece, flagged by ACLED’s Emerging Actor Tracker. The presence of emerging actors often indicates a change in the conflict environment, with civilians often bearing the burden of such new activity. Meanwhile, another militant anarchist group, Anarchist Cell Santiago Maldonado, has claimed responsibility for a series of recent targeted gas canister explosions outside the homes of public figures, including a journalist, government figures, and a police union leader. The group claims that the attacks, which began last year, target the capitalist system and its handling of the current health and economic crises impacting the health sector and growing class inequality (To Vima, 14 February 2022; Athens Indymedia, 14 February 2022).

On the Belarusian-Polish border, the migrant crisis continues, contributing to the 133% increase in violence in Poland last week relative to the past month; ACLED’s Conflict Change Map first warned of increased violence to come in the country in the past month. Polish border guards continue to report attempts by migrants to cross the border from Belarus, leading to clashes between migrants and Polish police and military forces (Straz Graniczna, 13 February 2022; 16 February 2022). Both Polish and Belarusian forces have been accused of human rights abuses against migrants stranded at the border (The Guardian, 8 February 2022).

Separately, demonstration activity in support of women’s rights increased in Poland. Last week, the Women’s Strike feminist movement organized over 20 demonstration events across the country, demanding an end to rape and violence against women. The demonstrators demand the government change the legal definition of rape in Poland so that the Polish criminal code defines the lack of consent as rape, rather than requiring that a victim show resistance (Ogolnopolski Strajk Kobiet, 16 February 2022). These demonstrations come less than a month after the last surge in demonstration events against restrictions on access to abortion in the country following the death of two women who were denied abortions (The Washington Post, 18 February 2022).

Along the Armenia-Artsakh-Azerbaijan Line of Contact, the number of ceasefire violations continued to rise last week. This violence contributed to the 146% increase in violence in Azerbaijan, including Artsakh1The disputed territory of Nagorno-Karabakh is internationally recognized as part of Azerbaijan. ACLED refers to the de facto state and its institutions as Artsakh — the name by which the de facto territory refers to itself. For more on methodology and coding decisions around de facto states, see this methodology primer., last week relative to the past month flagged by ACLED’s Conflict Change Map, which first warned of increased violence to come in the country in the past month. The military forces of Azerbaijan wounded a soldier of the Artsakh military forces during one of the clashes, and fired at civilian houses in Taghavard village of Artsakh. Separately, two Azerbaijani civilians were hit by a landmine at the Tartar region in one of the villages that fell under Azerbaijani control after the war in 2020.

In the Donbas region of Ukraine, fighting between Ukrainian forces and Russian-backed separatist forces escalated last week, resulting in a 175% increase in violence in the country relative to the past month, flagged by ACLED’s Conflict Change Map. There were 50 armed clashes, 234 shelling incidents, and one fatality reported. The escalation began on 17 February and was marked by an increase in targeting of civilians and civilian infrastructure by Russian-backed forces. Following the increase in violence, pro-Russian separatist leaders announced the evacuation of the breakaway region’s residents to southeast Russia (Washington Post, 19 February 2022). On 21 February, Russian President Vladimir Putin recognized independence of the two separatist-controlled republics in Donbas and officially sent Russian troops to rebel-held eastern Ukraine (RFE/RL, 22 February 2022). The move raises fears that Russia is paving the way for an offensive, as some 150,000 Russian troops continue to hold positions along the Russian-Ukrainian border, in Belarus, and the occupied Crimean peninsula (BBC, 22 February 2022). The recognition also effectively kills off the Minsk accords — the agreements reached by Ukraine and Russia in 2014-2015 on the peaceful settlement of the armed conflict in Donbas; the protocol foresees the autonomy of the rebel-held regions within Ukraine (The Guardian, 21 February 2022).

The escalation of fighting in Donbas and the threat of further Russian incursions sparked protests in Ukraine and the wider region last week. People demonstrated against war and in solidarity with Ukraine in Russia, as well as in Georgia, Latvia, Estonia, the Czech Republic, Finland, Cyprus, Poland, Italy, and Germany.