In late January 2022, a series of loosely organized truck convoys from British Columbia and other parts of western Canada began to converge on the country’s parliament in Ottawa, Ontario. This so-called ‘Freedom Convoy’ was organized in response to vaccine mandates for truck drivers seeking to cross the border with the United States (Reuters, 20 January 2021). It soon expanded to encompass broader opposition to pandemic-related public health restrictions, intersecting with far-right extremist elements and conspiracy movements. Demonstrations against vaccine mandates, and in support of the truck drivers, were organized along the convoy’s routes and spread to every Canadian province. After the ‘Freedom Convoy’ arrived at Parliament Hill in Ottawa, demonstrators established an encampment and held daily rallies.

Around the country, ‘Freedom Convoys’ cut off traffic and blocked streets. ‘Freedom Convoy’ demonstrators also formed blockades at multiple border crossings with the United States, including in Sarnia, Ontario; at the Ambassador Bridge in Windsor, Ontario; near Emerson, Manitoba; and near Coutts, Alberta. At the Coutts blockade, authorities arrested multiple convoy participants for “conspiring to murder police officers” and seized a cache of firearms, body armor, and ammunition (New York Times, 21 February 2022). Canadian officials reported that some of the individuals arrested in Alberta had “strong ties” to Diagalon, a “‘far-right extreme organization’ with a presence in Ottawa” (Washington Post, 20 February 2022). Press freedom watchdogs and healthcare groups documented repeated harassment of journalists and health workers during the convoy demonstrations, including cases of reporters being shoved and spit on (Globe & Mail, 20 February 2022; NPR, 12 February 2022).

Outside of isolated arrests, most convoy demonstrations faced low levels of police intervention. On 18 February, after Prime Minister Justin Trudeau invoked the Emergencies Act, police moved in to clear the Ottawa encampment following a three-week occupation. Reports indicate that “law enforcement remained largely restrained,” with “armed officers, some on horses and others in tactical gear, slowly mov[ing] truck-by-truck and block-by-block to push out demonstrators” (Washington Post, 20 February 2020). In some cases, police used stun grenades and pepper spray, and officials are investigating an “incident where a woman was reportedly seriously injured after an interaction with a police officer on a horse, and a second where an officer discharged a less-than-lethal firearm at protesters” (CNN, 21 February 2022). Authorities say that convoy participants “assault[ed] officers with weapons,” attempted to take weapons from armed police personnel, and in some cases were equipped with body armor and smoke grenades (Global News, 20 February 2022; CTV News, 18 February 2022). They also accuse demonstrators of bringing children “to the front of the police operation” in an apparent effort to slow their advance (CTV News, 19 February 2022). Nearly 200 arrests were made, including for assault (CNN, 21 February 2022).

Other ‘Freedom Convoy’ and anti-vaccine demonstrations have continued around the country. Demonstrations against pandemic-related restrictions, vaccines, and Prime Minister Trudeau have become increasingly common since last fall, when the government first approved COVID-19 vaccines for children (Reuters, 19 November 2021). Despite the end of the Ottawa encampment, anti-vaccine mobilization is likely to persist and evolve in the coming months (New York Times, 21 February 2022).

Outside Canada, the ‘Freedom Convoy’ has inspired similar convoy demonstrations in countries and territories around the world, including in the United States, France, Belgium, the Netherlands, the United Kingdom, Cyprus, Austria, Australia, New Zealand, and Saint Pierre & Miquelon. In France alone, demonstrations have been reported in dozens of locations as part of a ’Freedom Convoy’ to Paris and Brussels. Multiple convoys are planned or ongoing in the United States, with some reportedly aiming to disrupt the State of the Union address in Washington, DC next month (Fortune, 18 February 2022). American demonstrations in support of the ‘Freedom Convoys’ have been particularly common in Alaska, where restrictions on Canadian ground entry affect the movement of goods between Alaska and the lower 48 states (Daily News-Miner, 22 January 2022). 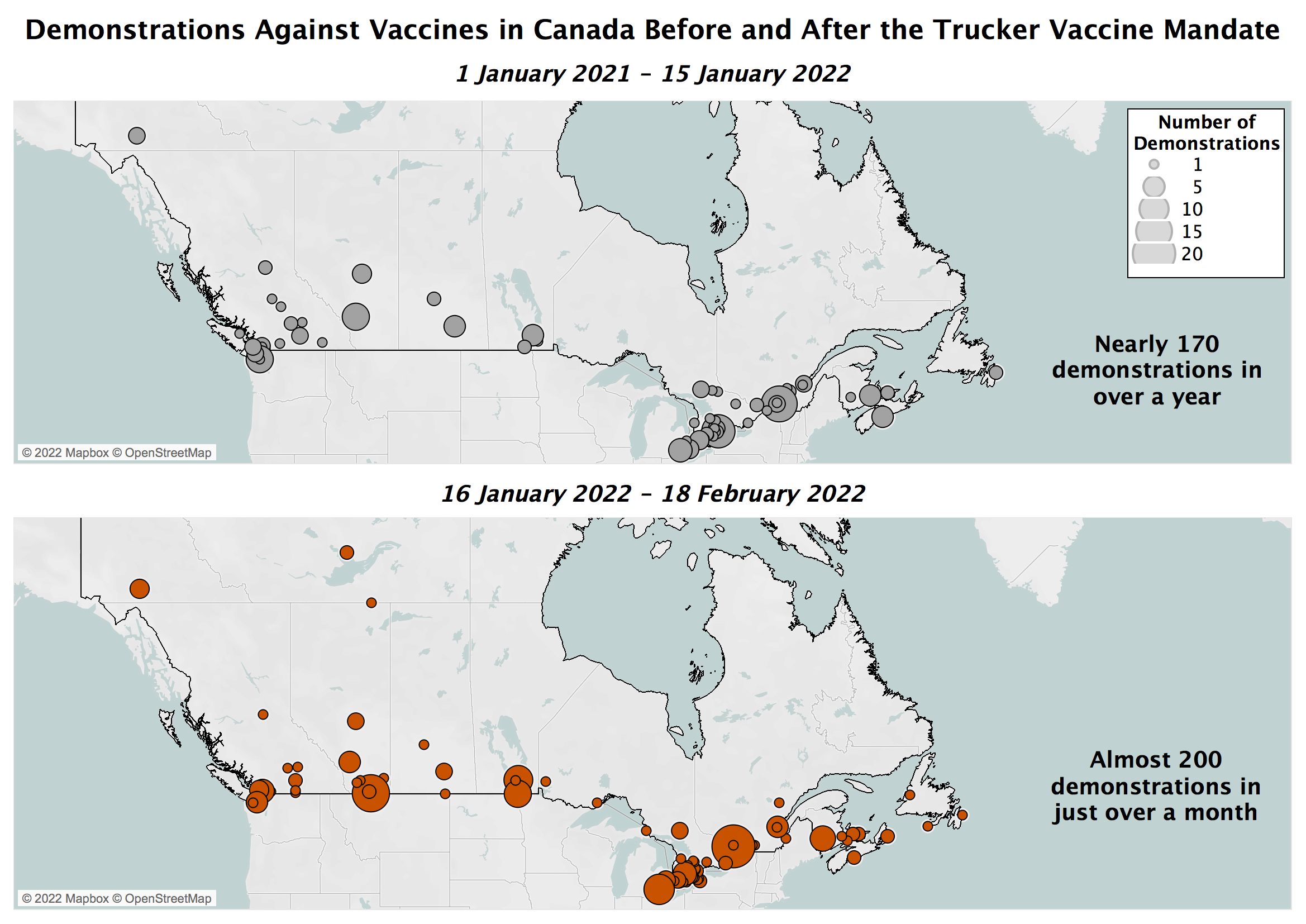 Although anti-vaccine demonstrations like the ‘Freedom Convoy’ have blocked streets and border crossings, Canadian police have been slow to intervene. Analysis of new ACLED data on protest activity in Canada from the start of 2021 to the present indicates that the limited response to the ‘Freedom Convoy’ is not an aberration: other types of demonstrations that are common in Canada, namely protests involving Indigenous groups and environmental activists, are met with engagement by law enforcement approximately twice as often as demonstrations against pandemic-related restrictions, vaccines, or Prime Minister Trudeau. Indigenous and environmental demonstrations face police engagement over 20% of the time, while anti-vaccine, anti-restriction, or anti-Trudeau demonstrations face police engagement just 10% of the time.

This disparity is not linked to different rates of protest violence or destructive activity. The two sets of demonstrations have involved the same number of violent or destructive events, meaning that roughly 97-98% of both types of demonstrations have remained peaceful. The significant divergence in intervention rates, despite equal levels of non-violent activity, suggests that the severity of police response is predicated on factors other than protester behavior. Recent reports that Ontario police officers were named in a leaked list of donations to the ‘Freedom Convoy’ have raised concerns of law enforcement bias (Toronto Star, 22 February 2022). 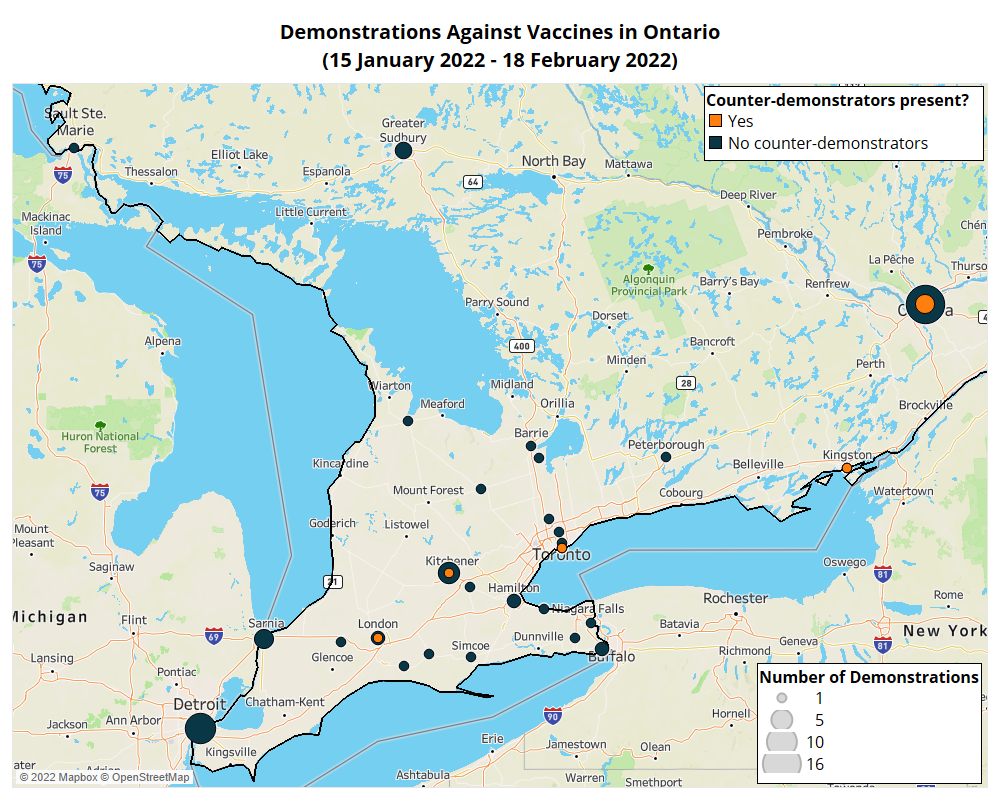