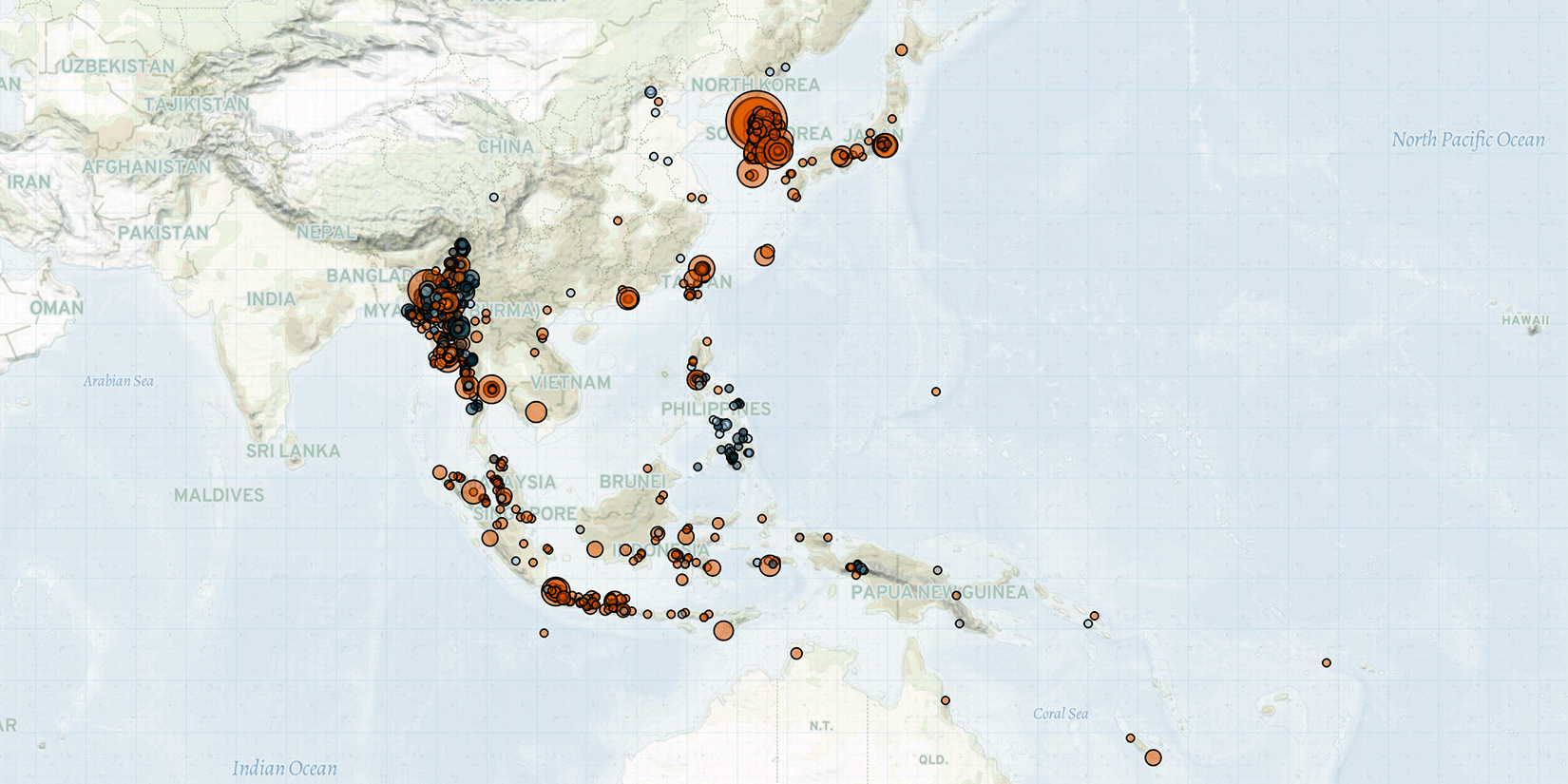 Last week in the East Asia Pacific region, heavy fighting between the Myanmar military and ethnic armed organizations and resistance groups was reported in Kachin and Kayah states. Meanwhile, on 22 February, state forces launched a crackdown on anti-coup supporters and made arrests in response to a nationwide anti-coup strike. In the Philippines, the military killed five individuals that they accuse of being New People’s Army (NPA) militants in a military operation in Davao de Oro province in Mindanao. In Indonesia, fighting between state forces and the separatist West Papua National Liberation Army (TPNPB) was reported in Puncak regency, Papua province. In Thailand, Malay Muslim separatists continued to launch bomb attacks in the southern provinces. Meanwhile, rallies in support of Ukraine were reported across the region.

In Myanmar, heavy fighting between military forces and Karenni coalition forces continued in Kayah state last week. The clashes, which had started in the southern Shan state border town of Moe Bye the week prior, spread along the strategic road connecting Moe Bye town and Demoso township in Kayah. Three military soldiers and a member of the Karenni Nationalities Defense Force (KNDF) were reportedly killed in the fighting on 22 February (DVB, 24 February 2022). The military also conducted aerial bombardments between 22 and 24 February in Demoso township, with at least two civilian fatalities reported (Irrawaddy, 24 February 2022). Violence in Kayah is both common and highly volatile; it is considered an area of ‘extreme risk’ by ACLED’s Volatility and Predictability Index.

Elsewhere, in Kachin state, clashes between the military and the joint forces of Kachin Independence Organization/Kachin Independence Army (KIO/KIA) and the People’s Defense Force (PDF) under the National Unity Government increased in Puta-O township last week. On 22 February, the military launched aerial attacks on 22 February near Tsum Pi Yang village, forcing 1,000 civilians to flee (Burma News International, 28 February 2022). ACLED’s Subnational Surge Tracker first warned of increased violence to come in Kachin state in the past month. Kachin is also considered an area of ‘extreme risk’ by ACLED’s Volatility and Predictability Index as violence is both common and highly volatile.

Meanwhile, anti-coup activists launched a ‘Six Twos Strike’ – in reference to the date 22.02.2022 – on 22 February in a show of continued resistance against the junta. Anti-coup protests were reported in Kachin and Kayin states, as well as in Magway, Mandalay, Sagaing, Tanintharyi, and Yangon regions. Notably, state forces cracked down on a protest in Monywa township by ramming a vehicle into a crowd of protesters. State forces also arrested dozens of people who were accused of participating in the campaign in Mon state, and Sagaing and Tanintharyi regions on the same day. Protesters in Myanmar have been met with deadly force by the military junta — more so than in any other country — since the February 2021 coup.

Last week in the Philippines, the military killed five people — including two volunteer teachers working in Lumad communities — in a military operation in New Bataan town, Davao de Oro province. The military claims that all those who died were NPA militants killed during an armed clash (Rappler, 25 February 2022; Sunstar Daily, 25 February 2022). However, Save Our Schools Network (SOS) — with which the teachers volunteered — dismissed the military account and described the operation as a massacre against civilians (Rappler, 25 February 2022). The NPA also denies that a clash took place (Rappler, 26 February 2022). The government has long cracked down on indigenous Lumad schools and their personnel, ‘red-tagging’ these as venues for communist rebel recruitment (Rappler, 18 September 2020). ‘Red-tagging’ refers to labeling someone a ‘communist’ or ‘terrorist’ and designting them a threat to the state. The ‘red-tagging’ of Lumad schools and other left-leaning individuals and organizations has been a particularly deadly feature of the Rodrigo Duterte administration, especially following the establishment of the National Task Force to End Local Communist Armed Conflict (NTF-ELCAC) in December 2018. Through the NTF-ELCAC, the Duterte administration formalized a “whole-of-nation” approach to address the communist insurgency (NTF-ELCAC, 2022). NTF-ELCAC coordinates community-based and non-military approaches to ending the armed insurgency in close partnership with state forces (NTF-ELCAC, 2022). In practice, however, this has led to a nationwide ‘red-tagging’ campaign in which legal activists have been falsely linked to armed communist rebel activity (Karapatan, 26 February 2021). NTF-ELCAC’s red-tagging has been condemned by human rights groups (Karapatan, 26 February 2021; CNN, 22 April 2021). (For more on violence in the Philippines, including the red-tagging of activists, see this ACLED analysis piece.)

In Indonesia, there was an increase in violence in Puncak regency, Papua province last week, driven by two days of fighting between state forces and the separatist TPNPB. On 19 February, state forces clashed with TPNPB rebels at Amingaru airport in Ilaga district. The following day, the rebels fired at security forces, as casualties from the previous clash were being evacuated. A rebel was killed during the fighting. These trends contribute to the 140% increase in violence in Papua over the past week relative to the past month, as flagged by ACLED’s Subnational Surge Tracker.

Additionally, the TPNPB carried out a series of arson attacks targeting infrastructure linked to government development projects and opened fire on a construction worker in Puncak regency last week. The TPNPB openly opposes infrastructure development projects carried out by the central authorities, accusing the Indonesian government of attempting to expand its influence in the region (The Diplomat, 24 December 2018). ACLED’s Conflict Change Map first warned of increased violence to come in Indonesia last month.

Elsewhere in Indonesia, truck drivers launched a series of demonstrations last week — mainly in Java — against new regulations preventing customized trucks from receiving their compulsory annual inspection. The usage of custom oversized trucks is common in Indonesia in order to reduce the cargo logistic fees across the islands (Tribunnews, 8 February 2022). According to the Ministry of Public Works and Public Housing, such trucks forced the government to spend over 43 trillion rupiah (3 billion USD) in yearly road repairs (Tribunnews, 8 February 2022). Damaged roads are a constant grievance in Indonesia that have regularly triggered demonstrations across the country.

Meanwhile, demonstrations were reported across the region last week in response to Russia’s invasion of Ukraine. Demonstrations in solidarity with Ukraine were reported in Japan, Malaysia, Taiwan, Thailand, Australia, and New Zealand.