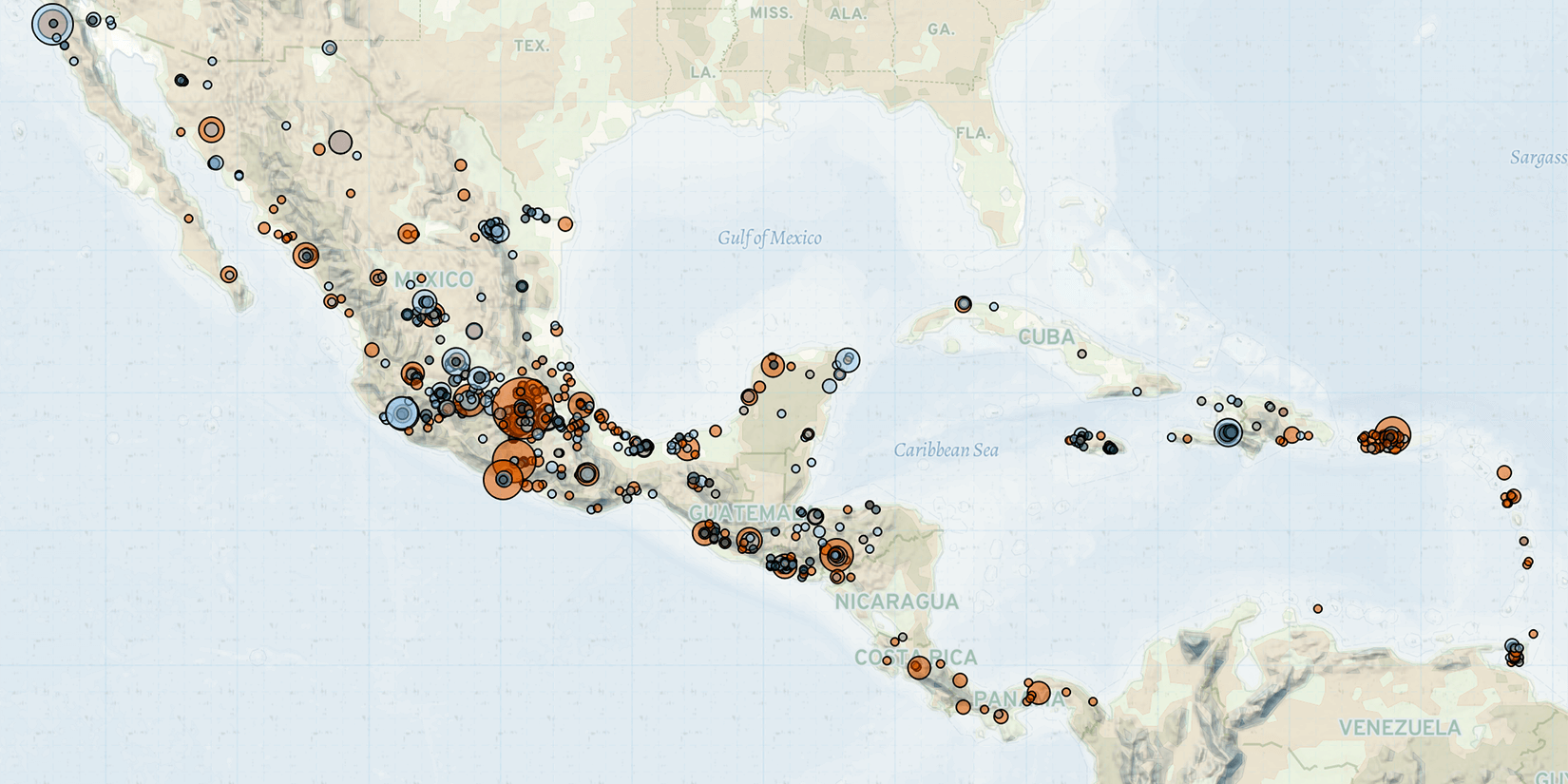 Last week in Mexico, Central America, and the Caribbean, gang-related attacks prompted an increase in violence against civilians, driven by worsening violence in Haiti, Mexico, and Guatemala. In Haiti, kidnapping and attacks against civilians by gang members increased last week in Port-au-Prince. Meanwhile, police deployed deadly force against demonstrators demanding adjustments in the minimum wage. In Mexico, violence continues to increase in Colima and Nuevo León states amid the ongoing conflicts between criminal groups. In Guatemala, gang attacks against taxi drivers spiked last week. In Trinidad and Tobago, people created barricades to protest poor road conditions and call for improved access to water.

In Haiti, a rising number of gang-perpetrated kidnappings contributed to the 33% increase in violence in the country last week relative to the past month flagged by ACLED’s Conflict Change Map, which first warned of increased violence to come in the country last month. Among the victims of abductions were some high-profile victims, including an evangelical pastor, businessmen, and government officials. Meanwhile, three Village de Dieu gang members were killed when police intervened in the attempted kidnapping of a student in Port-au-Prince on 21 February. On the following day, an officer of the Central Bank of Haiti was killed by gang members as he tried to escape during an attempted kidnapping. The elevated level of kidnappings comes despite authorities announcing a series of operations to curb insecurity and gang violence in the country (Gazette Haiti, 9 February 2022).

Meanwhile, police used deadly force in a crackdown against demonstrators demanding a rise in the minimum daily wage last week. On 23 February, factory workers affiliated with the National Society of Industrial Parks (SONAPI) barricaded roads in Port-au-Prince, demonstrating against the government’s announcement of a new minimum daily wage, which they deem to be insufficient. Police deployed tear gas and opened fire on demonstrators, killing a journalist covering the events and injuring two other journalists. Following the demonstration, Prime Minister Ariel Henry condemned the actions of police, while the Judicial Police and the General Inspectorate of National Police announced investigations into the case (CPJ, 24 February 2022). Local human rights organizations have denounced the abuses committed by police since the outbreak of wage-related demonstrations, which began the second week of February (RNDDH, 21 February 2022).

In Mexico, violence continued to increase last week in Colima state, with attacks by armed suspects against civilians resulting in at least 13 fatalities. These trends contribute to the 207% increase in violence in Colima last month relative to the past year flagged by ACLED’s Subnational Threat Tracker. The tool first warned of increased violence to come in Colima last month. Violence spiked in February following the breakdown of an alliance between the Los Mezcales gang and the Jalisco New Generation Cartel (CJNG), which controls local drug markets and the import of drug supplies that arrive through Manzanillo Port (El Universal, 24 February 2022). The continued violence comes as the government deployed more than 900 military officers to the region last week (Infobae, 24 February 2022), having begun deployments in early February.

Similarly, in Nuevo León state, violence against civilians intensified last week, with several multiple-fatality attacks perpetrated by gangs. Following separate gang killings in El Carmen and Santa Catarina municipalities, gang members abandoned the tied-up bodies of a total of nine people bearing signs of torture. Seventeen further deaths were recorded during clashes and attacks involving rival gangs last week, resulting in the highest number of monthly fatalities in Nuevo León since February 2019. According to authorities, these attacks have been prompted by the new arrival of criminal groups from Sinaloa, which have begun contesting control of routes for the trafficking of drugs, migrants, and weapons that connect with the US border (Milenio, 25 February 2022; Infobae, 24 February 2022). The CJNG, the Noroeste Cartel, and the Gulf Cartel operate in Nuevo León, with recent reports also suggesting the presence of the Sinaloa Cartel in Nuevo León as well (El Proceso, 3 December 2021; Infobae, 5 August 2021). Following these incidents, 500 military officers were sent to reinforce security in Nuevo León as part of the Safe Monterrey 2022 plan. The Safe Monterrey 2022 plan was launched in January 2022 to fight increasing insecurity in the state (El Heraldo de Mexico, 24 February 2022).

In Guatemala, extortion-related attacks against taxi and bus drivers spiked last week, contributing to the 78% increase in violence in the country over the past week relative to the past month that is flagged by ACLED’s Conflict Change Map. Most of the attacks occurred in Guatemala department, where at least five taxi drivers were killed by gang members. Extortion is considered one of the main sources of income for gangs in the country, with fees forced upon shop owners or providers of public transport in exchange for security (InSight Crime, 7 February 2022). Local organizations have reported an increase in extortion activity in January 2022 compared to the month prior (República, 23 February 2022).

In Trinidad and Tobago, residents of several villages in Princes Town region staged demonstrations on 21 February, blocking roads with burning barricades to demand the repair of local roads and improved access to water. Demonstrators, supported by some members of parliament, denounced the government’s failure to solve these issues. Meanwhile, unidentified groups carried out multiple attacks — believed to be gang-related — on civilians last week, killing two people. These trends contribute to the 111% increase in violence in Trinidad and Tobago last week relative to the past month flagged by ACLED’s Conflict Change Map, which first warned of increased violence to come in the country last month.