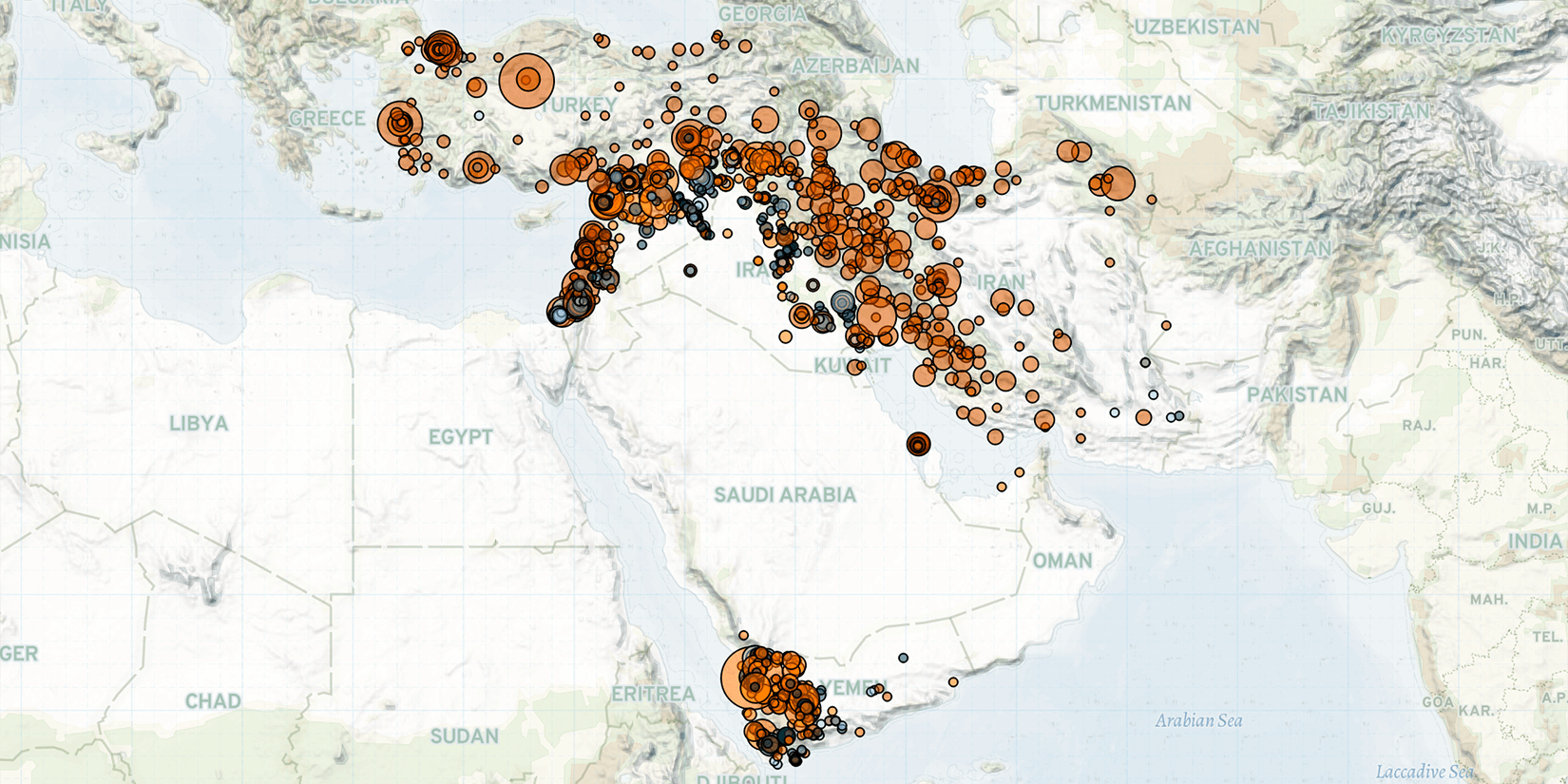 Last week in the Middle East, overall levels of political violence continued to decrease in Yemen, after a significant drop in violence the week prior. In Saudi Arabia, a Houthi drone attack resulted in civilian casualties. In Syria, the Syrian regime escalated its shelling of Idleb province. Meanwhile, Iraq experienced a second week of unusually low levels of violence. In Palestine, Israeli security forces violently suppresed Palestinians demonstrating against settler activity in East Jerusalem’s Shaykh Jarrah neighborhood, while Israeli forces killed a Palestinian teenager as he attempted to attack Israeli soldiers in the West Bank. In Iran, teachers protested across the country to demand better job conditions.

In Yemen, political violence in Marib governorate reached its lowest levels last week since June 2021. While the reasons behind this drastic decrease in clashes between Houthi and pro-Hadi forces are unclear, such reductions in violence in the past have been the result of both camps reorganizing to prepare for new offensives. In Taizz governorate, clashes between Houthi and pro-Hadi forces erupted on the eastern outskirts of Taizz city. The clashes were accompanied by intensive shelling of residential areas by both parties, which resulted in several civilian injuries. In Hajjah governorate, political violence remained at high levels last week with no report of territorial changes, after Houthi forces fended off a pro-Hadi offensive the week prior. The reignition of these fronts in recent weeks has led to a 875% in violence in Hajjah governorate in the last month relative to the past year flagged by ACLED’s Subnational Threat Tracker. Elsewhere in Yemen, clashes erupted between Houthi and anti-Houthi forces in Ad Dali governorate, leading to a 140% increase in violence in the last week relative to the past month flagged by ACLED’s Subnational Surge Tracker. The Subnational Tracker had warned of violence to come in Ad Dali and Hajjah governorates last month.

Meanwhile, in and around Sanaa city, last week was the first week since November 2021 that the Saudi-led coalition conducted no airstrikes on either Amanat al Asimah or Sanaa governorates. This lack of activity came despite a Houthi drone attack in Saudi Arabia last week. Saudi forces intercepted the drone over Jizan airport in the south of the country, with drone fragments injuring 16 civilians, including three critically (Saudi Press Agency, 21 February 2022; Saudi Press Agency, 21 February 2022). These governorates are usually targeted in retaliation for Houthi cross border attacks. The attack did, however, prompt the Saudi-led coalition to target Houthi sites in Al Bayda governorate. The minimal response in terms of retaliatory airstrikes on Yemen last week is unusual.

In Syria, regime forces increased their shelling of Idleb province by one-third last week, with activity concentrated on Kafr Nobol, Ehsem, and Ariha districts. Elsewhere, attacks by unidentified militants drove an increase in violence targeting regime forces in Homs province last week, including an attack in the Tadmor desert and the detonation of landmines in the Jabal Amour area. The latter attack killed four regime fighters. These attacks contributed to a 100% increase in violence in Homs last week relative to the past month; ACLED’s Subnational Surge Tracker first warned of increased violence to come in Homs last month.

Meanwhile, Israel continued cross-border strikes into Syria for a second week in a row. Israeli shelling targeted regime forces, Hezbollah, and pro-Iranian militia positions in Quneitra and Rural Damascus provinces. This shelling resulted in the deaths of seven pro-regime fighters in Rural Damascus and the destruction of weapons depots near Damascus International Airport. Elsewhere, Turkish shelling and airstrike events in Aleppo, Ar Raqqa, and Al Hasakeh provinces declined by half last week. Despite this, Turkey conducted fresh drone strikes targeting the Syrian Democratic Forces (QSD)-affiliated Menbij Military Council in Jarablus district, Aleppo province, having not conducted strikes in Jarablus the week prior.

In Iraq, Turkey reduced airstrike activity in Duhok province, while maintaining the same level of strikes in Ninewa and Erbil provinces. Violence in Ninewa province is common, but has recently become more volatile due to increased Turkish artillery and airstrikes, resulting in a shift from a place of ‘consistent risk’ to an area of ‘extreme risk’ per ACLED’s Volatility and Risk Predictability Index.

The overall level of political violence in Iraq remained at reduced levels last week for the second consecutive week. Despite this, violence increased in Thi Qar province by 146% relative to the past month, as flagged by ACLED’s Subnational Surge Tracker; unknown militants have conducted a series of explosive attacks in the province, including an attack on the home of a member of the Emtidad Movement Party.

Last week in Palestine, Palestinians demonstrated against Israeli settlers in East Jerusalem, and a Palestinian rioter was killed by Israeli security forces in Al Khadir town. Amid ongoing tensions in the Shaykh Jarrah neighborhood, Israeli police forces attempted to disperse hundreds of Palestinian demonstrators, beating and pushing several demonstrators, resulting in injuries (Palestine News and Information Agency, 25 February 2022)​​. Tensions in Shaykh Jarrah began to increase two weeks ago after a far-right Israeli politician set up an office on land belonging to an evicted Palestinian family. In the West Bank, Israeli forces shot and killed a 14-year-old Palestinian last week in Al Khadir after he and two other Palestinians attempted to throw Molotov cocktails at the soldiers. ACLED’s Conflict Change Map first warned of increased violence to come in Palestine last month.

In Iran, teachers across the country organized hundreds of protests last week to demand the government do more to improve their working conditions. The Coordinating Council of Teachers Syndicates in Iran mobilized its members to protest in more than 100 locations in the country. The protesters demand the government to implement a salary ranking plan, to introduce pension payment equalization, and to provide more full-time contracts for educational workers, among other similar demands (HRANA, 20 February 2022). Even though the protests were peaceful, Iranian security forces intervened in several of them and arrested protesters in Karaj, Shiraz, Yasuj, and Nurabad.