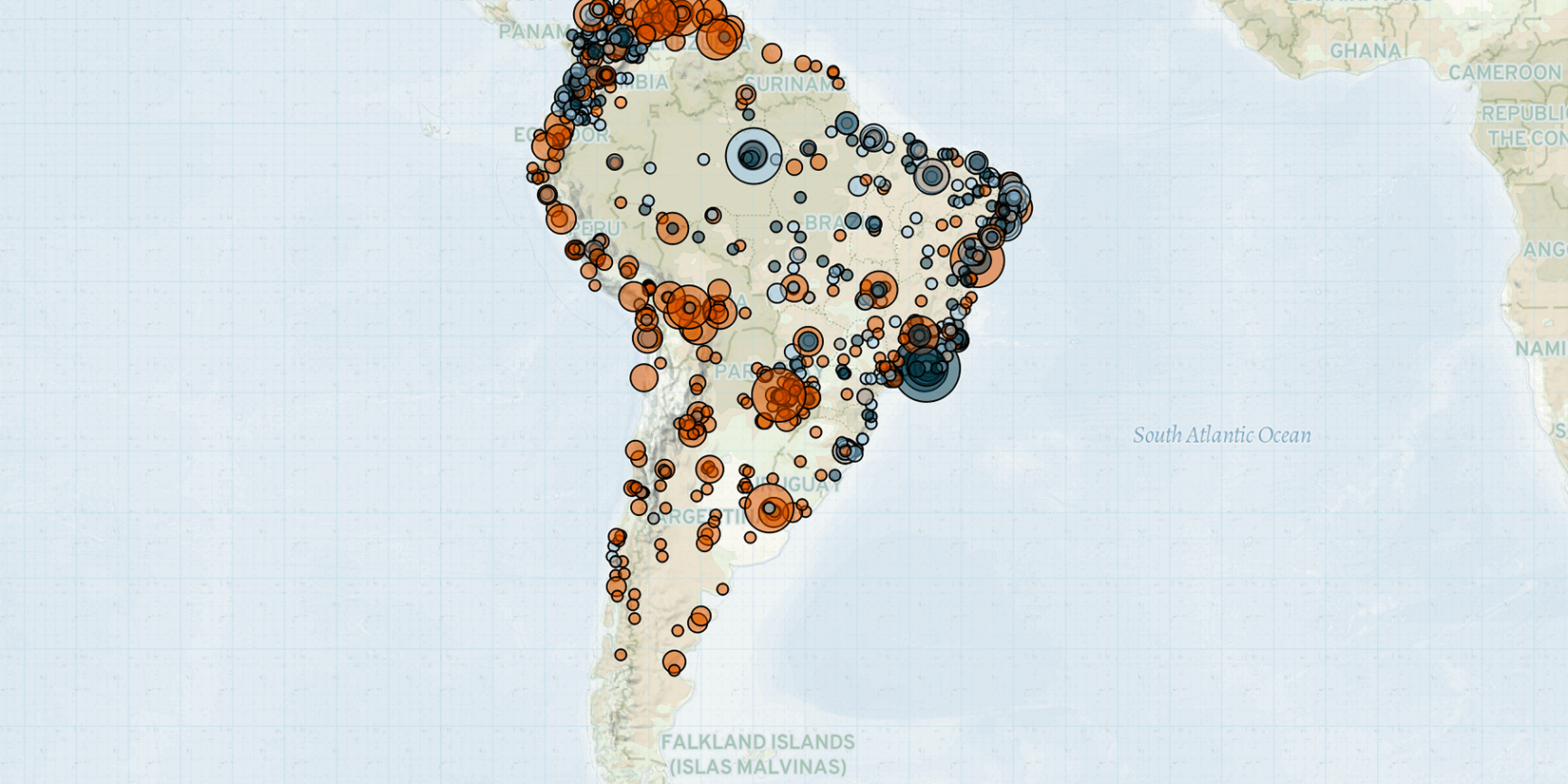 Last week in South America, opponents of former President Evo Morales took to the streets in Bolivia to mark the anniversary of the unsuccessful 21 February 2016 referendum, which would have removed presidential term limits. In Brazil, a prison riot broke out in a detainment facility in Bahia, and violent attacks perpetrated by the First Capital Command (PCC) carried out deadly attacks in São Paulo. In Venezuela, nationwide protests were held to repudiate human rights violations by Nicolás Maduro’s government. Furthermore, the National Liberation Army (ELN) launched a three-day ‘armed strike,’ affecting both sides of the Venezuelan-Colombian border. As part of the strike, the ELN blew up a bridge, set fire to vehicles, blocked roads, and set off bombs across areas in Colombia where the group operates. Meanwhile, clashes between the ELN and dissidents of the Revolutionary Armed Forces of Colombia (FARC) continued to be reported last week, resulting in the killing of 23 FARC dissidents.

In Bolivia, opponents of former President Morales, led by the 21F Movement, took to the streets to commemorate the anniversary of the failed 21 February 2016 constitutional referendum. The referendum would have removed presidential and vice presidential term limits, allowing Morales to run for a third consecutive term, following a decade-long stint in office (BBC, 24 February 2016). While the referendum was rejected by a majority of citizens (BBC, 24 February 2016), Morales still ran for president that same year. Demonstrations were staged across six different departments, including in La Paz, where supporters of the governing Movement for Socialism (MAS) party threw firecrackers at demonstrators.

In Brazil, a riot broke out in a detainment facility in Salvador city, Bahia state, on 20 February. Five prisoners were killed and 18 others were injured in the violence, which was motivated by rivalries between drug trafficking groups, including the Red Command (CV). Other prisoners attempted to escape the facility during the riot, but they were contained by prison guards and the Special Operations Battalion of the military police. The riot prompted the firing of the state penitentiary department secretary, while authorities launched a civil police investigation into weapons smuggling at the facility (G1, 22 February 2022). Brazil has struggled to contain prison violence for decades, driven by overcrowding and the strength of drug trafficking organizations in prisons (UOL, 22 August 2018). Rival gangs have divided up prison facilities and actively recruit new members in exchange for protection and welfare support for their families (El País, 19 July 2020).

Elsewhere in Brazil, the PCC continued its recent campaign of violent attacks in the state of São Paulo last week, resulting in two deaths. Authorities believe these incidents might be linked to several recent executions carried out by the PCC due to internal disputes, although the connection has not yet been confirmed (R7, 18 February 2021). The killings follow the execution of two high-ranking leaders of the PCC, Anselmo Bechelli Santa Fausta (alias: Cara Preta or Magrelo) and Antônio Corona Neto (alias: Sem Sangue), by hitmen in the East Zone of São Paulo city on 27 December 2021. According to authorities, Anselmo, who was responsible for coordinating international drug trafficking transactions, was killed after threatening PCC-affiliated businessmen over a failed investment (SBT News, 20 February 2022). ACLED’s Subnational Surge Tracker first warned of increased violence to come in São Paulo last month, when the first PCC-related killings were reported.

Separately, two people were killed in clashes with military police forces in the state of Paraná. Located in the tri-border area along Brazil, Argentina, and Paraguay, the state of Paraná has become a hub for drug trafficking (R7, 29 October 2021). These trends contribute to the 140% increase in violence in Paraná last week relative to the past month flagged by ACLED’s Subnational Surge Tracker, which first warned of increased violence to come in Paraná last month. Likewise, five people were killed in clashes and attacks related to drug trafficking disputes in the states of Amapá and Ceará; ACLED’s Subnational Surge Tracker first warned of increased violence to come in both states last month.

Last week in Venezuela, the Encuentro Ciudadano (EC) political party led nationwide protests on 24 February, to repudiate alleged election irregularities and human rights abuses committed by President Maduro’s administration. On 21 November 2021, a European Union election observation mission stated that there were arbitrary disqualifications of political opponents who sought to run for office, partisan use of state resources in the campaign, unequal access to the media during campaigning, government blockage of websites, and a lack of judicial independence (European Union, 21 November 2021). Organizers state that the protests are part of the larger ‘Save Venezuela’ movement, which has attempted to unify many of the country’s opposition parties and politicians under a single banner, opposed to the Maduro regime (Diario las Americas, 12 February 2022).

Meanwhile, the ELN closed off many informal river crossings on the Venezuelan-Colombian border as part of an ‘armed strike’ (paro armado) launched by the group on 23 February (El Nacional, 24 February 2022). The strike took place from 23 to 26 February 2022 and has negatively impacted many local economies in both Venezuela and Colombia (Cronica Uno, 24 February 2022). The ELN’s three-day armed strike affected eight different departments in Colombia, as well as Apure state in Venezuela. The strike included restrictions on movement and trade across rural areas where the ELN operates (Caracol Radio, 23 February 2022). The group also blew up a bridge in the César department, halting one of Colombia’s most important traffic routes, connecting the inner part of the country with the Caribbean coast. This contributed to the 380% increase in violence in César over the past week relative to the past month, as flagged by ACLED’s Subnational Surge Tracker.

Amid the ELN’s strike, multiple clashes between armed groups were reported last week. In the Cauca department, FARC dissidents clashed with the ELN in a five-day armed conflict in Guapi municipality. In the Arauca department, 23 FARC dissidents, including the leader of the 10th FARC dissident front, were killed during a military offensive. This violence contributes to the 219% increase in violence in Arauca last month relative to the past year flagged by ACLED’s Subnational Threat Tracker.  ACLED’s Subnational Surge and Threat Trackers first warned of increased violence to come in both Arauca and Cauca last month.

Elsewhere in Colombia, three former FARC fighters — including a candidate for the Comunes party — were killed by unknown shooters in separate attacks in the Putumayo and Valle del Cauca departments. One of the victims killed was a running candidate of the Comunes party. Violence in Valle del Cauca is both common and highly volatile; it is considered an area of ‘extreme risk’ by ACLED’s Volatility and Predictability Index. These violent events contributed to the 38% increase in violence in Colombia last month relative to the past year flagged by ACLED’s Conflict Change Map, which first warned of increased violence to come in the country last month.