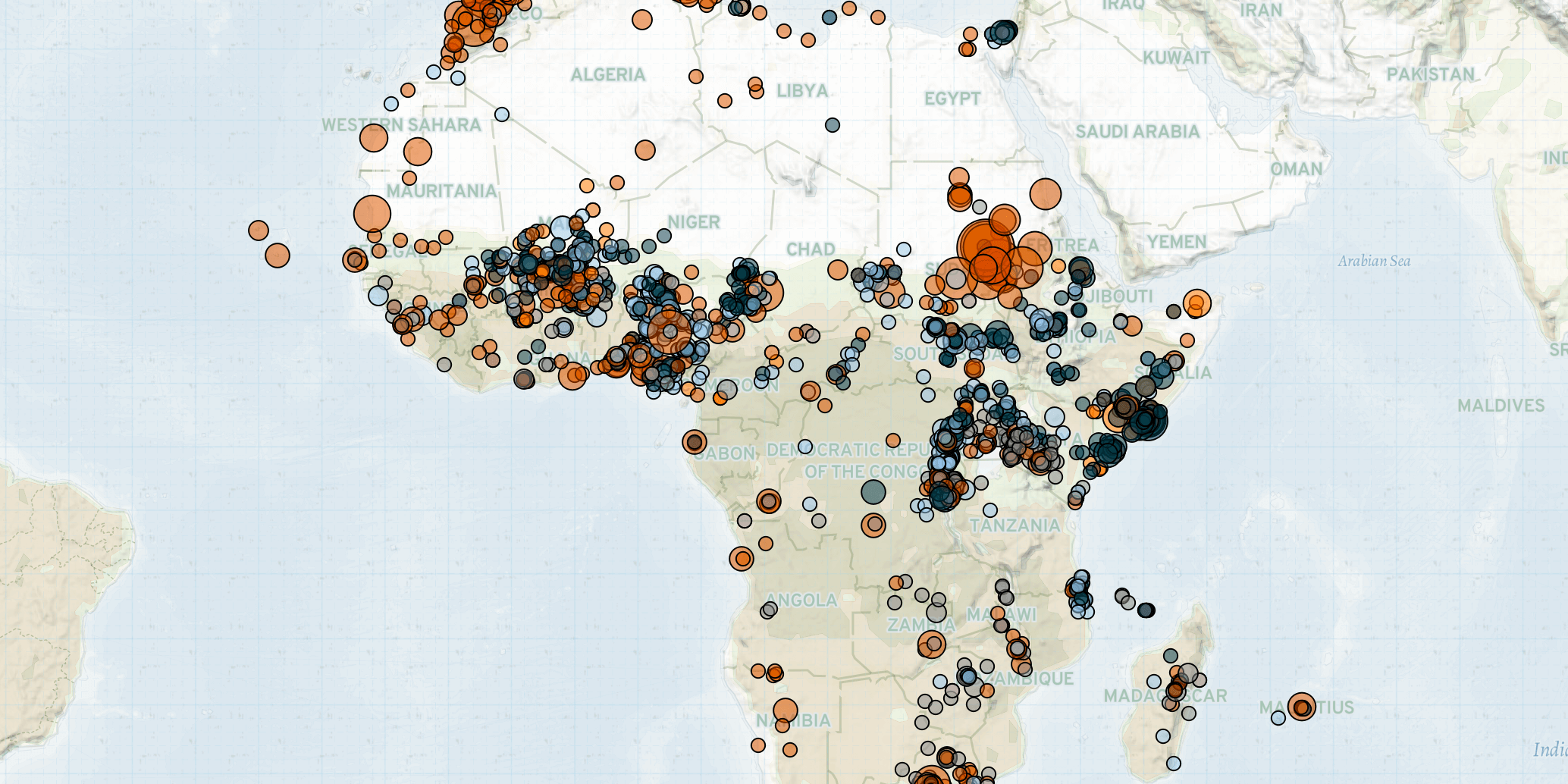 Last week in Africa, two rival governments emerged in Libya; clashes between gunmen and a Bor Dinka militia resulted in numerous fatalities in South Sudan; JNIM carried out deadly attacks on army bases in Burkina Faso and Mali; and security forces regained territory from ADF in ​​the Democratic Republic of Congo.

In Burkina Faso, JNIM carried out attacks against government forces, volunteer fighters (VDP), and civilians in the Sahel, East, North, Center-North, Center-East, and Boucle du Mouhoun regions. JNIM militants also used suicide car bombs during attacks on an army base in Toeni, Boucle du Mouhoun region. Although military forces repelled the attack, numerous casualties contributed to the over 50% increase in violence last month relative to the past year flagged by ACLED’s Conflict Change Map. In response, the Burkinabe Air Force conducted air strikes in the Boucle du Mouhoun, East, Center-East, and South-West regions. Across the border in the southwestern Tillabery region of Niger, JNIM also carried out deadly attacks with an IED explosion in Tampena and clashed with a forest guard patrol in Tondey.

In Mali, JNIM carried out a particularly deadly attack on an army base in Mondoro, leaving scores of soldiers and militants killed. JNIM also attacked villages in the Femaye commune of the Mopti region, leading to fighting with Donso militiamen. The Greater Sahara faction of the Islamic State of West Africa Province (ISWAP) also carried out a series of attacks, notably killing five Nigerien civilians and assassinating an officer of the Movement for the Salvation of Azawad (MSA) in the Menaka region.  To counter Islamist militias, Malian Armed Forces (FAMa) destroyed militant bases in the Segou and Mopti regions.

In Egypt, violence increased in North Sinai as the Islamic State conducted multiple IED attacks against the Egyptian military forces and Union of Sinai Tribes near Bir Al-Abd and Rafah.

In Libya, parliament swore in the government of Fathi Bashagha in Tobruk, despite objections from the rivaling government led by Abdul Hamid Dbeibeh in Tripoli (Crisis Group, 3 March 2022). Militias affiliated with the Government of National Unity (GNU) kidnapped two ministers before their formal appointment into the Bashagha-led cabinet.

In Nigeria, military forces destroyed ISWAP Lake Chad faction camps in Damboa, and the Multinational Joint Task Force (MNJTF) intercepted logistics supplies of Islamist militants in Kirawa. Violence by gunmen in the northwestern states continued, with the majority of violent events taking place in Niger state where military airstrikes and ground operations against gunmen resulted in hundreds of fatalities. These events contributed to the 196% increase in violence in Niger state last month relative to the past year flagged by ACLED’s Subnational Threat Tracker.

In South Sudan, escalating tensions rose between Bor Dinka pastoralists from Jonglei state and local communities. Nearly 30 were killed during clashes between unidentified gunmen and Bor Dinka militia in Magwi and Torit counties of Eastern Equatoria state. The clashes prompted the Bor Dinka to engage in reprisal attacks in the nearby areas of Kit and Abara, resulting in further killings. This violence contributed to the 25% increase in violence in South Sudan last week relative to the past month, as flagged by ACLED’s Conflict Change Map. In neighboring Sudan, security forces killed three more protesters as nationwide demonstrations against the military coup continued, while several others were injured in Port Sudan, Kosti, and Medani.

In Kenya, security forces (KDF) ambushed elements of Al Shabaab in Lamu county as the militants attempted to cross the border. In the meantime, pastoralist militias attacked civilians in Elgeyo Marakwet, Baringo, and Isiolo counties. In Nairobi, different presidential candidates pelted stones at one another during a conference of the Orange Democratic Movement (ODM). Electoral violence trends were also observed in Zimbabwe, where suspected Zimbabwe African National Union – Patriotic Front (ZANU-PF) supporters attacked members of the Citizen Coalition for Change (CCC) during a rally in Kwekwe (Amnesty International, 28 February 2022).

In the Democratic Republic of Congo, rebel groups continued to attack civilians in the eastern part of the country. The Allied Democratic Forces (ADF) killed scores of people in North Kivu and Ituri provinces. The attacks triggered a retaliatory response by the Congolese armed forces (FARDC), which resulted in over a dozen militant fatalities. The Congolese and Ugandan armies regained control of several ADF bases in southern Irumu territory in Ituri province. Also, in Ituri, the FARDC killed over thirty elements of the Cooperative for the Development of Congo (CODECO) during clashes in Djugu territory.

Finally, as the Russian invasion of Ukraine entered its second week, several pro-Ukraine demonstrations were observed once more in Mauritius and Southern Africa, with new ones taking place in Cape Verde and Kenya, whilst a pro-Russia demonstration was reported in the Democratic Republic of Congo.