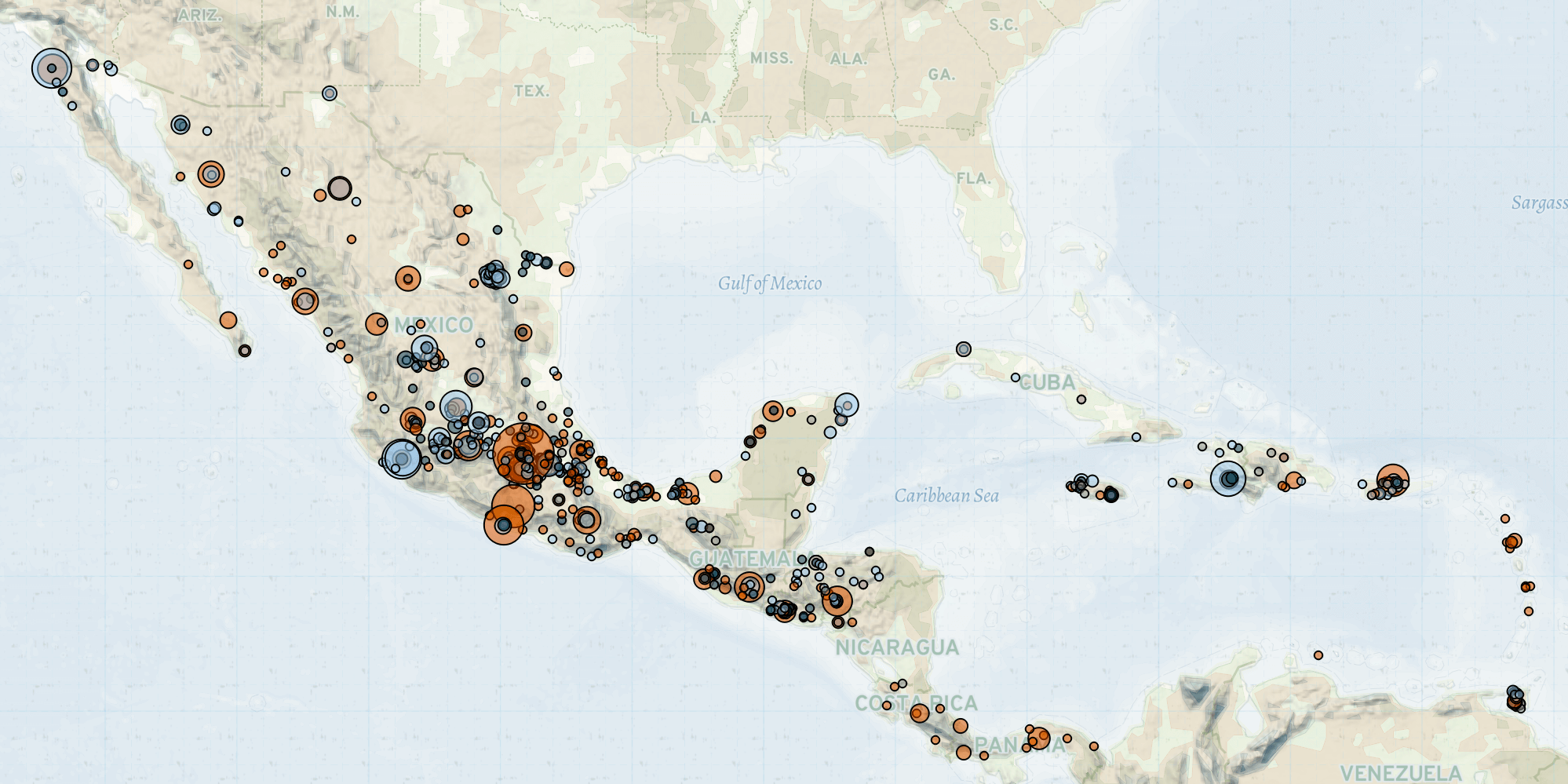 Last week in Mexico, Central America, and the Caribbean, violence remained high amid gang-related attacks and clashes in Mexico, Honduras, Haiti, and Puerto Rico. In Mexico, factional disputes within the Jalisco New Generation Cartel (CJNG) resulted in at least 17 killings in Michoacán state, while members of the Gulf Cartel clashed with police officers and set several roadblocks in Tamaulipas state. Elsewhere, armed suspects killed a journalist in Zacatecas state, amid a wider spike in targeted attacks on journalists this year. In Honduras, Haiti, and Puerto Rico, insecurity continued to increase with clashes between rival gangs and police as well as extortion-related attacks against civilians. Meanwhile, demonstrations against the Russian invasion of Ukraine were held in Costa Rica, Panama, Guadeloupe, and Mexico.

In Mexico, CJNG members carried out a deadly attack on a group of people who were attending a funeral in San José de Gracia, Michoacán on 27 February. Though authorities failed to locate any bodies following the attack, reports suggest that at least 17 people were killed, including a leader of a faction of the CJNG (BBC, 1 March 2022). Further investigations suggest that the attack was related to internal conflicts between local leaders of the CJNG that have previously disputed control of the area (Excelsior, 1 March 2022). In Michoacán, the CJNG has expanded its operations to carry out extortions and to control the production and trafficking of drugs, amid fighting with other local criminal groups, like Los Viagras and La Familia Michoacana (Infobae, 13 January 2022).

This attack follows an outbreak of violence in February in Colima state, which is also related to internal divisions of the CJNG. In Colima state, for the fourth consecutive week, violence continued at high levels amid the ongoing conflict between the CJNG and their former allies, the Los Mezcales gang (Infobae, 15 February 2022). Last week, attacks against civilians by gang members resulted in 14 deaths, most of them recorded in the city of Colima. These trends contribute to the 298% increase in violence in Colima last month relative to the past year flagged by ACLED’s Subnational Threat Tracker. The Subnational Tracker first warned of increased violence to come in Colima last month.

Elsewhere, in Tamaulipas state, the Los Metros gang — a faction of the Gulf Cartel — erected roadblocks and carried out acts of vandalism in response to anti-gang operations in the state, as well as to the arrest of a Gulf Cartel leader on 27 February in Ciudad de Mexico (Infobae, 27 February 2022). Los Metros gang members destroyed surveillance cameras and set vehicles on fire to block roads in several parts of Gustavo Diaz Ordaz, Camargo, Miguel Alemán, and Reynosa municipalities. Following these incidents, people protested in Reynosa against state police operations, accusing police of the abuse of force and demanding federal government intervention to address insecurity in Tamaulipas. Violence continued throughout the week with more reports of vandalism and a clash between state forces and members of the Gulf Cartel on 3 March that resulted in four deaths. Since 2018, the Group of Special Operations (GOPES) of the Tamaulipas state police force have engaged in anti-gang security operations with the support of US security agencies (El Universal, 4 August 2021). Multiple factions of the Gulf Cartel and other criminal groups operate in this state, controlling the routes for the trafficking of weapons, migrants, and drugs into the US (InSight Crime, 6 October 2021).

Meanwhile, unidentified armed suspects shot and killed a journalist in Fresnillo, Zacatecas state on 4 March. The victim covered events on insecurity and criminality for a local newspaper and also worked as a taxi driver (Europa Press, 7 March 2022). While the state attorney general announced investigations into the attack (El País, 5 March 2022), local organizations have previously denounced the failure of authorities to carry out proper investigations, leaving most of these attacks unpunished (EFE, 12 February 2022). The latest killing comes amid a spike in targeted attacks against journalists in Mexico. Since the beginning of 2022, ACLED records at least one attack against journalists per week, resulting in the deaths of seven journalists.

In Honduras, clashes between rival gangs, and gang attacks against taxi drivers, contributed to the 29% increase in violence in the country over the past week relative to the past month that is flagged  by ACLED’s Conflict Change Map. Most of the violent events recorded last week occurred in Cortés department. In one notable event, Barrio-18 gang (B-18) members were arrested by police officers while carrying the bodies of four members of the Mara Salvatrucha (MS-13) who were killed in a previous clash. Gang attacks on civilians in Cortés department also left four people dead, including a taxi driver, contributing to the 100% increase in violence in Cortés over the past week relative to the past month, as flagged by ACLED’s Subnational Surge Tracker. Violence against taxi and bus drivers remained high last week with further attacks in Yoro and Francisco Morzan departments. In Francisco Morzan, gang members set fire to four buses and killed two taxi drivers in separate attacks. Such incidents have prompted strikes by drivers in different sectors of the capital Tegucigalpa and other cities, as drivers demand greater security from the government (El País.hn, 28 February 2022). Gang attacks targeting bus and taxi drivers in Honduras are often related to extortions, which are one of the main sources of income for local criminal groups (La Prensa, 22 February 2022)

In Haiti, insecurity driven by an increase in kidnappings by gang members continued last week.  Unidentified suspects abducted two executives of  Radio Télé Caraïbes during separate attacks in Port-au-Prince. During one of the abductions, the kidnappers escaped in a vehicle with state service plates. Similarly, armed men dressed as police officers broke into a private medical practice in Port-au-Prince and kidnapped two doctors. ACLED’s Conflict Change Map first warned of increased violence to come in Haiti last month. Amid recent attacks in which gang members have posed as police officers, police have issued new measures to better identify officers, including the prohibition of accessories altering police uniforms and the obligation of police to use official vehicles with proper identifications (Haiti Standard, 3 March 2022).

Meanwhile, also in Port-au-Prince, members of the Grand-Ravine gang clashed with police in the Mariani sector of Carrefour district on 4 March. The clash resulted in at least four deaths, including a police officer who was beheaded. Local sources suggest that the Grand-Ravine gang, as well as other gangs that operate in Martissant neighborhood, are trying to expand their control over areas along the National Route 2, which is the major transport route that connects the capital with the southern departments (Rezo Nòdwes, 5 March 2022; Reliefweb, 12 November 2021).

In Puerto Rico, gang-related clashes and attacks against civilians continued in Carolina and Ponce municipalities last week. While this violence declined slightly relative to the week prior, violence in Puerto Rico continues to be high, with violence increasing by 36% over the past month relative to the past year; ACLED’s Conflict Change Map first warned of increased violence to come in Puerto Rico last month. According to police, the recent violent incidents reported in Carolina are related to ongoing disputes between gangs that operate in this municipality and groups that control the neighboring areas of San Juan municipality (El Nuevo Día, 1 March 2022). While violence in Carolina and Ponce has not been common, it has become increasingly volatile, resulting in them both shifting from places of ‘low risk’ to areas of ‘growing risk’ by ACLED’s Volatility and Risk Predictability Index.

In Costa Rica, Panama, Guadeloupe, and Mexico, Ukrainian citizens and local residents held protests against Russia’s military invasion of Ukraine last week. In Guadeloupe, the protest was joined by Belarusian and Russian citizens who called for peace in Ukraine. In Mexico, protests were reported in six cities, including in Ciudad de Mexico, where people protested for several days throughout the week outside of the Russian embassy. The Mexican government has condemned Russia’s invasion of Ukraine and has announced its willingness to receive Ukrainian refugees, though it has refrained from imposing economic sanctions on Russia (DW, 1 March 2022).