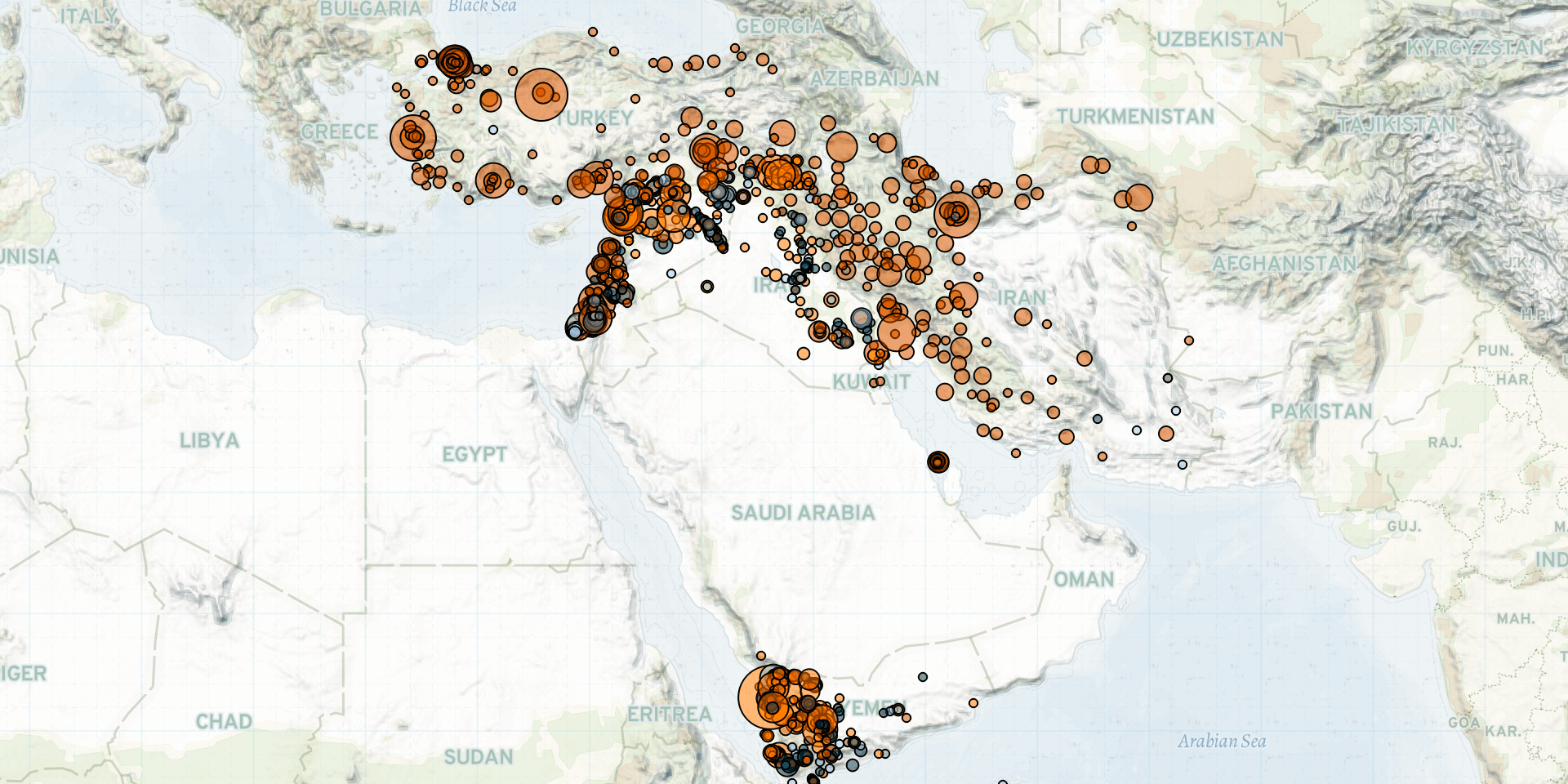 In the Middle East, political violence increased in Yemen last week after several weeks of continued decrease, although it remains at relatively low levels. Last week’s increase was primarily the result of renewed fighting in Marib governorate, while hostilities continue in Hajjah. In Syria, overall levels of violence decreased in all areas. In Iraq, violence also decreased amid increased security measures by Iraqi forces. In Palestine, protests continued in East Jerusalem’s Shaykh Jarrah neighborhood, while multiple people were killed amid exchanges of fire between Israeli forces and Palestinian gunmen in the West Bank. In Iran, retirees organized protests in over a dozen locations in the country to demand better pensions.

In Yemen, clashes between Houthi and anti-Houthi forces picked up on several fronts of Marib last week. This comes after violence in the governorate reached its lowest levels since June 2021 the week prior. Clashes between Houthi and pro-Hadi forces took place around the Balaq mountain range, as well as further south in the Harib district. Clashes between Houthi and Giants Brigades forces also resumed in Al Jubah and Harib districts last week, after a halt in clashes between the two groups for more than two weeks. These clashes were accompanied by a significant increase in Saudi-led coalition airstrike events.1Note that one airstrike event can include several airstrikes and that the number of airstrikes can greatly vary from one event to another. As ACLED is an event-based dataset, ACLED records airstrike events rather than airstrikes. This ensures consistency in the data, especially given the overall rare reporting on exact airstrike counts. ACLED’s Conflict Change Map warned of increased violence to come in Yemen last month.

In Hajjah governorate, political violence decreased for the fourth consecutive week last week, after an offensive launched by pro-Hadi and Saudi-led coalition forces in Haradh district was thwarted by Houthi forces earlier in February. Notably, amid the decrease in violence, Houthi forces captured a camp of Sudanese soldiers on the Saudi border last week. They also killed at least nine Sudanese soldiers and injured 30 others in a ballistic missile attack in the coastal Midi district. Although decreasing, continued violence in Hajjah since the failed pro-Hadi offensive has led to an 895% increase in violence in the governorate last month relative to the past year, that is flagged by ACLED’s Subnational Threat Tracker. The Tracker first warned of increased violence to come in Hajjah last month.

Elsewhere in the country, tensions rose in the south last week after Tareq Saleh, the nephew of late President Ali Abdullah Saleh and commander of the National Resistance Forces, established a political bureau in Shabwah governorate. This move was denounced by the leadership of the secessionist Southern Transitional Council (STC) (South24, 1 March 2022), and was followed by reports of STC forces moving into Shabwah (Masa Press, 28 February 2022). In Aden, the STC seized the offices of the General People’s Congress, the political party with which Saleh is affiliated, to use them as its own new headquarters (Aden al Ghad, 2 March 2022).

Elsewhere in Iraq, overall levels of violence continued to decrease last week for a second consecutive week. Increased security measures by Iraqi forces, including the Popular Mobilization Forces, likely contributed to this trend. For example, last week, Iraq deployed additional forces to known IS hotspots and erected new security fences in Salah Al Din, Kirkuk, and Diyala provinces (Shafaq News, 02 March 2022). Despite the aggregate decrease in violence, inter-tribal clashes and attacks against civilians increased significantly last week, driven by violence in Baghdad city and in Maysan and Anbar provinces. Efforts by the Iraqi police to intervene in tribal violence resulted in at least two clashes between the police and tribal militants. Last month, ACLED’s Subnational Surge Tracker warned of increased violence to come in both Maysan and Anbar.

In Palestine, tensions persisted between Palestinian locals and Israeli settlers and security forces in the Shaykh Jarrah neighborhood in East Jerusalem last week. Dozens of Palestinians protested settler activities in the neighborhood. Tensions in Shaykh Jarrah first began to increase three weeks ago after a far-right Israeli politician set up an office on land belonging to an evicted Palestinian family.

In the West Bank, Israeli forces clashed with Palestinian gunmen on three seperate occasions last week, resulting in multiple fatalities. Israeli forces exchanged fire with unidentified gunmen during operations in Jenin and Nablus cities. In addition, Israeli forces and Al Quds Brigade militants clashed in the Jenin refugee camp, resulting in the deaths of one gunman and a Palestinian civilian who was reportedly caught in the crossfire. Israeli forces entered the camp to arrest a Hamas affiliate, who eventually turned himself over to the Israeli military (Palestine News and Information Agency, 1 March 2022). Meanwhile, Israeli forces shot and killed a Palestinian man near Migdal Oz settlement. The soldiers reportedly shot the man because he ran away after they asked him to stop in Hebrew (Haaretz, 4 March 2022). ACLED’s Conflict Change Map first warned of increased violence to come in Palestine last month.

Lastly, in Iran, retirees protested in different locations across the country last week to demand better pensions and healthcare coverage. On 27 February, Iranian retirees gathered in at least 15 locations, calling for the Iranian government to implement a new plan to bring pension rates up to current standards of living, among other related demands.