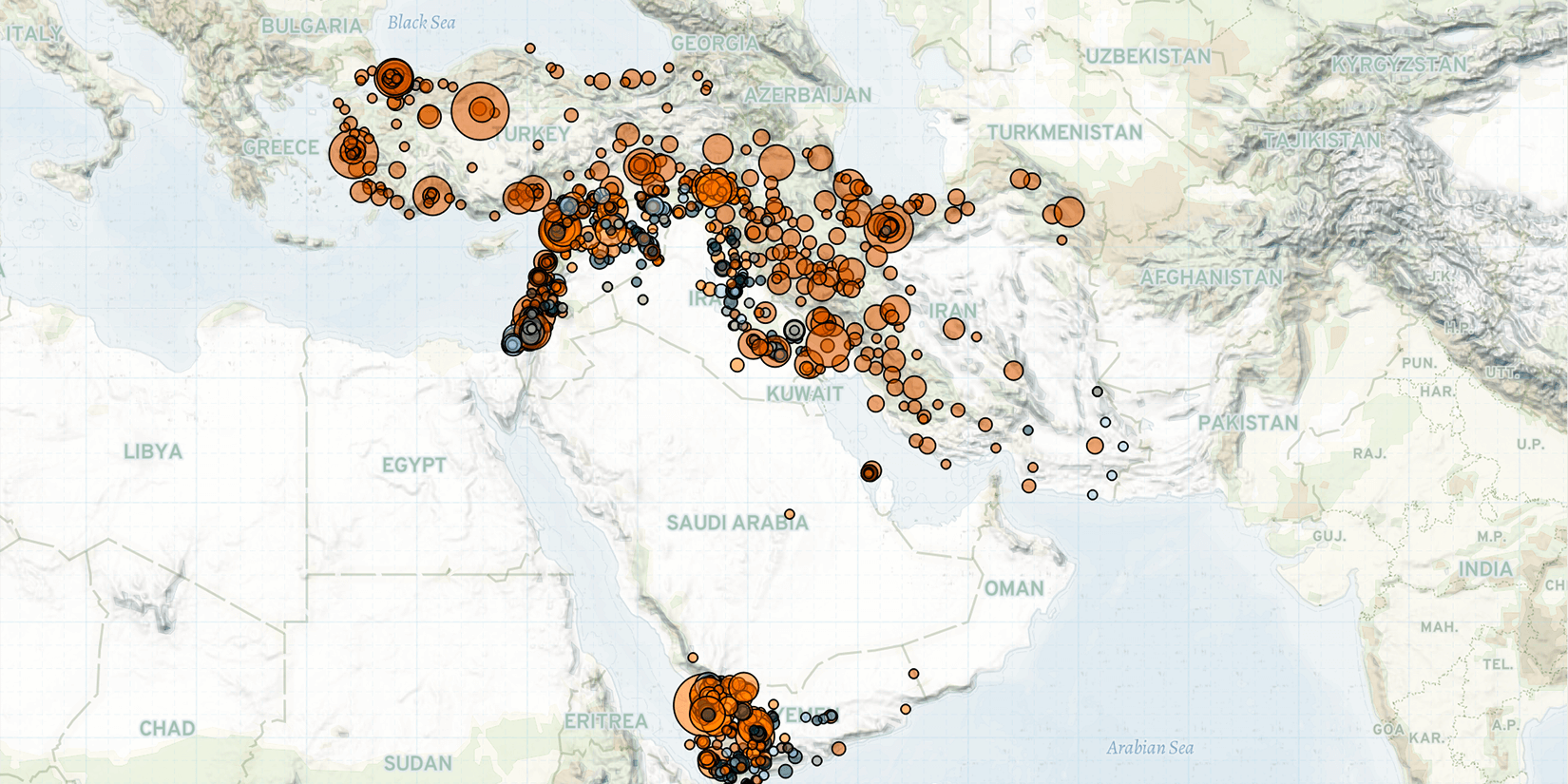 ​​In Yemen, political violence decreased in Hajjah and Marib governorates last week. Few direct confrontations were recorded between Houthi and pro-Hadi forces, with the vast majority of political violence events in these governorates being Saudi-led coalition airstrikes.1Note that one airstrike event can include several airstrikes and that the number of airstrikes can greatly vary from one event to another. As ACLED is an event-based dataset, ACLED records airstrike events rather than airstrikes. This ensures consistency in the data, especially given the overall rare reporting on exact airstrike counts. The ongoing decrease in violence comes after a failed pro-Hadi and Saudi-led offensive in early February that led to the 597% increase in violence in Hajjah governorate last month relative to the past year that is flagged by ACLED’s Subnational Threat Tracker. In Marib governorate, Houthi forces fired two ballistic missiles last week, including one that fell near the Safir oil facility.

Elsewhere in Yemen, unidentified gunmen abducted two foreign employees of Doctors Without Borders (MSF) in Hadramawt governorate on 5 March, as they were traveling towards Marib. Although responsibility for the incident has not been claimed, Yemeni security forces have claimed that the gunmen are linked to Al Qaeda in the Arabian Peninsula (AQAP) (Reuters, 6 March 2022). This comes less than a month after five UN employees were abducted in a similar incident in Abyan governorate. MSF subsequently closed some of its operations in Marib (MSF, 13 March 2022).

Meanwhile, the Houthi-run government organized a number of demonstrations within the areas under its control last week to denounce a “blockade” of ships carrying oil derivatives in the Red Sea, accusing the Saudi-led coalition of preventing the ships from reaching the port of Hodeidah (Ansar Allah, 6 March 2022). In an escalatory move, Houthi forces announced drone attacks against Aramco oil refinery facilities in the Abha, Riyadh, and Jizan regions in Saudi Arabia (Twitter @Yahya_Saree, 11 March 2022). Saudi authorities acknowledged the strike in Riyadh, which led to a fire in the refinery (Reuters, 11 March 2022). The Riyadh Aramco facility was last targeted by Houthi drones a year ago, in March 2021.

In Syria, overall levels of violence decreased last week. Russian airstrikes continued to decrease for a second consecutive week and were limited to targeting IS militants in the Al Rasafah desert of Ar Raqqa province. Meanwhile, Syrian regime shelling of opposition-controlled areas remained at the same level as the week prior. In contrast, IS militants increased combat operations, particularly in Homs province, where IS attacks on Syrian regime forces positions left 21 regime and pro-regime fighters dead in the desert of Tadmor and the Jabal Omour area. ACLED’s Subnational Surge Tracker first warned of increased violence to come in Homs in the past month.

Overall levels of violence in Iraq increased last week following two consecutive weeks of relative decline. This increase was primarily driven by the resumption of IS activity in Salah Al Din and Kirkuk provinces, which contributed to 340% and 122% increases in violence, respectively, over the past week relative to the past month, as flagged by ACLED’s Subnational Surge Tracker. Despite the overall increase in violence, Turkish airstrikes significantly decreased in Iraq last week. The decrease was most significant in the Barwari Bala and Nerwa Rekan districts of Duhok province. In contrast, the overall number of strikes targeting Amadiya district in Duhok remained similar for two consecutive weeks.