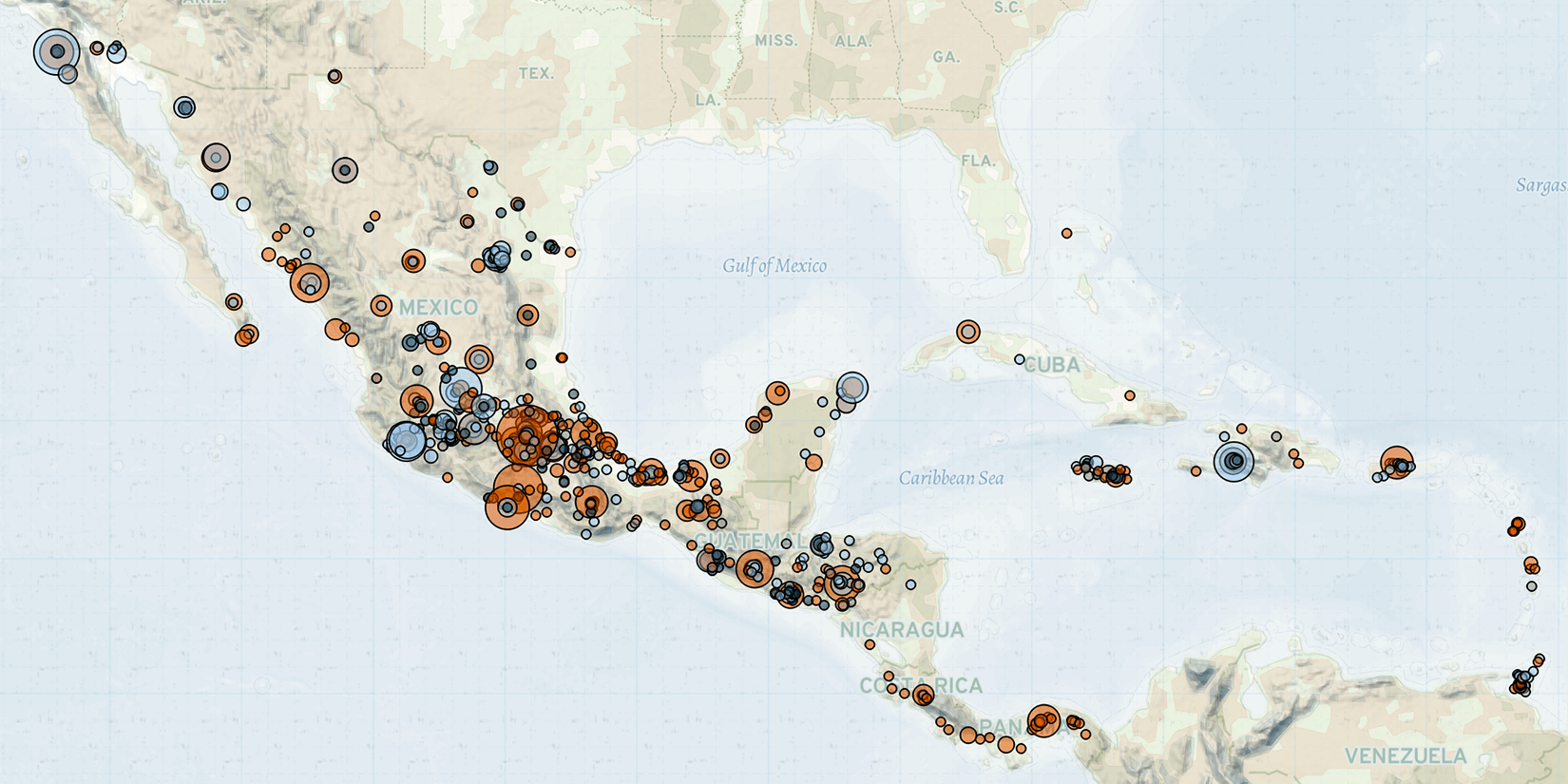 Last week in Mexico, Central America, and the Caribbean, violence levels remained high amid land-related conflicts in Guatemala and Nicaragua and gang violence in several countries around the region. An ongoing land dispute between the Ixchiguán and Tajumulco communities led to multiple clashes in Guatemala, while an Indigenous leader was killed by armed settlers in Nicaragua. In Mexico, alleged gang members continued to target journalists in Michoacán state, while gang violence increased in Baja California state. Elsewhere, the arrests of drug cartel leaders triggered outbreaks of violence in Tamaulipas and Colima states. In Jamaica and Honduras, gang attacks against civilians remained at high levels. Meanwhile, in Haiti, increasing insecurity triggered demonstrations in Port-au-Prince.

In Guatemala, members of the Ixchiguán and Tajumulco communities engaged in multiple days of fighting last week over an ongoing land dispute in San Marcos department. During the clashes on 12 March, armed members of the Tajumulco community kidnapped several residents of Villa Real village of Ixchiguán municipality, including a local leader and auxiliary mayor. The local leader was later found dead on 16 March. Two military officers patrolling the area were also injured in the violence. The escalation of conflicts between Ixchiguán and Tajumulco communities contributed to the 27% increase in violence in Guatemala last week relative to the past month flagged by ACLED’s Conflict Change Map, which first warned of increased violence to come in the country in the past month. Since the creation of Ixchiguán municipality in 1933, these communities have been engaged in a conflict over the limits between both their municipalities and farming areas (Prensa Libre, 6 January 2022). In response to last week’s clashes, the government deployed around 500 police and military officers to the area (La Hora.gt, 15 March 2022).

In Nicaragua, armed settlers tortured and killed a leader of the Mayangna Indigenous community last week and abandoned his body in the Costa Caribe autonomous region. Mayangna Indigenous authorities and a deputy of the Central American Parliament claim that the leader was targeted for his defense of communal lands that were taken by settlers (Artículo 66, 16 March 2022). Indigenous communities of the Costa Caribe region have denounced the attacks and constant threats by armed settlers, with the alleged collusion of Daniel Ortega’s government, as they seek to take Indigenous territories for mining, logging, and agricultural activities (FIDH, 29 January 2022). ACLED records dozens of attacks against Indigenous communities in Nicaragua since its coverage started in 2018.

In Mexico, violence targeting journalists continued last week, with gunmen killing a journalist in his house in Morelia, Michoacán state on 15 March. The victim was the director of a local media agency that reported on cases of state corruption and he had received previous threats against his life (ABC, 16 March 2022). Another journalist from the same media outlet was killed in January 2022. Journalists have accused both government officials involved in corruption schemes as well as organized criminal groups of carrying out such killings in the past (El Diario.es, 15 February 2022). The latest killing comes amid a spike in targeted attacks against journalists in Mexico. Since the beginning of 2022, ACLED records the deaths of at least eight journalists in targeted attacks.

Meanwhile, in Baja California state, gang attacks against civilians left at least 15 people dead, driving the 100% increase in violence in the state over the last week relative to the past month, as flagged by ACLED’s Subnational Surge Tracker. Most of the incidents occurred in the capital city Tijuana, where criminal groups dispute control of routes for trafficking of drugs, migrants, and other goods along the US border (Infobae, 12 December 2021). The Sinaloa Cartel and the Jalisco New Generation Cartel (CJNG), the most powerful criminal groups in Baja California, have been engaged in a long-standing conflict (Sin Embargo.mx, 2 June 2022).

Elsewhere, in Tamaulipas state, military officers arrested a leader of the Cartel del Noreste (CDN) during a clash in Nuevo Laredo, which left one officer dead. Following this arrest, members of the CDN carried out shootings against a military station and the US consulate in Tamaulipas, and blocked several roads with vehicles set on fire. The CDN is one of the main groups that operates in Tamaulipas, controlling drug trafficking routes into the US (El País, 14 March 2022). Similarly, military and ministerial police arrested a CJNG leader in Colima state last week, triggering gang attacks against civilians and several roadblocks across the state. This arrest comes amid an increase in violence involving the CJNG and the Los Mezcales gang — a former ally — for control of drug trafficking routes in the state (Infobae, 12 March 2022). These trends contribute to the 206% increase in violence in Colima in the past month relative to the past year flagged by ACLED’s Subnational Threat Tracker. The Tracker first warned of increased violence to come in Colima in the past month.

In Jamaica, violence intensified last week amid multiple deadly gang attacks against civilians. In Hanover, suspected gang members carried out an attack against a supermarket on 16 March, killing three people and leaving several others injured. According to authorities, the attack could be extortion-related (Jamaica Observer, 18 March 2022). While violence in Hanover has not been common, it has become increasingly volatile, resulting in a shift from a place of ‘low risk’ to being considered an area of ‘growing risk’ by ACLED’s Volatility and Risk Predictability Index.

In Honduras, violence remained at high levels last week amid attacks by armed men against civilians. Notably, in Cortés department, gunmen killed three people, including a taxi driver. Such attacks contributed to the 167% increase in violence in Cortes last week relative to the past month flagged by ACLED’s Subnational Surge Tracker. The Tracker first warned of increased violence to come in Cortes in the past month. ACLED records an increase in attacks targeting taxi and bus drivers in Honduras in the first two weeks of March, with such attacks surpassing the number of attacks in the whole month of February. Transport drivers in Cortés and other departments have stopped activities and have denounced the increase in attacks and threats by gang members demanding payments in exchange for the right to work (Contra Corriente, 16 March 2022).

Meanwhile, National Party of Honduras supporters protested on 16 March outside the Supreme Court of Justice in Tegucigalpa, over a US extradition request for former President Juan Orlando Hernández. The court approved the extradition of Hernández, who is accused of conspiracy to traffic thousands of kilograms of drugs into the US (BBC, 17 March 2022).

In Haiti, demonstrators barricaded roads throughout last week in Port-au-Prince against insecurity and demanded the release of victims of gang kidnappings. Students demonstrated for three consecutive days in Port-au-Prince, demanding the release of a school principal who was kidnapped on 11 March. Police deployed tear gas and arrested several students. Health workers also barricaded other roads of the city as part of a three-day strike in which public and private medical services stopped their activities in response to the kidnapping of doctors (Al Jazeera, 15 March 2022). Local organizations have denounced the failure of police to address insecurity (AlterPress, 14 March 2022). Last week, the director of the National Police Force appointed new directors for three police departments in response to the criticism over police inaction (Haitian Times, 15 March 2022).